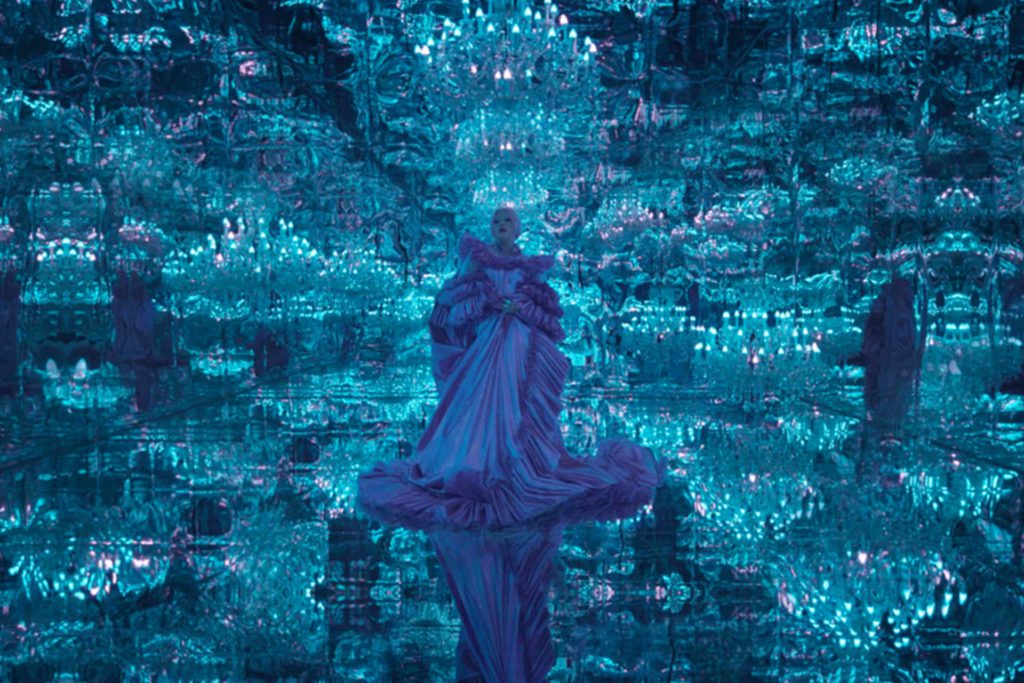 Dom Pérignon, Lady Gaga and Nick Knight team up to declare the Queendom

Lady Gaga and Nick Knight create a queendom for Dom Pérignon: «Patriarchy gave birth to the idea that the kingdom was the greatest thing of all, so we declare the queendom»

On October the first, French champagne maison Dom Pérignon has launched its collaboration with Lady Gaga, Dom Pérignon X Lady Gaga: Creative Freedom. The collaboration consists of a limited-edition collection of rosè wines – specifically the Dom Pérignon Vintage 2010 and the Dom Pérignon Vintage 2006 – bearing the artist’s name.  The campaign was announced in April 2021 with a film shot by British director and photographer Nick Knight, who had collaborated with the artist on many occasions, and it is the latest installment in the Maison’s project Power of Inspiration where artists such as Lenny Kravitz, Thomas Humery and Toiletpaper Magazine’s Maurizio Cattelan and Pierpaolo Ferrari bring their vision to the history and knowledge of Dom Pérignon. «The idea is to build correspondences and mutual inspiration between Dom Pérignon’s universe which consists of nature and wine and other universes of expression», stated Vincent Chaperon, Dom Pérignon’s Chef de Cave. «Creative freedom is our core project and the ambition we share with Lady Gaga, along with self-acceptance and the idea of hard work. Our founder was a Benedictine monk, and their motto is Ora et Labora, pray and work, and in order to reach creative freedom and push the boundaries you need to do both; you need to think, to have a vision but also to put in the hard work and that’s something that we have in common with Lady Gaga».

Dom Pérignon: the champagne of kings

The Maison, which is part of the Möet and Chandon family under the LVMH conglomerate, finds its roots in Dom Pierre Pérignon, a Benedictine monk who was appointed procurator at the Abbey of Hautvilliers in the Champagne region of France in 1668. The monk was tasked with revitalizing the abbey and this meant dealing with its principal source of income, its wines. While it would be erroneous to call Dom Pérignon the inventor of champagne, he was a pioneer in the winemaking field introducing techniques aimed at improving the quality of the wines in the region by balancing each element of the wine, correcting the imperfections, manipulating the presses to better the production of a clear white wine made of black grapes and using the intrinsic tendency of Champagne wines to retain their natural sugar in order to induce a secondary fermentation in the spring. He also revolutionized the way the champagne was stored using cork instead of wood to close the bottles, fastening them with a hemp string soaked in oil to keep them fresh and sparkling and using thicker glass to prevent any explosion of the bottles.  It’s because of these inventions introduced by the monk, that the wines produced in the abbey became so notorious in the seventeenth century that it’s said even King Louis XIV wanted them for its feasts at Versailles bringing to Dom Pérignon being known as the ‘champagne of kings’.

When at the beginning of her collaboration with Dom Pérignon Lady Gaga was told about the monk’s legend and its ties with the Sun King, the idea of a champagne made for kings resonated with her, making her answer «maybe this year it will be the champagne for queens» and thus the Lady Gaga “queendom” was born. Gaga’s queendom for Dom Pérignon was brought to life by Nicola Formichetti, creative and fashion director who has been working with the artist since 2009. Instead of focusing on the historical idea of kingdom and queendom, Formichetti created clothes that feel futuristic and modern while retaining traditional elements associated with queens and kings such as the ruffs from the Elizabethan era or the Medieval armors. All this translated in the colors of pink and purple as a homage to the colors of the Dom Pérignon rosè chosen for the collection and done using liquid-looking materials or latex in order to resemble the wine itself. The team was completed by Sarah Tanno, Lady Gaga’s make-up artist who imagined a queen whose focal point were her lips and eyes, Miro Okawara, who created for Gaga a set of nails in shades of the rosè, Frederic Aspiras, Gaga’s hairdresser who was able to combine the rigor and precision of Dom Pérignon with the artist’s untamed spirit through a combination of updos and hair extensions and Richard Jackson the choreographer who set this vision in motion. To capture this queendom Dom Pérignon and Lady Gaga relied on the mastery of Nick Knight. «He’s a visionary. His vision for the feature through art is unlike any I’ve seen before and I was hopeful about what we were going to create because in the same way that I trust Dom Pérignon to make a fantastic champagne they trusted us to make a wonderful campaign and to me that’s a true collaboration», stated Lady Gaga during our interview. What the artist wants to stress is that the campaign is the result of a collaboration, a meeting of the minds and of the stories of many people, not the point of view of a single one. «With this campaign we wanted to explore the boldness of artistry and the joy and happiness that can emerge from many minds coming together and that’s what made it not a sponsorship but a collaboration. It’s clear when you see the film that artists worked on it».

The campaign film, as imagined by Knight, sees Gaga take the stage as a queen, dressed in the shades of the Dom Pérignon vintage rosè, and be transported into a liquid and ever changing world that mimics the wine inside the bottle. The world resembles the Hall of Mirrors at Versailles – once again reinstating the link with Louis XIV and the origins of the Maison – this time though instead of a king there’s a queen who’s in charge. This is reinforced by the music playing in the background, a remixed version of Lady Gaga’s Free Woman released in April as part of the artist’s sixth album Chromatica, where the lyrics ‘be free’ are repeated several times along with the idea that one should take and fight for what it wants. The message behind the campaign was something Gaga was aware of; «I wanted this campaign to be meaningful and it is a part of a lifelong prospect of mine to be working towards dismantling systems that do not serve us and dismantling systems that cause sufferings. Patriarchy gave birth to the idea that the kingdom was the greatest thing of all so we declare the queendom».

Apart from the Dom Pérignon Vintage 2010 and the Dom Pérignon Vintage 2006, Dom Pérignon and Lady Gaga teamed up to create a limited-edition sculpture that will accompany a Dom Pérignon Vintage 2005 rosè. The pink sculpture, designed by Nicola Formichetti, ‘hugs’ the bottle as if mimicking the explosion of a rosè wine on the bottle thus playing once again with the idea of bringing what’s inside, outside as it was done by Nick Knight in the campaign’s film. All the profits of the limited-edition series, which consists of 110 bottles to be sold in private sales and showcased in flagship Dom Pérignon locations, will be given to the Born This Way Foundation, which was created by the artist and her mother Cynthia Germanotta. «The limited designed bottles are going to be auctioned off for the Born This Way Foundation that I co-founded with my mother in 2011. The donation of these limited-edition bottles will support building programmes and campaigns that increase access to resources, drive action and build community for young people». This limited-edition sculpture holds a personal meaning to Dom Pérignon’s Vincent Chaperon as well, since the rosè chosen for the bottle held by the sculpture was the first harvest he ever did at the Maison. « I started working for Dom Pérignon in 2005 with Richard Geoffroy and now I’ve been the cellarmaster for two years and I see where I want to project Dom Pérignon’s trajectory in the future, so this was a way to illustrate that and celebrate the past. It’s also a way to showcase the humanity of Dom Pérignon; it is a brand and a maison but there are people behind it and this collaboration allows us to focus on the human project and the human ambition behind the brand. Yes, this is a collaboration between Dom Pérignon and Lady Gaga but it’s also a collaboration between artists and between people».