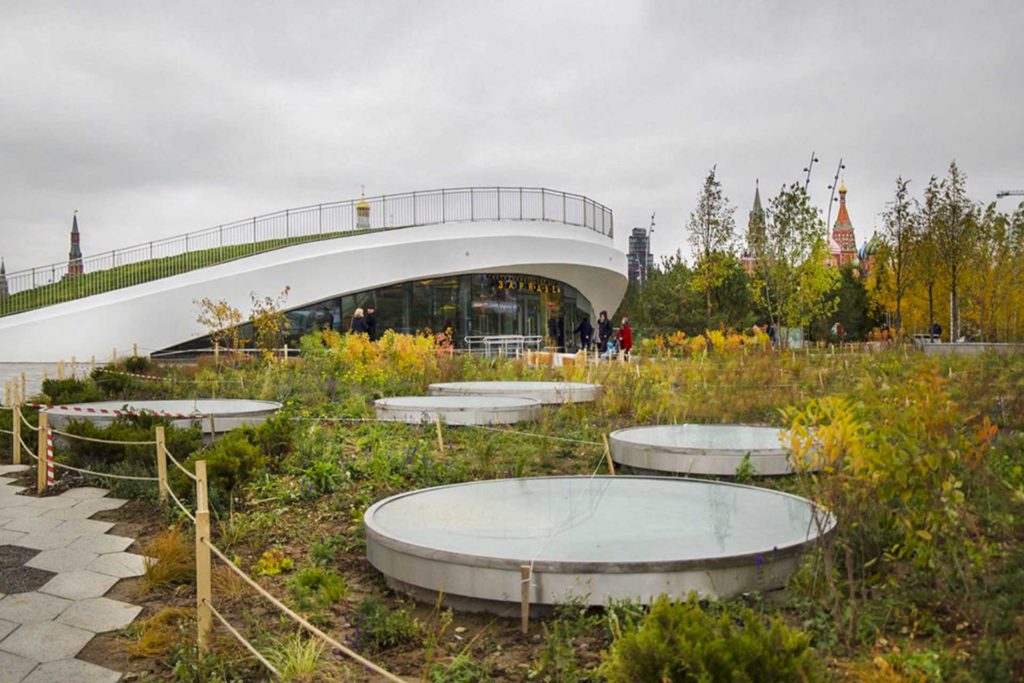 What can we do to defend our public space? A public space is not about density, where we can observe or participate, where behaviors are not codified

A medical problem which needs to be resolved

The High Line is a 1.5 mile park, transformed from a defunct railway stretching from the Meatpacking District to the Hudson Rail Yards in Manhattan. The Shed, a multi-disciplinary kinetic structure, is a mobile carapace that can be rolled out on wheels.

Celia Lyttleton: As humankind enters the Covid era, it is challenging for the architect to approach designing buildings in a pragmatic and holistic way. It is crucial to take a non-anthropogenic approach in all fields, especially architecture. How do you both see a post pandemic paradigm in your practices?

Elizabeth Diller: We need to ensure that the next time this happens we are equipped. The way to take on this challenge of density is to think of the 4th dimension, of the 24-hour global market cycle, so that we can engage in activities, public and social. We have to be prepared for denser cities. To look at it in a pessimistic way the virus is going to be with us for a long time. We are on a track of densification of cities.

We need to think for that future but with plenty of outdoor space as well as the twenty-four-hour cycle.

Referencing the High Line, The Shed and The Mile-Long Opera as a strategy for a post Covid-19 era, The Shed is flexible as the Shed allows us the choice for outdoor and indoor space. When a part of the shed is deployed as a shell onto the open space it can enclose that space as needed, but it can also nest in position to open a space. When we designed The Shed, we did not foresee the need to have programming for medical reasons and now it comes in handy for programming in the next half year. The Mile-Long Opera was a performance that was meant to be a critique and a challenge to the conventions of opera, the Wagnerian type of opera. Why cannot operas go back onto the streets, like an al fresco opera? We had the opportunity to stage the Mile-Long Opera outside on the High Line.

The way it functions is the audience flows past the performers in a one-way system and this turns out to be how the High Line is opening up, now in the Covid era, flowing only from south to north. And yet this was how the High Line was made, without the knowledge of this pandemic, that outdoor performances could be played out in movement, without stasis; so, needed in a time like this.

Stefano Boeri: In lockdown I re-read Roland Barthes’s series of lectures he gave in 1977 in Paris – How to Live Together: Novelistic Simulations of Some Everyday Spaces – dedicated to themes of human relationships in which Barthes addresses the condition of solitude and community. Reading Barthes, it is clear: if solitude is the opposite of density, how do you not lose the condition of being together? While keeping the notion of distance. What can we do to defend our public space? A public space is not about density, where we can observe or participate, where behaviors are not codified.

We have to be aware of what could change public spaces

In other parts of the world such as China and South Korea, the system of digital control devices is reducing the variety of behaviors in a collective space.

LD: Zaryad’ye Park in Moscow posed a set of challenges. How do you build a public space and park in front of the Kremlin? Parks and architecture endure longer than regimes. The brief was not to make a space for gatherings. We made a park that defies the typical way Moscow parks are designed: their parks draw from a list of types of trees, shrubs, and plants, they had to be sanctioned, there were all sorts of rules of how you make parks.

You cannot allow the public onto the lawns or vegetation: in the competition we defied those rules. We made spaces for people to gather and we used plants from Russia. There are no formal gardens, rose bushes or flower beds; we called it ‘Wild Urbanism’. 14,000 square meters of terracing recreate four regional landscapes, tundra, forest, steppe, and wetland. A stone paving system knits hardscape and landscape together – generating a blend rather than a border encouraging visitors to meander freely. There is a freedom of movement in any direction. This project was submitted with an international jury in 2013, there were ninety submissions and ours was selected. We were able to build it to our vision.

The objective here is to be able to do anything, if there is a protest then there is a space for it to happen, we cannot account for the government trying to suppress the protest but we have a space, in which to protest in front of the Kremlin and the Red Square. We have a park that meets some of the aspirations of a 21st-century society – more agency for the citizens to create things and use the space as they see fit. There is an area for outdoor performance and two amphitheaters that have been utilized well.

We experimented with ‘assisted weather’ augmented micro-climates that extend the short park season, so that the park can be utilized in Russian winters. We used passive thermal elements by floating a glass crust over a landscaped hill that acts as a roof on the concert hall. This glass shell facilitates hot air to rise so the area is green and warm even if it is snowing outside. People can sit there in the sun or at night. In summer, motorized glass panels open to expel heat through the roof. It is an experiment, an idea where the warm air rises.

These natural zones provide places of gathering, repose, and observation in concert with performance spaces and enclosed cultural pavilions. Each visitor’s experience is tailor made for them by them. With all of our aspirations about public gatherings and freedoms in mind we gave the public what they did not know they had in the park, freedom to roam. There has been some interesting press coverage; critiques from public officials, outraged about the influence of a western architect.

The Bosco Verticale in Milan

CL: The Fiume Verde in Milano and the High Line are two urban green infrastructures in abandoned railway yards. Mr. Boeri – the green infrastructure, which enters into the dense tissue in the city is the ‘graft’ concept: can you expand on this and how it works?

SB: In Milano, the Fiume Verde, as well as the Bosco Verticale, are examples of demineralizing urban surfaces. In the case of the Bosco Verticale it is about architecture: a single building, using living nature as an essential component. It allows a proximity between species of humans, insects, trees, birds, and plants in an unusual density and allows them to coexist in an intricate ecosystem. The Bosco Verticale is peculiar because of its architecture and how it mirrors the change of time, how it reflects in its colors and shapes with the seasons.

Fiume Verde is a different project: it is an area of seven disused railway yards to be repurposed. We proposed to leave living nature to return and take its course, so that there could be woodlands and meadows. The idea was to leave the 90 percent of the site permeable and green, while the remaining 10 percent high density urban parts on the borders were designed to host social housing residential buildings, study spaces, workshops for the young and student hotels.

Under this point of view, Fiume Verde is close to the High Line. To imagine the future of a city – like Milano or New York – means to accept this challenge: re-occupy wastelands and urban voids, re-embracing living nature.

Elizabeth Diller and Ricardo Scofidio founded the studio in 1981, known today as Diller Scofidio + Renfro. DS+R’s clients include the MoMA in New York, the Boston’s ICA , the London Centre for Music, The V&A Museum, London, The Broad Museum in Los Angeles, the Berkeley Art Museum, the Museo da Imagem e do Som in Rio de Janeiro and the Lincoln Center, NYC. Elizabeth Diller was the recipient of the Jane Drew Prize last year and she is Professor of Architecture at Princeton University.