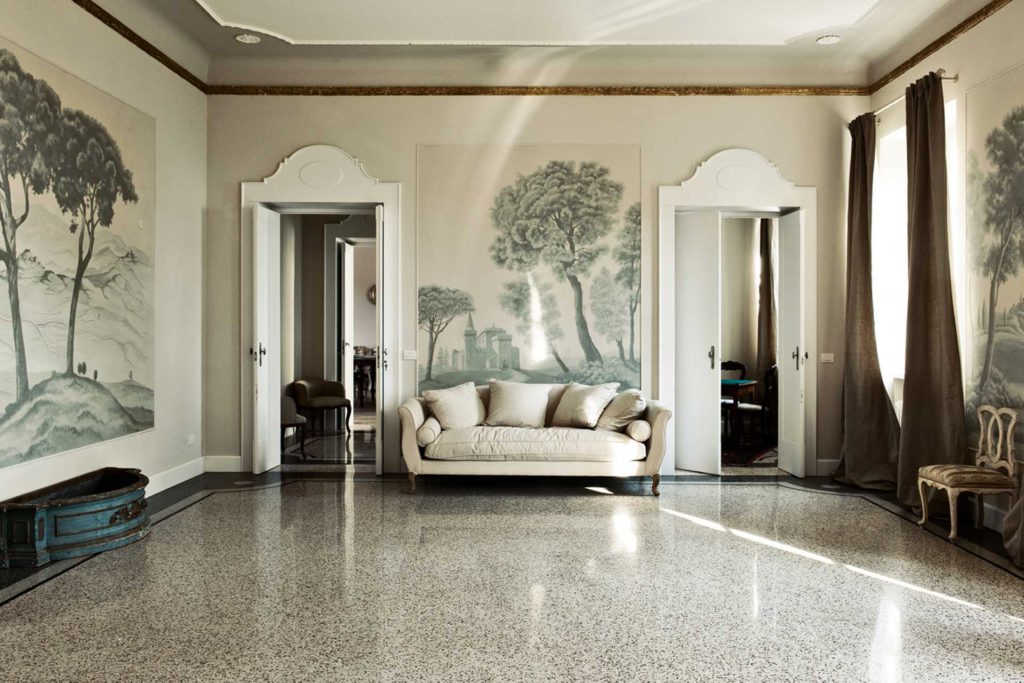 Castello di Buttrio, Udine. A 17th-century castle restored under the surveillance of the Cultural Heritage

The restoration of the castle by the Felluga family has been an attempt of valorization of what was already in situ: «Every stone, and even the trees, are all catalogued. And in the trees catalogue are also included the now 40 hectares of vines»

In the hills around Udine, in the Friuli-Venezia-Giulia region, rises Castello di Buttrio, a place whose restoration had allowed to carry on traditions rooted in the territory, becoming a means of support for a local culture rich in history and focused on the constant relationship with nature. The property stands on the Pampinutta hill, a place that in the past offered defence thanks to its panoramic view on the Colli Orientali, renown for their wines, a view that then has become a reason to enjoy the beauty of the region. Within the property there is a house-hotel, the core of what was before the castle, a farmhouse, and even a 14th century church in the gardens, to be found in the gardens during a walk.

The first castle was built here at the end of the 11th century, then destroyed by invasions and wars. The structure that is seen today dates back to the 17th century when it was rebuilt, and it incorporates parts of walls, corners, and turrets that had survived the destruction. Since then, it has been the residence of noble families of the area, first the Lords of Buttrio and then the Morpurgo family, handed down through marriages or conquests, until the end of the Second World War, in 1944. In that year the Morpurgo family abandoned the castle, leaving it to degradation. The castle was the summer residence of the Morpurgo: for this reason, there was also a farm that served for the family’s consumption, including 11 hectares of vineyards, dating back to 1933. Those hectares were the reason why Marco Felluga decided to buy the property at the end of the Nineties. But, although abandoned for half a century, the castle was not rebuilt. «I wanted to renovate it, and I wanted to make it all under the protection of the Cultural Heritage», says Alessandra Felluga, Marco’s daughter. «Every stone, and even the trees, are all catalogued, including a monumental mulberry tree, an evidence of the silk-related activities that happened here. And in the trees catalogue are also included the now 40 hectares of vines, in particular the 11 ancient ones from 1933».

One of the principles that led the restoration was to safeguard the house in all its aspects, objects, corners, and spaces. «To renovate this kind of house is not always easy, especially when the destination wants to be linked to hospitality. You have to reconcile what the regulations are with the protection of the house. I have fought a lot to protect the castle, and I think that the regulations must absolutely be respected, but they also have to take a step backwards» affirms Felluga, addressing some problems that arose during the works. She wanted, and tried, to protect every detail of the structure. «I have tried to recover everything, every little thing, entrusting it to expert hands who would understand how to deal with these walls, who knew how to approach all windows’ stone frames, and who understood how to use natural materials, also reconciling this with convenience and comfort». To then see the house regaining life was satisfaction for her. She recalls the moment when she felt that it was alive again. « I remember that, before, when we passed by this house it was unlit, dark and abandoned. It was almost a ruin. So I remember precisely the moment when I left the first light on, one evening. When I passed on the road down the hill, and stopped to look up, I thought that it was just beautiful. I have this very vivid memory of that first light that I left on. I really had the feeling that the castle had finally taken back its beauty».

Another goal of the restoration was to give life again to a place that had become a frequented site by the community. The structure is located on a hill in the middle of vineyards, and has a view of the landscape around that attracts people and families with children for walks or bike rides. «The renovation has certainly added value to the territory, and I see that the locals with me breathes this air of betterment» states Felluga. «We wanted to present these hills to an audience, not to keep them only for us. And the result is that the municipality is very busy with initiatives that involve us on many levels». Felluga wants to share that same sense of wonder that the castle inspires to her also with the guests of the structure. «We want our guests to feel at home and to live in relaxation and tranquility in this space. For this reason we organize visits in the winery and the vineyards, besides visits to the house». The kind of visitors that appreciate the visit to the castle are the ones that have an interest in historical architecture and renovation. What attracts them is the attention to detail that has guided the works. For example, all the stonewalls have been safeguarded, and the exterior gutters are made in copper, like the originals. In addition, natural materials have been preferred, to reconcile with the preservation of the structure. The idea is to sustain the castle ecology with what is already in its territory: flowers and gardens are watered with collected rainwater, and the fireplaces in the house are lit in the morning with wood collected within the property. «Too much technology didn’t fit well in the restoration process, and in this way the place can be lived at its fullest».

The philosophy behind The Castello di Buttrio

What guests are offered at Castello di Buttrio are space and time. Is upon this concept that was thought of the spaces inside and outside it. Besides walks and bike rides, there’s the opportunity to enjoy a sunset with an aperitif and a glass of the castle wine, or to go up the tower to watch the sunrise. «We try to propose this, however, we have noticed that some things come naturally since at 7 in the morning it’s no surprise to cross a guest coming back from a run, or a walk. They integrate here from the first moment. We see that they can understand what we wanted to convey» adds Felluga. «Nature is part of this place and this place belongs to nature». And here the culture of nature goes hand in hand with the culture of wine, with one integrating and exalting the other. The idea to restore the castle and the idea to expand its vineyard was not one the consequence of the other but were thought together. «The world of wine is very tied to hospitality, so it was extremely natural and fluid to integrate one with the other» states Felluga. In this case, the idea to carry on a tradition tied to the territory and its history emerges also on the wines’ labels. During the renovation works it was found out that in the stables of the castle were cultivated silkworms, fed with mulberry, a tree still present in the gardens, and which is being protected for this reason. Inside the castle were then found written evidence of a silk activity, and Felluga wanted to maintain this aspect of the place’s history. For this reason, wine labels echo a pattern of textiles found in the castle and are printed with a tactile texture.

«I hope that the feeling I had, and that now I share with my three daughters, who collaborate with me, is that of a fusion of all these things, of what the traditions are». To survive, traditions need to go on. That’s why the renovation works at Castello di Buttrio will never be completed, in the end. «When you start to live in this kind of house again, other things come to mind, ideas for other extensions, in terms of proposals for guests. And we aspire to offer a few more things».

Castello di Buttrio is an ancient castle near Udine, in northeast Italy. In its property can be found, besides the castle, 40 hectares of vineyards and other structures for guests accommodation.