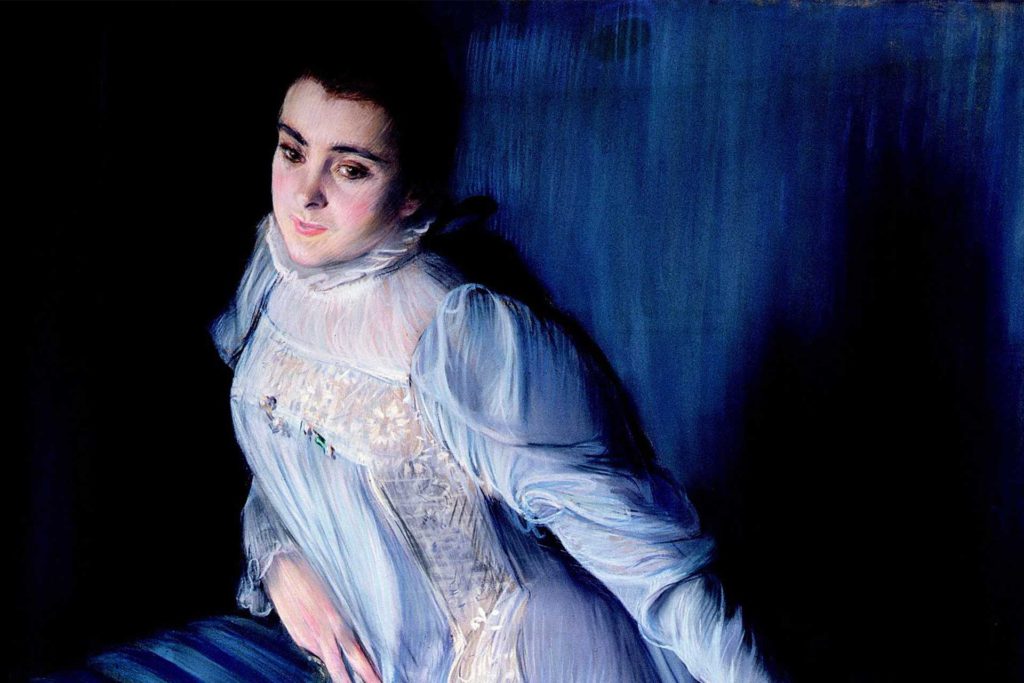 Eugenia Errázuriz – from childhood to marriage

Legend has it that Eugenia Errázuriz, born in Bolivia on 15th September, 1860, to silver magnate Ildefonso Huici y Peón and becoming in her old age a tertiary Franciscan, had Coco Chanel make her an austere black dress. Her fascination with religion, which only grew with age, was transmitted to her by her family’s imprinting, but also from her years spent being educated by the English nuns in Valparaíso. An experience that she in some ways shared with Gabrielle Chanel, who was brought up in the orphanage of the Aubazine convent in the Nouvelle-Aquitaine region of central France. The Huicis moved with their daughters Eugenia and Rosa – going on to have thirteen children– to their estate in La Calera, Chile, after the breakout of the civil war in Bolivia. Wealthy in her own right, at the age of twenty Eugenia became even wealthier by marrying Chilean diplomat and landscape painter José Tomás Errázuriz Urmeneta, Ernesto Kirchbach’s apprentice, whose father and grandfather had both been presidents of the Chilean republic.

The couple spent the first years of marriage in a gilded isolation at Panquehue Errázuriz, the family’s wine estate. Here Eugenia gave birth to a son who died soon after, she then went on to have three surviving children: Maximiliano, Carmen and María, also called Baby. Life in a South American hacienda, as comfortable as may be, started to get restrictive for Eugenia, who’d rather speak in English or French than in Castillian, even using a sort of Iberic grammelot that was often hard to understand. The same goes for the archaic baroque conventions of Spanish colonialism. In 1882, she convinced her husband to move to Paris, the Ville Lumière at the heart of the Belle Époque, where her brother-in-law Ramón Subercase aux Vicuña was the Chilean consul. Alongside him, his wife, Amalia Errázuriz, an exotic beauty who had been painted by John Singer Sargent, an American artist whom Eugenia would meet in the fall of that year in Venice, where he shared a studio with her brother- in-law Ramón in Ca’ Rezzonico, in the Canal Grande.

It was perhaps the summer of 1989: Paris was full of possibilities, lights and encounters. One could meet Sir John Richardson, art historian and British esthete who had relocated to New York City – collaborating with the New York Observer – almost every day at lunch time at Voltaire’s bistrot. That’s how I got to meet him through an English friend. He gave off a sort of pale light, as he slowly ate his soupe du jour and amused himself, when he was in a good mood, by telling with a modulated upper-class accent, various anecdotes about Picasso, of whom he has been the most famous biographer. Maliciously, many would say that his vision on the Catalan Minotaur and his artistic personality were little more than a pile of gossip and rumors. The controversial fame he had, amongst a certain branchée critique – especially the French one, made him more appealing. The lunches would run into the afternoons and from his memory would emerge the artistic and social scenery of the Short Century.

In 1949, Richardson had begun a relationship with the academic and collector Douglas Cooper, with whom he would go on to live for over a decade. In 1952, they moved in together in Provence, at the Château de Castille near Avignon, a seventeenth-century manor with roots that dated back to the thirteenth century, that was then transformed into a sort of temple of cubism thanks to the many paintings and murals created by Pablo Picasso between June 1962 and May 1963. In the ten years spent in Provence, John Richardson became a close friend to Picasso, Fernand Léger and Nicolas de Staël. The biographic project A Life of Picasso, which was originally supposed to be a single volume published in 1991, ended up becoming four volumes, the last of which will be published next fall and stops at 1940. The Provencal period is re-lived in the 1999 book The Sorcerer’s Appren- tice: Picasso, Provence and Douglas Cooper.

About Picasso and Douglas Cooper, who died in 1984, Richardson would talk, mixing prosaic memories, ironic camp aspects and an aura of legend – a cocktail which resulted in a vivid and not at all nostalgic conversation. He would talk about others of his friends, such as Francis Bacon and Lucian Freud and of infinite figures who had walked through his life or caught his attention. Madame Errázuriz was amongst those, as testify the pages that are dedicated to her in Sacred Monsters, Sacred Masters: Beaton, Capote, Dalí, Picasso, Freud, Warhol and More, 2001. Richardson too, just like Picasso and the French-Swiss poet, writer and film-maker Blaise Cendrars – who called her ‘L’indienne’, adamantly believed that Mme Errázuriz had inherited more than just one drop of Inca blood. The pink ‘Inca’ of the Andes would universally become known as Schiaparelli’s ‘Shocking Pink’. Richardson recounts: «Eugenia exercised a modernist influence on the taste of the half of the twentieth century which was more radical than those that are considered as responsible for its realization».

Eugenia became the subject of works by the likes of Giovanni Boldini, Helleu, Jacques-Emile Blanche, Augustus John, Orpen, Ambrose Mc Evoy and even Picasso, for whom she became a confidant and his ‘other mother’ from 1916, taking the role of the iconic and cumbersome Doña María, the artist’s mother in Barcelona. Eugenia’s salon shunned high society tout court to address only a circle of intellectuals which included some of Proust’s favorites – princess Bibesco, the Madrazos, Helleu and the Morandis. Errázuriz regularly met with American heiress Winnaretta Singer, who had become Princesse Edmond de Pilignac, musicians of the likes of Gabriel Fauré, painters Jacques Helleu, Ernest Duez, Boldini and Joseph Roger-Jourdain. Not too interested in fashion, superficial chicness and gossip, her interests and conversations veered into the militancy in supporting novelty in the arts, literature, music and ballet. She funded Stravinsky and Diaghilev experimentations at the Ballets russes.

Later will come the turn for Jean Cocteau, Baron de Meyer and Cecil Beaton, as well as a young Arthur Rubinstein who owes her his international debut. The décor in her houses took a turn towards minimalism from 1910, eliminating all the classical ornamental elements of the time: poufs, opulent damask curtains, golden bronzes, lace trimmings and passementeries. In around 1900, the Errázurizs moved to London, first to Bryanston Square then to Chelsea. Tomás, sick with tuberculosis, would spend more and more time in Switzerland. The couple became estranged until his death in 1927. Without her husband, Eugenia would be accompanied by her nephew Don Antonio de Gandarillas, or Tony, the only child of her sister Rosa, a scandalous and much talked-about ex diplomat with penetrating lemur-like eyes, a declared homosexual, devoted to opium and to the tableaux vivants en travesti, who lived in Cheyne Walk with his partner Christopher Wood. Tony had a house in Paris where the two celebrated the première of Diaghilev’s ballet Pastorale on 26th May 1926, with a dinner where the whole ‘monde’ was invited: from Picasso to the Duchess of Alba.

«I like my house, Villa Mimoseraie, a cabane because it looks so clean and so pure», Errázuriz would state. According to Cecil Bea- ton, everything was spotlessly clean. Carpets had been abolished from the red-tile flooring, as well as matched sets of furniture. Her tea table was a masterpiece of zen-like essentiality, her towels smelled of lavender, while she would wash her hair in rainwater like a symbolic naiad or a Georgia O’Keeffe precognition. It was again Beaton who noted how «her effect on the taste of the last fifty years has been so enormous that the whole aesthetic of modern interior decoration, and many of the concepts of simplicity generally acknowledged today, can be laid at her remarkable doorstep». Eugenia would obsessively repeat her mantra believing in an incessant need for change: «throw out and keep throwing out!». A house that didn’t change, that didn’t veer towards essentiality was a dead house.

A graphic and functional piece which would be projected to every corner of her life and her spaces, from the kitchen to the wardrobe. The ambitious Cocteau introduced Eugenia to Blaise Cendrars, with whom she would bond over their common love of astrology. Upon his visit to her residence in Biarritz in 1918, he was struck by the décor’s sacred purism, which inspired the poems D’Oultremer à Indigo, where imagination and reality mix together. With Pablo Picasso, who Eugenia met in 1916 as a lonely and unhappy man with whom she shared an interest in magic and superstition, Errázuriz talked in Spanish. During his months spent in Biarritz, were he spent part of his honeymoon with dancer Olga Khokhlova, Picasso frescoed the walls and ceilings of the Mimoseraie with naked nymphs and suggestions derived from Apollinaire’s Parnassian poetry.

«But the house is rented», screamed Eugenia when she first saw them. Luckily her son Max would buy the house and donate it to her. Three decades later the frescos would be detached and sold. In Biarritz, Errázuriz introduced Picasso to buyers from her entourage, amongst whom were the marquise of Villa-Urrutia, the marquise of Villavieja and the Argentinian socialite Diadamia Patri. Above all she introduced him to Georges Wildenstein, who had a house in Biarritz, and to his future business partner Daniel Rosenberg, who would become his art dealer and whose wives he would portray. Olga, on the other hand, didn’t care at all for Biarritz. The one element the dancer found exciting was the boutique that Coco Chanel had opened in the adjacent Villa Larralde.

Eugenia Huici Errázuriz died aged ninety-one, after being hit by a car in Santiago de Chile in 1951. She left behind the beach villa in its planning phase, that she had commissioned to Le Corbusier to be built on the Chilean coast. The last of the modernist longings of a restless parabola which spanned the years with coherence. Villa Eugenia would go on to be built in Japan, closing a minimalist circle in which the Indienne Eugenia would be fully identified. Of her, Igor Stravinsky wrote, «she had a subtle understanding of modern art, which was unparalleled in anyone of her generation».

Eugenia Huici Arguedas de Errázuriz was a Chilean patron of modernism and a style leader of Paris from 1880 into the 20th century, who paved the way for the modernist minimalist aesthetic that would be taken up in fashion by Coco Chanel.