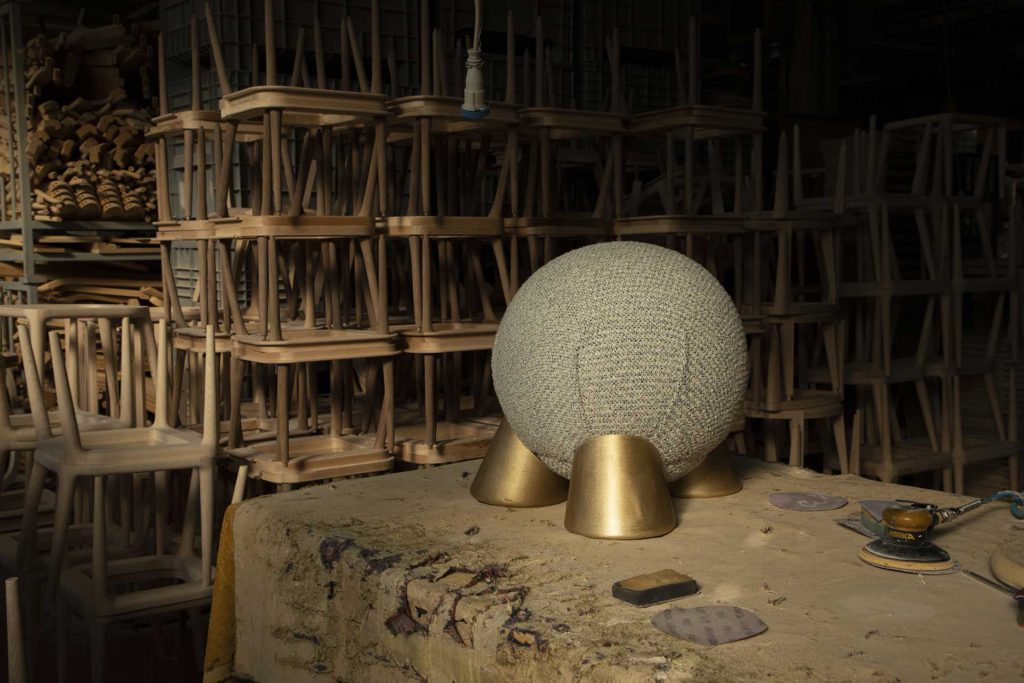 From the Renaissance masters to Rick Owens: all the influences of Pietro Franceschini

«Sometimes it is interesting to think of the same object in different versions; by changing the material, everything else changes»

Florence, New York, Lisbon, Paris, and Siwa. Not only art cities but milestones in the artistic training of Italian architect and designer Pietro Franceschini. A common thread unites his peregrinations: the designer’s curiosity to discover and experience new and different creative environments. «An obsession after the other which eventually found an unexpected synthesis which is still moving,» Franceschini says about his search for new stimuli and challenges. The first years of studying at the faculty of architecture in Florence gave him an intellectual basis, allowing him to open his mind and maintain critical independence. In Lisbon and Paris, he got in touch with new approaches and artistic sensibilities. In Siwa, Egypt, he thoroughly studied oases and their magical architecture made of salt. That was the occasion for more personal research, which continued in Morocco and Saudi Arabia. The degree from the Pratt Institute in Brooklyn and the years spent in various New York architecture studios – including Leeser Architecture and Carlo Ratti Associati – provided him with the opportunity to reconsider his research completely, creating in him a desire to participate in first person to the current creative discourse.

Pietro Franceschini: an original voice in the contemporary creative discourse

Throughout the years, his style was influenced by architects and designers, both classic and modern, such as the Renaissance masters – including Leon Battista Alberti – Adolf Loos and the Viennese Secession, Mendelson and Bruno Taut among the modernists, and Rick Owens, Destroyers Builders, and Pedro Reyes among contemporaries. Each of them, with their peculiarities and stylistic differences, has contributed to shape and define Franceschini’s style, which finds fulfillment in the aesthetic composition of his interior design projects, such as Casa M in Florence’s countryside (2020) – where the juxtaposition between concrete floors and refined design pieces and wooden beams and cracked doors create a harmonious environment – or Villa Altissimo in Turin (2020) – a hotel and art residency challenging the relationship between the artists in residency and the hotel guests through an interlocking of spaces and functions.

Though Franceschini never proposes the same solution twice, as each project is shaped on the client’s preferences and tastes, a leitmotif can be observed in his production: «Each work is in some way the evolution or distortion of the previous one.» The solutions adopted by Franceschini are often minimalist, defined by clean lines, geometric shapes, and natural tones; on the other hand, the material finishes and the combination of refined materials always give his projects a recognizable look. The first stages of a new interior design project are devoted to studying the house plant, which offers interesting inputs and ideas. The arrangement of furniture is built like a movie set where perspectives and proportions play a crucial role. Franceschini’s philosophy is simple but effective: «Few objects, but special.»

Franceschini approached the world of collectibles only recently, in 2020, as a synthesis of everything which preceded it and, most importantly, as the primary channel to express his creativity free of external constraints: «With interior design, the challenge is to create an atmosphere in which the architect’s vision and that of the client coexist in unison. It is a two-part symphony. Listening to the client is crucial because the world you are about to create will impact their daily lives. On the other hand, the world of collectibles is a solo in which the artist has carte blanche to express his vision and undertake his research at 100%».

In Franceschini’s work materials dialogue and coexist, from wood to furs, from steel to marble, he exploits their different properties. He exploits their different properties and features by putting them at the service of his creative urgency: «Each material allows me to explore a different language. Metals and patinas create a light and sophisticated world; marble allows me to explore the most sculptural components of design. The deployment of fabrics and furs stems from my most recent interest. Sometimes it is interesting to think of the same object in different versions; by changing the material, everything else changes» Franceschini claims. For the development of his products, he often relies on the expertise and knowledge of craftsmen located in different regions of Italy, such as the city of Milan where they collaborate with artisans specialized in the manufacture of cushioned products, the Brianza design district where a prototyper takes care of the products which require more experimentation in the manufacturing and finishing phases, and the city of Florence, the hometown of Franceschini, for metalworking. For the processing of marble Franceschini and his team rely on an atelier of masters based in Carrara, the major center in the world for the extraction and processing of its white marble, extracted from the nearby Apuan Alps. «Collaborating with various manufacturers offers me the opportunity to range my research without being ‘trapped’ in the same aesthetic over and over again. We will soon start some collaborations with established design brands that will assist us all along the production process», Franceschini claims.

Among all the materials employed by Franceschini, marble is the one providing him with expressive freedom. His design always starts with in-depth research followed by an intense 3D modeling phase. His projects take shape through a long series of iterations resulting in at least fifty different versions of the same product, allowing an accurate study of details, bevels, and proportions. Marble, through robotic cutting, allows Franceschini to meticulously reproduce the most complex digital designs, while its color tones and veins make each piece irreproducible. Despite the contribution of technology in marble cutting, the final touch and finishes are always done by hand. The look of his furniture pieces also stems from the variety of marble employed: «The very first piece I made, “Gamma Stool” (2020), was in Nero Marquina marble, but we also use a lot of white onyx, statuary marble, Calacatta, and Breccia di Capraia».

During Milan Design Week 2021, Franceschini took part in Rick Owens – Dialog with emerging Italian designers at Galleria Philia, in Milan, where contemporary Italian sculptural design artists aesthetically questioned Rick Owens’ design works. On the occasion of the exhibition, Franceschini presented two unpublished pieces. Urania (2020) is a robot-sculpted chair from a single block of Breccia di Capraia marble and finished by hand. It is the result of ongoing experimentation on the so-called “Neotenic Design” – a term which refers to a design trend featuring elements such as adaptability, playfulness, and creativity, seemingly reflective to the virtues of childhood and youth – aimed at investigating the relationship between sculpture and design.

The second piece was a series of five stools in white onyx called Ode to Rick, conceived and created specifically to display Rick Owens’ bronze vases. «I consider Rick Owens one of the most influential designers for my generation, and the opportunity to display my pieces alongside his has been one of the most inspiring experiences of my career. The unique masculine and primitive character of his pieces resonated perfectly along with the selection of Galleria Philia, which first discovered and promoted my work,» Franceschini says about his latest group exhibition. Rick Owens – Dialog with emerging Italian designers has been for Franceschini an opportunity to investigate further one of the core elements of his production: geometry. Urania was indeed the beginning of ongoing experimentation which resulted in a sort of deformation of the geometric character of his works: «The outcome was something equally clear, but much more organic.» Through material research, Franceschini’s production is taking new directions. For instance, fabrics, one of his obsessions, allow him to discover new possibilities experimenting with combinations and techniques.

Italian architect and designer based in New York and Florence. He was educated in Italy, Portugal, and the United States. He collaborated among others with Leeser Architecture in Brooklyn, Claudio Nardi in Florence, Laisné Roussel in Paris, and Carlo Ratti Associati in New York. His latest project – PF|Studio – was born in 2020 as an interior and furniture design practice.