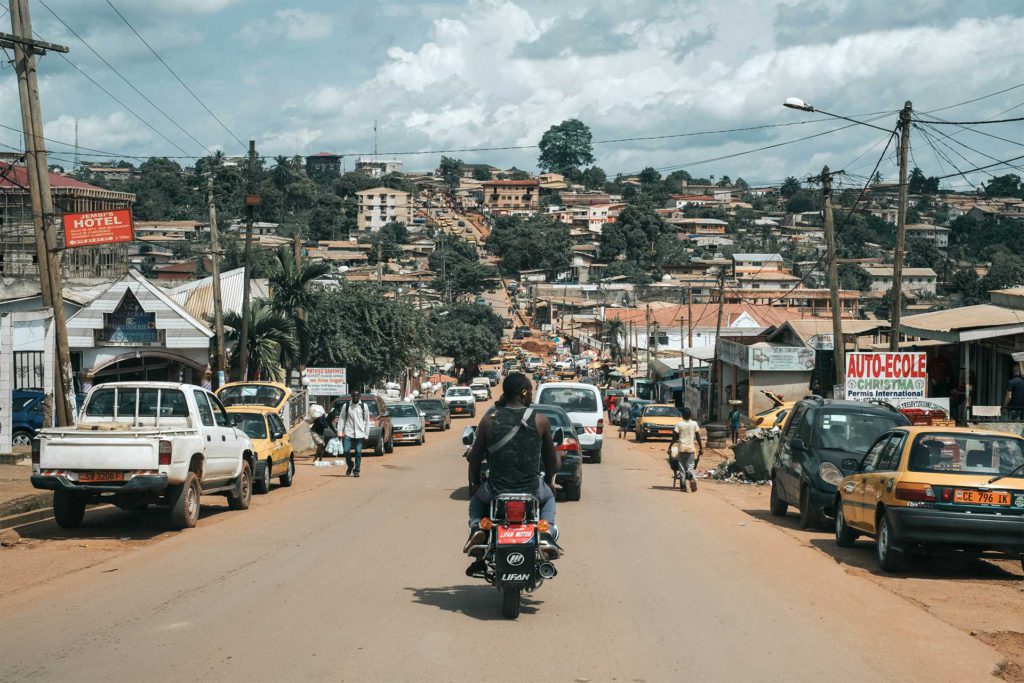 Solving the housing crisis in Cameroon with a different approach: Les Pétales

TAMassociati is a Venice-based social design studio. Together with the design and engineering firm Arup, they propose Les Pétales, to transform the conceptualization of social housing. The project, presented at the 2021 Venice Architecture Biennale, addresses one of the most urgent issues in Yaoundé, the capital of Cameroon: naming the need for a growing number of housing units, due to the increasing densification of the metropolitan areas. «The project was born from an inter-governmental agreement thanks to which different countries – Italy included – hand out funding to developing countries, including Cameroon», explains Stefano Recalcati, Associate Director at Arup.

It is necessary «to give an immediate answer to an urgent issue, meaning solving the housing crisis». At the same time the aim was to «leave the know-how and teach how to develop similar projects to local architects and contractors». Raul Pantaleo, the co-founder of TAMassociati, explains that the starting point is «the wider plan for urban development of states like Cameroon and many other African cities that are facing massive migration flows, both internal and external» in consequence of the economic and environmental crisis.

Cities seem to represent the only solution for a dignified lifestyle in the area, and more and more people are turning to them to improve their quality of life. As a consequence, housing requirements are growing – but budget and resources are not. «The only solution is heavy prefabrication with no attention to social dynamics or environmental sustainability», just focusing on practical solutions for immediate problems. «This also means a limited budget that leaves little space for more human planning».

Higher costs for higher standards are hardly justifiable. Yet, Arup and TAMassocati wanted to do things in a different way, putting the needs of the community and the climate first: «Trying to introduce a way to think of habitability with the citizens at the heart in this context, currently dominated by Chinese companies who only pay attention to value per square meter». At the same time, «we managed to plan the construction of a portion of the city by paying attention to the social and environmental factors with a prefabrication budget – while trying to consider the local customs of everyday life, public spaces and the community». The plan is to build 10,000 new units of Social Housing with roughly a tenth of the budget given to similar projects in western countries.

The design: starting from empty spaces

In order to design a socially and environmentally responsible area on a budget, TAMassociati and Arup simply overturned the perspective: the norm is starting from the design of the housing units and habitable spaces. What they did instead, is they began by thinking about empty spaces. According to Pantaleo, «we worked on the voids first», contrary to the similar settlements in the area that they visited during the research phase which often look like they are «born from nowhere».

Considering empty areas first, it also came natural to «focus on walking mobility», as Recalcati points out – building up yet another uncommon feature: the settlements’ viability are normally car-oriented and designed to be driven on. With Les Pétales, the center is fully walkable «encouraging sociability and sharing». Careful planning was key: «We decided to place driveways only where they were needed, in the outskirts, and leave the center fully walked». From this vision, Les Pétales – from the French word for petals – were born: overlaying this vision to the natural morphology, a flower-shaped form came out, leaving the central spines for people to walk on.

The methodology started from an analysis of SDGs: «We examined the UN Sustainable Goals to understand which were more fitting to our approach, in order to then define a proper vision and then, project aims. From there, the single actions of the masterplan». At the heart were the needs of future users and inhabitants of the space to be created. The process of approval from the Cameroonian ministry started in 2018, and is articulated in three phases: the first is called étude de conception, where the concept is presented and a feasibility study is carried out; the second is the avant-projet sommaire, which includes the presentation of a preliminary project.

After going through the first two, they are now waiting for the final stage: avant-project detaillé approval. This is being slowed down by the current change of government. It is thus virtually impossible to make predictions about construction times, which, since Les Pétales is a major urbanization project, will be years-long in the best case scenario: «A part from original intentions of massive development», says Pantaleo, «what we have already given the ministry is a planning framework that can allow them, even outside the scope of the massive development idea, to build a city that is human-scale». It is about introducing more variability and going around the current norm: «We have shown that doing things differently is possible», something which is worth even more than actually building the neighborhood. The project is also intertwined with a complex social stratum, where a new middle class is emerging but poverty is still widespread.

Urban and peri-urban: reconsidering the relationship

The relation between the urban and peri-urban areas was also thought of: «It is an area towards the west of the city, populated by secondary forests», meaning that at first there were wild forests, which were then repurposed for agriculture, anthropized, and finally regrown: «The context is peculiar both environmentally and because of its landscape». Portions of surviving forests meet farmland and water courses: «We decided to act with a light approach, with respect for the landscape and the natural environment».

The shape of the development is based on the same principle: «It follows the level curves and keeps the relationship with the cultivated surrounding intact». Two parks were designed: one on the hill and one in the valley, obtained in the two most high-value spots of the site. The urban project then develops around these, not the other way around: «It is a new way to understand how you can develop a project that is in dialogue with the rural landscape, but also becomes an integrating part of it». As for the growing techniques, «the point is preserving spaces that are already dedicated to agriculture and leaving them as they are, while also integrating them in the urban landscape».

The result is a new hybrid form of landscape where the concepts of urban and peri-urban are rethought and mixed together. Given the low budget – which was close to zero for the green areas – simple and effective solutions had to be found, such as carefully studying areas that were already green, and leaving them there: «If you already have a tree, it costs nothing to leave it be». The true protagonists of the project are «the public parks. Not really the buildings». The aim is starting from this perspective in order to bring change on the budget distribution as well: if common green areas start to be valued, it is logical they will start being assigned some money too. They carried out an analysis of existing settlements based on five parameters, urban structure, public spaces, mobility, social infrastructure and nature, «for each of those we tried to understand what we could introduce in order to change the existing paradigm and create a new conception of what development means».

Climate change at the center of the vision

Although there was not that much projectile room nor budget to change materials and given construction elements, «what we tried to do was consider the territorial scale and organize the settlement according to certain conditions like the respect of the local morphology, the conservation of permeable surfaces, the handling of waters and the orientation of the buildings to benefit from the climate conditions». The idea was to «incorporate bioclimatic measures that could improve the building performance starting from a study of solar radiation, natural ventilation, and other tricks that could make this low-budget construction sustainable for the environment».

This was especially true for public buildings where more freedom was given. It’s about finding low-cost, smart solutions to be respectful of local nature, even though the building processes themselves were outside the scope of this project: «Moving inside given limits, we tried to move with flexibility». Flexibility is also key because of the nature of urbanization projects: something that is designed today might be built in five or ten years’ time, meaning the industry would probably have changed. It is thus important that the project can still be carried out, even with a different technology, or different forms «without denaturalizing the DNA of the project which in our case was common areas and social spaces».

Active in Social Design internationally since the last millennium, which combines a civil and professional commitment. Arup is an independent firm of designers, planners, engineers, architects, consultants and technical specialists, working across every aspect of today’s built environment.