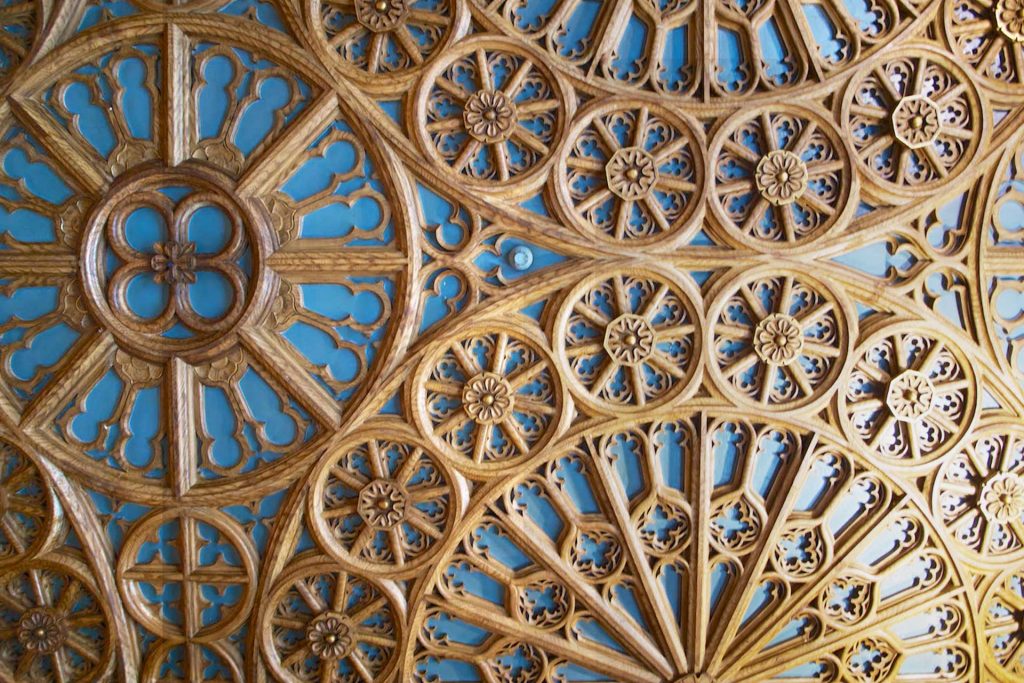 Livraria Lello, Porto. 1000 visitors a day in the second oldest bookstore in the world

J.K. Rowling – who in the Nineties lived in Porto, becoming a visitor of the bookshop – drew inspiration from the atmosphere and the labyrinthine scale of the bookstore to conceive the Hogwarts school of magic

In 2015, Livreria Lello, Porto and Irmão introduced an entry ticket worth three euros, which would become five within four years. If the visitor of the bookstore is also a reader and makes a purchase, that money was subtracted from the price of the book and entry became free. A choice to survive the crisis and transform the five thousand daily tourists into potential buyers. The strategy was criticized, but it worked. In 2016, fifty percent of visitors came out with a book. Over three hundred thousand volumes have been sold in various languages. The nine employees in 2015 became fifty, and sales in 2018 exceed one thousand copies per day on average. We are in Porto, in the center, above the Ribeira district which is reflected in the Douro, the river that bisects the city. Livraria Lello is located at number 144 of Rua das Carmelitas, between the Torre dos Clérigos, city symbol, the University of Porto and the Igreja do Carmo. One of the first libraries in Portugal, it is known as the cathedral of books. The Spanish writer Enrique Vila-Matas, The New York Times, El País, The Guardian and Lonely Planet have mentioned the bookstore in their top ten greatest bookshops in the world.

Livraria Lello was founded in 1869 by the French publisher and bookseller Ernesto Chardron. At the time, it was called Livraria Internacional de Ernesto Chardron and was steps away from its current location, in Rua dos Clérigos. After the owner’s death, the business passed into the hands of Lugan & Genelioux, which expanded it. In 1894, the bookstore was sold to Josè Lello, who owned commercial space in Rua do Almada. A few years later, Josè entered into partnership with his brother (irmão, in Portuguese) Antonio – and hence the name Lello e Irmão. The brothers decided to change their identity to create a literary salon for men of culture of the time. The library, as we know it today, was inaugurated on 13 January 1906 and collected the approval of the main Portuguese intellectuals and politicians. «Erecting a temple to the cult of ideas is an act of merit that, due to its results, will link the names Lello and Irmão to national recognition», declares the writer and diplomat Abel Botelho, at the inauguration ceremony. The project is not entrusted to an architect but to the engineer Francisco Xavier Esteves, known for being a fan of literature – he realizes an eclectic building that merges neo gothic influences with liberty. It was named property of public interest in 1994.

Structured on two floors, the entrance door and the two windows on the sides are surmounted by an arch, above which is written the name of the library in Gothic characters. The 2016 restoration work brought to light the colors of the façade, which were covered with layers of cream-white. On the first floor, three tall and narrow windows overlook the street, with two female figures painted by José Bielman at the sides, symbolizing Art and Science. The rest of the facade alternates floral decorations with geometric shapes, up to the pinnacles and the crenellations. Inside, on the sides of the room are the dark wooden pillars with the bas-reliefs of the founders of the library and the busts of Portuguese writers, made by Romão Junior. A spiral staircase with carmine red steps leads to the upper floor, open to the public since 1995. «Those who cross the room discover the staircase, for the impression of lightness and for the audacity of the conception. We feel the need to rise and the fear of destroying it with our weight», reads the 1930 Catalog of the library. The ceiling is chiseled. It reads in the eight-meter-long glass window: Decus in labore (Dignity in Work).

From the novels of Fernando Pessoa to those of the Nobel Prize winner José Saramago, books are placed up to the roof on dark and solid wood shelves. The impression it gives is that balance is precarious and can collapse. The catalog combines Portuguese books with international authors translated into languages, including English, Spanish, Italian and Russian, for a clientele of seventy percent tourists. The collection of ancient texts and rare works, which date back to the old Chardron library, alternate with periodical publications, specialized magazines and CDs, especially fado. On the walls there are paintings, illustrations and prints on display. Childhood literature takes up ten shelves. In 2016, on the occasion of International Children’s Day, Lello printed his first children’s book Na livraria mais bonita do mundo, accompanied by an animated short film to promote reading for the age group. The book and short film have been translated into English, French and Spanish.

Since 1995 Livraria Lello has been run by the Prólogo Livreiros company, which includes fifth generation heir, Josè Manuel Lello. In the basement are organized workshops, cultural events and free presentations open to the public. To increase the fame of the bookstore and the number of its visitors in recent years, J.K. Rowling plays a role. In the Nineties, the British writer lived for a period of time in Porto, where she worked as a teacher, becoming a visitor of the library. It is said that she drew inspiration from the atmosphere and the labyrinthine scale of the place to conceive the Hogwarts school of magic.