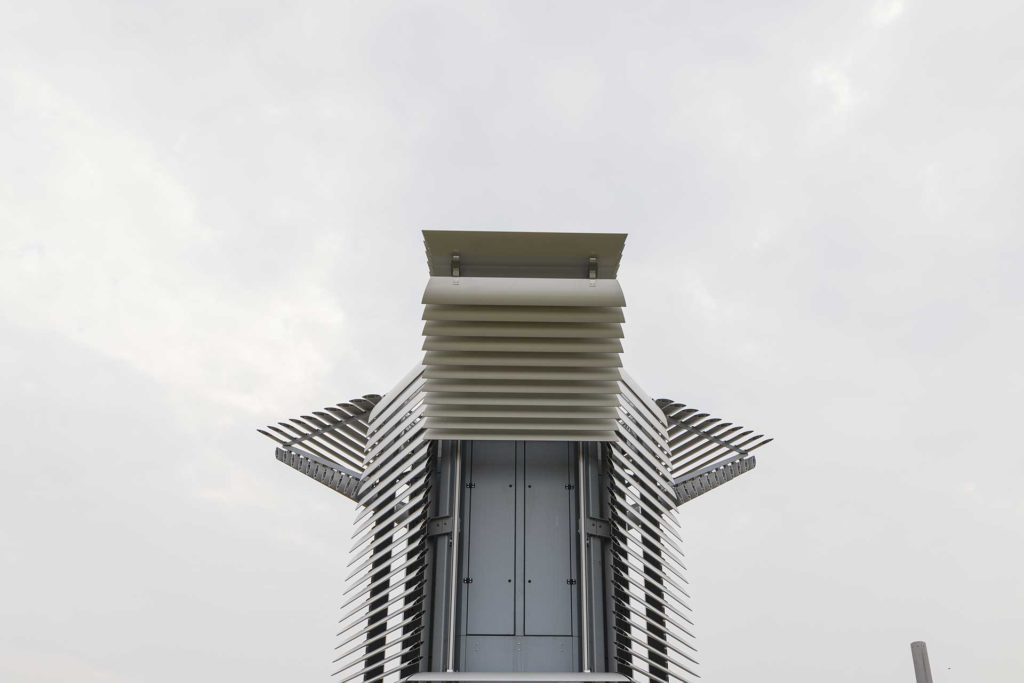 Air pollution, a global disaster: to be solved with solar-powered air cleaners

«We should start to see the world; not as a utopia, but as a protopia». In conversation with Daan Roosegaarde, on his 7-meter smog eating tower

Air pollution and solutions to make the world more breathable

Air pollution, a hazardous source of polluted air that has been caused by man-made inventions such as emissions from factories, cars and planes, has posed a plague for far too long in our generation. This is on account not only of the repercussions on climate change, but also its repercussions on individual and public health and welfare as a result of the increase in mortality and morbidity. Smog is a product created by the burning of fossil fuels and their derivatives, containing large assortments of particulates and greenhouse gasses.

As reported by the World Health Organization, more than four million people die early due to outdoor air pollution. Some of the world’s most polluted cities are Karachi, Pakistan; New Delhi, India; Beijing, China; Lima, Peru; and Cairo, Egypt. However, many developed nations also have air pollution problems. Los Angeles, California, is nicknamed Smog City. In efforts to make the world breathable once more, Dutch architect, designer and inventor Daan Roosegaarde created a twenty-three foot tall (seven meters) air purifier called the Smog Free Tower, which has turned into the largest air purifier in the world.

The solar-powered Smog Free Tower is similar to a vacuum machine; sucking in dust and dirt from the contaminated atmosphere and releases clean and purified air for people to be able to breathe toxic free through the process of air ionization. Air ionization is a well-documented practice that has been adopted in several applications that include, but are not limited to, the reduction of static electricity and separation of particulates from the air.  «The device draws in dirty air from the sky and captures ultra-fine smog particles by using patented ion-technology as well as consuming as little electricity as possible. The clean air that is blown out again will create a ‘Smog Free Park’; a bubble of clean air in which we can inhale and experience an air that is seventy-five percent more clean than the rest of the city. By charging the Smog Free Tower with a small positive current, an electrode will send positive ions into the air. These ions will attach themselves to fine dust particles. A negatively charged surface — the counter electrode — will then draw the positive ions in, together with the fine dust particles. The fine dust that would normally harm us, is collected together with the ions and stored inside of the tower. This technology manages to capture ultra-fine smog particles which regular filter systems fail to do».

The project has been exhibited in some parks in Beijing, Tianjin and Dalian in China, in Rotterdam and in Krakow. According to Roosegaarde, it functions according to the law of electrostatic energy that everyone at a point in their educational career and children have observed on balloons; the friction exerted by rubbing a material on an insulator displaces the electrons one side, that being the positively charged, onto the other negatively charged side. The same goes for the Smog Free Tower: emitting positive ions in the air where smog micro-particles that would in a normal environment harm us are attacked and then sucked into the negative ions that are being produced by the tower itself and get stored there – the tower has the capability to purify more than thirty thousand cubic meters or air per hour; similar to the size of soccer stadium in a day and a half running on 1,400 watts of green energy. Roosegaarde explains, «what makes our technology singular is its effectiveness against all fine dust, its low energy consumption, the low maintenance required by our system, its ability to clean large quantities of air at once and its ability to do so at high speed».

No waste produced with the smog particle extracted from the air

The tower’s cleaning radius is dependent on the wind, type of humidity and weather of the surrounding environment. It ensures that during the air purifying process no waste is being produced with the smog particle extracted from the air — at the end of the process, this can be turned into exclusive pieces of jewelry. It is done by compressing carbon-filled smog dust into jewelry products, like rings and cufflinks, that contain smog dust filtered from one thousand cubic meters of air. Following the results of the tower and its success in several countries like China, Poland and the Netherlands, Roosegaarde and his team at Studio Roosegaarde have tried to instill and promote a campaign as well as dedicating time and effort into organizing workshops with students and educating them on the importance of such endeavors. «New designs need to harness creative thinking to provide practical solutions to clean living. Sometimes these projects use technologies we develop from scratch, sometimes we use principles inspired by nature».

The Dutch designer is adamant that people are hard to convince on just facts and numbers. His design to combat air pollution aims to trigger the imagination for a new world that will be able to activate people and to become part of the solution. «We live in a world where there is not a lack of technology but rather a lack of imagination. Imagination of how we want the future to look like and if we cannot imagine the future, we are also not able to create it. That is why we are stuck, because as humans we are afraid of the unknown. Projects like this one are prototypes for the city of tomorrow, they are proposals for how we should start to see the world; not as a utopia, but as a protopia, to show, to learn, to fail and to upgrade the world around us».

Projects and prototypes for the city of tomorrow

With more than fifty percent of the human race living in urbanized areas, humanity has taken resources from around the planet and intensified them in cities. Some might argue that these approaches may sustain a modern city whilst others dispel such novelties believing that they have been a main cause to the environmental degradation that we are currently facing as a human race. «There is this Dutch word ‘Schoonheid’ which has two meanings; beauty and creativity, but also clarity or cleanness as in clean air, clean water and clean energy. These are the future values of our society and only if we make this part of our new standard can we start to evolve. These projects are prototypes for the city of tomorrow, they are proposals for how we should see the world, inspiring everyone to become and lead a more sustainable life and to create a more sustainable future».

Worldwide, many countries have taken steps to reduce or limit greenhouse gas emissions to combat global warming. Roosegaarde and his team are aiming to introduce the smog free towers to several more countries where smog poses a threat for the health and welfare of citizens. The Dutch designer concludes, «the Smog Free Project is a long-term campaign for clean air. The seven-meter tall Smog Free Tower is the largest air purifier in the world which creates a bubble of clean air enabling citizens to experience clean air for free. We are pioneers for the livability of our future landscape in the global world. Clean air, but also clean water, clean energy, and clean space are our new future values and should be accessible to everybody».

Artist, designer, architect and inventor that studied Fine Arts and then Architecture at the Berlage Institute in Rotterdam. In 2007, he founded his firm and which resulted in his success regarding his designs such as the Smog Free Tower. According to Forbesand Wired, Roosegaarde is among the innovators of our time and a member of the NASA Innovation Team.