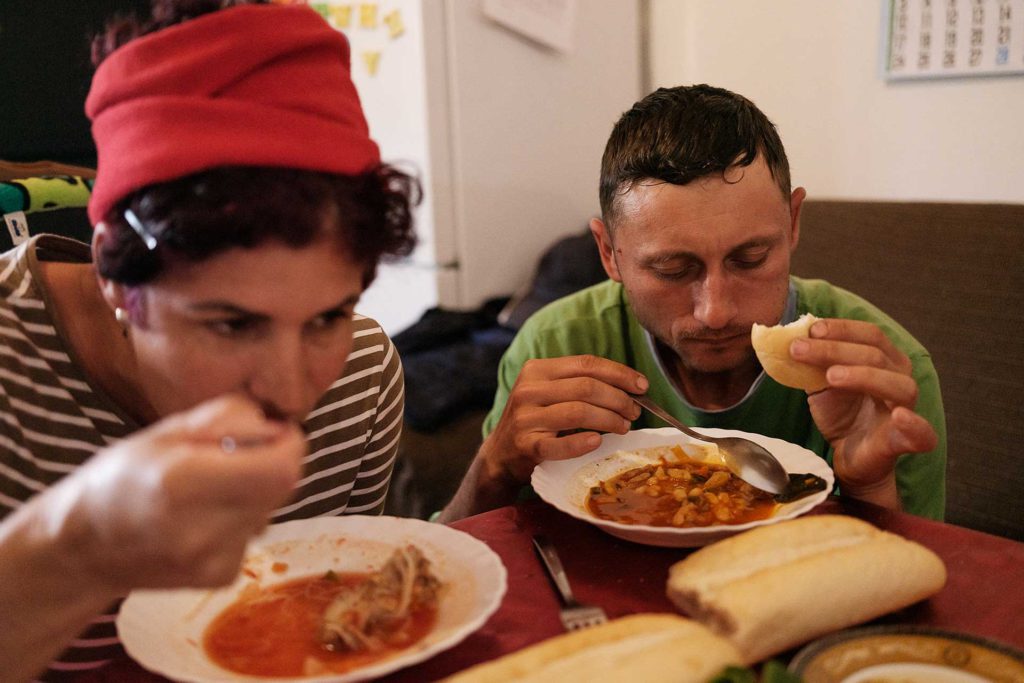 The Romanian diaspora at Venice Biennale: how the mobility of large masses will impact architects

Mapping and investigating migrations to understand the way society will look like in the near future. A first step is Fading Borders, telling the story of the Romanian diaspora at Venice Biennale

On show at the Romanian pavilion of Architecture Biennale 2021, Fading Borders investigates the topic of the diaspora from Romania. Through an interdisciplinary approach, the pavilion, curated by Irina Meliță and Ștefan Simion, sees the participation of Ideilagram, a Romanian architecture and urbanism studio. In the past, the studio contributed with Shrinking Cities and photojournalism duo, Teleleu, creators of the project entitled, Away. The combination of the two languages – architectural study on the one hand, words and images on the other – gives a complex picture of the current state of the country and of the diaspora communities across Europe.

Elena Stancu, co-founder of Teleleu, takes care of the interviews and written pieces. She explains: «Romania is currently the country with more citizens living across the European Union». Three point four million people have left the country since it joined the European Union in 2007, but the phenomenon occurred even before then, specifically regarding migrants without papers. However, the percentage of immigrants coming to Romania has increased by four times between 2005 and 2017. That corresponds to two percent of the population: «The urban implications triggered by this process legitimize Romania to initiate a debate related to the role of architecture and urbanism in this new context». Fading Borders opens the conversation about how the mobility of large masses of people will impact the way architects will imagine future uses of the existing heritage and how new forms of urbanities could arise. Teleleu was diffused around Europe with the use of a camper van, visiting Italy, Germany, Spain, Portugal and the United Kingdom. The largest community is in Italy with one point two million people. «We started traveling around Europe in January 2019» says Stancu, «because we wanted to capture their everyday lives in communities where they established». They investigated various aspects: the types of work the migrants were doing, what brought them to leave their countries, which issues they were facing in their new communities and how they settled in. Above focusing on direct migrants, Teleleu also looks at the second generation «who often can’t even talk Romanian», shaping a completely different social status. A selection of stories mapping the diaspora was collected and showcased at the Venice Biennale. Among the subjects interviewed, there were seasonal and healthcare workers, an opera singer, a rapper, a woman working in a multinational in France and many others – the idea was to diversify as much as possible.  The aim, according to Teleleu, was to «showcase individual stories», to contrast the mainstream narration of national media, who generally talk about migration «just in terms of numbers, either of people who left or relating to the amount of money sent to families back home». Instead, «nobody talks about the problems that people can encounter», both those who leave and those who remain.

An increasing number of Romanian cities are getting emptied because of the delicate socio-economic situation the country is in. The cities and towns portrayed in the Shrinking Cities project are the same cities the people interviewed and photographed by Teleleu came from. The twofold perspective contributed to picturing the complexity of the situation. The main challenge Romania is currently facing in urbanism is related to the future of these emptied communities: «Rather than focusing on a pessimistic outlook, the study welcomes a constructive understanding of the phenomenon. Contrary to common wisdom, shrinkage is embraced as a vector for modernization and innovation, re-use, alternative resources, artistic creation, and revaluation of interpersonal relationships». The situation is generally presented negatively, but the pandemic has also shed a light on a new trend that may represent an opportunity to re-evaluate shrinking cities. In Idealagram’s words, «one of the traps of working with shrinkage is having a mechanical approach, taking into account only the terms of decay, blight, decline, abandonment, de-urbanization, urban crisis, and demographic change, ignoring the dynamic and specificities that could lead to positive outcomes. However, the pandemic has pointed out a trend that has been happening already for a few years, that shrinking cities can become the choice for many, as they embody a sought hybrid between urban and rural». As our ideas and our social conformation changes, architects and urban planners have to take migrations into consideration in shaping a future that is both livable for citizens and sustainable for the environment.

How will migrations reshape architecture?

New migration roots are emerging ever more frequently as we witness climatic and socio-economic crises and rising armed conflicts. One of the main questions Fading Borders tries to answer is about how these migration flows will affect the future of architecture – and the architecture of the future – starting from the assumption that «migration might be a surprising angle to approach contemporary architectural and urban thinking or production». Points of departure and arrival were analyzed through places and experiences, broadening the concept. Migration is caused by and affects the climate crisis contemporarily – when flows of people are moving from one country to another or one continent to another, their needs must be accounted for when planning and designing our urban and peri-urban future. Studying the places that get left behind can help the industry to apply principles of conservation rather than demolition when it comes to renovating or having to deal with them. At the same time, urban planning often looks and feels cold to the eyes of the general public: giving names, faces and stories to the numbers of migrants can help to change that perspective. What Teleleu found regarding the people and communities they talked to, was «a need to tell their stories». It is key to listen, not for listening’s sake, but because of the power that these communities hold as well: the last political election in Romania was heavily influenced by citizens living abroad, so much so that it «changed the outcome». A tendency that is not new: «In the past twenty years, we got used to waiting until they counted the diaspora votes». Meaningful chances in the way we build cannot happen unless we pay attention to the way we imagine our future. Fading Borders tells the story of a new social evolution and its impact on local and foreign communities, managing to give architecture a more human side. The two perspectives showcased in the Pavilion complement and mirror each other: «Migration and its various short-term contemporary forms (business opportunities, education, marriage, self-improvement, etc.) will expand and will be more and more linked to the pursuit of improving the quality of life. Fading Borders «initiates a constructive debate, a look to the future, a hypothetical discussion about how we will live together when the world together becomes diverse, and the duration in which the housing acquires a different dynamic».

A photojournalism duo composed of writer and journalist, Elena Stancu ,and photographer, Cosmin Bumbuț. Traveling around Europe in a Camper van, they are currently documenting the Romanian diaspora on an ongoing project entitled, Away.