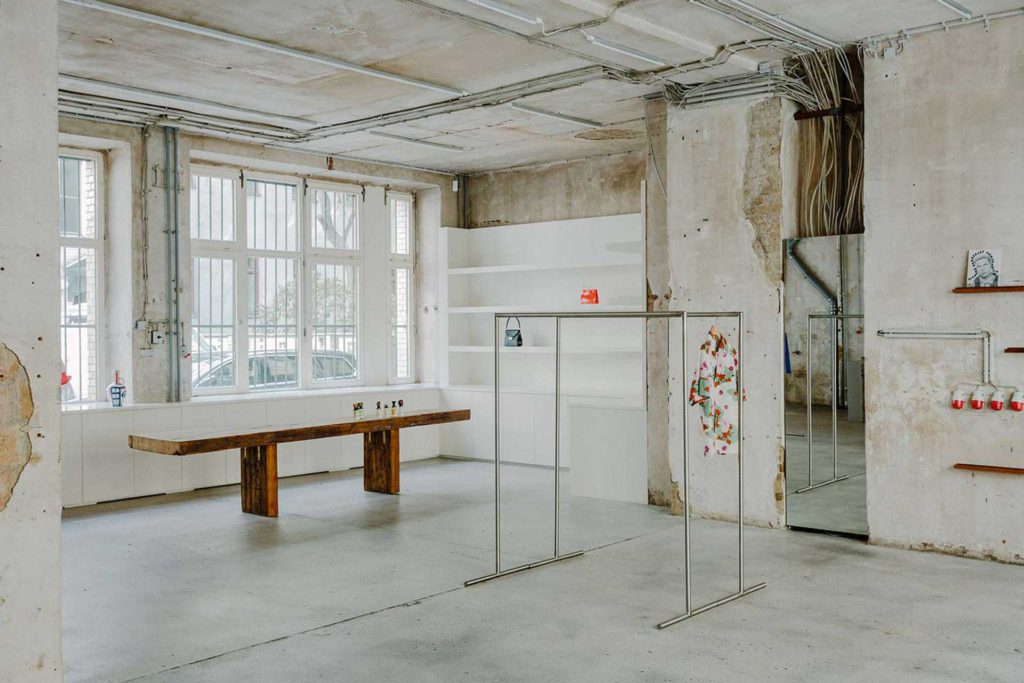 From the Berghain to the redevelopment of a former locksmith’s in the heart of the Kreuzberg district. In conversation with Herbert Hofmann, buyer and creative director for Voo Store

Voo Store, Berlin In the heart of Kreuzberg

Voo Store opened in December 2010 following the redevelopment of a former locksmith’s. It is a space of 300 square meters inside a courtyard on Oranienstrasse, in the heart of the Kreuzberg district – the one with the highest population density and frequented by students since the reunification of the city. Its founders are brothers of Turkish origin, Kaan and Yasin Müjdeci. The first-born, Kaan, is a film director – winner of the special Jury prize at the 71st International Venice Film Festival with his debut film Sivas. The second, Yasin, is an entrepreneur, who manages both businesses and their 50 employees, from 22 different nations.

Voo Store is located inside a courtyard and takes inspiration from other concept stores, like Opening Ceremony in New York or Storm in Copenhagen, as well as from workshop spaces and online sales like Modulor.

Displayed next to one another are handmade screwdrivers, light bulbs, jewelry, books and sneakers – without any logical criteria, it would seem. It appears on the BOF list of the top ten most influential shops in the world – excluding those in the four fashion capitals, Milan, Paris, London and New York.

From high fashion to streetwear at Voo Store Berlin

How designers are selected: the criteria is to identify garments, accessories, cosmetics, design objects, stationery, books and magazines that have the potential to last more than a season, avoiding any short-lived fads. Bestsellers include Nike and Acne Studios and the range varies from year to year, from Prada, Issey Miyake, Converse and Eastpak, from high fashion to streetwear. Still in Oranienstrasse, at number 181, Voo Store has opened a new space called Compact Market. A sort of archive, which collects a selection of pieces from past collections, sold at reduced prices. In the words of Yasin: «We have created an extra space for keeping timeless products which, though sold at a reduced price, have not lost their value. In that way we are also supporting the district, creating a bigger attraction to our street».

Herbert Hofmann, buyer and creative director for Voo Store defined his selection criteria as «a representation of our life choices more than an invitation to consumerism. To give three examples: in the coffee shop, Companion Coffee, we serve the best coffee blends in Berlin, we sell bicycles because we prefer them to cars, we have Austrian rock-climbing backpacks. We strive for a conscious lifestyle rather than a display of labels» – in an interview in 2014 for Sportswear International. Companion Coffee serves a selection of coffee blends and hand-sourced teas, together with an array of home-baked products. In the online store, which is user friendly, like a blog, there is a journal section which presents all the latest releases and hosted events, communicated on social networks and through newsletters. At Voo Store, there are exhibitions, readings, concerts and showcases for new works by established or up-and-coming designers and artists. As Hofmann states, in the same interview: «Our favorite way of communicating is through the events we host: the interaction between those presenting their work, the customers and our staff is the best way to show what we love».

The decor of Voo Store has intentionally kept the walls as they were when it was a workshop: rough textures, glimpses of bare brickwork. «No one on our team studied fashion and we all have lots of other interests, which keep our feet firmly on the ground». Units and shelves have been designed for the shop as well as for the café by Danish architect Sigurd Larsen, Herbert Hofmann’s partner.

Sigurd Larsen, after a Master from the Royal Academy of Fine Arts, School of Architecture in Copenhagen and jobs in architecture firms in New York, Rotterdam and Copenhagen, settled in the German capital, where he teaches at the Berlin University of the Arts. He met Herbert in the techno club Berghain, (best club in the world according to DJ Magazine in 2009), situated on the boundary between the Kreuzberg and Friedrichshain districts – whose suffixes provide the name – and located inside the premises of a former electric power station. Herbert and Sigurd cohabitate on the fifth floor of an old building in the center of Graefekiez, still in Kreuzberg. Their home contains Sigurd’s collection of minimalist furniture and unusual objects found by Herbert. The couple has published two books: Freunde von Freunden: Berlin, and Freunde von Freunden, a tour of the German city and of the world looking for the most creative workplaces and private homes. From their apartment you can access the roof of the building, for a view of the district and the city.

Voo Store is a concept space located in the heart of Berlin Kreuzberg, occupying a 300 square meter courtyard space on the ground floor of a former locksmiths. The street on which the store sits continues to attribute itself to its approach to contemporary fashion.