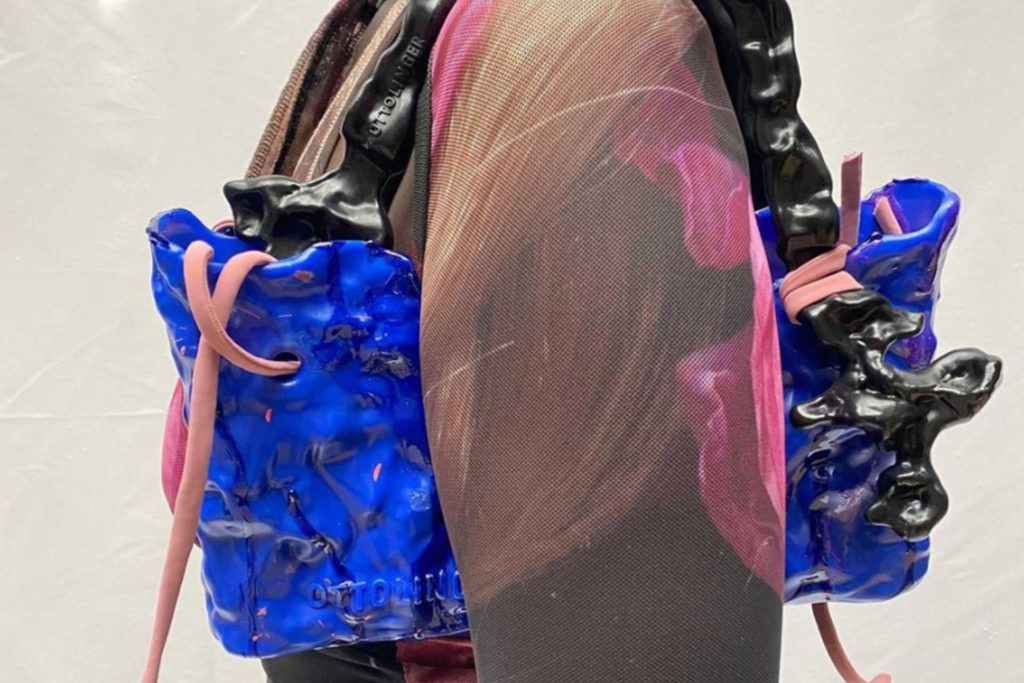 Cosima Gadient and Christa Bösch are ripping and burning the fashion playbook in a most literal sense, creating garments that do more revealing than concealing

For creators of avant-garde and envelope-pushing fashion, the pair of visionaries behind Ottolinger had humble beginnings. Cosima Gadient and Christa Bösch both were born and raised in the Swiss countryside, away from the hustle and bustle of metropolitan life and the fashion scene. For Bösch, being a designer had always felt like an unattainable dream: she grew up on a farm in the mountains, in a village of 400 people, none of whom were involved in fashion or the arts. It wasn’t until she moved away to Zürich to study law that she made contacts in these fields, sparking a fascination that resulted in switching career gears and abandoning law in favor of fashion design at The Institute of Fashion Design in Basel, where she met Gadient – a fellow student and her future partner-in-business. The idyllic Swiss childhoods that they’ve both experienced have impacted their creative work in ways more than one. On a surface level, parts of their collections (like the edelweiss flower patterns) have been inspired by traditional Swiss clothes, finishing, fabrics, and craftsmanship, but adapted to their own alphabet. On a deeper level, though, it instilled in them a strong conviction regarding sustainability, which they believe should be the standard in all industries and aspects of life. Recently Gadient and Bösch put their money where their mouths are when, in early 2021, they embarked on a collaboration with ISKO, a denim brand committed to innovating denim through sustainable technologies.

Though Switzerland remains wedged in their hearts, the pair of creatives have embraced the cosmopolitan lifestyle, having shown collections at both New York and Paris Fashion Week, all the while working from a studio in Berlin. It was the latter city that provided their brand with a name: Ottolinger was the family name of their first studio’s neighbor. The studio was a cramped space connected to a house, without so much as a separate mailbox, and so all the mail arrived addressed to Mr. Ottolinger. Back then they were still looking for the most appropriate moniker: something timeless and abstract, to avoid unnecessary connotations. One of them suggested Ottolinger in jest, but the inside joke stuck and so did the name. They made their debut during the lineup of VFILES fall-winter 2016 show. VFILES has existed on the intersection of talent incubator, boutique, and online fashion community since 2012 when Julie Anne Quay came up with the idea, and each season it provides for young designers the space and opportunity to present their collections at New York Fashion Week. It’s become a fashion fortune teller, predicting brands on the brink of making it big. For Ottolinger, it only took two years to receive a nomination for the LVMH award in 2018. Today the designer duo can boast about their array of celebrity clientele: the brand’s edgy cut-outs and mesh creations are beloved by the likes of Dua Lipa, SZA, Arca, and even Kim Kardashian. The latter might have discovered them via her husband Kanye West, who had hired Gadient and Bösch as head creatives for his Yeezy Season Four collection.

Visual parallels between West’s merchandise and Ottolinger’s collections do not strike as obvious initially, the latter being more nuanced and intricate, but they share a sportswear-meets-loungewear base and the ability to generate hype. While the cut-out trend, which remains prevalent in 2021, cannot be attributed to Ottolinger alone – trends do not appear in a vacuum – it has been their key motif from the very beginning. The brand from its conception has championed a rebellious take on craftsmanship, as explained in their interview with Paper Journal: «We like to play with the word ‘couture’ and challenge the luxury fashion’s status quo. We like to question certain things, challenge certain rules or expectations of how things have to be done or look». Subversive basics is a theme du jour in 2021, but Ottolinger leads the pack when it comes to deliberate disintegration, mapping out each tear with laser precision and mini blow torches (sometimes substituted by acid).

Bösch herself admits to going overboard with intricacies: «In past collections, we’ve made dresses that have been complicated to put on». Instructions for garments with multiple ties had to be provided in the box alongside the receipt. Other signatures include bodycon dresses with cut-outs and slits; strange accessories like rubber-dipped crystal necklaces; and abstract prints often concocted with the help of artist friends. This time their collaborator was German artist Lucie Stahl, whose abstract florals adorned several of the looks. The looks ranged from stretchy jerseys in punchy colors, somewhat like athleisure pieces one might wear to a barre class; swimwear with rips in the most unexpected spots around the bust, as if attacked by piranhas; deconstructed denim co-ords with seams providing a futuristic structure, to long coats with sleek tailoring that reveal the duo’s sci-fi inspirations. Several body-hugging looks featured wiring, either as a tool for distorting the garment and the body underneath; or around the body, as some portable 3D installation – the only use coming to mind is enforcing social distancing by physically fencing oneself in. The collection reflects a spectrum of emotions floating through people tentatively exploring post-lockdown freedom. There’s lust in the barely-there bikinis and dresses with holes like Swiss cheese, neurotic kookiness in mismatched plaids, stiff awkwardness in the wires.

Based in Berlin but born out of Switzerland, Ottolinger is a collaborative project between Christina Bosch and Cosima Gadient.