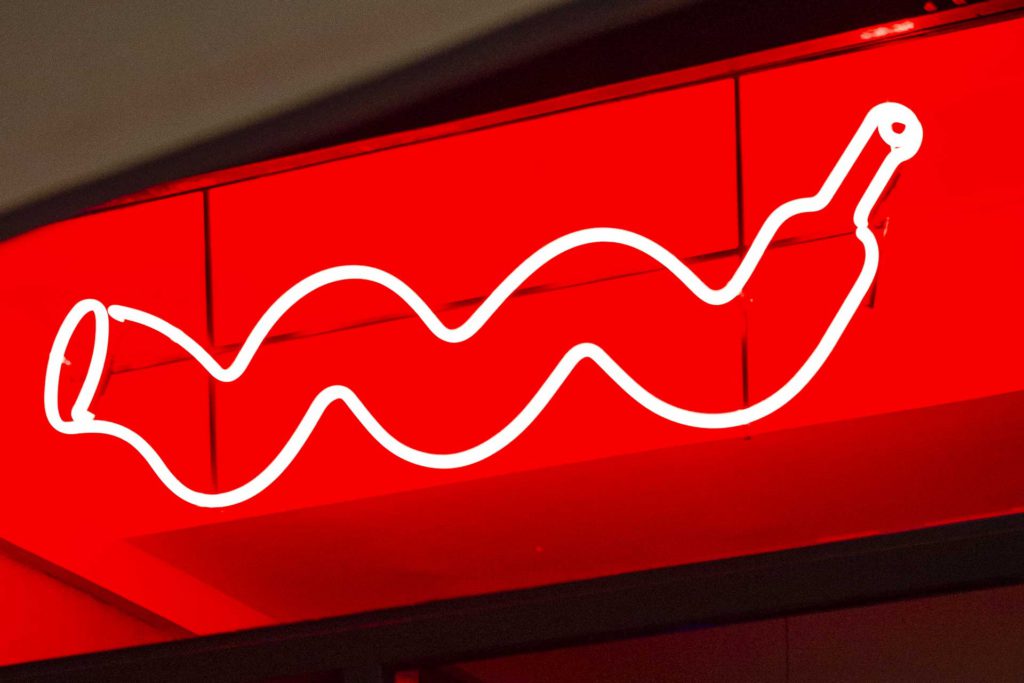 Palinurobar, Milan. 500 labels of natural wines and musical research in a café from the Eighties

At the entrance, an area is dedicated to an assortment of magazines – design, art and food themes available for consultation: «We like the idea of desacralization», explains Davide Coppo, one of the four owners

«It’s our song. It came to us automatically to call it like that», says Fabrizio Vatieri, one of the four founders of Palinurobar in Milan, on Via Paisiello, in the Città Studi area. «Having imposed a musical soul, the idea of calling it with the title of a song appealed to us even more».

The song is ‘Palinuro Bar,’ a track by Neapolitan singer-songwriter Nino Buonocore from his 1980 album, Acida. «We often listened to it together when Antonio worked at Champagne Socialist, where he was the host. It’s a song about a day in a bar. When we took over the place we said ‘we can only call it Palinurobar», adds Davide Coppo, one of the other partners.

Vatieri is a trained architect originally from Naples. He currently works as a photographer, videomaker, musician and DJ. Represented by Nowhere Gallery in Milan, he explains: «Here I manage in a practical way the musical part. Each of us has a specific skill, but we always try to share our ideas. In the bar I follow the photographic and musical part. Nicola designed the logo and is in charge of the visual identity and graphics».

A lover of Karst wines, Nicola Nunziata is a visual artist and designer who trained in Naples and Venice. Together, the two founded Op-Fot, an independent photography and video studio that works with brands such as Fontana Arte, Driade, CP Company and publications such as Wallpaper, Domus, La Repubblica and Rivista Studio.

«I’m the one who wanted to open a bar», says Antonio Crescente, the innkeeper originally from Puglia: «I’m from Barletta. I left my town when I was eighteen to become a footballer. When I realized that this was not my path, I enrolled at the University of Gastronomic Sciences of Slow Food. There my love for wine was born and it is connected to the story of my two great-grandfathers. One worked as an oenologist and the other as a wine industrialist in Puglia».

Coppo is a journalist and copywriter. Coming from the world of literature and publishing, he has been part of the Rivista Studio team for over ten years: «Apart from Antonio, who works as an innkeeper, we all want to pursue our own paths and then, like a river, let the waters of publishing, art and photography flow into the bar».

Palinurobar has a cellar with more than 500 labels of natural wine from all over the world. Natural wine is produced from organic grapes, with no other substances added except for small amounts of sulfur dioxide – which should not exceed thirty milligrams per liter. In order to be considered natural, the wine must be produced by independent producers with their own vineyards, with low yields and by means of a natural agronomy which excludes the use of synthetic pesticides, herbicides or insecticides. Grapes must be harvested by hand, fermented spontaneously and without using yeasts or enzymes.

The selection made by Palinurobar includes wineries producing in territories such as Carso, Etna, Calabria, French Jura and Spanish Meseta. Wines are carefully evaluated according to the production and quality criteria. Besides technical aspects, great importance is also given to human and direct choice: «All the wines you see here have been tasted. Nothing is proposed that has not been tasted before. They are all wines with a high rate of humanity», underlines Crescente.

To this day, there is no legislation which defines what natural wine is and a production criteria to go with it: «It is a protocol that does not exist. However, it is universally recognized and accepted», explains the innkeeper.

Moreover, the aspect of sustainability is fundamental, inherent in this kind of wine: «These producers, in order to make good wines, must be in harmony with the environment they work in, therefore it is normal they have sustainable practices».

Not only are they entrepreneurs, but they are also a research group. Through this, the four gave life to their first wine experiment, a project made by four hands: Crescente took care of the blend, Vatieri the drawing, Coppo the texts and Nunziata the layout and graphic design of the label.

In this ecosystem which moves around wine, food also plays a role: Palinurobar offers dishes made with quality, raw materials and characterized by a research on preparations. Oysters, first of all, but also fermented products provided by Pioppo Tremulo, cheeses arriving every two days from Apulia, pickles, smoked fish from the lake and cold cuts from both the land and sea. The recurring word is ‘Mediterrano’, with a look towards Nordic and Middle Eastern cuisine, in an experimental key: «Everything we do has a spirit that can be found in the concept of Mediterranean, which means cultures, crossings. Therefore, in our cuisine you can find beet hummus with fermented giardiniera to be eaten while listening to a Turkish piece, sipping a Slovenian wine, in the name of hospitality». Palinurobar’s signature dish is bread, butter and anchovies, served on a tray designed by artist, Fausto Falchi.

Music and magazines: the ecosystem of Palinurobar, Milan

Music is part of Palinurobar’s identity and a space complete with console, turntables and a high fidelity system. Fabrizio says that there is no dominant genre, but an effort of research in the field of music. One of the places of reference for the group is the Brilliant Corners, a Japanese restaurant in East London, renowned for jazz music but also experimental and with a wide range of natural wines. Their idea is to create projects associated with research: «For the opening days of our bar we asked a range of people from various fields including contemporary art, design, architecture, to create playlists for us. We associated images of parakeets that I took in the Lambro park – they are animals that are not native to these areas and therefore carry a concept of ‘disorientation’ – which is what we want to arouse in our customers». Based on this principle, at Palinurobar you can listen to Flipper, Funkadelic, a Sun Ra record or an Acid House dj set. Vatieri adds: «There is no mood, but we play what we like. Certainly the concept that recurs is that of Adult Oriented Rock». Known by the acronym AOR, it is a musical genre which was developed in the Eighties and linked to the most melodic fringe of Hard ‘n’ Heavy music. It is characterized by instrumental constructions where synthesizers and keyboards have a primary role, as described by Vincenzo Ferrara in his book ‘AOR. Adult Oriented Rock. Complete guide to the genre and albums‘. Among the bands and artists of AOR: Survivor, Journey, Asia, Magnum, Foreigner, Bon Jovi and Bryan Adams. DJs, artists, wine producers and designers take turns at Palinurobar’s console to present their tracklists.

At the entrance of the bar, an area is dedicated to an assortment of magazines provided by Reading Room, chosen by Coppo, with design, art and food themes. In addition, there is a selection of artist’s books, selected by  Nunziata. All the texts are available for consultation: «We like the idea of consultation. We are planning a stand where they will be more visible and usable. We like the idea of desacralizing these magazines, all with a certain design and a certain paperback, of having them be conceived as if they were an issue of Gente in the dentist’s waiting room», says Coppo.

The design and furnishings of Palinurobar and the Città Studi district

Palinurobar is located in the premises of a café from the Eighties, from which the wooden interior has been preserved — the counter and the boiserie of the walls — integrating them with the lighting and neon outside, the bottle rack, built from scratch and the wooden outdoor area, handmade by the four guys. Design pieces, such as the P08 chairs designed in 1991 by Justus Kolberg for Tecno and custom made benches by NM3, were also included.

Coppo says: «We chose this place because we fell in love with the interiors. I knew it because the editorial office I work for is on Via Garofalo and I used to come here to drink coffee. There was a daytime bar, the Cafferino, run by two ladies who were beloved in the neighborhood. They had created a fondness for this place that we carried with us. This spirit of passing the baton was felt positively by the neighborhood».

Although the choice of the area was random, dictated rather by the presence of the bar, Città Studi proved to be a neighborhood of great cultural ferment. Surrounding Palinurobar are art galleries, PR agencies, fashion showrooms and independent magazine editorial offices. «We’d like to create a sense of community through music and events so that this place becomes a center of gravity around which things, people, and energy begin to revolve», Coppo concludes.

Wine bar in the Città Studi area with a selection of natural wines, a proposal of experimental music and a newsstand with independent magazines and artist’s books for consultation. Palinurobar is a cashless bar – with the aim of fighting tax evasion and supporting sustainability in the ecological field.