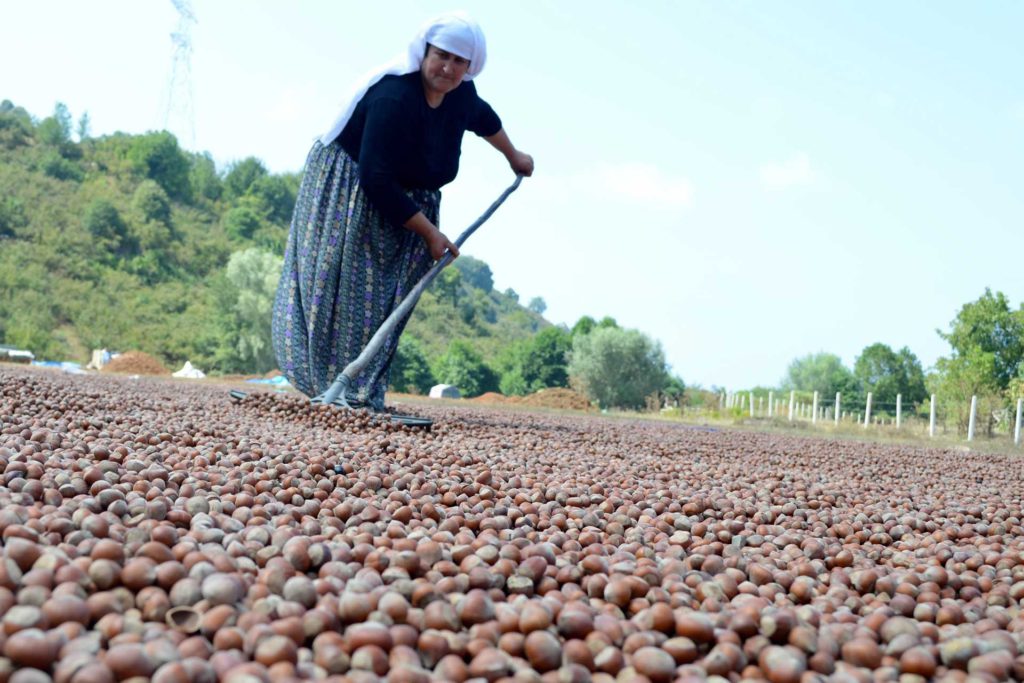 Pesticides used for hazelnut growing are not good for Italy

Is the Ferrero Hazelnut Charter beneficial, or just an act of greenwashing to avoid corporate social responsibility?

Hazelnuts are a highly lucrative commodity used by the Italian multinational Ferrero in the creation of snacks ranging from Nutella to Ferrero Rocher and Kinder Bueno. In order to create these well-known sweets Ferrero uses around twenty-five of the world’s annual hazelnut production, making them the largest single consumer in the world. the company operates in a number of different regions across the globe in varying scale and acquires its hazelnuts from a number of countries. At present, Turkey is the largest global producer and generates about seventy percent of the world’s hazelnuts, followed by Italy which produces around ten percent. The remaining twenty percent is split between countries such as Chile, South Africa, Georgia, Azerbaijan, Croatia, United States, Iran and Spain with smaller variable percentages. Depending on the annual harvest, Ferrero acquires most of the nuts it needs in Turkey and Italy, but has been looking to expand in other less-known markets as well.

As the world’s largest in-bulk hazelnut consumer, the Italian multinational has enormous power in setting trends within the hazelnut industry due to the sheer quantity of produce it acquires each year, and has recently created a document highlighting their commitment to community and environment. The report is called the ‘Ferrero Hazelnut Charter’ and was created in collaboration with the NGO Earthworm, an organization that aims to regenerate the world by changing the way certain contentious commodities are made and sourced, helping supply chains become more resilient and regenerative.

Until now, Ferrero’s sustainability efforts in partnership with Earthworm have mainly been focused on palm oil sourcing abroad, but in 2021 the Italian multinational decided to begin regulating resources closer to home. The aim of the partnership is to outline long-term commitments with specific short-term objectives to help Ferrero become a driver of change within the hazelnut industry, creating value for all. This initiative is of particular attention because at the same time the company aims to increase national cultivation by thirty percent, bringing the total of hectares dedicated to hazelnut cultivation in Italy from seventy thousand to ninety thousand in the next five years – as outlined in the ‘Ferrero Italian Hazelnut Project’. Because of the planned increase in production, it is essential that this growth happens consciously, with special regard for the environment and farming communities.

The charter designed by Ferrero x Earthworm can be found online and is based on three pillars meant to tackle the main issues within the industry: protecting human rights and social practices, protecting the environment by applying the principles of regenerative agriculture on its farms, and increasing supplier transparency by achieving full traceability. Due to growing tensions surrounding hazelnut production both in Turkey and in Italy linked to different issues highlighted by the charter, a change in the way hazelnuts are sourced and produced is much needed. In Turkey one of the principal issues is with the child and poverty-stricken seasonal laborers hired to pick hazelnuts, while Italy, a richer and more industrialized country, is lucky not to have these problems as farmers there tend to rely on machinery to help them collect their produce.

A second and more universal problem, faced by both Turkey and Italy alike, is of environmental nature and is concerned with the heavy use of fertilizers, pesticides and herbicides involved in hazelnut production. Although hazelnuts have hard shells and are subject to less pest-related issues than fruit like grapes or apples, they still require heavy amounts of chemical fertilizers used to assure larger yields, as well as herbicides and pesticides. The Tuscia region near Viterbo is one of the largest hazelnut growing areas in Italy and is facing increasing environmental issues linked to the use of chemicals in agriculture, like the eutrophication of Lake Vico which has caused near ecosystem collapse.

As of 2021 the lake has been deemed unfit for human bathing due to its high levels of toxicity, as documented by a number of Italian Universities, as well as the Higher Institute of Health, and the National Research Council in official documents published as early as 2010 and most recently in 2021. The Turkish use of pesticides is less monitored through time but in 2015 Coldiretti, the Italian Organization of Agricultural Entrepreneurs at National and European level, created a document ranking the most dangerous foods presented at the International Forum of Agriculture and Food in Cernobbio. The document was called the Coldiretti Dossier and was prepared following European guidelines monitoring the presence of chemical residues, additives, dyes and mycotoxins in different agricultural products from around the world. What emerged from the Dossier was that Turkish farmers overused chemicals in their agricultural practices with 276 products which were non-compliant with European toxin regulations, followed by China with 256, and India with 194. Of these products, hazelnuts were ranked as particularly dangerous due to their illegal levels of contamination with chemical pesticides and herbicides.

The Ferrero Hazelnut Charter created in partnership with Earthworm talks a lot about regenerative agriculture which is proposed as a solution to the current environmental issues. Earthworm says: «In regenerative agriculture you find ways to put more back into the farm than you are taking out. When it comes to chemicals, it’s about supporting a farmer to actively reduce chemical use and finding alternative treatments that are less harmful whilst also considering the impact that these may have yield and quality. It’s not a case of switching to organic overnight –  that doesn’t necessarily mean that you’re going to have a farm where there is more going back in than taken out – and it doesn’t mean the farmer at the center will be better off». The primary objective of regenerative agriculture is to increase the health, biodiversity, and organic content of the soil to improve fertility, but employing this approach means sacrificing levels of quality and yield. This is because the chemicals sprayed on hazelnut farms are principally nut enhancers, which increase yield, and pesticides, which increase quality as chemically treated nuts have no bug traces. The tradeoff is simple: spray chemicals and make more money selling double the hazelnuts, or avoid spraying your produce accepting the fact that many will not be deemed commercial quality by multinationals because of bug traces, and your production will be 50% lower than those productions who use chemicals.

Boris Saraber, Director of Operations at Earthworm, comments:’: «The truth is that organic models aren’t necessarily thinking about the systems approach here: you can’t just go from where it is to where you would like it to be ideally overnight because one company says it must happen. You have to find ways to change and that’s what we’re really trying to do and we’re not working in Italy on that challenge but we are active about creating solutions around that space to pilot ideas to innovate in this landscape setting in Turkey.. Finding ways to get behind those risk-taking farmers is key but it cannot be achieved from passing from the current status to biological overnight, its’ just not going to happen that way».

A number of academic papers have been published about the overuse of pesticides in the Tuscia and Viterbo areas, and in hazelnut production in general. Toxic run-off from the orchards ends up in the water streams which have become heavily polluted. Interestingly enough, the nearby regional government of Nepi has completely forbidden chemical use in hazelnut farms as the 45-year-old farmer tells: «The municipality of Nepi and the bio-district of the Via Amerina have passed a decree stating that because Nepi produces bottled water they cannot afford to have it polluted by hazelnut farm run-off and the only hazelnut cultivations allowed in the area must be biological». It seems that the municipality of Nepi has taken decisive action to protect its interests, going from where they were, to where they wanted to be overnight because one municipality said it must happen. Imagine the magnitude of the change, both in Italy and in Turkey, if the single buyer of twenty-five percent of the world’s global hazelnut harvest were to switch to biological helping tackle social and environmental issues linked to the use of pesticides.

Mr. Saraber explains that what needs to change is the focus on quality and yield of the hazelnuts:     «Making a clear commitment around Environmental and Social quality in addition to the traditional perspective of quality and yield is key. This signals a significant change and with that comes a journey to show how the environmental and social quality is being achieved in practice».

Of course, making a clear commitment to the environmental and social quality of hazelnuts is important, but even more central is changing the way we calculate quality and yield. As long as the largest hazelnut buyer in the world believes that heavily treated nuts filled with toxic chemicals, which are harming both our bodies and the environment, are higher quality than those with mild bug traces, change will not happen. The long-standing farmer in the region says: «When I use chemicals, I can make 100 quintals of hazelnuts. Then I sell them to Ferrero and Ferrero has 100 quintals available. If tomorrow I stop using chemicals and switch to organic, I will have less yield, maybe less than half because I don’t spray fertilizers and nut enhancers. With organic productions I would make forty quintals of hazelnuts. Where do you think Ferrero will get the extra sixty quintals? From Turkey of course – why wouldn’t I want to make more quintals if Ferrero allows the use of these products?». Highlighting the crux of the problem: as stands, Ferrero is not interested in any policy which may reduce the quantities of hazelnuts it is able to acquire across the world, even if they are causing harm to both farming communities and the natural world. Clearly, a great deal of doubt remains on whether Ferrero’s commitment is serious, or whether it is an act of greenwashing to avoid scrutiny. The doubt remains, and it will be up to Ferrero to clarify its true intentions through its actions. One action is worth a thousand words.

A non-profit organization built on values and driven by the desire to positively impact the relationship between people and nature.