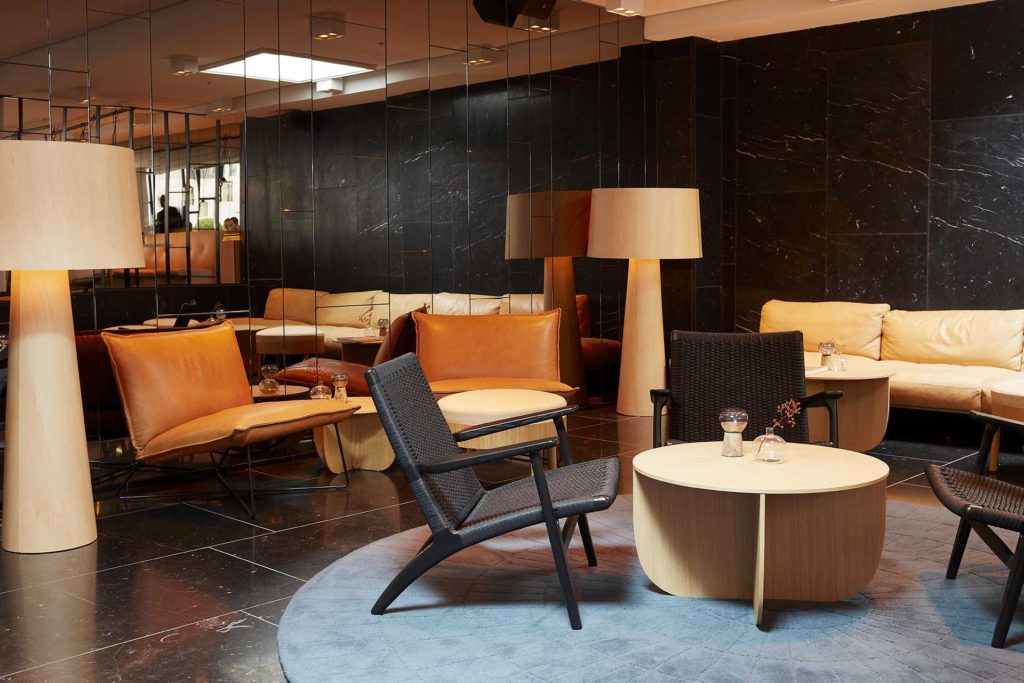 The penthouses were rooms for cello and violin musicians. The lobby area was the locker room and the Nobis suite was the audition room for students arriving at the academy

In 2007 – the Royal Danish Conservatory of Music  – reincarnated as the Nobis Hotel. Situated a few blocks away from the Central Station, Nobis is thriving in the heart of Copenhagen. Spread across several storeys, this hotel’s seventy-five rooms overlook the manicured Tivoli Gardens, the art mecca of Ny Carlsberg Glyptotek and the oldest amusement park in the city. «Whiff of candy floss and popcorn prevails outside the hotel entrance due to its proximity to the amusement park». The landmark property, spread across five thousand four hundred square meters space, is characterised with five meters high ceilings and neoclassical interiors. Housed in one of the first concrete buildings in Copenhagen, Nobis Hotel delineates a confluence of Italian hospitality, Swedish sensibilities, and Danish minimalism. The five-star hotel offers two in-house eateries: Noi restaurant and The Marble Bar. Wellness activities on-site abound, sauna, Hammam and gym.

Nobis founder and CEO Alessandro Catenacci has a knack for handpicking historical buildings and turning them into hospitality offerings. As he did with its five previous incarnations in Stockholm, Catenacci chose to convert an existing historical structure for Nobis’s first hotel in Denmark. «When Alessandro and the team came across this building, they were in awe of its grandeur and were determined to take over the property», says Søren Jacobsen, Community Manager.

Alessandro Catenacci was born in Rome, the oldest of five siblings in a family of restaurateurs. The family moved to Stockholm in the late Fifties, where Alessandro’s father Enzo worked in various restaurants as a chef. In 1980, Enzo and Alessandro together opened the Italian restaurant Caina in Stockholm’s Södermalm district, which earned the reputation of being one of the sought-after Italian restaurants in Stockholm. Here, four generations of Catenaccis worked in the kitchen and in the dining room. This tradition was renewed close to three decades later, when Caina restaurant reopened under a brand new guise in Nobis Hotel Stockholm.

The structure was built in 1903 by Martin Borch. The architecture of this landmark building suggests a marriage of Danish classism and Swedish design punctuated with mid-century furniture and artefacts. Designer and architect Gert Wingårdh choreographed the refurbishment of the building in 2007. The original brief was to forge an amalgamation of the old and the new worlds. Wingårdh decided to pay homage to the original structure of the building by retaining its key architectural elements. The Carrara marble staircase, the high ceilings and some of the vintage decorations were refurbished and juxtaposed with layers of modern design. «Wingårdh used natural materials such as various marbles, stone, wood, and glass as contemporary design accents. Flooring for all rooms was done with oak wood», adds Jacobsen.

The hotel’s seventy-five rooms are categorised as Nobis suite, Penthouse suite, Junior suite, Deluxe, Superior and Superior Loft. They come outfitted with wooden chevron-patterned flooring, crossbars as centrepieces, and high ceilings – painted in hues of blue, green and gray. The steel four-poster beds – flanked by Danish lamps – contrast with the 50s-style leather chairs and desks. A lacquered oak minibar tray and crystal glasses from Danish designer Frederik Bagger are present in the rooms for guests to stir-up their preferred nightcaps. Bathrooms are adorned with floor-to-ceiling Bardiglio Nuvolato marble – known for its fine-grained, deep gray tone. A fine selection of toiletries from the Swedish luxury brand Byredo are placed for skincare rituals.

The spirit of the music academy – that once housed in this building – still lingers in the air. The hotel’s atmosphere is reminiscent of its musical history. The penthouses were originally rooms dedicated for cello and violin musicians. The Nobis suite used to be the old audition room for students arriving at the academy. The student parking space got upgraded into Noi – the restaurant. The hotel’s lobby area was once the locker room filled with coat hangers and lockers for the students. As Jacobsen points out, «the marble staircase, that remains naturally bent, narrates the story of the students running up and down the staircase over the years. The architects kept the staircase worn down to showcase this facet of its history». Speaking of which, the reception desk is a polished block of the concrete. An artistic interpretation of the fact that the music academy was one of the capital’s first concrete-built structures. Further, Wingårdh design drew heavy inspiration from Le Corbusier’s Sainte Marie de La Tourette monastery from the late 1950s in Lyon.

Another restaurant of the same name by the Nobis group already exists in Stockholm. «Noi means “us” in Italian – we have a lot of Italian verbiage in our brand communications». The restaurant operates both indoors and outdoors. The interiors are adorned with furniture and fittings from Carl Hansen and Søn, Kasthall, and Duxiana.

Noi operates under the culinary leadership of Chef de Cuisines Fredrik Sandberg. Swedish by descent, he previously worked with the Nobis Group in Sweden. The forty-four year old chef is also responsible for establishing the renowned restaurant; La La La in Copenhagen. «We didn’t just need a good chef but also someone who understands our brand philosophy well and has a deep understanding of what the hospitality group stands for. He is a great leader and mentor for all the young chefs», says Jacobsen.

The restaurant kitchen runs on a zero-waste policy ushering nose-to-tail cooking, explains Jacobsen, «we take the whole fish and transform it into different dishes or condiments. If we have left overs – we eat it as staff food. This reduces the ecological footprint, makes the chef more creative, and reduces overhead costs. It’s a win-win for all». The menu focuses on modern European cuisine made with local ingredients. «We cater to a very international clientele hence we try to keep a bit of everything for everyone. Our aim is to offer comfort food with a high level of gastronomy». The restaurant’s bestsellers include: Red Prawns, Grilled Greens, Tapioca Chips with Herb Dip, Nobis Burger, Danish Jersey Tartare and Baked Rhubarb. At the moment, the team is planning to introduce more vegetarian and vegan dishes in the menu keeping in mind the high demand for plant-based foods.

The Marble Bar – fashioned entirely with black marble and mirrors – is the hotel’s in-house bar. A curated menu of heady signature tipples spiked with Scandinavian ingredients are served here. A metal structure stands between the bar and the restaurant inspired by Le Corbusier’s past works.

For the future the hotel team plans to revive the “Staircase Concert”, an old tradition established by the Royal Academy of Music. «Every year starting from the Seventies the academy hosted a Christmas carol on the marble staircase with open doors for public participation. This year we are planning to organise it in a similar format at our hotel to honour this timeless tradition», explains Jacobsen.

Nobis Hotel Copenhagen is the Nobis Group’s first property outside of their home ground Sweden. Founded in 1987 by Alessandro Catenacci, Nobis Hospitality Group is a family-owned group hotels, restaurants, bars, nightclubs born in Stockholm. The group has recently opened a new property in Mallorca, Spain.