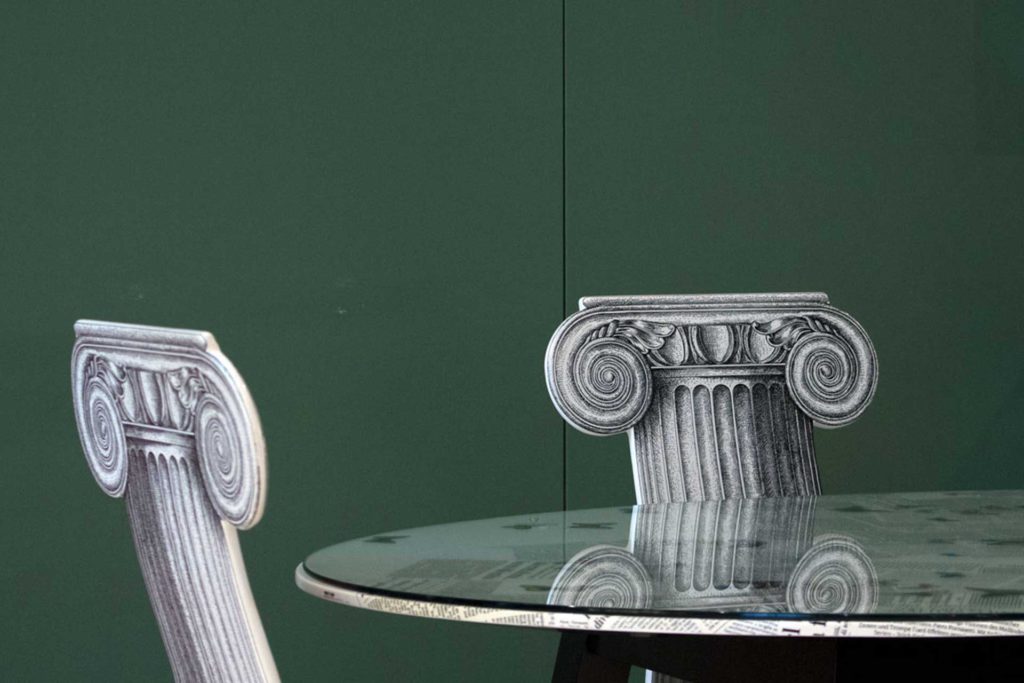 Courtyards are not the sole design attribute that gives reference to the city location. From designer Antonio Citterio to the materials, suppliers and design inspiration. Everything is sourced from and connected back to the city

The Mandarin Oriental Milan is a five-star hotel located in an Italian city synonymous with culture and courtyards. The property is one of thirty-four high-end hotels belonging to the Hong Kong-based Mandarin Oriental group. Located in cities from Bangkok to Barcelona and Munich to Marrakech, the hotel group marries the recognised cultural philosophies of Asia with influences respective to the location of each hotel. «The site was purchased in 2007. It took seven years for construction due to stop-and-go work during the refurbishment. Beforehand, the building was the location of a bank called Cariplo – the foundational bank of the Lombardy provinces. The transformation of this 19th-century property in Italy was a challenge. Still, we eventually achieved it alongside the architect, Antonio Citterio», says Luca Finardi, General Manager and Area Vice President of the Mandarin Oriental Hotel group.

Since its opening in 2015, the Mandarin Oriental Milan has strived to become a part of Milan’s lifestyle experience. To act as a point of reference for the Milanese community, says Finardi, is its goal. «Courtyards represent Milan. Every building here has a courtyard, though before the 1990s these were closed, or exclusively for guests of the residences. Milan has now evolved, and today courtyards are open to the public». This mission to be a lifestyle destination, accessible en masse, is addressed via the hotel’s design features. And the three courtyard entrances to the Mandarin Oriental Milan are a nod to this aspect of Milanese life. «The first courtyard is the main entrance, with a portico in front of the hotel. Then we have two other entrances: the Mandarin Bar and Bistrot – which is the heart of the hotel – and the entrance to Seta [the hotel’s two Michelin-starred restaurant]. The Mandarin Oriental Milan is a place where the Milanese community meet for breakfast, lunch, dinner, aperitifs, leisure, and business. When you come to stay at the hotel, guests have an opportunity to experience the Milanese community and see local life happening around».

A balance between cultural heritages

Courtyards are not the sole design attribute that gives reference to the city location. «Our designer for the Mandarin Oriental Milan, Antonio Citterio, is Milanese and the materials, suppliers and design inspiration is sourced from and connected back to Milan», says Finardi. «The designer strived to achieve a modern Milanese composition but with a timeless ambience». While some of the rooms are interpreted in an oriental manner, characteristics of the 1950s and 1960s are too present. There are one hundred and four rooms at the Mandarin Oriental Milan, of which thirty-two are suites and junior suites. «We have three signature suites. Two of them are dedicated to two Milanese architects. One, the Premier Suite, to Giovanni ‘Gio’ Ponti; the other, Fornasetti suite, to Piero Fornasetti». Amalgamating the work of Antonio Citterio, with references to Ponti and Fornasetti, the Mandarin Oriental Milan’s design proposition is further tied to the city in question. Striving to differentiate the Mandarin Oriental Milan, the architect employed an expansive open floor plan, explains Finardi. «When you walk into the Mandarin Oriental Milan from the main entrance, you see the entire space through this stretch which spans over 200 metres. You see the length of the Mandarin Bar and Bistrot, and after that is Seta. You can then discover two more courtyards, depending on which way you turn. This layout gives guests the impression of a space that is waiting to be discovered. We have bedrooms across five floors. On the top floor, the rooms have views over the city of Milan. On the basement level, we have our 900 square-metre spa, fitness centre and pool».

Striking a balance between cultural heritages, says Finardi, was of concern in the hotel’s development process. «Every hotel is individual and has a sense of place. [For Mandarin Oriental properties] what we seek is location. Our second focus is to find a way by design whereby every hotel has a local story. The Mandarin Oriental Milan is part of a hotel group which is based in Asia, and from this, we take respect and a humble approach. For example, our spa is a place where people can have a holistic experience. Here, guests can detox from the digital world and leave with newfound tranquillity. This experience is inspired by the spas of Asia». The spa, which is focused on connecting with the five elements – wood, fire, earth, metal, and water – is one of the hotel’s attributes that bears subtle reference to the parent company’s Asian roots. Inspired by Chinese holistic treatments and drawing from ancient medicine while infusing cosmetic technologies, the six treatment room spa – two of which are couples rooms – offers deep tissue massages, facials and body treatments. This formula of marrying the two cultures across the hotel group’s portfolio is steadfast. «The Mandarin Oriental in Barcelona was designed by Spanish architects Carlos Ferrater and Joan Trias de Bes and interior designer, Patricia Urquiola. Mandarin Oriental Hong Kong was designed by a Chinese architect. Every single property has an individual soul but is united by the same approach: the philosophy of a humble approach, and respect for guests and staff».

A holistic approach to sustainability

On the topic of sustainability, Finardi explains that the source of the electricity that fuels the hotel is renewable energy – a combination of wind and water, he says. As for the design process, sustainability and sourcing local too played a huge role in the interior execution of the Mandarin Oriental Milan. «Since our inception, we have avoided any materials which use toxic or harsh chemicals or materials, such as glue. The leading materials used in our rooms are wood and metal. We have tried to build the entire property around this concept and these principles. For example, in the Mandarin Bar and Bistrot, we use polychrome marble that is native to Italy, chosen and cut by Milanese suppliers from Brianza – an area near Milan where the furniture companies are located – for the hotel», explains Finardi. To be able to use local materials, from local suppliers and support the local economy is what is crucial to the Mandarin Oriental Milan, reiterates the General Manager. It is not solely about the sustainability of the production line, but the safeguarding of the economy itself that is a core value of the brand. For the hotel, the concept of sustainability is tackled with a more holistic approach that stems back to the community. This includes working with children’s charities, supporting families of children with disabilities, and employing refugees and staff with special needs. As a business that strives to be inclusive and diverse, previous offenders who are seeking a fresh start are among the workforce at the Mandarin Oriental Milan. «When you hear of their personal stories or how they have come to Italy, it is heartbreaking. But to see how hard they have worked, and how well they have integrated into the community, is wonderful. This is our hotel community», says Finardi.

This focus on sustainability translates over to the food and beverage office offering, too. «We are as local and biodynamic as we can be. Our food suppliers possess certificates that guarantee they are not using unsustainable practices, such as fish farming. We are completely single plastic-free – even in the kitchen. Now material’s are biodegradable and this is a key element for us», explains Finardi. The hotel offers multiple dining experiences. «Seta is our two Michelin-star restaurant managed by Antonio Guida, a native chef. He directs food and beverage experiences at the Mandarin Oriental Milan. Whether you’re dining in the restaurant or ordering room service, you can taste his cuisine. The Bar and Bistrot are for casual dining indoor and outdoor, and drinks are directed by our mixologist. The goal is to become one of the top fifty best bars in the world». Antonio Guida’s risotto is the signature dish at the Mandarin Oriental Milan. As it bears resemblance to the Italian flag, with its green, white and red hues, it is another nod to the cultural heritage of the city in question. «These colours were, in fact, by chance», confirms Finardi. Private dining for guests seeking a tailored experience is on hand for residents at Mandarin Oriental Milan, in addition. Aside from culinary experiences, the hotel is home to a pool, spa, and fitness centre. The wellness centre is open to non-resident guests, 65% of which are Milanese locals, says Finardi. The pool and gym are exclusively for hotel guests, unless you hold a membership card. For guests, the opportunity to avail of an ‘urban oasis experience’ – whereby they can enjoy massages on the terraces of their suites – is on offer. Additional facilities include an on-site beauty salon and hairdresser.

For those who seek to soak up the city surrounding the hotel, options sit on its doorstep. «We are next to cultural sites such as the opera house La Scala, which is five minutes walk. It is a ten-minute walk from the cathedral, and three minutes from the Via Montenapoleone and Via della Spiga – where the high-end shopping and retail is». Sforza castle and Da Vinci’s ‘The Last Supper’ is too within walking distance. «From the Seta or Bar and Bistrot entrances, you can walk into the Brera District, which is the cultural and lifestyle district of Milan in minutes. This area, which is historically one of the most well-known neighbourhoods in the city, is now pedestrianised, and Mandarin Oriental is at the heart of this. We have managed to give it back to the Milanese people as a pedestrianised area and this is another element of the hotel’s location which defines it».

A five-star hotel under the Mandarin Oriental hotel group’s portfolio that fuses Asian influences with Italian cultural reference points in the centre of Milan. The hotel features five floors of rooms and suites, a basement level with a wellness centre, pool and spa. Mandarin Oriental Milan is home to two restaurants – one of which is helmed by local chef, Antonio Guida, and holds two-Michelin stars.