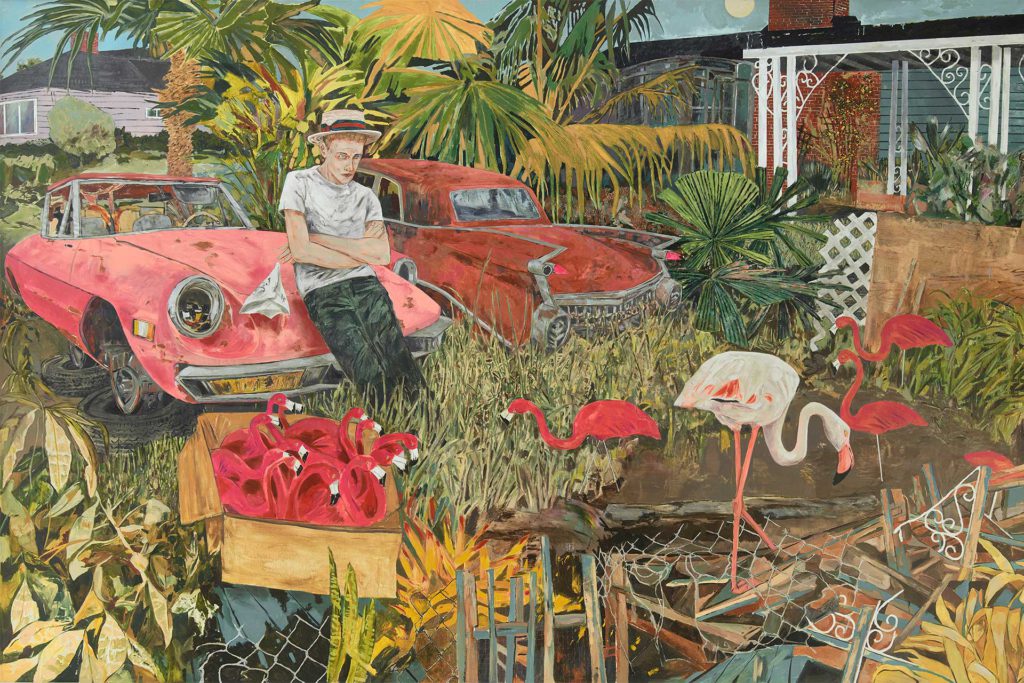 Hernan Bas: the otherworldly dimension of bizarreness and ambiguity

Paranormal Creativity – the American visual artist creates an encyclopedia of the weird with his works. «I put characters that don’t know who they are yet. They didn’t figure out where their place in the world is»

Nowhere in Florida. «The attraction to the otherworldly started when I was young. I grew up in Upstate Florida, in the middle of nowhere in the woods. It was an environment inhabited by Bigfoot, ufos and ghosts. If the world didn’t have any mysteries, it would be tedious and boring, and the unknown is a part of my work. In there, you never know what is going to happen or what has already happened», says painter Hernan Bas. The narrative aspect found in the works comes from both literary references and visual influences. «In my studio, I am surrounded by objects, photography and paranormal books. When I don’t know what’s next, I sit in my library, peek into my books and something that inspires me through the day pops up. It is about storytelling – and when you say storytelling people think you are talking about illustrations. The difference between what I do, and illustration is that you always illustrate someone else’s ideas. If you’re an illustrator, you’re given a text, and you have to translate that text in your style but it is still someone else’s idea. I’ve been drawn more to make my own ideas than to borrow from literature or from anything else in the last couple of years. I prefer to invent my stories where it is possible or at least take my twist». The influences include elements belonging to pop culture, Eighties’ vibes, visual tributes to American expansionists such as Mark Rothko and Willem De Kooning, narrative elements typical of soap operas, the lines of Memphis design, a decorative palette that recalls the symbolist atmosphere of the French group Les Nabis as well as the presence of oddities that seem to refer to a collection of the weird. What underlies his compositions is the intention to communicate the outcome of his explorations, prompted by a spirit of inquiry and shaped by bizarre discoveries. «The moment you find something that bizarre or you’ve never heard of before – and you assume that most of the people never heard of it either – there lies the instinct and inclination to go and find someone else to tell it to. In twenty years, such a work might be not only a visual reference to my painting: they would be able to look at these paintings and research all these topics that can open further doors».

The idea of queerness

A clarification on the concept of queerness. Although in contemporary parlance the word queer evokes an association with homosexuality and the discourse related to gender, for Bas the notion is more related to ambiguity in a broader sense. It unfolds as an attraction towards anything unknown, unfamiliar, or eerie. Such traits arise not merely from the blending of eclectic objects and forms but rather from the puzzling, floating-like attitude conveyed by the characters featured on the canvases. The sexualized undertone and the allusion to gay-ness are not explicitly depicted but rather imparted through the alternative dimension triggered in the gaze of the beholder. That is why his paintings might be addressed as homosexual, even though no complicit gestures with the motif appear, and no politicized either critical stance is voiced. «Felix Gonzalez-Torres is a reference – and he was a gay artist. When he had an exhibition at Hirshhorn Museum in Washington DC, politicians heard that this gay artist who had AIDS was having a show, and they were all there to protest. All they found in the exhibition was sheets of paper or piles of candies. There was nothing visually gay or vulgar in the works, so they had nothing to complain about and walked away with their heads down. I approach politics in the same way. There is nothing controversial in my paintings. The characters are just who they are, and they are not ashamed of it. If that’s political, that is fine with me, but my work will be seen as more political in the future than in the present. The characters deal with the same things that all of us deal with, whether it is hundreds of years ago, today or in the future: figuring out who you are is something everyone goes through».

Paintings as personages caught in moments of transition

The starting point in his creative process lies in providing room to the subjects by framing and inventing their universe. They are the fulcrum around which the plot of his visual storyline weaves and the protagonists of his artistic expression. Imbued with a halo and drenched into partially uncanny ambiences, the works address and forward the layering of the moments marking the individual unfoldment. Enriched by the potential of multiple meanings and open interpretations, the paintings are about personages caught in moments of transition. They can be described as androgynous presences somewhere between adolescence and adulthood, often portrayed alone or in intimate groups immersed in suspended outer landscapes or indoor locations. Here the devices surrounding them, and which occupy the space nearly obsessively, acquire singular connotations, revealing themselves as key elements of a growth process only partially conscious. «In my paintings, I put characters that don’t know who they are yet. They didn’t figure out where their place in the world is. The viewers have to discover something about them, to catch them in their ride. They can make a sense out of it by getting involved in the world surrounding them and through the other things coming along in the painting. I want people to be able to identify themselves with these characters, it is not a portrait of someone’s specific identity».

Lampoon review: Bas’s approach to the structuring of the canvas

Its content can be compared to the arrangement of a theatrical setting. The actors are given the role of the whole scenic construction. The narrative sequence emerges from the delineation of the cast, together with what is about to happen or has already occurred. The background serves to contain and foster the script and adds further details to the image. Everything is meant to enable the audience to understand what the action is about. Bas installs a polyphony of shapes and colors filling the scene, generating a variety of perspectives and associations. The density of the staging is an encouragement to dive into the mysterious. Haunted by the emptiness of space as a state to be eluded and by the perturbations immortalized in the painting, the artist invites the observer to wander on the surface and discover a source of identification and resonance. Stillness and movement, reality and dreamlike vibe, intimacy and exposure offer the spectator the opportunity to trace a personal path across the stage. Plants, exotic animals, inanimate objects, flowers and oneiric moods stimulate a synaesthetic experience once interacting with the subjects. «When you look at the painting is the moment right before the curtains close. You don’t know where the story will go from there, and you are left with that question and mystery. It is up to you to fill the plot. And it is about moments where pure curiosity is at its highest peak. When I look at other’s art, what I appreciate is if it makes me curious».

In the male figures, an injection of ironic components is present, simultaneously disturbing and amusing. According to the artist, the humor is a reaction to the overly serious tone often imparted to artistic discussions and an integrated element of his creative process when alone in the studio. Wit is more apparent in the titles he crafts for his works though than in the visual impression they contain. Evidence of this tendency is embodied in the series entitled Unknown Poets. It consists of portraits of fictional poets, and the grave temperament of the expression together with the solemn connotation rendered by the gold leaf backdrop contrast with the winking and jeering words of the captions, which engage in a playful tone with the reader. In Bas works, temporalities collide, fictional figures enter into dialogue with the public, the objects become thresholds to mixed interpretations. From his constructions arise personalities that are vulnerable and emancipated at the same time.

Hernan Bas (b. 1978) is a visual artist who lives and works in Detroit and Miami. He creates mid- and large-format paintings inspired by literature, art history and contemporary culture, and he’s interested in experimenting also with other media such as photography and film.