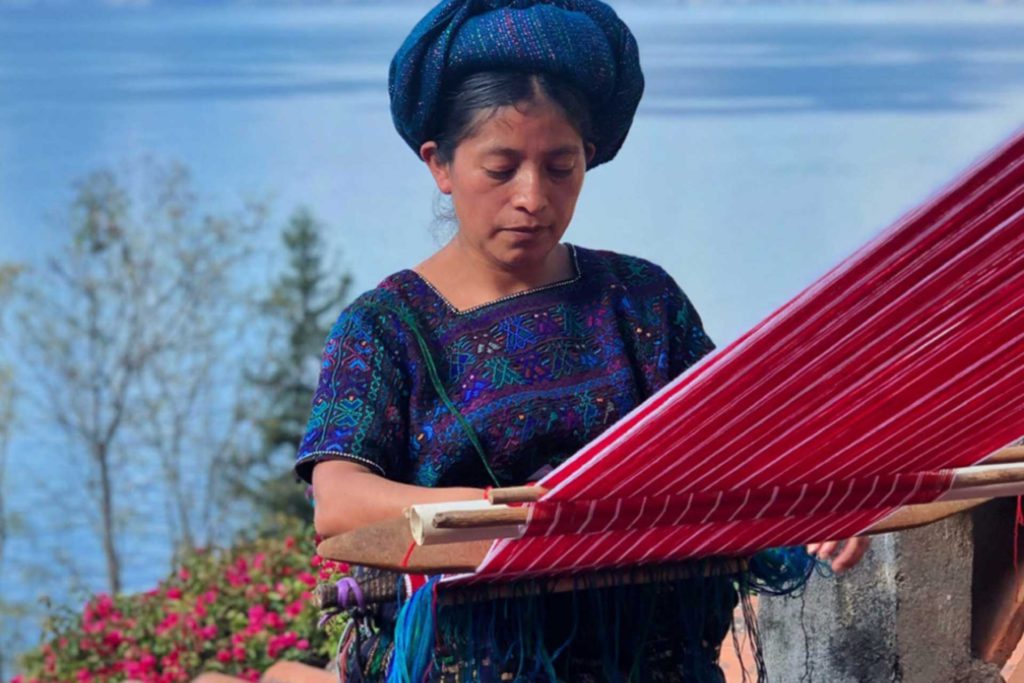 The collaboration between Livia Firth, founder of Eco Age and film producer, and director Andrew Morgan began in 2014 with the production of the film The True Cost, a documentary revealing the environmental and social impact of the fast fashion system. For the first time, issues unknown to most were disclosed in a distressing manner, featuring people and locations involved in this industry. Fashionscapes is a project which originates from the idea of illustrating a series of solutions to issues highlighted in the previous film. It is shown in fifteen-minute episodes that investigate different aspects of production chains. For example, the first episode deals with wool production in Tasmania, while another is filmed in Guatemala and investigates the role of Mayan women artisans and craftsmanship. The third discusses the diamond supply chain in Botswana and is the last episode filmed prior to the advent of Covid. This particular episode encouraged a discussion around the living wage treated in the fourth episode which analyzes the problem of unreasonable salaries in the fashion production sector. Although done remotely, and through sending crews to locations affected by the topic at hand, this remote format received positive feedback, supporting the making of the fifth episode: Fashionscapes, a circular economy.

Firth explains that the theme was determined by the diffusion surrounding the circular economy trend. How companies try to promote their commitment towards a circular economy without understanding what it is. The need to inform and educate on the subject was key; choosing to showcase it through a short film adds power to the message, increasing the level of impact it has on people. The documentary begins by highlighting the phenomenon of unbridled production on the brand side and the compulsive consumption on the user side, explaining that current production is around more than 100 billion garments each year. The focus then shifts to the damage of this model on ecosystems and people living in less developed countries. Journalist and author, Lucy Siegle, focuses on exploring the exploitation of the earth’s resources per year: equal to about 100 billion tons, nearly all of which ends up polluting. The speakers involved in the documentary stress that circular thinking could be a solution to the issues we face with the current fashion production model; not simply communicated through greenwashing communication but implementing it. The following images are of waste generated by the garment industry in landfills around the world, with particular attention to the Kantamanto market where used clothing arrives with the purpose of being reused by local workers. Highlighted data reports that fifteen million garments are delivered each week in a country of approximately thirty million people. Samuel Oteng, an upcycling designer, explains that over the years the quantity of clothing has increased while the quality of these clothes has decreased. As much as it seems that this system is helping less developed countries through circular reuse, this is not the case. Often these garments are unsellable due to their quality and, whilst menders try to recondition them for other uses as well, most of the items that arrive are devastated from the overproduction-over consuming system, explains Oteng.

Flaws of the linear fashion production

The documentary goes on to highlight how the current business continues to focus on a linear model within a take-make and waste system. The increasing use of polyester has disfavored the use of natural fibers with the belief that synthetics are more sustainable in some respects, explains Firth. With the exemption of incineration, plastics cannot be disposed of, even including through long-term recycling. Different methods are returning to the production of natural fibers, developed within the farms. In the film, they focus on wool; Australian producer Charles Massy explains how industrial farming techniques took over. After a drought season that caused damage to his land, his approach became regenerative with respect to cultivating the soil and its functions. The damage to the ecosystem has been significant and guided by multinational production with the power in the food and fashion industries, continues Massy, but the regenerative technique is healing that. When dealing with issues of ethics and sustainability, Firth reiterates in conversation with social sustainability researcher, Dr. Hakan Karaosman: people need to be also considered. «The fashion business has become so profit-driven that we forget the connection between human and fashion, transforming it from a dream into a nightmare», affirms Karaosman. Although interconnected with environmental sustainability, analyzing social sustainability can be more complicated in terms of quantifying and establishing indicators that lead to short-term improvement, he explains: a holistic shift is needed.

Plastic, in the end, is still plastic

Analyst, Veronica Bates Kassately, stresses on the danger of plastic, reporting that every plastic piece produced is still on our planet and that polyester is either natural gas or oil. «Plastic is a material that causes problems at every single stage of its life cycle. There are materials for which there is no need to be alarmed and this is an indicator for understanding the potential for circularity that could be useful in a closed-loop environment», affirms Siegle. In no way can the convenience of synthetic fibers over natural fibers be determined simply by looking at the environmental and socio-economic impact. Another attempt to discuss the possible solutions to the application of circularity in fashion is given by Alberto Candiani who, within the documentary, describes the evolution of the brand, Candiani Denim, towards complete circularity, ensuring an economic future. Central to this approach is sustainability, a core concept of the brand to create and innovate, Firth tells. Candiani Denim, for example, has created a series of biodegradable and compostable fabrics. For nature, this means the implementation of biofertilizer for cotton crops. Not only are ingredients key, Candiani explains, but also a certain amount of pioneering technology research is needed. Such as the invention of non-synthetic elastomers derived from natural rubber to create the world’s first biodegradable stretch denim. Firth explains that the problem is in the impact measurement methodology which starts from the production and ends the moment the garment is bought, without dealing with the actual disposal.

By analyzing the testimonies collected, the key to evolution with respect to this issue would beto abandon the industrialized model of scientific advancements to reformulate objectives according to the natural cycle. «In recent years, the role of Eco Age has changed compared to the past. Previously brands had to be taught the need to operate in a sustainable way; now brands want to flaunt their work through marketing strategies that have little in the way of sustainability», says Firth. For this reason, the investigative genre of the documentary needed to be portrayed in Fashionscapes. Even though the information covered should be transparent, it was necessary to dig deeper into the much acclaimed and publicized initiatives such as planting trees, becoming carbon neutral and the paying of living wages. Firth highlights how citizens and consumers have great power in terms of choosing what and from whom to buy: «They vote with their wallets every day». Brands are the other part involved in the dialogue, trying to conform to the conscious citizen; needing an update in the way of conceiving the business, whilst simultaneously steering away from the waste of resources, the exploitation of the workforce and not disappearing from the market. Governments are also involved in this conversation. Even with difficulty to influence citizens, they should create regulatory laws. Kassately, in the episode described above, states how in the fashion industry, the term circular economy seems to give permission to buy, with the pretense that the brands are able to either recycle the fiber later, or can deal with the collection and disposal of garments or can donate them to the neediest. Recycling and take-back programs are not the solution, considering that the extensive use of plastics and synthetic material mixes makes it impossible to recycle raw materials. The problem that afflicts the global production process can be summarized in Firth’s words: «The economic system has been based on the exploitation of a segment of people living on the other side of the world; change starts with treating all human beings in a fair way and guaranteeing their rights. We wouldn’t be here talking about the environmental impact of fashion if slavery didn’t exist; fast fashion is based on this». This system will never be able to conform to ethical and circular production because paying wages appropriately and choosing natural fibers would make the costs too high to maintain production and the low final price.

Beginning her career as a film producer, already with a focus on the documentary genre, Livia Firth is co-founder and creative director of Eco-age. She has always been active in environmental and social issues.

Communications and strategy consultancy with a focus on sustainability. Its twelve years in business have made it an authority in the field and have seen collaborations with NGOs, governments and change-makers in all sectors.