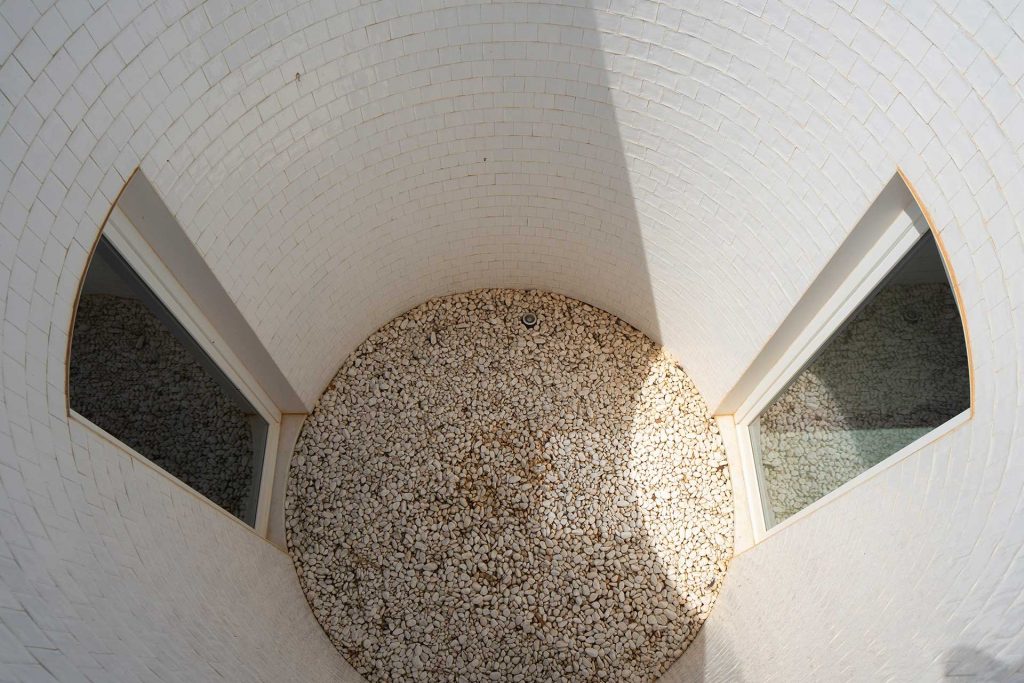 Casa na Terra, Portugal. Feeling at home in a cave in the heart of Alentejo

A dome conveying the impression of being carved by digging into the soil – which, by framing one’s view through its concavity, opens up towards the landscape

João Rodrigues, the founder of Silent Living, has been involved in business since he was a teenager, thanks to a family legacy of entrepreneurship. Getting to know people, countries, cultures and foods led him to train as a pilot, and he is captain on long haul for TAP. João lives in Lisbon on the last floor of Santa Clara, one of Silent Living’s properties, but the story of Silent Living started by accident.

The first house to become part of the project, Casas na Areia, located in Comporta, was the family’s summer retreat – and a place for friends to borrow. In 2008, to João’s surprise, it was chosen to represent Portugal in the Venice Architecture Biennale. As he was flying back to Portugal, he started to wonder: «why not rent out the house and share it with other people»? The idea was to maintain the house while balancing their expenses, but the first years of management ended up introducing João to the world of hospitality. In the 2000s, Portugal was unknown, as João recalls. Nobody knew about Comporta, a village next to the Sado estuary, to the south of Lisbon; their houses were seen as a destination by renters, who wanted to stay in the properties. The reason behind the project, at the time, was people’s interest for the architecture. The choice of locations, materials and atmosphere, the stance towards nature, the idea of locality and simplicity, a sense of protection and family were a foundation for the birth of Silent Living. «Memories belong to each of us and don’t have to be shared». One of the experiences that influenced João’s perspective on the project was an evening he spent with his parents in Casas na Areia. «When my parents arrived, they were formal. They asked me: should we take our shoes off? They ended up taking them off. Having their feet on the sand helped them relax, and we had a meal together. I remember my parents laying on the sofa in an embrace, something I had not seen in years, and I understood how a space could change how we feel and behave. It can bring barriers down».

The properties are the result of the collaboration with architect Manuel Aires Mateus. A friend of João, the architect stepped in when the founder was working on Casas na Areia’s design. «Manuel looked into that which covered design and the concept of the house, while I undertook its comforts, interiors and materials». Embracing the potential for materiality and leaving behind an ‘excess of design’, as João defines it, led Casas na Areia to be Aires Mateus’ published project globally. Later came Cabanas no Rio, Casa no Tempo and Santa Clara, where João and his family moved in, and Casa na Terra, is now the property that belongs to Aires Mateus. The latter began as a project on a house – a ruin – that the architect worked on for one of his clients, a real estate agent who sold the property to him. It was later that João accepted to look after it as a Silent Living location. «We spoke about the project and he told me about the idea of going back to living in caves. It is about finding a place where you can hide and contemplate nature, not compete with it. People want to find a story in which they fit». At Silent Living, houses are built by using local materials in a convergence of matter and purpose and are developed though a selection of textures and surfaces. For Casa na Terra, Aires Mateus brought local wood panels to soften the coldness of the concrete; tiles in the patios are handmade in São Pedro do Corval, a village half an hour away from the house; underneath the cupola, the floor is made of local stones, which are vertically arranged. The house does not interfere with the landscape, as it is immersed in the land itself, below ground level, making it an underground cellar, a quality that reduces the need for air conditioning and heating. A narrow staircase at the top extends downwards, cutting through the earth to reveal space. On the opposite side of the staircase, one finds the cupola – a dome conveying the impression of being carved by digging into the soil – which, by framing one’s view through its concavity, opens up towards the landscape. Windows in the shape of a circle cut from the concrete walls allow light in. The walls carry the dents impressed by the wood used to raise them. Despite being modern-looking among their properties, Casa na Terra is not for everyone, João remarks. «When you close the door behind you coming from the stairs, it is as if nothing else could come from there».

During their stay in Casa na Terra, guests are invited to spend time in the house’s surroundings and the Alentejo region, a swath of land that sits between the Atlantic Ocean and Spain’s Andalucia and Extremadura. Activities include venturing outdoors, exploring historical sites during the day, such as the medieval village of Monsaraz, consuming slow-cooked meals in the evenings and kayak trips at night to gaze at the stars. Years after the project’s conception, João and the team decided to collect the thoughts of visitors, and the word that came up frequently was silence. The experiment made him realize that people wanted to be able to rest and connect with themselves. Seeing how guests perceived the experience led João to name the project Silent Living. The team’s method of communicating and reaching out to guests is how Silent Living shares its values, which the team cultivates starting from the moment their guests arrive at the premises. «If the weather changes on the day of arrival, as it tends to get cold in the evening, we tell them to bring a scarf. When we know they’re coming back from a walk, we offer them a glass of water». Making people feel at ease and treating them as friends is a principle for every element that makes its way into the project. As João recounts, the roots of Silent Living’s take on hospitality go back to his heritage. «I remember my grandparents on my mother’s side would invite a hundred people every year to their birthday parties. People they knew on the road, presidents of banks, ministers, the gardener and the fishmonger. During the First World War, my great-grandparents from my father’s family would offer people a place to stay who were passing through the village. They would feed them and service their wounds. They would prepare food and, in the evening, the employers at their factory would distribute it to the village».

Showing respect and responsibility towards the environment is inherent in the experience that each house encapsulates. It resides in the act of recovering what is present on the land. «Manuel and I struggled to achieve timelessness», João notes. That is why each project is committed to environmental awareness for the long term, and why Silent Living will further its ties to resources procured within the region in the times to come. Plans include an intervention on the farm next to Casa no Tempo, which lies in a property of 360 hectares in Montemor-o-Novo that João has been managing for the last fifteen years. It will remain what it has been: an agricultural system based upon the principles of permaculture, agroforestry, biodynamic and regenerative farming. The idea is to create a community that can appreciate the farm’s produce while contributing to its production through direct involvement. A second project – set in a location at the foot of a hill in South Africa – is underway, whose future developments were not to be shared.

Discussing the future, there is a chance for awareness towards consumption to emerge as people move away from cities. «There are two reasons for it», João observes. «The first is the rush in which we live. We imagine the future instead of living in the present. The other has to do with consumption. There are ways to spend your money. Anywhere you go, you feel tempted to consume. People need to slow down, get closer to nature». The situation will change after the experience of Covid-19, he says. «This could help, and there is pressure for it to happen», he asserts. «It depends on each of us to find our way».