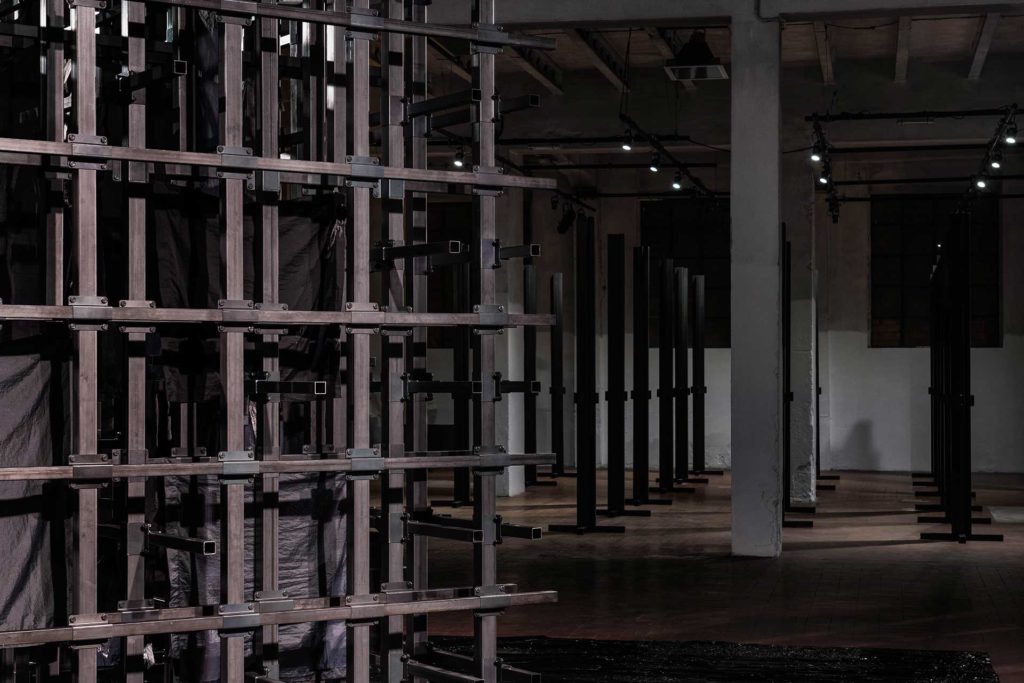 In the artistic field there is a tendency to conceptualize and define the difference and the gap between the forms of expression, looking at the other as a secondary discipline. The theory according to which sculpture, architecture, textile processing, graphics should be separate worlds with specific lines of use, is not always consistent with practice. This is the case of Domenico Romeo who describes artistic contact almost as being something innate, an approach that every artist possesses since childhood. Regarding this contact with art and the need to transform it into a path of life Romeo says, «When from a young age you begin to realize that you express yourself better by doing rather than by saying, at first you work to build up one that is your form of expression without doing it on purpose». From childhood drawing to graphic design in studies and self-taught work to develop skills and knowledge in complementary areas of creativity and art. The growth in training comes from a step-by-step path, it is impossible to have an overall view of all the disciplines at the beginning of the process, and for this reason the works of Romeo have not missed the experimentation with fabrics. The graphic expression and the more artistic part encounter each other in the works of the artist who combines them in a single process resulting in visual expression. This last resultant is responsible for the expression of the concept that is intended to be communicated. No distinction is made between the different approaches, for Romeo there is only one approach that differs in forms and is necessary to explore different dimensions of a concept. At the moment, his work is focused on sculpture, previously he developed 2D in painting and digital graphic arts. The significance is not to experiment with techniques, but to express a single concept in shapes and sizes.

Symbolism and the symbol itself result to be a recurring theme within Romeo’s works. As the subject investigates symbols in the development of the works, according to the artist the symbol goes far beyond the sign and represents the meaning that the sign carries. «At the level of the human being, the collective imagination leads to the development of symbols that then remain imprinted within individuals. I’m talking about universal symbols that exist, and every man can recognize in every part of the world», explains Romeo, regardless of cultural differences and excluding those niche symbols created in different areas of daily life such as professional fields. The artist’s need was to find, starting from painting and from his beginnings, a sort of absolute sign.

A sign that represented almost an alphabet and that was absolute in the way it brings together a series of drawings, traditions. Unique and recognizable by all, this concept is reflected in works and even in the last three-dimensional one, AXIS Anime Armate, in which are replicated archetypal signs such as the cross. The cross is a symbol that is universally recognizable and part of the imagination of humanity, far from any religious or traditional meaning that may be attributed to it. The development of his works and their evolution can be deduced from the difference between the use of graphics and drawing of the symbol and sign before, and the creation of a more complex three-dimensional system. The second approach is able to suggest the symbol and its meaning without showing it graphically. The symbol becomes something embedded in the artwork itself and for this reason it is concealed, explains Romeo, it is the negation of the symbol itself that represents it.

The encounter with the fabrics

Another element in the development of Domenico Romeo’s art is his approach to fabrics. His experience and training come from a series of professional collaborations in the fashion field such as the one with C.P. Company or with the brand Off-White, alongside Virgil Abloh, which saw Romeo’s role as head graphic designer. This encounter has revolutionized his art, dealing with the hybridization of creative processes. He explains how this allowed him to broaden his design horizons and to analyze the project and the process from a different perspective, investigating other areas such as music. The incorporation of textiles into other projects is the aspect of this experience, even though Romeo began experimenting with this material as early as his childhood and for this reason identified it as part of his artistic DNA. «The flag, as an object and as a subject, has always been present and in the current projects it returns as the antithesis of itself in these creations that I am about to present in the next exhibition», explains the artist. Over the years, the fabric has become an element of his art, with a recognition within the technical fabrics alongside the production of Majocchi, an Italian excellence specialized in the weaving of these materials. This artistic development linked to fabrics derives not only from the experience gained in fashion but also from an appreciation of historical brands that have their foundations in technical clothing.

Romeo’s new work is AXIS, on display in Milan in September 2021. He explains: «The exhibition wants the viewer to live an experience through three steps in which the darker and more human dimension is transcended, ascending towards something more sacred. This happens by meeting and colliding with black iron sculptures accompanied by flags that are not actually flags but fabrics, drapes». For this structure the fabrics were provided by the already mentioned Majocchi company. At the base of the conception and creation of this work there is the will to express personal reflections; it is an autobiographical story that also tells about the land where Romeo comes from, Calabria. The architecture is a central element and allows to express the sense of the ritual process described, which is not related or associated to a particular religion but represents an experience that transcends the human one. These new materials are being experimented by Romeo and have been in the process for about three years and were meant to be exhibited but without an actual actualization of the display. The choice of space in the artist’s conception of the work becomes the focus, the approach is site specific in order to be able to build and complete the work he needs to represent. By doing so, it is possible not to place the sculptures, but to create a path and an experience during which the visitor can get lost and then find oneself again. The search for the space, which then turned to the former soap factory in Via Boncompagni in Milan, was based on the ability of the place to convey a sense of mysticism, with high ceilings and darkness. The Milanese architecture moved away from these canons and the choice involved an industrial place that was later reshaped to make it consistent with the concept to be expressed. By living the location, the artist studied the type of experience he wanted to achieve for attendees, combining it with the message he wanted to communicate. «This is how AXIS was born, the name means nothing more than axes, because all my work is based on axes; there is an X and a Y where these black iron tubes cross each other and then fabric is hung from them. Through this modular system I have created a series of structures that make up the exhibition», explains Romeo.

Anime Armate plays, as illustrated by the artist, with an architectural concept: the armor borrows from the idea of reinforced concrete and from the grid structure that occurs within the cast where concrete is then added to create a construction. This type of structure, recalls Romeo, is the same type of construction that often occurs in Calabria, these pillars from which sprout the iron planks. This would represent an unfinished work, incomplete that for the artist does not have a negative meaning because it represents something in the making that can add another level to the construction allowing it to tend to infinity. The Anime Armate represent souls that tend to the infinite, to something superior like the souls of the Calabrians and like their architecture, continues Romeo. This is a first level of meaning, another given by the artist is that of «the Armed Soul as a soul that places itself on a level of knowledge, in the sense that it educates itself, that it informs itself, and that it becomes a living subject and an active subject in this land, not undergoing life». Romeo’s artistic research considers the works as a system in their ever-changing form and dimension. Precisely because his works are born as modular systems and the system itself is the opera, single pieces are created that take on meaning as a whole. «Every system has the possibility to be set up or dismantled and represents an infinite in becoming. It can always be replicated and it is unfinished because it is infinite», affirms Romeo.

Born and raised in Palmi, a town in the province of Reggio Calabria and currently based in Milan, the artist, graphic designer and art director Domenico Romeo is active in the fashion industry as well as in the graphic arts.