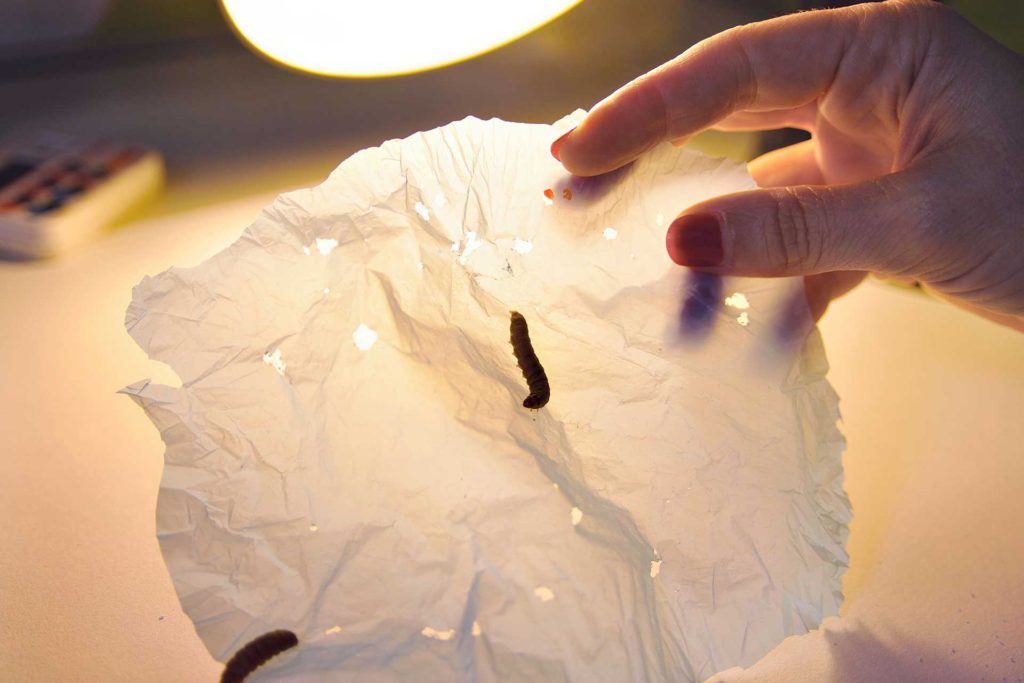 Researchers identify ‘plastivores’ organisms what if bacteria could solve the plastic pollution crisis?

Mealworms and bacteria could eat and digest plastic

In the wake of the recent discoveries on how to upcycle durable plastics, scientific studies proved – like the one presented by the Department of Ocean, Earth and Atmospheric Sciences at Chesapeake Bay Foundation – the existence of around fifty species of plastic-eating organisms that are offering a spark of hope in the fight against plastic pollution. When scientists all over the world discovered mealworms and bacteria could eat and digest plastic, they also found out that only enzymatic degradation could degrade PET into its inert monomers. Plastic encompasses dozens of different molecules, made of long chains of carbon atoms. It is made from oil and natural gasses which, when combined, contribute gigatons of carbon dioxide emissions every year. The molecules composing the plastic all resist breaking apart, and each has distinct chemical properties that must be tackled differently. Even though humans have come a long way regarding the recycling methods, huge amounts of energy and water are used every day in the processes and even if everyone could hypothetically stop creating new plastics today, Earth would still be left with tons and tons of non-biodegradable waste.

While a part of the problem is being dealt by reducing plastic waste and limiting its spreading, there’s the need for a solution that could eliminate the waste that’s already stranded on the landfill, using limited or close to zero energy. Up to this day, researchers have discovered that while some species of microorganisms – mostly bacteria and fungi – can turn plastics into energy, others can thrive on eating polyethylene, the primary plastic in single-use bags. Caterpillar larvae of the greater wax moth for example, together with the microbiome in its gut, can break down and metabolize plastic. During a close observation, researchers have been able to study that this particular species of bacteria could survive on eating nothing but plastic for a year, and that work included a very close working relationship between the caterpillar and its gut microbes, whose symbiosis rapidly accelerates the plastic biodegradation. The caterpillars that eat plastic also have higher amounts of gut microbes, allowing them to eat more of it over time. Bacteria Ideonella sakaiensis, on the other hand, was studied for its ability to eat PET, from which bottles are commonly made. If these enzymes were tested in a real environment, for it to be useful, it has to work fast, be marketable, safe, and deployed where plastic pollution is most abundant. Even though bacteria wouldn’t eat fast enough to mitigate the mountains of plastic that enter the environment every year, this and a series of other breakthroughs mean it could one day be possible to build industrial-scale facilities where enzymes and microorganisms chomp on piles of plastic, where they are sprayed on so they can prosper and reproduce.

The enzyme that allows bacterias to digest plastic

Not only worms are able to consume various forms of plastic, they can eat polystyrene containing a common toxic chemical additive and still be safely used as a protein-rich feedstock for other animals. Polystyrene is a type of plastic used for packaging and insulation that is costly to recycle because of its low density and bulkiness. One of the main ingredients of polystyrene is hexabromocyclododecane, or HBCD, which is used for improving plastics’ manufacturing properties or decreasing flammability. Said substance can have impacts on human health, so while the European Union plans to ban it, the U.S. Environmental Protection Agency is evaluating its risk. In a recent experiment conducted by the Stanford University, mealworms who ate polystyrene excreted half of the amount they consumed as a degraded fragment and also carbon dioxide that contained HBCD, meaning that their guts played a role at maintaining a healthy organism, even though at the same time, the additive was released into the environment again. The enzyme that allows the bacteria to fully digest plastic, attack the hard, crystalline surface of plastic enabling the complete recycling of the bottles and, if mixed with cotton or other mixed-fabric clothes, would allow them to be recycled. Following the first discovery of plastic-eating bacteria, scientists around the world began developing lab-grown microorganisms and enzymes to find out more about how they work to make them faster and more efficient. In 2018, British researchers created a mutant version that broke down plastic twenty percent quicker than the naturally occurring bacteria, and it was also effective on harder plastics, increasing the number of potential applications. One of the first concerns about the further developments was to create bacteria that could break down different substances as well, making them work on multiple type of plastics and other materials that aren’t easy to decompose, like polyester and cotton. The idea around it was to make built-in ‘bacteria-package’ for clothing that could break down their separate components, allowing the garments to be recyclable and reusable once again.

The downsides of using bacteria for plastic recycling

The concept of bacteria and worms that eat plastic is appealing to those who work in the scientific field and are struggling to find a solution to the environmental crisis we are enduring nowadays, as it would be cheaper in terms of energy and water consumption. Major plastic-using companies are already collaborating with researchers to gain information about plastic-eating bacteria and it is not to be excluded that, in the future, it would be possible that these enzymes will play a part in plastic recycling. Although very promising, this process has already pointed out its problems in several publications, where potential issues and divergences in large scale usages are presented. Toxins are released for example as plastic is ate by bacteria: this could do harm to the environment more than the plastic waste itself, and since those bacteria are entirely lab-created, they are untested in real environments, so their adaptive responses are unknown. Secondly, the decomposed plastic monomers need to be separated from the other substances in the mix for them to be recoverable. This adds to the time and cost involved in breaking down the products that we produce, making the process less viable in the long run. It is estimated that it could be ten years before the bacteria are ready to consume plastic at a large scale. The speed rate of these enzymes is also a key factor: if they aren’t able to degrade hard plastic fast enough, they’re useless in the recycling process, as PET is manufactured in varying levels of crystallization; the more crystallized the plastic, the harder it is to break down. While further research is made, it’s important that plastic consumption is reduced to minimum, and the waste is properly disposed of and recycled, in order to minimize the amount dispersed in landfill and our oceans.

A non-profit organization founded in 1967, the largest dedicated to the preservation of Chesapeake Bay, in Maryland, United States. CBF is committed to find science-based solutions to the plastic pollution that it’s degrading the oceans, engaging in education, advocacy and litigation about effective ways to clean the waters from plastic waste, toxic contaminants and raise the environment health level.