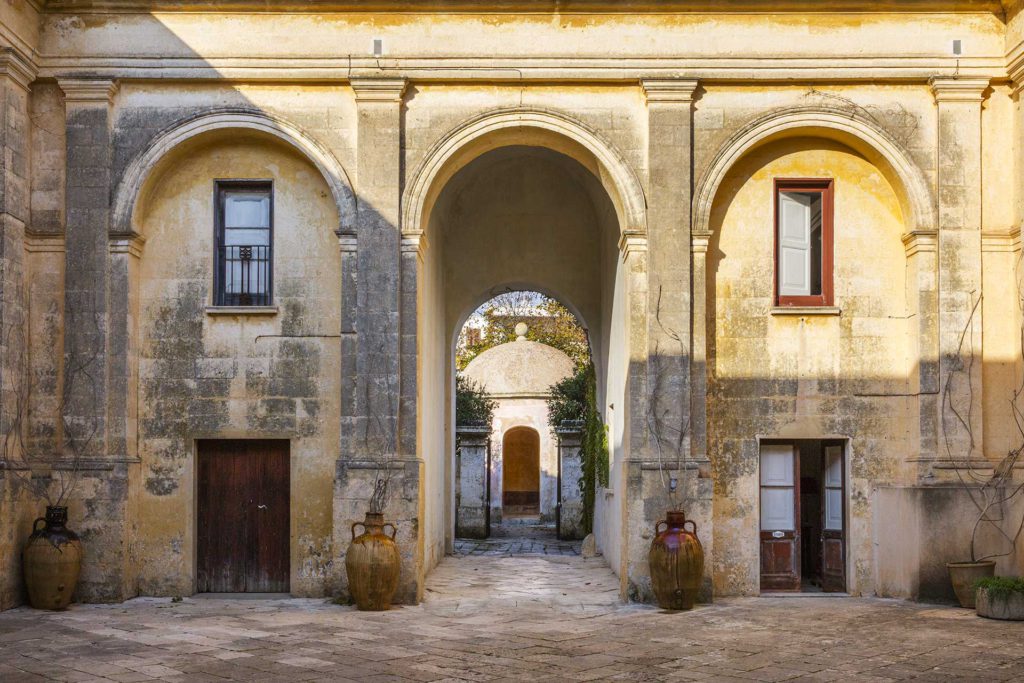 Palazzo Daniele, Gagliano del Capo. Breaking from the territory, while respecting its heritage and tradition

Places that were thought and designed as private mansions are transformed into public structures by Gabriele Salini, founder of GS Collection

Gagliano del Capo is a town in the region of Apulia, Italy. It is a place of farmers, simple in the architecture of its buildings. The landscape of the Salento area contrasts with the majesty and harmony of Palazzo Daniele, a structure conceived and developed during two historical moments. The building of the palace – designed in 1857, during the Kingdom of the Two Sicilies – took place in 1861, the year of the proclamation of the Kingdom of Italy. Domenico Malinconico was the architect who signed the project, commissioned by the Daniele family, who lived there for four generations, the last member being Francesco Petrucci.

The friendship between Francesco and Gabriele Salini, founder of GS Collection – a portfolio of locations in Italy, which the entrepreneur defines as «a family» – led to the renovation of the place by Ludovica and Roberto Palomba. «Every time one enters Palazzo Daniele, it feels like being in another dimension». Salini describes the structure as a place breaking from the territory, while respecting its heritage and tradition. The vision followed by his team while transforming the structure was «to restore the authenticity of the place, removing all the unnecessary». This is the reason behind the choice of getting rid of the elements belonging to the twenties, during which the first renovation took place.

The palace was supposed to feature two floors. During construction works, aquifers were found. To this day, the building benefits from this hiccup. Therefore, one floor and an internal courtyard characterize it. After the first space, guests find an orange tree. In the past, tuff walls hid it. These were lowered during the renovation. The aim of construction works was to make the garden more accessible. Nowadays, the internal part communicates with the external one. Through the salons, clients find themselves in the kitchen, which has become the heart of the palace.

«A break from the surrounding environment. But a strong integration of the territory». Salini’s aim is to enhance the authenticity of the experience provided by the structure. While staying at Palazzo Daniele, one can remark the desire to connect with the Apulian tradition, while keeping an eye on modernity and innovation. Heritage and minimalism are the elements characterizing the design of the building. Frescoes, vaults and floors in the taste of Barocco Leccese mix with beds without headboards and white linen sheets.

The majority of the staff is from Apulia. Chef Donata, as an example, moved to her homeland from Milan. Now, she cooks handmade orecchiette for the hotel’s guests. Local craftsmen create the ceramics and Tessitura Calabrese provides the fabrics. The palace also features artworks developed by Apulian artists hosted by Petrucci at Palazzo Daniele for his Capo d’Arte project in collaboration with Galleria Bonomo in Bari.

Salini wants his structures to be plastic-free, for what concerns the products used by both clients and staff. Further, the use of refillable containers limits waste. The nature of Palazzo Daniele – nine suites – influences its impact on the environment. The size of the building is an element that marks the owner’s vision. Salini, in fact, aims at developing a collection of hotels characterized by a maximum of twenty rooms.

His idea of tourism is related to the concept of journey as a personal experience, an occasion to meet people. A moment experienced through places that have a connection to the territory, providing the possibility to make the traveler feel at home while developing an exchange with others.

Salini describes Palazzo Daniele’s service as «informal». Employees wear white linen shirts to underline the genuineness of the hospitality concept, also linked to the experience of the Daniele family. The palace has always been inhabited. During the entrepreneur’s first visits to Gagliano del Capo, Petrucci lived in one wing of the building. His aunt in the other, before leaving everything to him. From that moment, the idea of merging and restructuring Palazzo Daniele, transforming it into a hospitality project, was born.

«I believe that following one’s passions is always the right choice». Gabriele Salini belongs to the seventh generation of a Roman family. He is passionate about hospitality and art, interests influenced by his own family. Growing up as a Salini, in fact, he used to meet his relatives – minimum forty to fifty members – for parties and celebrations in Castel Gandolfo. The spirit of conviviality and warmth was always felt.

The possibility to combine both passions was provided by the transformation of his former house at Piazza di Pasquino 69 in the center of Rome – a building bought by the Salini family in the eighties, where he lived for more than ten years – into a hospitality project, titled G-Rough. Salini’s motto «this house is not a hotel» describes the entrepreneur’s vision. Places thought and designed as private mansions become public structures.

Both G-Rough and Palazzo Daniele underwent a conservative renovation, which respected the experience of their inhabitants. Salini works as a patron through site-specific interventions. He collaborates with artists in order to design and decorate his mansions. At Palazzo Daniele, for example, artist Andrea Sala developed a shower tray containing the water falling down from a six-meters-ceiling.

The entrepreneur describes himself as a «contemporary nostalgic», and he wants to provide travelers like him with more locations where they can feel at home, starting from Italy, which he defines as «a primary destination for future tourism». Naples, Palermo and Sicily represent places linked to his experience, where he would like to extend the collection. His aim is to host repeaters having longer stays, as if they were considering his locations their holiday homes. As in all houses, Salini plans to enhance Palazzo Daniele year by year, adding elements, like rooms and common areas. He would like to implement a catering space or a yoga studio in the section of the palace where the renovation has yet to take place.

His next project is Casa Caracalla, set to open in 2022. Another location designed to be a private mansion, which he has now transformed into a members-club hotel in the center of Rome, in the area in which the city was founded and where the Appia Antica begins. The Salini family bought the property in the fifties, transforming it into offices. The owner describes it as a «urban escape», due to its six-thousand-square-meter garden. Architect Marcello Canino designed the villa in the thirties.

Palazzo Daniele is an aristocratic palazzo and artist guest house located in Gagliano del Capo, a town in the Salento area of the Apulian region.