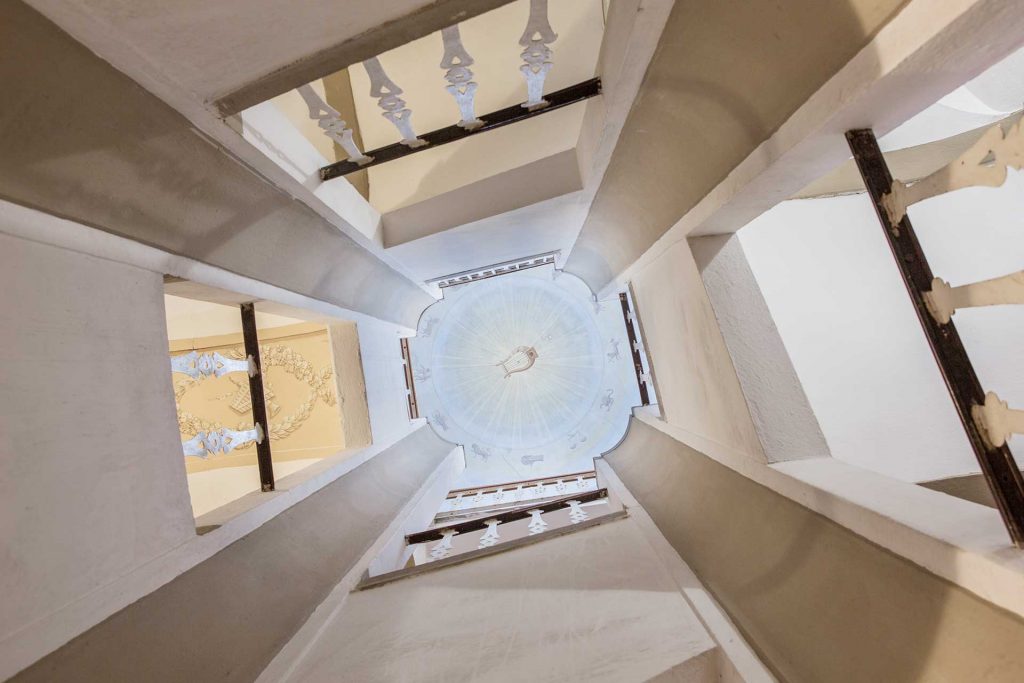 Umamma welcomed guests in 2019, after an eight-year renovation. The works were executed by the accountant-turned-advertising director, Giovanni Settesoldi. Located in the village of San Miniato, Tuscany, this project set out to preserve the integrity of culture and honor the building’s heritage offering visitors an environment to experience the unexpected. San Miniato is in the center of Tuscany, surrounded by Florence, Pisa, and Siena. Referring to the location, Settesoldi says, «I grew up in Tuscany. There are villas whose interiors resemble each other. I wanted to bring a piece of France, a piece of the U.S. – and melt them with the roots of Tuscany». Giovanni Settesoldi worked in advertising agencies Ogilvy & Mather and J. Walter Thompson, moving between Paris, Los Angeles, New York, and Dubai. This mentality would play a part in Umamma’s renovation. Reflecting on his homeland, Giovanni Settesoldi says, «You visit places that you have idolized, to discover that the ‘American Dream’ is not the dream that you had when you were a kid and you come home to appreciate your homeland». This realization was a catalyst for Settesoldi’s plans to renovate the Tuscan property.

Located in a Sixteenth century palace protected by the Fine Arts, it is situated along Via Francigena, an ancient pilgrim route that ties Canterbury to Rome. From its windows, you can see the birthplace of Leonardo da Vinci. «The property is 500 or 600 years old; I bought this space online when I was in Paris from a website that sold second-hand items – clothes, cars, bikes. It was listed for €160,000. I liked the space, but I was not convinced because there were no windows. It was a risk, but I decided to buy it without permission. As soon as I entered, my first word was ‘Umamma’ which is a Tuscan word that is said when you are astonished by something. That was the starting point. The restoration began in 2011 and finished in 2019». With no educational background in architecture or design, the property was a barn for livestock, and during the Twentieth century, a nightclub and brothel. Today, the renovation consists of two stories. The first floor hosts the living spaces: the dining area, kitchen, bedroom, and bathroom. Its layout features windows overlooking the Tuscan hills. The lower-level houses a subterranean pool and rainfall shower. In terms of the restoration, «there was no brick exposed. I decided to make a hole in the wall to discover what was behind it, and that brick was the feature that represented Tuscany».

Settesoldi partnered with Gabriele Evangelisti, architect at dECOi Architects. «I wanted to be the architect [of Umamma], but did not have the competence». Evangelisti shares a view of culture and design, having worked in Italy, France, and the U.S. To create this space, Settesoldi recruited specialists. «I was trying to solve problems. One of them was how we were going to proceed from the top floor down to the cave, using a trapdoor. I called a theatrical artist – who was dealing with this regularly. He brought his experience of the theatre curtain, using string machines and movement to lift the trapdoor. I had to ask another person who was a mechanic to merge his experience with the theatrical artist to build a machine to lift the trapdoor. When I built the pool in the cave, the steam from the heated water was rising through the stairway and coming into the living space. It was causing the windows to condense. Outside was winter, inside was warm. It was humid. I called a man who was working with ice cream refrigerators, recalling that the window display of ice cream refrigerators faced this issue. I discovered that they use a heated cable to warm the glass; I asked him to reframe the glass with this cable that would then release heat on the surface».

Sourcing resources and materials from San Miniato, Settesoldi says, «I tried to work with people that belonged to the village. In terms of the interior, I designed the marble table and approached an artisan to construct it. For furniture, I followed a rule: source second-hand. I spent time researching these pieces». Solar panels were not feasible for Umamma given the historical location of the property and laws that vie to maintain the aesthetic consistency of the village surroundings. «There are four elements that make you comfortable in a house: a sofa, a bed, a table and a chair». The space implements design elements that seek to challenge convention in a bid to surprise its guests. Upon entering this property, you move downstairs to upstairs. The trapdoor is an example of one of Settesoldi’s ‘Umamma’ moments; the pool is another. «It is not common to find a pool in a cave because people who want a pool, seek a pool outside. Here we did not have the space». The pool was awarded the ‘Best Italian Indoor Pool’ in 2019 by Piscine OGGI. Materials that bring people back to nature were selected when creating the lower-level of Umamma. «The stone used for the pool is ‘Calcarea’ which can be found in Tuscany and the south of Italy».

Handmade ponchos with Umamma insignia are on-site for guests to use. Settesoldi hand-selects recycled fabrics for these – wool for winter, cotton for summer – and stitches them in San Miniato by an artisan tailor. Visitors can avail of Umamma wine that is harvested from Tuscan grapes and soon, Umamma gin. Electric bikes are available free of charge. An on-site private chef hire, yoga classes, horse-riding, wine tasting and blues music performances can be availed at the property. «Preserving the culture and tradition of every region or every village allows future generations to grasp that which can be forgotten». To Settesoldi, «In Tuscany, we have a connection with people. When I was in New York, life was distant and crowded. When living in a village: you know every person, and you can have discussions; you can talk with older people. It was not like that in New York».

Since its inception, San Miniato’s Umamma has been used for accommodation. Activities that connect people, including concerts, performances, and dinners that have taken place on the property. Giovanni Settesoldi plans to expand the Umamma brand with added locations in regions of Italy. «I am buying another space in a close-by village which was a dancing club in the 1940’s. I am in the process of negotiating to have a speaker system installed around this village to play the sounds of the 1940’s, for one hour per day, for the opening in 2021».