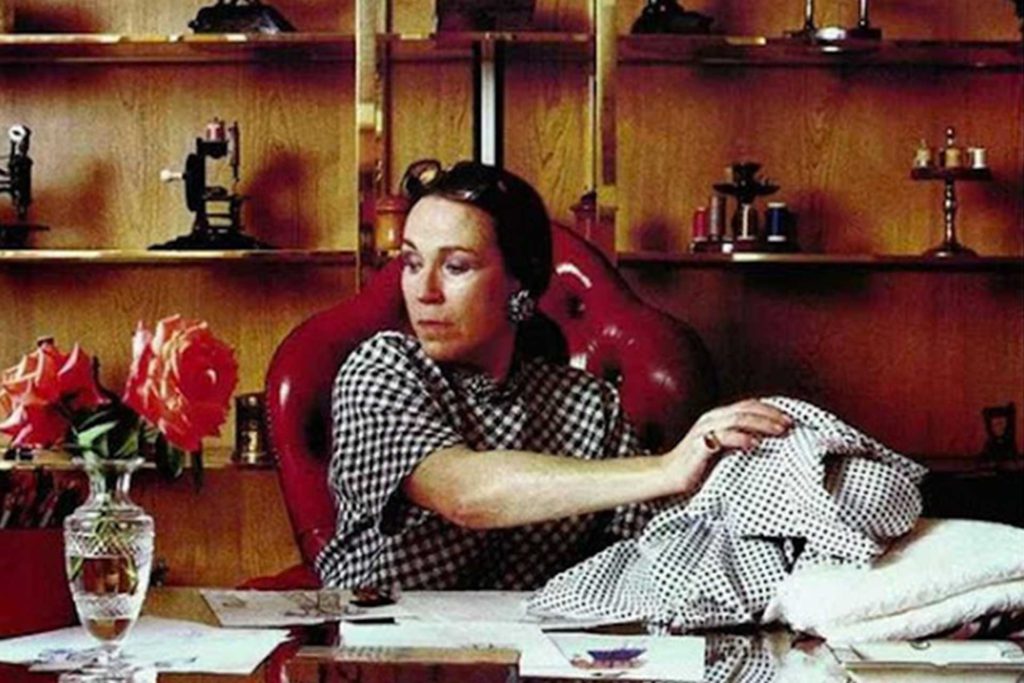 Celine brand evolution: an analysis of a brand that has served as a blank canvas for the personalities of its creative directors, from Céline Vipiana to Hedi Slimane

Before Hedi Slimane removed the accent above the ‘e’, stirring the fashion pot and inadvertently launching a cult-like #OldCéline movement, the brand’s logo had gone through various incarnations. It all started at the tail end of the Second World War, when Céline Vipiana and her husband Richard opened their shop at 52 rue de Malte in Paris. The boutique, which went by the name of Celine, le bottier pour enfants sold luxury footwear for children branded with a red elephant created by French cartoonist Raymond Peynet. The Vipianas gained esteem for the shoes’ quality and custom-made soles. In 1966 they established a leather goods factory in Florence to expand the range to shoes and accessories for women and in 1967 they launched a prêt-a-porter line with a focus on the functional that became core to the brand’s DNA. As the foundress herself stated to Interview magazine, the Céline fashion was «comfortable and practical. The woman who travels can bring two light things in a suitcase and these things will keep being clean and flawless». True to the spirit of the decade, Céline’s ready-to-wear line was designed to fit an active woman’s lifestyle and included sporty-chic pieces like flat-heeled moccasins — the Inca and the Byblos. The practical-but-elegant collection proved to be a winner and Céline became the first luxury brand to hit the Japanese market, shortly afterwards triumphing in the USA.

From Céline Vipiana to Michael Kors

Though commercially successful with eighty-seven international boutiques, the brand kept a relatively low profile before catching the eye of Bernard Arnault, CEO of LVMH, in 1987. Nine years later, Céline got officially integrated into the luxury group and pushed into the spotlight with a boutique at avenue Montaigne in Paris. It wasn’t until 1997 that a new chapter began — Céline Vipiana, in charge of her brand’s designs for fifty-two years, passed away and was succeeded by Michael Kors. This put the brand in direct rivalry with Louis Vuitton and Loewe, both of which hired new American creative directors at the same time (Marc Jacobs and Narciso Rodriquez, respectively). Before Kors came along, it was the leather goods that were the brand’s signature. With his take on luxurious sportswear, the designer plucked Céline’s ready-to-wear from obscurity. For fall, there were cashmere knits, furs and separates. For spring, the garments had a feel of jet setting destinations like Monte Carlo and Tahiti. Despite his namesake brand’s aesthetic occasionally shining through, Kors kept consistent with Céline’s philosophy of plain designs for sophisticated women. Some elements he put his own spin on, like the Blazon Chaine insygnia. Featuring intertwining ‘C’s inspired by the chain-link fence around Arc de Triomphe, they were created in 1973 by Vipiana to briefly serve as the logo; Kors played around with the design, «turning it into sandals, threading it round the waist of jeans, modernizing it as buckles», as told in a 2000 interview with Tim Blanks. Kors doubled the brand’s turnover with two bags, Poulbot and Boogie, but felt neglected by the parent company and exited in 2004 to focus on his own label. He left Céline as he found it: a traditional French lifestyle brand with a high-end reputation. His final collection, which merged sharp mid-nineties American sportswear with mid-fifties European classic garments, wrapped up his Céline legacy with a bow.

The next four years were a black hole in the brand’s history, which withered without a singular creative vision. The buzz generated by Kors had died down; new designers swapped seats as though playing a game of musical chairs — Roberto Menichetti lasted only a year, his successor Ivana Omazic two. When Phoebe Philo, who in the early aughts turned Chloé’s fate, eventually took over, she proved to be the right woman for the job and catapulted Céline into the forefront of fashion. Her debut collection for spring 2010 was met with critical acclaim and approval from consumers, who quickly formed a fanbase nicknamed Philophiles. While Philo’s style was in line with Vipiana’s original vision, it turned out to be more coincidental compatibility than conscious effort. «When I came to the house, I had an idea of what I thought the core values of Céline should be. Céline had no recognizable silhouette, no historic designers, it hadn’t been licensed out in the Seventies and Eighties as many other brands had. I’ve never looked into archives anywhere I’ve worked, actually, like it or hate it, it doesn’t matter, I just like it to be strong.It’s worth doing something differently». Of the brand’s identity, she was quoted by The New York Times saying: «It will be whatever I make it, for the time I’m there». A move to be repeated by Hedi Slimane a decade later, but differently received, Philo’s rethinking the label in her own image catered to a female gaze and in the process made it a favorite of the fashion’s in-crowd.

Hailed as «a designer who knows what women want», she redefined womenswear of the 2010s with her oversized dresses and utilitarian layers, stressing comfort and elegance over sex appeal. Best evidenced in her rejection of the pretty shoe, she sent models down the runway in fur-lined sliders, glove shoes and block heels; she herself took a final bow at the end of each show wearing the Adidas Stan Smith sneakers, single-handedly sparking their revival. While part of her fanbase’s fervent loyalty can be accredited to pragmatic designs that felt universally flattering for women everywhere, it was her entire ethos of subverting fashion’s commodification of women’s bodies. Her first ad campaign did not feature the heads of models to keep the focus on the apparel; for the spring 2015 campaign she cast writer Joan Didion, then seventy-nine, as the face. Philo’s departure in 2018 was met with a frenzy of Philophiles rushing into boutiques to stock up on their favorites. With a fanbase this ardent, the brand’s successor Slimane was facing an uphill task.

Like Philo, he desired to mark his tenure as his own: «We don’t enter a fashion house to imitate our predecessor, much less to take over the essence of their work, their codes and elements of language», Slimane commented to Le Figaro. «The goal is not to go the opposite way of their work either. It would be a misinterpretation. Respect means preserving the integrity of each individual, recognizing the things that belong to another person with honesty and discernment. It also means starting a new chapter. We arrive then with our own stories, our own culture, a personal semantic that is different from the ones of houses in which we create». Still, his rebrand was met with largely negative reactions, mostly criticizing his trademark super skinny rock’n’roll styles that fit at Saint Laurent as missing Celine’s values entirely. His decision to modify the brand’s logo caused an uproar as if deleting the brand’s legacy — a not entirely fair assessment, considering Slimane’s logo was paying homage to the one from the 1960s. His debut collection for spring 2019 was a firm marking of territory: he wiped the brand’s social media accounts clean, added a menswear line for the first time in brand’s history, and sent waifishly thin models down the catwalk wearing his signature slick tailoring and glittery babydoll dresses, dripping in hardware and leather. Yet his sophomore collection seemed like a 180 degree turn; for fall 2019, Slimane unveiled the new Celine woman — or perhaps not at all new, considering she appeared to be pulled straight from the brand’s 1970’s archives, a bourgeois Parisienne from the Left Bank. Next season’s men- and womenswear collections, which came out after the start of the pandemic, took another pivot, this time into Gen Z. Everything about them was literal, from the viral TikTok songs serving as soundtrack to athleisure outfits that seemed to be curated by Emma Chamberlain. His collection only becomes clear in hindsight, with the release of fall 2021 campaigns, when the larger picture reveals itself. The concept for each season has been a complete product; a concept fixated less on the garment’s fabric and architecture, as was Philo’s case, and more on the message. Slimane’s hyperfocus on the storytelling through his collections is so intense that his designs might be misconstrued as derivative. What they are, however, are snapshots of his current obsessions, executed in detail from the setting, casting and music to the garment itself — whether the subject is pre-pandemic Parisian nightlife, old-old Celine or TikTok teens, Slimane will create his Celine costume for it. It is far from Philo’s approach, but neither in a good or bad way, simply another hierarchy of artistic values.

In 1945, Céline Viapiana and her husband, Richard, created Céline, a made-to-measure children’s shoe business, and opened a first boutique at 52 rue Malte in Paris. In 1960, the brand decided to change its positioning by focusing its business on a ready-to-wear fashion brand for women with a sportswear approach. In 1987, Bernard Arnault decided to buy into Céline’s capital, integrating it into the LVMH group in 1996. Vipiana remained the designer from 1945-1997: American fashion designer Michael Kors was named women’s ready-to-wear designer and creative director for Céline, a role he kept until 2004 when he left to focus on his brand. Philo’s tenure at Céline began in October 2008, and she presented her first ready-to-wear collection for Spring/Summer 2010 at Paris Fashion Week. ​​In December 2017, Philo announced her departure from Céline after finishing the Fall 2018 collection, which was presented in March of that same year. On January 21, 2018, LVMH announced the appointment of Hedi Slimane as Artistic, Creative and Image Director and in September 2018, he presented an updated Celine logo on the brand’s Instagram account, prompting the rise of the #OldCéline movement.