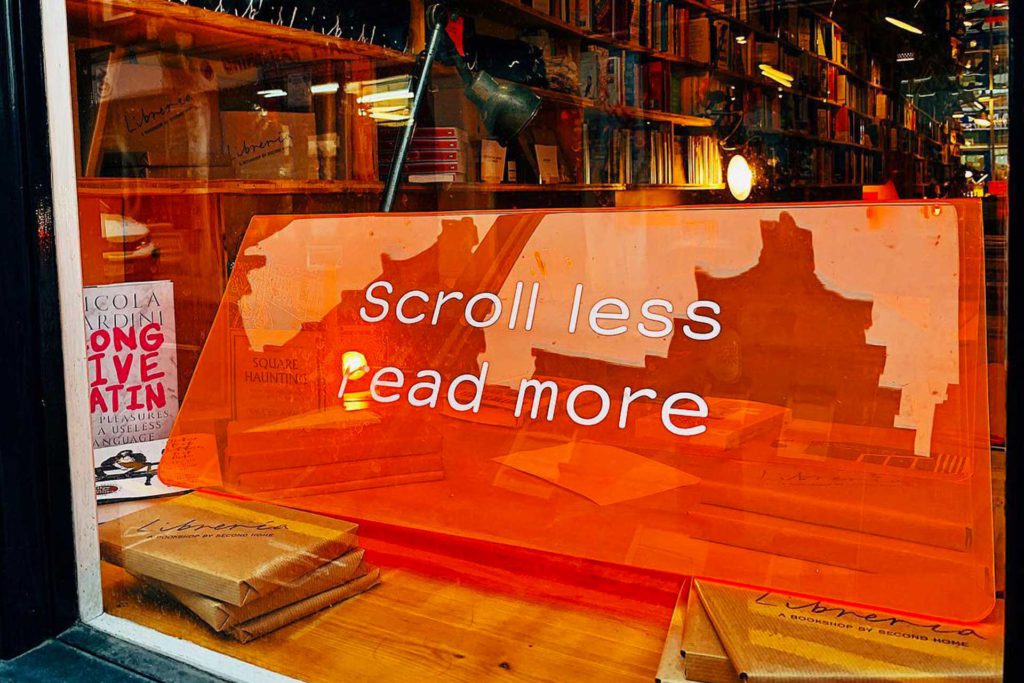 Libreria, London. A bookshop by Second Home, a labyrinth of books

In eight-hundred-and-thirty square meters space, with more than six thousand titles, visitors have to find their way. The logic is antithetic to the algorithmic mechanism

Chaos has its rules in Hanbury Street 65, in London. Stepping in, the classic frontage and white lettering of the door will leave space to a labyrinth of books. Libreria is the creation of Rohan Silva, a former Downing Street policymaker and founder of Second Home. A group of cultural venues, designed to support creativity, innovation as well as entrepreneurship, together with his business partner Sam Aldenton. The intention is to create a refuge from digital world and encourage interdisciplinary thinking.

«We curate our books to maximise serendipity», they say. Opened in February 2016, Libreria, in fact, rethinks the book experience, trying to make people discover new books and ideas. Shelves are stocked and arranged not according to standard categories, but to broad themes like, Wanderlust, Enchantment for Disenchanted and The City. Each of these areas feature different genres. In this way, readers can encounter titles they might have not come across otherwise. Wanderlust, for example, features books by authors ranging from Robert Macfarlane to Marco Polo.

In eight-hundred-and-thirty square meters space, with more than six thousand titles, visitors have to find their way. The logic, therefore, is antithetic to the algorithmic mechanism. There are no recommendations, in fact, but only freedom to discover. One could experience the feeling of getting lost even though everything is precisely stored. According to the founders, this process would allow people to make unexpected connections.

In other words, it is a concrete celebration of the analogue. Technology is, therefore, forbidden. No smartphones or other devices are allowed. No wi-fi is available. To solve the contemporary problem of an overload of information, this place is an exploration where one can lose himself/herself in stories without being distracted by the internet. And, in particular, not to be reached by a targeted product. In a way, the idea is reversing the digital process.

That’s why bookshops that exclude technology have to become destinations to keep up the competition with the online world. In order to reach this aim, bookstores have to meet design requirements. Indeed, Libreria is above all a design-led bookshop. In 2016, Silva employed José Selgas and Lucía Cano, the architects behind the colourful Serpentine Gallery Pavilion (London, 2015), to create it. Selgas and Cano used the 1941 short story by the Argentinian master of mystification Jorge Luis Borges, The Library of Babel, as the main inspiration for their design. The idea of an infinite library-universe in which hexagonal galleries contain all the books ever written and all of those to be written characterizes the tale.

Floor to ceiling shelves, handcrafted by these two artists from the Slade School of Fine Art, wind around the walls and emanate an orange colour. Selgas and Cano recreate the sense of a magical labyrinth by using irregular lines and reflective surfaces. The bookshop has indeed a ceiling covered by an unusual black reflective material, called barrisol, along with a mirror at the very end, that gives people the illusion of extra space. So, booklovers will have the impression of being lost, but, above all, they would perceive a boundless feeling. In the design-thinking process, a key element has been the space to read. Cushions fill large grooves cut into the walls, inviting customers to sit down and read and escape from the outside – and online – world.

Libreria also hosts other spaces. In the basement there is, in fact, a printing press that really brings books to life.  Clients can sign up for courses and print their own work. But the exploration – and the related experience – does not finish with books. Further, the shop has a bar – free to sup for customers because the venue does not have a licence. But, above this, there is a cultural program with lots of events taking place every month. Not only reading, but live music and workshops are often on the schedule.

If you want to organize a themed literary evening, a screening or a book launch, Libreria is also available for private hire. The owners encourage real human contact. But if you cannot renounce to the online experience, the bookshop offers you a solution. Customers can purchase limited-edition books, signed copies and other products online. Here again Libreria is peculiar compared to other bookshops, as the online items constantly change.

If you’re not familiar with the area, the bookshop is at the heart of East London half way from Whitechapel and Shoreditich. This district, stretching out from the City’s edge to River Lea, is the hipster, multicultural and vibrant soul of London. It’s a hybrid cross-road with a mix of identities and styles, where artists, designers as well as youngsters feel at home. Full of pubs, restaurants and speciality shops, diversity is therefore the pattern of East End.

The main highlights include the large cluster of Sunday markets – Bricklane is just few steps away from Libreria – and the nightlife area – from Old Street station to Kingsland Road in the London Borough of Hackney. Coming from Liverpool Street station, you also have to the chance to cross Spitalfields. A huge nineteenth-century market building, to reach the bookshop.