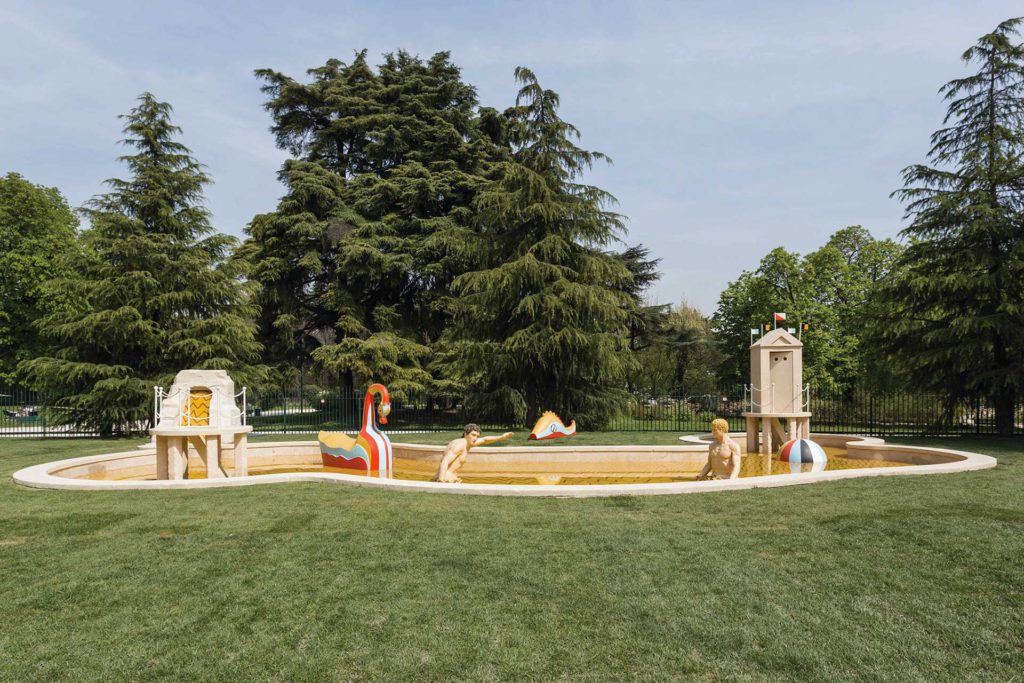 Radio Raheem – It is easy to make a radio, it is hard to make a good one

Discovering a Milan-based web radio, born in 2017 from the minds of music and culture professionals to connect people and ideas

Born in 2017 from the minds of music, art and culture professionals, Radio Raheem is a Milan-based web radio located now in the Museum of Design Triennale. Its variety and richness in show schedules suggests that it is more than a conventional web radio. It is a physical space, initially hosted by the window of a bar in the Navigli neighborhood, the RAL, but it is also a people’s connector and a tank of ideas, opening a wide perspective on the worldwide. With an international attitude, Radio Raheem is a unique reality in the Italian media scene. According to its founders Marco Aimo and Diego Montinaro, «the idea came from the observation of the Italian media panorama, where there was a lack of radio broadcasters or digital platforms that could be more contemporary».

Aimo says that «the project seemed an utopia at the beginning, but it quickly turned into something more concrete and into a real activity, thanks to the creation of a team made up of people who already had a long professional experience in the music, culture and show business. Not only Diego and me, but also Giacomo Colombo, for example, who takes care of the administrative part, or Michele Rho, who is a director and video-maker and he has been working in the field of movies, advertising and television for many years». At the moment, the staff of Radio Raheem includes also Camilla Colibazzi, radio manager, and Michelle Davis, coordinator of the weekly newsletter, Galaxy Express. While music is the core business of the radio, it is not the only topic. As Aimo affirms: «The radio started with a musical soul, music is a glue, it is like a main river from which a thousand small rivers start». In four years, Radio Raheem has grown and developed quickly. Aimo remembers: «Starting from the RAL window, it reached the Triennale Museum and it found an institutional headquarters. The Triennale recognized and appreciated the value of it».

Even if the new headquarter offers an international perspective, since its beginning Radio Raheem had a wide horizon, going on a double track, both local and global. According to Aimo, «the positioning within the European, extra-European and Mediterranean landscape was one of our first targets and we want to do it more and more». Montinaro continues: «In a short time, about a year and a half, we managed to attract a good international attention. The winning formula is the diversified origin and the variety of contents, in fact we offer not only music programs but many different cultural contents. So, we have taken that slice of public that looks for high quality contents».

It is easy to create a radio from the technological side, especially a web radio, but the real challenge is to maintain a high level of contents, building a quality show schedule. From this point of view, the period of the pandemic has opened a reflection on the meaning and the mission of the radio. Aimo recalls: «Everyone started doing podcasts, so we had to think about the need of a radio like ours, which is a hybrid between a community radio, a digital platform, a media, an event production agency and more. Everyone is on Twitch, creating contents, but Radio Raheem is a safe place for many different niches and bubbles of audience. It can be representative. We started from scratch but we were prompted by the enthusiastic and fast response of those people who have followed us». So, what has the pandemic brought about? «The pandemic has been a moment of change, that has allowed us to create new international connections and that has raised expectations for contents. It has been a boost for Radio Raheem».

The balance between experience and enthusiasm

In Radio Raheem’s schedule there are many shows and hosts, there is a big variety of genres and formats, but it is easy to understand that there is a coherent editorial line, even if apparently heterogeneous like a patchwork. Diego Montinaro, who is the artistic director, tries to explain his criterion of choice: «It is hard to explain, but I try to understand if the people who propose themselves to us, or to whom we propose to collaborate, have something to say, an original perspective of sound and approach, a sort of freshness, a different gaze to the world. The technical aspect is not essential: there are some djs and hosts who are professionals used to mixing records and others who have never done it and do not have this kind of ambition».

Montinaro’s guideline is clear, for example, through JazzHunters, the show dedicated to jazz hosted by Giulio Pecci and Vittorio Gervasi aka Coltreno, an engaging musical journey through the various forms of contemporary jazz, among the most disparate influences of hip-hop, afrobeat and electronic, without geographical borders. As Montinaro says, «maybe some sacred monsters of Italian jazz would have been entitled to make this kind of show, but Pecci and Gervasi, who is also a great saxophonist, have an original attitude and a unique freshness, due to their age and their background. So, I have been happy to trust them, just to name a couple of residents». Aimo confirms that «to create a balanced show schedule requires a complex formula which includes also intergenerational levels: some hosts have experience and reputation; others are young and fresh. We managed to mix things up by favoring high quality contents and taking risks, because we have also trusted people who had no experience but who had enthusiasm and the right approach».

Who listens to Radio Raheem?

Inclusion, diversity and representativeness are focal issues today, so the radio schedule has to be influenced by them. This is the political commitment of Radio Raheem, which manifests itself without ideological declarations, but through simple facts and concrete actions, for example the multicultural attitude of some shows and of some hosts. Like Ehua, an Italian dj and producer, based in London, who has been part of the Radio Raheem family for a long time: in every episode of her show, she goes through the many nuances of the global electronic sound, from gqom to kuduro until the new frontiers of experimental techno, with her international guests.

This variety of proposals is supposed to be inclusive and to bring a wide audience, but, however broad, Radio Raheem’s audience still represents a niche. The team made a survey among its listeners few weeks ago to understand who they are and what they want: the prevailing range of listeners is twenty-five to thirty-five years old, living mostly in the big cities, especially Milan, then Rome, Turin, Bologna and Naples, but the results are good throughout Italy and in some European capitals such as London and Berlin. As Montinaro highlights, «in the last twelve months, counting audio and video listenings and re-playings (direct and on demand), we have exceeded one and a half million plays».

One of the most popular programs is that hosted by Giorgio Valletta, dj, radio speaker and music journalist, also co-founder of the nightclub called Xplosiva and of the Club To Club festival. His show on Radio Raheem combines groove with a classic radio conduction, presenting news, previews, re-edits and curiosities. Aimo points out that Valletta’s show is weekly: «His continuity, but also his strong reputation and his professionalism, are rewarded by listeners». However, Radio Raheem’s audience is open minded and well-disposed to variety, change and novelty: «They trust the radio, so plays and ratings are pretty constant».

Along with the regular schedule, Radio Raheem periodically proposes special projects and collaborations with other local, national and international realities. Diego Montinaro is keen to mention Milano Trasmette Milano, which was born on the occasion of the Milan Digital Week 2018. Its first edition was a 36-hour marathon of the best musical realities from the city, created in partnership with the cultural association called Elita. From the top of the iconic Branca Tower, deejays, producers, musicians, artists, sound designers and cultural activists played and narrated a true or dreamed Milan.

«It was a strong and engaging experience, especially because I hosted a slot, too, and I supervised all the progress closely. I was there at the dawn and it was raining outside, so everything was very evocative». A year later, in March 2019, Radio Raheem came back to the top of the Branca Tower with Elita for the second edition of Milano Trasmette Milano, subtitled Torre Branca Universe round trip. The focus was on Milan again, but the perspective was different, as the city was seen from the eyes of the new Milanese people, artists and activists looking at the world and translating global trends through the streets of the city, in a continuous exchange of energy. «It was a great opportunity to meet interesting people».

Marco Aimo highlights another special project, called 25 A/V. In this case Radio Raheem and Kiosk Radio, a community radio based in Bruxelles, team up for a new audiovisual series showcasing local talent from Belgium and Italy’s music and visual arts scenes. In fact, all the performances are co-broadcasted simultaneously on both the digital platforms. In the intentions of its proponents, this special project can be a first step towards the creation of a wider online radio network from Europe and beyond. According Aimo’s words, «25 A/V should become a stable bridge between Italy and other countries to create a system and to make our reality known also in the rest of Europe. Perhaps what we lack in our country is the habit of efficient networking, but we have all the skills to do it».

With limited possibilities for people to move around physically, a reality like Radio Raheem now responds to a need and it gives the opportunity to travel with the mind and to open the vision. As Aimo underlines, «the beauty of this job, as well as the power of the radio, is to have exchanges with people all over the world, if not physically – because we cannot – at least through a digital platform». In fact, as Montinaro tells, «the next change will be a new digital platform, even with a smartphone app, which should be ready by the end of 2021 to improve the user experience and the ability to browse our archive, giving something even more interesting for our listeners».

Born in 2017 from the minds of music, art and culture professionals, Radio Raheem is a Milan-based web radio located now in the Museum of Design Triennale. Radio Raheem’s aim is to be an independent digital media that, starting from music, explores the world of contemporary culture. The radio was founded by Marco Aimo and Diego Montinaro.