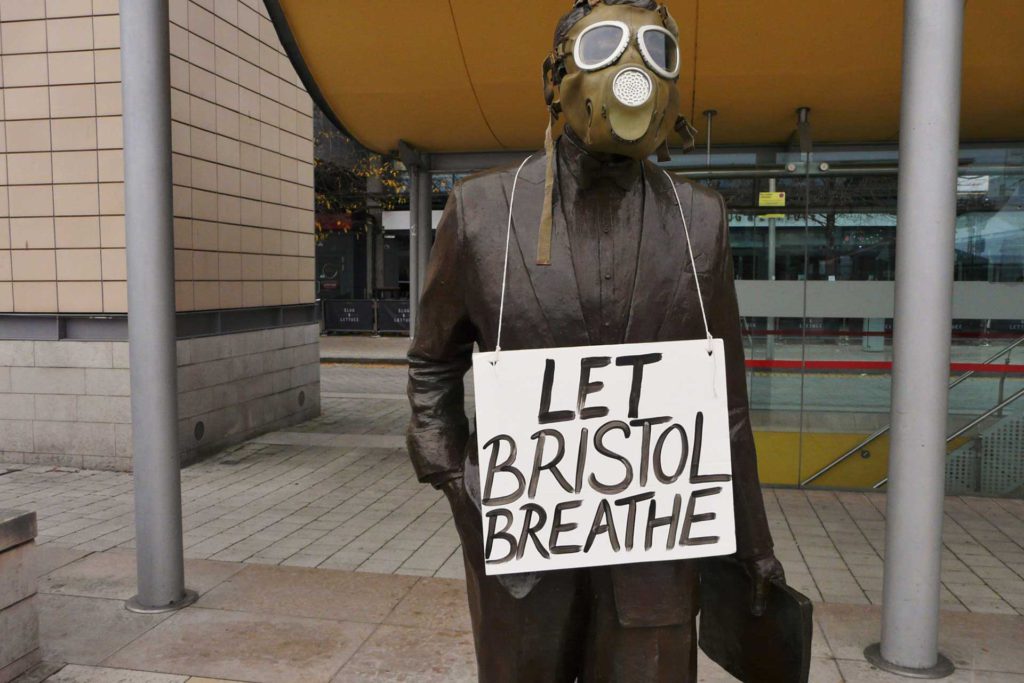 In Bristol, where the air breaches the annual objective for NO2, air pollution contributes each year to 300 yearly excess deaths, causing health issues to Bristolians

United Nations’s Sustainable Development Goal 11 focuses on cities, establishing the global goal of making them inclusive, safe, resilient, and sustainable. The British city of Bristol was chosen as the European Green Capital in 2015 by the European Commission for its improvements in terms of energy performance and its investment plans for local transport and energy. In February 2020, the city of Bristol launched the One City Climate Strategy, a plan to achieve a carbon-neutral, climate-resilient Bristol by 2030. As of summer 2021, residents are dealing with issues regarding local air quality and pollution levels. The North Somerset Council’s rejection of Bristol Airport’s proposed expansion is at risk of being overruled, generating a million extra tons of CO2 equivalent every year. Cities play a key role in climate change mitigation because of their environmental and demographic significance, as four-point-two billion people live in cities all around the globe (UNEP). This number is expected to rise in the current decade, as sixty-eight percent of the human population is projected to reside in urban areas by 2050. Public spaces make up between two and fifteen percent of the land in European city centers (European commission). Based on 2019 data from 610 cities in ninety-five countries, half of the world’s urban population has convenient access to public transportation (UN). Cities occupy three percent of the Earth’s land surface and generate seventy-five percent of the world’s total anthropogenic carbon emissions (CO2). In addition to their significant carbon footprint, cities are responsible for between sixty and eighty percent of global energy consumption (UNEP).

Located at the confluence of the Rivers Avon and Frome in the South West of England in the United Kingdom, Bristol is a ceremonial county and unitary authority since 1996. Bristol is the most populous city in South West England, with a population of 463,400 people inhabiting an area of 42 square miles (110 square km). Its urban area is the 11th-largest in the country, with a population of 670,000 inhabitants. Bristol is situated around 120 miles (190 km) west of the capital city of London and between Somerset to the south and Gloucestershire to the north. The area where the city lies has been inhabited since the Middle Palaeolithic and later became the location of the Roman settlement of Abona, recorded in the Antonine Itineraries of the early third century AD, and the Kings Weston Roman Villa, which was discovered in 1947 during the construction of Lawrence Weston housing estate. Bristol was mentioned in the Anglo-Saxon Chronicle of 1051 as a port trading with Ireland, and in 1067 Bristolians fought off Harold Godwinson’s sons who were trying to capture the city. In 1155, Bristol was given a royal charter and has been a county since 1373. Bristol City Council has explored different schemes for a clean air zone since 2017 and missed multiple government deadlines concerning air pollution levels. In Bristol, the air breaches the annual objective for nitrogen dioxide (Bristol City Council, 2020 Air Quality Annual Status Report), and the city’s air pollution contributes each year to 300 excess deaths, causing permanent health issues to Bristol’s residents (Health Impacts of Air Pollution in Bristol, Air Quality Consultants, 2017). The ‘Clean Air Zone’ act intends to reduce polluting road traffic by imposing a daily charge to older and more polluting vehicles driving through a designed zone. The implementation of this measure has been delayed from October 2021 to Summer 2022. Local Green Councillors have criticized Bristol’s Clean Air Zone for focusing on upgrading cars rather than bettering alternative transport and overlooking the issue of particulate matter, whose health impact alone costs Bristol £83m each year (Bristol City Council). In February 2020, North Somerset Council voted to reject Bristol Airport’s expansion plans due to the expansion’s detrimental effect on the area and the broader negative impact on the environment. The airport, owned by the Ontario Teachers’ Pension Plan Board, appealed, and the public inquiry started in July 2021. Thirty-five Green and Independent Councillors from Western England have signed an open letter to the Government calling on the inquiry to reject the airport’s appeal.

Dr. Alix Dietzel of the University of Bristol and Dr. Alice Venn of the University of Exeter have investigated the role sub-state actors might play in supporting the ecological transition that the city should undertake following the principles established in Bristol’s One City Climate Strategy, which calls for a just transition achieved through a fair and collaborative approach. Through their project, they intend to examine whether sub-state actors’ decision-making is fair, inclusive, and in line with Bristol’s One City Strategy. The six Bristol-based assessed public, private, and civil society organizations were Bristol One City Board, Bristol Advisory Committee on Climate Change, Sustrans, Bristol Energy, Black and Green, and Fossil Free Bristol.  On 27 July 2021, the researchers presented their initial findings from the project at an event organized by The Cabot Institute for the Environment at the University of Bristol. «We went about the project by conducting a series of interviews. We conducted twelve interviews, two for each of the organizations who participated in the project. We then observed over nine hours of meetings for each of the organizations, and we collected a lot of data: over 65,000 words worth of interview data and over 9000 words of observation data. We looked at the substantive issues that were being discussed and the decision-making processes at play thinking about key issues around climate justice, the One City Climate Strategy, how they were being discussed, and who was participating in those meetings», explains Dr. Alice Venn. In regards to the attention given to the issues of climate justice and climate vulnerability within the organizations’ meetings Dr Alix Dietzel reported that those themes weren’t focused on in the majority of the discussions. «Climate justice wasn’t mentioned explicitly in any meeting except at the Black and Green meeting where it was flagged as being part of their mission and part of their work. Vulnerable groups and climate vulnerability were not mentioned often and only by half the meetings, or half the actors in the meetings that we observed». The aim of the project is to inform the development of more just and inclusive climate policy responses and help lift the voices of the most vulnerable in the society who may be impacted most by the effects of climate change.