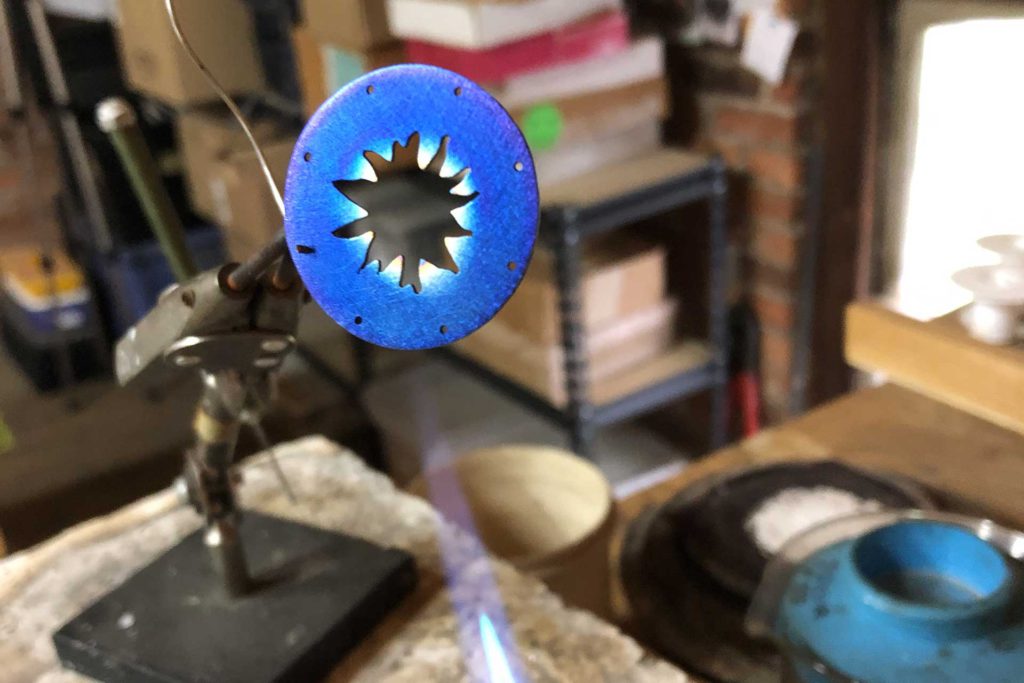 Titanium: one of the lightest yet one of the strongest metals used in jewelry

Since the Seventies, titanium has been on a rollercoaster ride throughout the jewelry industry. Its beneficial properties can also act as its downfall

The introduction of titanium into industries

Titanium is an abundant metallic element found on Earth and it takes up the twenty-second spot on the Periodic Table of Elements (Ti). «The crust of the Earth is about fifty percent titanium», explains E. Douglas Wunder, a jewelry artist specialized in titanium. «You can find it even in meteorites». Discovered in 1791, it wasn’t until more than a century later that pure titanium was first manufactured and isolated as a pure metal. The uncovering of a metal so light yet so strong led to an industrial birth amongst metallurgists. Owing to its reactive properties, the processing of titanium couldn’t be done through traditional extraction methods. Once the techniques to extract the metal had been unearthed, the Kroll process was developed to produce titanium commercially. Since then, titanium has been one of the most versatile metals used in a variety of sectors, ranging from the aerospace to the jewelry industry. Its color potential has made it an attractive quality for jewelry businesses and designers. That, together with many other of its useful qualities, has created a more affordable category in jewelry sectors and at a level high enough to compare it against silver and gold. Anecdotally, there are signs that titanium was used as minimal jewelry, such as studs, as early as its initial manufacturing in the Fifties.

The coloring process of titanium

The results of coloring titanium is what initially made it popular in the Seventies. Wunder was first introduced to the metal «for the use of its color» more than thirty years ago. «Titanium was popular as a jewelry object because of the color. So much so that its popularity declined after that because you wouldn’t see the piece for its design but rather for the use of the color. It got boring. Titanium takes its color naturally and the process for it is simple». By oxidizing the metal, electronically or by heat, new coloring takes place. The direct coloring of it is only on the surface of the titanium. A simple piece of sandpaper can scratch the color off. «Coloring is adding a layer of oxide on the surface». The poor thermal conductivity of titanium makes oxidizing through heat result in varying colors with differing effects; «You can simply take out a torch of any kind and wave the flame over the surface of the titanium. This doesn’t cause any harm to mother nature». Anodizing the metal allows for greater control of the coloring as well as allowing it to be more evenly distributed. «To do it in a controlled way, you can anodize it and that means putting it in a bath of water and applying electricity to the surface of the titanium, resulting in an oxide layer. Depending on the voltage you apply to it, you get a different layer of oxide and that oxide layer will determine the color». Whichever way the coloring is achieved, the result is a chromatic effect due to the optical phenomenon known as film interference. The issue of color variability and the lack of understanding of color formation on titanium as a metal led to much research and techniques re-interpreted to adapt to the metal throughout the 1980s. The anodization of titanium jewelry is done after it is machined into shape. The process changes the color whilst increasing its resistance to corrosion. «To get more variety of colors, you have to etch», a technique which strips the titanium of its natural oxides and results in different levels of colors when anodizing it. «Traditionally, hydrofluoric acid was used to get a thicker etch, which is one of the nastiest acids». As a more environmentally-friendly solution, a low-acid alternative called Multi-etch was developed. Either way, a ventilated area and a safe disposable routine is necessary when anodizing titanium.

The reason why this metal can be distributed among such differing industries is for the number of extensive properties it has. It is a non-ferrous metal — it doesn’t contain iron in appreciable amounts. This aspect of it contributes to its lightweight and non-magnetic properties. This quality encompasses its inertness which makes it completely corrosion resistant; a favorable characteristic for the airline industry and a reason for why the average commercial aircraft is composed of around one ton of titanium. This particular property is why the medical world has embraced this preferred metal for surgical implants and tools. It is hypoallergenic which explains the lack of reaction it has on parts of the body, even with those most sensitive to certain materials. This, with the added value of its purity (around ninety-nine percent), is what makes titanium jewelry a safer bet than gold or platinum — platinum being around ninety percent pure compared to the fifty-eight percent purity of fourteen karat gold. It alleviates the risk of skin irritations and rashes to those who have more sensitive skin and aren’t able to wear types of jewelry made from other metals. «A lot of pierced jewelry is titanium because it isn’t going to be reactive with the skin. A piercing is something which is made almost exclusively from titanium».

The extent of its properties surrounding strength and durability

Its durability and strength were the driving force of its name change. Previously known as manachite, the discovery of its supreme solidity resembled that of the Titans of Greek mythology and hence titanium was seen as more fitting to represent its potential. It has the highest strength to weight ratio of any element, a prime motive for why eighty-five percent of the space shuttle is made up of titanium. At its softest, titanium has over 30,000 psi (pounds per square inch) which is a lot more than platinum. This, paired with its lightweight qualities, is what attracts the jewelry industry. «It has the strength of steel but the weight of aluminum» explains Wunder. It is so durable that on average, a jewelry piece tends to have a five-year warranty to appropriately accommodate any damage that may occur. It also increases the levels of designs for jewelry to an extent. In comparison, tension set rings made with softer metals aren’t as secure as they would be if they were made from titanium. «A lot of the fine lines and detailed elements will maintain their structural integrity and hold up. They won’t crimp, bend or twist». It also adds another level of comfort without having to sacrifice certain designs which would need that much more material to execute. «It maintains its neutral presence. It’s great for something that is functional at the same time as being aesthetically pleasing». The above properties on durability and strength also contribute to the downside of titanium jewelry and «probably why it’s not used as much as opposed to other materials more associated with jewelry». Though earrings are a popular side of titanium usage, rings are also a preferred choice. Titanium wedding bands are amongst the most sought out yet they are also the least recommended. The representation of what is considered to be a ‘long-term commitment’ is countered by the metal’s inclusion in the elite category of strategic metals, not precious metals. Most importantly, unavoidable alteration to rings throughout the years is limited, if not impossible. As Wunder puts it: «It either fits or it doesn’t». Sizing and soldering the metal can’t be done with titanium; the most that can be done is removing a layer from the inner side of the band to make it slightly larger. When titanium jewelry started to gain popularity, so did emergency care. Its sheer strength meant that cutting them off of swollen fingers couldn’t be done through conventional means such as by using ring cutters. Dental, and even diamond tipped saws, have been required by many to remove titanium rings. «It will outlast us all», especially for the fact that it can’t be sent to a smelter to melt down like with gold or silver. Scraps and other pieces of titanium are simply thrown away or given to students, metalsmiths and other businesses who can find use from it.

In a more inclusive aspect, titanium jewelry is more affordable than gold or silver which makes it more attractive to men. «Titanium is abundant. Silver and gold are popular because you have to go hunt for it, making it more precious. They are tradable commodities so they have a value. People don’t really understand titanium so it’s not traded, making it less valued». Its strength and durability results in infrequent needs to get repaired, making it the ideal jewelry to wear for active people on a daily basis. The construction of a ring comprises the same equipment and engineering processes as stainless steel. However, the traditional rolling and soldering techniques are not suitable for titanium given its strength and density. Wunder explains that buying fifty cents worth of titanium would result in spending thousands for the same quantity in gold or silver. Although the final price which the customers buy it at is more affordable, the cost effectiveness of making jewelry and post-purchase modifications is negotiable. Although resizing and reshaping a jewelry piece made from titanium is virtually impossible, there are methods which could alter it slightly but which all «depend on how much you want to spend». Similarly, because titanium can’t adhere anything to it as «like in the common way that jewelry», titanium can undergo a more expensive process of welding. This requires specialized machinery which «can get very pricey». As with many aspects of the fashion and beauty sectors, titanium will continue to go through the same cycle of increased and decreased popularity within the jewelry industry. Whatever the case, titanium continues to be researched and developed for future innovations and techniques, steadily becoming more and more well known. «I hear the word titanium a lot more today than I did twenty years ago», says Wunder. «It would never replace gold or silver. It’s just a different metal. Titanium could be used more frequently as time goes on but it would never replace gold or silver».

E. Douglas Wunder is a jewelry artist from the US who specializes in titanium. He has been working in this sector for more than thirty years. He also teaches to those who wish to know more about metal work in jewelry whilst continuing to work on detailed and intricate designs for his jewelry pieces.