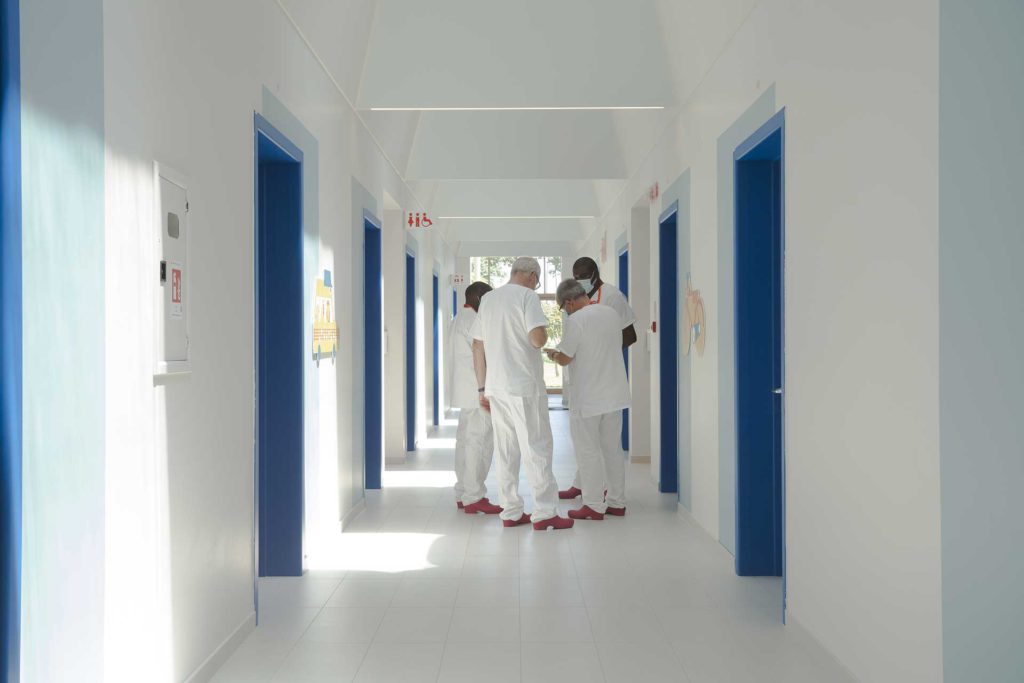 Twenty percent of the project was paid for by the Ugandan Ministry of Health. Built with the rammed earth technique, the hospital has more than two thousand solar panels

StudioTAM Associati and Renzo Piano Building Workshop designed a Children Surgical Hospital pro bono for the city of Entebbe, Uganda. The project was created by humanitarian organization Emergency in accordance with the Ugandan Ministry of Health. «The idea for the hospital in Uganda» explains Rossella Miccio, President of Emergency, «was born in 2007 during the opening of another hospital, the Salam Centre for Cardiac Surgery in Khartoum, Sudan – we invited several health Ministries of Sudan neighborhood countries, among them was the deputy Minister for Uganda. He told us that kind of hospital was something they needed in Uganda as well, but they needed some external support». The project did not stop there. Given the identifies and widespread needs they had the chance to pinpoint, «we decided to sit together with several Ministries of Health of different African countries to discuss with them the idea of establishing a network of centers of excellence in different specialties that could work together both in terms of patients and in terms of training of personnel too – and also in terms of what a hospital should be like to provide equal access to high-quality healthcare». After identifying ten countries with different medical needs, they established what they call the African Network of Medical Excellence. The Children Surgical Hospital in Entebbe is the second one to be completed, after the Salam Centre for Cardiac Surgery in Khartoum. Social and environmental sustainability were given priority in the project, by involving the resident communities and implementing building solutions that allowed them to build with local materials and run the building on clean energy.

The Hospital: Impact design and Architecture

The need for a surgical hospital for children in the area was clear: according to the UNDP Human Development Report in 2020 twenty percent of local children needed surgical care, with only four pediatric surgeons available. Less than two doctors and five beds were available for ten thousand people. The design principle follows all other Emergency hospitals: working with the idea of ‘healing architecture’, according to which the place where you get treated is itself part of the healing process. Non-profit projects linked to healthcare should not renounce having a pleasant environment in favor of convenience. One of the most challenging points, according to the team, was to cope the prerequisites, putting functionality together with sustainability «reinforcing» according to TAM Associati Architect Raul Pantaleo, «the idea of a place where high-quality treatment is provided for all». The architectural studio works with impact design to reach social and environmental sustainability in their projects, by committing to strict standards, especially considering that they are working in the realm of nonprofits: «it is imperative that we do not switch from greenwashing to ethic washing». Projects must be carried out properly and with transparency: «at this moment in history we need to work with a radical approach». Recalling the ideas of decades-lasting political movements, Pantaleo argues that «another world is not just possible, it is needed and urgent».

The environment value to place buildings

During the Entebbe project, finding the land for the construction site was key to achieve all the goals the team had set, and build a hospital could be efficient and lasting: «Emergency always gives strict conditions to the hosting countries». In the case of Entebbe, «we were asking for a piece of land that was environmentally reachable». Those kinds of sites are «the most sought-after» having a relevant economic value. For Emergency, the environmental value of where the hospital would be placed was embedded in the healing process itself. Most people who seek medical help in hospitals are in distress, coming to a building that provides a safe space, in critical areas such as Uganda, gives patients confidence in the healthcare system. «Gardens have a central role» in all Emergency projects, and they had it even before architects were involved. «A well-kept garden mirrors the standards of care towards the patient, even more so in war zones» where plants and vegetation «are a symbolic message as well». This is not always well-received by donors. Miccio explains that, especially in the past, «it was difficult to explain to people why we wanted to have appealing hospitals where we were taking care of the landscape, gardening and the facility itself». «It is much easier now than it was years ago» and it is more widely understood that «being in a structure that does not just treat your physical wounds but also takes care of your emotional needs and provides a safe space» is the key, «especially in war zones».

Built with these principles in mind, the hospital has nine-thousand seven hundred square meters of floor space, three operating theaters, seventy-two beds, six of which for intensive and sixteen for sub-intensive care, an observation and stabilization guard, six clinics, a radiology room, laboratory with a blood bank, CT scanner, pharmacy, administration, auxiliary services, a guesthouse for patients from afar, reception, medical training rooms, and an outdoor play area. The structure was created with the rammed earth technique, by compacting local soil within pre-placed vertical framework boards. This method is convenient in all those areas where soil does not allow to make sun-dried clay bricks. It also «provides thermal inertia, keeping temperature and humidity constant inside the hospital», thus lowering the need for energy consumption. Hospitals are still energy-consuming structures, due to the machinery used and the need to constantly illuminate many rooms. The maximum hospital demand in this case is 750kW. One third of energy consumption during the day is covered by more than two-thousand solar panels placed on the roof, covering an area of three thousand square meters: «the aim has been to save energy and resources wherever possible, without diminishing the facility’s operating standards in any way». The overall cost of the project was 22,715,036 euros, twenty percent of which was paid for by the Ugandan Ministry of Health. The yearly running costs are estimated at 5,745,000 euros, twenty percent of which will also be paid every year by the Ministry. The rest of the costs were covered with donations by individuals and companies.

The local staff of the Entebbe children surgical hospital at full capacity will be composed of 385 employees, 179 of whom will be medical workers and «The ratio of local to foreign is four to one amongst surgeons, nurses, pharmacists and technicians». As for the non-medical workers, ninety-five percent of them will be Ugandan. The children surgical hospital does not just fulfill the needs for surgeons and facilities for local children in need of care, it will also provide the medical staff with new specialist skills: «the hospital will train a generation of doctors and nurses who can raise the standard of pediatric surgery all over Uganda and beyond», improving health, social and working conditions. The local community is involved on different levels in all Emergency projects, from labor to including local techniques and craftsmanship.

Emergency is a humanitarian NGO that provides free medical treatment to the victims of war, poverty and landmines. It was founded in 1994. Gino Strada, one of the organization’s co-founders, serves as Emergency’s Executive Director.