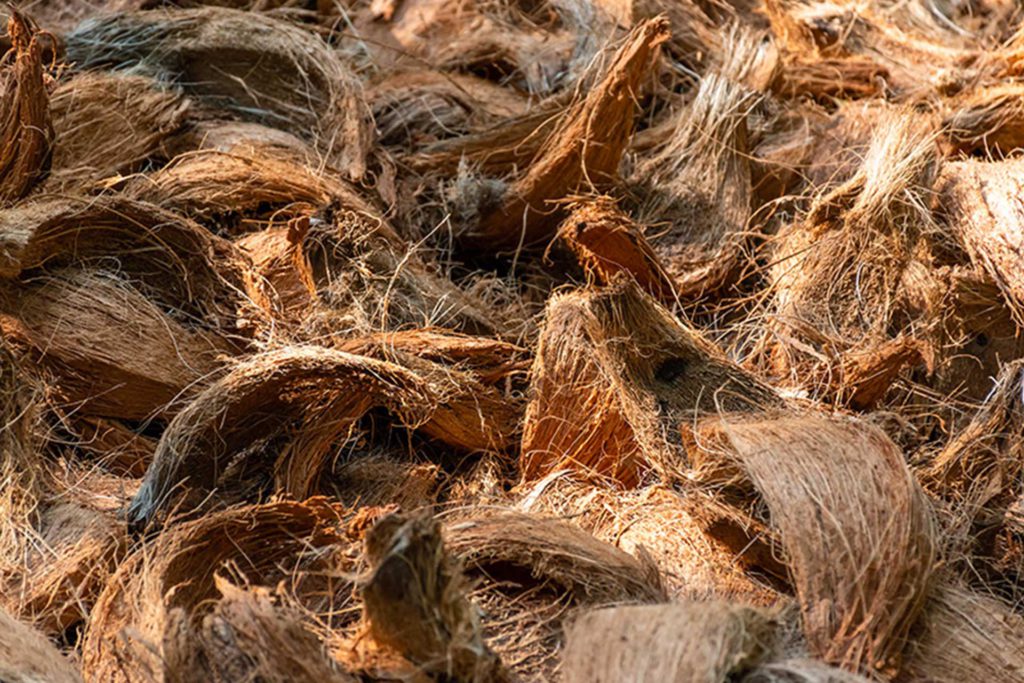 Coconut husk, biomass from coconut: fibers are known as coir

According to the International Coconut Community, working with coconut waste is a business that ensures benefits for both producers and South eastern suppliers

The use of coconut husk fibers

A recent study financed by the University of Exeter in the United Kingdom flags that coconut oil production poses a major threat to the environment if compared to palm or other vegetable oils. Deforestation related to coconut cropping affects twenty plant and animal species per million liters produced, as the crop is mostly grown on tropical islands with rich diversity and many animal species. There are about seventy billion coconuts that are grown each year, and not all of them are used for production: while a part is employed for the making of oil or exportation, the eighty five percent of the total amount harvested worldwide is discarded and then burnt to prevent coconut waste accumulation, contributing to CO2 and methane emissions. Many producers have decided to withdraw coconut parts released into the environment and treat them as a raw material after their flesh and water have been extracted. The fibers from coconut husks, which are known as coir, are versatile and can be used in a variety of products: coconut husk chips are a used as a planting medium that help the plant retain moisture and resist to fungal growth; coir is used to make doormats and brushes, or to make twine, particle board, and biodegradable packing material, and is even a component in mattresses and floor tiles. Coconut has also been used to make a composite material out of coconut husks to create automotive trunk liners, living wall planters, and electric car battery pack covers. In addition to being stronger and stiffer than synthetic plastic fibers, this material is lighter and offers better performance, which can lead to cost savings for companies. Both consumers and businesses are drawn to materials that repurpose or otherwise incorporate waste, and this represents a business opportunity moving forward.

Goodhout, a Dutch company pioneer in the construction of interior and building material made of coconut husk only, presents coconut as a wood alternative solution. «The pressure on the price of wood and the use of toxic agents in the engineering industry is making society demanding for sustainable materials that replace thermoset plastics or tropical hardwoods», explains Silvia ten Houten, founder and CEO, at the Best Practices for Coconut Husk Product Development webinar organized by the International Coconut Community. The husk of a coconut comprises thirty percent coconut fibers, and seventy percent flesh: the latter contains a significant amount of lignin, a substance that is found in ligneous cell walls which, in a melted form, is suitable as an adhesive for the coconut fibers. On the other hand, the husk is processed into small pieces and pressed under hot pressure into boards. As regards its properties, such as sturdiness and fire safety, the board material that is obtained is comparable to or better than medium density fiberboard. Goodhout is using upcycled existing raw material for the making of their products; this way no land is occupied for growing the trees that would eventually be cut for harvesting the coconuts. The production chain is based in Europe, in twenty different factories that take the coconuts and de-husk them by hand or by machine using advanced mills. Once the husks have been sundried, they are milled and prepared to be hot pressed. The coconut husk panel does not contain formaldehyde (NAF) as the natural glues are activated during the production process. The first Goodhout product line included flat surfaces for interior use, countertops, room dividers, wall panels, shelving, tables and cupboards. Research and development will unlock further applications of this material for flooring, eternal facades, kitchenware, furniture, homeware and even automotive dashboards.

Another brand who uses coconut as a raw material is CoconutBowls™, that was founded inspired by the opportunity of reducing single use plastics, sourcing sustainable coconut shells and providing jobs for local artisans and farmers. Coconut Bowls factory reclaims discarded coconut shells and turns them into bowls for food, shells that could otherwise be thrown away as a waste or burnt in stocks. Small pieces of coconut and other wooden offcuts from local builders and artisans are also sourced and handcrafted into spoons, forks, knives and chopsticks. Before entering the production process, coconut shells are treated by outside companies to take the flesh and the water out from them, then Coconut Bowls factories cut, clean and sand the coconut shells, turning them into bowls, which are rehydrated using an organic virgin coconut oil polish. Coconut Bowls has achieved carbon neutral shipping through offsetting the carbon created from shipments through the purchase of carbon credits through Cool Effect, a not-for-profit that founds local scientifically validated projects, that contributes to building biogas digesters and offers the access to clean, safe energy for the local communities.

The advantages of using coconut as a raw material

By taking residual material from the coconut in its entirety, producers are able to ensure sustainable harvesting and production processes from start to finish. These methods help to prevent deforestation, which is one of the causes of soil unproductivity over a long period, and they are CO2 neutral. During production, glue and chemical agents do not need to be added, as natural glues are naturally extracted from the coconut itself while subjected to the production phases, cutting one third of the total production costs. Working with coconut waste is  inexpensive: all the sourced materials come from waste, meaning no new trees are planted to meet the required quantities for production. Another significant aspect about coconut by-products is that they’re completely biodegradable and can be easily decomposed. Unlike polyester and plastic materials, it can be broken into smaller parts and mixed in with soil that will absorb it in a few weeks and hold its minerals and micronutrients. The majority of coconut suppliers are based in the Philippines, India, Vietnam, Thailand, Indonesia and Bali, developing countries that can use an extra source of income for farmers. If local companies work together with European facilities to help reduce the amount of waste derived from coconut cultivation, both Western and Eastern countries can benefit from the deal. One of hand, companies get the raw materials for the manufacture of sustainable products, while on the other, the countries of origin are supported in their development goals and artisans are paid for their work according to global standards.

The intergovernmental organization of coconut producing countries was founded in 1969 under the aegis of the United Nations Economic and Social Commission for Asia and the Pacific. The International Coconut Community currently includes twenty member countries that account for over ninety percent of world coconut production and international exports. Their objectives include promoting, coordinating and harmonizing all activities of the coconut industry which sustains the lives of millions of small farmers as well as those engaged in production, processing and marketing of coconut products.