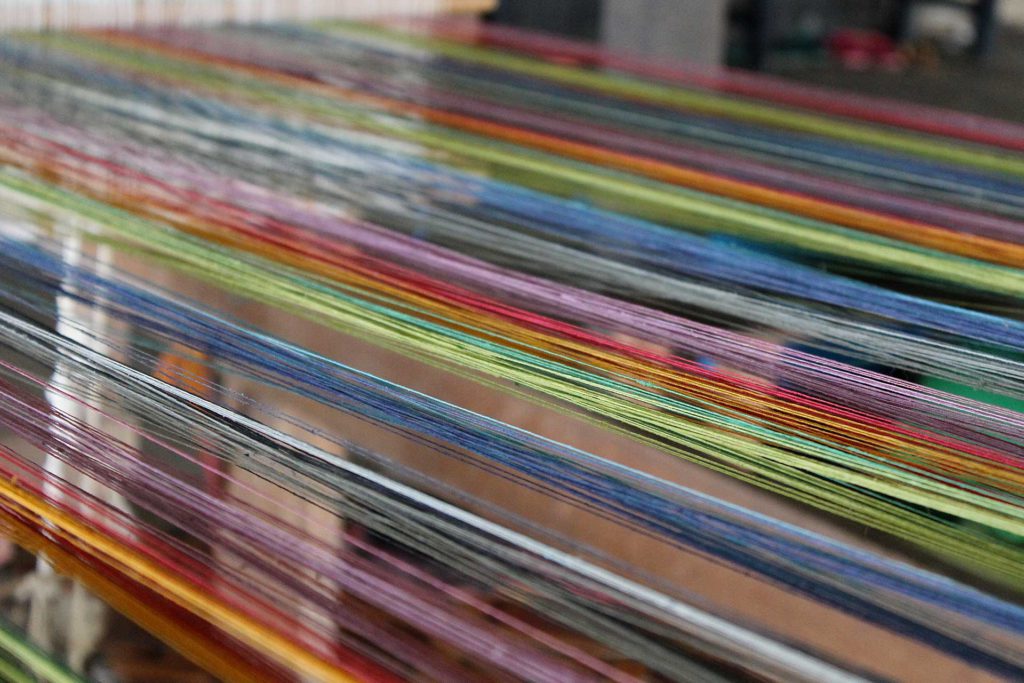 If silk isn’t the first natural microfiber, then lotus fiber certainly is

«We aren’t done discovering all of its properties». In conversation with Samatoa on the venture into the world of the lotus fiber

In 2008 Cambodia was experiencing one of its many droughts, affecting the quantity of production of the renowned Mulberry leaves; the sole diet of the silkworm. This dip in raw materials available led many to search for alternative routes to pursue. Samatoa is a social business located in Siem Reap which opened in 2003. They experienced the consequences of the drought and couldn’t keep up with their client’s demands for silk. The act of finding fiber within a plant or tree in itself isn’t that difficult of a task. The issues arise when it is time to extract the fiber. Awen Deleval, founder of Samatoa explains: «All plants have fiber inside. The next step was to find a way to extract it. Then to spin it, weave it and eventually dye it». One such fiber which proved to tick all these boxes was the one extracted from the lotus stem which «revealed to be a fiber with a bigger potential than others». Given the lack of direct experts in the textile and fiber industry present at Samatoa, their research and findings are sent to institutions such as that of South Korea and the French Institute of Textile and Clothing. By doing so, a more rounded idea backed-up by scientific evidence provides the social business with credibility. Deleval points out that «our main advantage is because we don’t know, we do a lot of research. We explore more than the techniques. We learn from nature and try to research the process which humans have never been able to maintain. Nature teaches us more than school does».

The lotus is an aquatic perennial plant which thrives in shallow bodies of water such as ponds, slow-moving lakes and lagoons. The leaves and the flower float on top of the water whilst the petioles remain submerged in the water and can grow up to two meters long. The lotus is native to southern and eastern areas of Asia and is also known as sacred and considered as a symbol of purity, enlightenment, self-regeneration and rebirth. Farmers in Cambodia harvest the plants for their flowers and seeds which they can sell at the market. The stem of the plant was always left in the water as waste though; it was never considered as a useful and profitable part of the plant. By breaking open the stem and gently pulling it apart, thin strands of fiber emerge. To determine its scientific properties, they sent a sample over to the French Institute of Textile and Clothing in 2016 and they found that it is the «first natural microfiber known in the world». Microfiber is defined as a fiber with a linear density less than one dtex (grams per ten thousand meters of yarn). The structure of them vary but the overarching concept is that they are made from synthetic materials, the main of them being polyester and polyamide. Under the microscope, the lotus fiber has a «complex architecture» in which the surface is coated with holes which resemble a sponge. In parallel with the attractive qualities of microfibers, some of the properties which arise from the lotus fiber structure include its softness, lightness and can be considered as the most breathable fabric in the world. The holes present at the microscopic level indicate the speed in which the fabric can absorb liquid (such as sweat) and excrete it. As with a sponge, it always goes back to its original form. In the case of the lotus fabric, the fiber’s structure makes it difficult to wrinkle. Although there are many properties which have been deduced from experts in the field, Deleval affirms that they «aren’t done discovering all of them».

The extraction and production of lotus fiber

The production line is minimal in the case of Samatoa and includes no «middle man». They collaborate with farmers who go out on their boats — a simple wooden structure with no motor — to harvest the lotus flowers for their day at the market. Samatoa buys the stems off of them which would otherwise go to waste. This step contains little to no intervention from Samatoa: «We do not add any chemicals and contrary to organic cotton, which requires huge quantities of water, the lotus just uses the water available in the lake». There are around 150 trained spinners who are supplied with supplementary income for their work to extract the fiber from the lotus. «We are committed to creating a fully sustainable manufacturing process that not only positively impacts the environment but the people as well», explains Deleval. Given the secondary nature of these jobs, the women who are hired as spinners can work from home to simultaneously care and provide for their children. The extraction of the fiber is delicate work and requires patience; the stem is snapped and gently pulled apart to reveal long strands of fiber which are then rolled on a platform to form threads. The fiber is coiled up tightly and saturated within the stem, allowing for breakpoints every two to three centimeters. According to Deleval, the stem contains around fifty microfibers and can be cut about twelve times. In numbers, around one yarn produced by the spinners contains at least six hundred microfibers. To make one meter of fabric from the lotus yarns, around forty thousand stems are used. The overall period of time it takes for a weaver to make a small scarf stretches over one month — the spinner takes around ten days to extract and spin the fiber to make the necessary thread and the rest of the time is used to dye, soften and weave. Admittedly, the dyeing process is the least sustainable aspect of it and «the only point which doesn’t contain natural resources». The threads are Oeko-tex certified dyed before weaving to ensure maximum saturation in which no heavy metals are used. The main reason that natural dyes aren’t used is for the inflexibility of the quantity, especially for bespoke pieces as natural dyes can’t be stored. Given the precision and delicate-nature of the lotus fiber, traditional Cambodian handlooms have been tweaked to guarantee the best outcome for such a thin fiber. These are only found in their eco textile mill, an area dedicated to the production of pure lotus fabric. If the fabric is entailed to be made with mixed fibers, the pieces can be woven amongst the weaving villages as it isn’t as delicate as pure lotus fiber. «The lotus textile is timeless with no mechanization. It helps us understand what we are doing. If there is any problem in the quality we can see it directly».

The circular economy of lotus plant

Although the stems are collected to avert waste to decompose in the bodies of water, the method in which the fiber is extracted leaves leftover pieces. «With every one thousand square meters of lotus textile produced, three hundred tonnes of new stem waste is made» which is why their research and development focuses on perfecting this circular economy. One way which they found effective to use up the new waste is through mulching. A popular practice in Cambodia is using wood or plastic to cover the fields to maintain soil moisture and requires a lot less water to grow resources. This task results in micro plastics left in the soil through which depletes the nutrients and decreases the usability of the land to only a few years. Lotus stem mulch works with the same concept, additionally providing the land with extra nutrients. Collaborating with the local farmers to execute this technique essentially closes the circle in which the beginning and the end meet in the same place. One of Samatoa’s newest ventures involves vegan leather. Lotus leather is a «new composite material which comes entirely from vegetable waste». After ordering samples from other potential competitors, Deleval found: «They all contained plastic». He described it as similar to the time when people were trying to market bamboo fiber as something other than viscose which needed much chemical and plastic enhancements to act as fiber. «We are in the middle of the research and development side of it and creating the prototypes. I can’t tell you all of our secrets but we use the base of bio-plastic which is made from glycerin, starch and water. Then we bring the lotus fibre and other ingredients to meet the properties of animal leather». Although the process of the lotus fiber requires little to no machinery, Deleval points out that this lotus leather will require more machinery to keep up with the quantity. There is still much to be discovered from the lotus plant; even from simply the stem itself. Perfecting the circular economy requires experimenting with different techniques and venturing into a variety of sectors. «We have a vision», explains Deleval. «It’s a bio gas project. Thanks to the waste of the process we could provide electricity to everybody around the lake for free and forever». For now, they aren’t appropriately equipped to transform this vision into a reality but it is definitely a possibility for the future. In the meantime, although the operation which surrounds the lotus fiber is a slow and tedious process, its functions, even post-production, are beneficial.

A social business located in Siem Reap, Cambodia. After being opened in 2003 by Awen Deleval, its initial purpose was to produce pure silk. Issues arising from droughts led him to discover the lotus fiber in 2008 and since then, they have been researching and developing to discover what else the lotus plant has to offer. They incorporate socially responsible manufacturing techniques to maintain sustainability and allow the emancipation to Cambodian women.