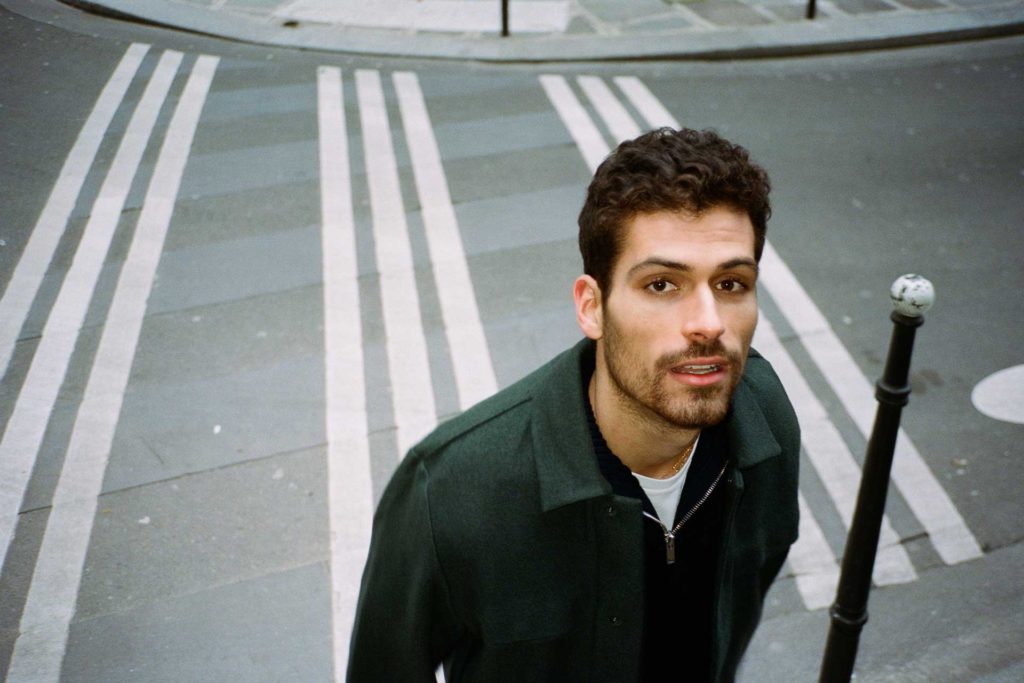 Oscar Anton: Chocolate and music for breakfast – cartoons were a prize for the weekend

«What is the opposite of waiting for release? To release as many songs as I can» Oscar Anton challenges the limits of the music industry

Galeotto was the Coldplay concert that made Oscar Anton fall in love with music. The French artist had an epiphany: it was his father’s birthday, Oscar was about ten or eleven years old, to celebrate they went to the crowded Paris stadium to watch the band’s show. Chris Martin was on stage, all the stadium was singing with him, «I remember this moment because I knew watching them that I would do exactly the same; I could picture myself in the place of Chris Martin». This was not the first time Oscar encountered music: at the age of seven he started studying at conservatory classical music and playing piano. «First the duty, then the pleasure» is a formula that worked for Oscar as well: his first years as a music student were loaded with music theory, classical music was not his passion, but a lesson whose results are linked today in its songs. Classical doctrine has the ability to express emotions or tell a story without using words. It is a melody. What Oscar brings as a heritage is the capacity to narrate through notes: «it influenced me to be focused on the music first, the classical part inspired me in creating music». Lyrics come in a second step. The creative process starts with the sound written on guitar, on piano or through the computer. «I know that I have a good song when I have a good melody». The majority of the people don’t even listen to the words at first; the skill lies in capturing the audience with the musicality of the words, not with the words themselves. When it comes to choosing the lyrics, Oscar is fascinated by the deceptions of the text: simple sentences can hide deep meanings, they encourage the listener to analyze below the surface. Reading a musical text is like taking part in a treasure hunt. That’s why Oscar’s favorite poets are songwriters. One of the reasons the French musician writes in English is to instill a degree of mystery in his lyrics: this trick was born from the desire not to be immediately recognizable to the ear of his first audience made up of French people.

The second reason has its roots in a key moment of Oscar’s artistic education, his breakfasts starting at the age of ten. Raised on hot chocolate and CDs, Oscar’s parents didn’t allow him to watch TV before going to school – staring at screens wasn’t educational. What may have seemed like a punishment has turned out to be the greatest gift for Oscar: cartoons were a Saturday and Sunday concession, during the week he could pick whatever album he would like to listen to from his parents’ collection. It turned out they only had international music and this influenced Oscar to sing in English. Opened the first cd holder, a new world opened up for Oscar: his snack companions were Bob Marley, Robin Williams, U2, Sting, The Police. From that moment, pop music became his expressive code, he let Youtube teach him how to play the guitar and began to collect as many experiences as possible. One of them made him meet with the hardest audience he had ever had and at the same time made him realize the meaning of the role of the public for an artist. When he was a teenager he used to play in a retirement home. «Most people were affected by Alzheimer or other diseases so they didn’t realize that someone was playing, most of them weren’t listening to me or looking at me. I was just playing alone in my head». His actual audience is way younger but the current times are changing the perception of music as a choral moment, rather it is a tool for sharing emotions. The pandemic has dethroned many things but has empowered music and art as a therapeutic tool. The performance on stage is an experience for building a connection between the artist and the audience, fundamental for the musician as a dimension in which he can express himself in toto; now that the online is the new on-stage, videos are the new performances. The cover of an album, the social media of an artist, the Youtube channel for videos are the presentation tickets for a song before listening to it. «If I don’t like the visuals I’m pretty sure I won’t like the music», the visual language nowadays is the DNA of an artist, a way to tell a story and to be more creative. «For example, Nuits d’été was going well on Spotify but then we released the video on Youtube and it became huge. The combination of music and video made the song special to the people». In the history of music videos an adherence between the mood of the songs and the vibes of the scenes is recognizable; Oscar overturns this harmony by introducing a natural contradiction between the words and his movements. The space of the video is the stage of the singer-songwriter who expresses his optimism, whatever is the difficulty to be faced. As in real life, so behind the screen, the artist has a positive attitude in reading life situations as a lesson from which to learn something and grow.

Filtering events to get the best of them: this is the goal of Oscar’s songs. «When you are depressed you listen to depressing music, but if the song at the end says ok you had a bad day but then is gonna be alright, the sun is coming. This message is relevant». Oscar’s lyrics are stories of truth, the first songs are facts that happened to his closest friends, not feeling confident in getting naked in his words. Last year he started the project ‘three songs in a month’ and he didn’t have enough subjects to write about: that’s when his work became autobiographical.The project was ambitious, consisting in a large work, being alone for a year and in front of a computer, but challenges are necessary to get better. The idea came up as a response to a question Oscar made himself once he decided to subvert the rules of the music industry. «What is the opposite of waiting for release? To release as many songs as I can». The music industry is tricky. The golden cage looks tempting, an entire team is at the service of an artist. Like all spells they vanish after a while: a music label persuades more artists, none is the priority and a system moderated on pause and action is triggered on economic strategies that can clash with creativity that is timeless. «Being an artist means creating all the time because you are evolving and getting better, but I was always waiting for people to tell me when I could release a new song. I decided I was going to do it by myself and if this hadn’t worked out it would have meant I wasn’t good enough». The desire for freedom made Oscar decide to become the manager of himself, to learn the strategies, how to produce songs, how to mix them, how to record them, how to make visuals and how to shoot them. The key for freedom is knowledge and the desire to learn is a consequence of realizing the needs of being independent.

In order to produce music that is the mirror of the artist, the artist must be in control of as many things as possible. If the producer had in hand the power that was concentrated in the recording studios, today the studio can be anywhere, from the bedroom, to the kitchen or the park. The musician no longer has a dependent relationship with others, he is autonomous in his choices and spaces. «Maybe one day we will see only independent artists and major labels will disappear or there will be just another form of labels: something that we have never seen before. I have my label now and in the future I want to work with artists that are completely independent. If I can help I want to do it without interfering in their creative process, I don’t want to impose anything». It’s in this ‘go with the flow’ state of mind that the song ‘Bye Bye’ came out. At the retreat of a vacation just made with friends after six months of imprisonment, some music played just for fun has turned into a hit. «I just wake up and make music, that’s my life, I feel pretty lucky»; the only complaint that Oscar has regarding being a musician is the never-ending relationship with the computer. Nature is the artist’s second home and the sense of freedom he seeks in making music is the same as he finds on the surfboard. Music has always absorbed the influences of street cultures or communities built around sporting passions such as surfing or skateboarding. These communities have always criticized mainstream things, have been looking for their own stylistic code that distinguishes them from others; today maxi t-shirts and big shoes are the favorite fashion items of Billie Eilish or Justin Bieber. The desire to be different has turned into normality and homologation. Oscar wants to rejoin the authentic sense of freedom, in life and his songs: «I love being an outsider». If music goes hand-in-hand with cultural scenarios, the association between music and cinema is even stronger. The music composer has the power to create an atmosphere, orchestrating the emotions of human souls. «Hans Zimmer is one of my favorite composers for film of all the times. My priority now is to release music for me but in my career I would love to do that. I love to learn from people who write chords».

is a composer, author, songwriter, multi-instrumentalist, producer, video-maker, entrepreneur of himself. The 24-year-old French artist of Italian origin has created his own label and the new single ‘bye bye’,
completely self-produced, from songwriting to the visual part which has already become a hit and has been remixed by Bob Sinclair.