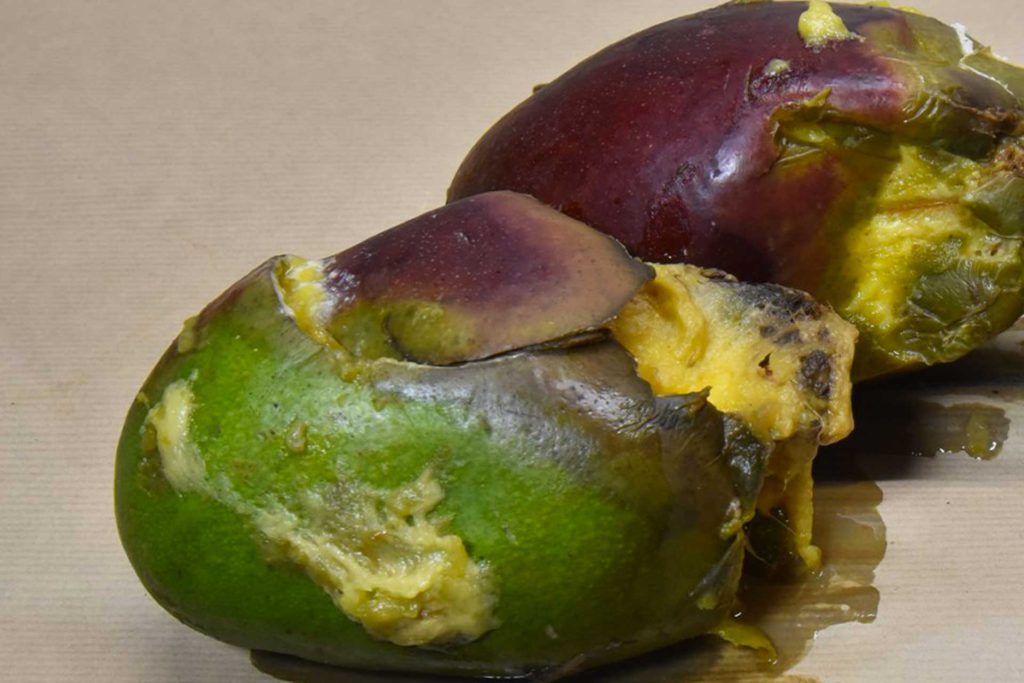 From mangoes to leather: Fruitleather, the idea of two classmates

From the Rotterdam harbor straight to the Fruitleather workspace: the story of Hugo and Koen repurposing rotten mangoes in the European biggest trade-hubs, Netherlands

The Netherlands: one of the leading fruit importers and traders

Around fifty-five percent of mangoes in Europe are imported by the Netherlands, making the country one of the leading fruit importers and traders. In 2019, the trade-hub imported around 180,000 tons of vegetables and 500,000 of fruits. There is a demand for importing various fruits in the Netherlands since approximately eighty percent of local fruits are made up of imported products, leaving the Dutch-grown fruits mainly to apples and pears. The country is a transit area where 3,95 million of 4,23 million tons of products were exported from overseas, composing over ninety percent. Hugo de Boon and Koen Meerkerk considered this circulation and trading during their research, which has set an issue of food waste that should have been tackled. «Forty-five percent of all fruits are being wasted, and thirty percent is lost in harvesting, ten percent as a result of import/export and five percent thrown away by the consumer», says De Boon. The point of reference and focus fell on the ten percent of waste produced during transportation since the market place, situated on Binnenrotte square next to the De Boon and Meerkerk’s academy, was operating several times a week. «Ships come from Brazil, Sri Lanka, India, and Peru», says De Boon, «We work with companies that sometimes throw away 1000 kilos of mangoes at a time that we later take; and there is a certain percentage of products you lose during the transportation. We are not importing fruits ourselves for our production and take away whatever we know will get discarded eventually».

Fruitleather began as a school assignment for Hugo de Boon and Koen Meerkerk, where the task was to create a project that would gain exposure. Recent graduates from Willem De Kooning Academy who specialize in spatial design pursued their minor in branding, where they suggested an idea that five years later formed into a company. The concept focuses on producing leather-like material by utilizing food waste generated as the ships bring rotten nutrients, due to the cooling system or other factors, to Rotterdam harbor. The brand currently creates the fabric using leftover mangoes as they possess the characteristics required for creating the ‘leather’. Responding to fast fashion and the urge to implement sustainable practices to tackle food waste, the brand travels worldwide to present their know-how. During their initial experiments, they extracted pigments from raspberries to later use in silkscreen printing or considered using the wasted food from the market to produce souvenirs. They have noticed in the process that the dried pulp was acquiring characteristics similar to fabric, «Koen extracted the pigments from the food once and left the fruit in the window seal to dry only adding the sun, and it turned into a hard piece of dried food. It had certain characteristics that made us experiment with it later and ingredients that would make it flexible, strong, and if we add this pattern, it will look like leather», concluded De Boon. Collecting food from Dutch distributors, De Boon and Meerkerk put them in the manufacturing machine, where the stones are being removed along, and the moist is being processed. Through mashing, cooking, and drying, they ensure the natural and sustainable process. «We have some open source steps: getting these mangoes by electric vehicles from the harbor, delivering them in buckets, throwing in the machine to destone the pip out of the mangoes. The puree is dried with natural ingredients to get the right properties of the material in the end. Then we have some raw material sheets that we produce ourselves in our workspace. We develop specific clothing with the clothing supplier, and we bring these sheets to an external finishing partner that can apply this coating and embossing so that it will resemble crocodile leather or anything that our consumer wants. Within the coating, we can apply any color». Started as a solution for not spending money on resources while preserving the values set at the beginning of the project, De Boon and Meerkerk say: «Our material is an alternative in terms of CO2 reduction. Leather comes with chemicals that end up in the environment». There is still a difference between the animal- and fruit- leathers. «(Animal)leather is stronger and durable compared to our material. It was present for two thousand years, and we have been around for five years. We wanted to make our product durable, strong, animal-friendly, and not polluting. This is our goal, but we are not there yet», says De Boon, and to ensure transparency in communicating their brand’s activities to customers, De Boon admits to using PU in production. «We add a backing to our material made of polyester as a strong reinforcement. We are now working with organic cotton, and our raw materials are 100 percent natural, but once we bring it to our finisher, a PU coating goes on top, and the polyester base bag is glued. As our finishing partners are also developing their products in more sustainable solutions, we have a starting point here».

BlueCity – An incubator for circular start-ups

It can strengthen its circularity by sharing the leftover stones to cosmetic companies and the leftover juice and moist to those brands that incorporate alcohol in their manufacturing. Managing the waste is not yet listed in the company’s plans as it does not want to lose focus from improving the quality of the fabric. Difficulties faced include the outcome that differs from the supply of the crops since Fruitleather works with around five varieties of mangoes; each needs an individual approach because of the fluidity of moisture and juice quantity to reach the relatively same results. This variety of crops influences the sustainable consequences as well, «if there is a need to dry the mango, for example, for five hours, the next time we will have to dry for ten hours. Then the product becomes less sustainable than the previous one». De Boon mentions their perspective on strengthening the system and understanding their vegan production to later focus on excelling in a circular economy. The Fruitleather office is another project of De Boon and Meerkerk as they are graduates in spatial design. While science is required to accomplish the fruit leather initiative, the product design aspect has helped them build their workspace in the Blue City. An incubator for circular start-ups – BlueCity – invites enterprising minds to network and develop actions concerning the impact increase, zero waste, or creating a future-proof material. Fruitleather is one of the thirty businesses hosted under the BlueCity roof, built from an empty pool named the Tropicana building. The pandemic has affected the global fashion industry, both in terms of production and sales. The current situation has also negatively impacted De Boon and Meerkerk’s work at Fruitleather: «We were planning to go to Finland to give a presentation, and everything was canceled. We have orders in America, and they also reference this uncertain period, even if the packages should be shipped from European countries to America. One benefit is that we produce the material ourselves here in a workspace». There are few brands that already present alternatives to environmentally friendly food repurposing in the fashion industry. Fruitleather, in the meantime, sets the long-term objectives and goals to focus on beginning the production of key-organizers and wallets, to then offering bags and other accessories made from the fruit leather. While they are focusing on studying the mango as the primary fruit and source of leather production, there is a vision to include and experiment with other crops that would enlarge the assortment of materials and output variety. De Boon points out the duality of imposing sustainable responsibility on brands by suggesting that consumers should reconsider their values and priorities regarding purchases. Because of the aesthetics, most fruits also end up in line with rotten products due to natural spots on their surfaces suitable for sale but not desired by consumers. Fast fashion is driven by the demand that comes from consumers. This circularity can be slowed down through brands decreasing the number of new collections produced in a month to stay relevant with the seasonal flow of products.

Fruitleather is an online shop that provides leather like materials made from fruit- waste and also develops eco- friendly processes.