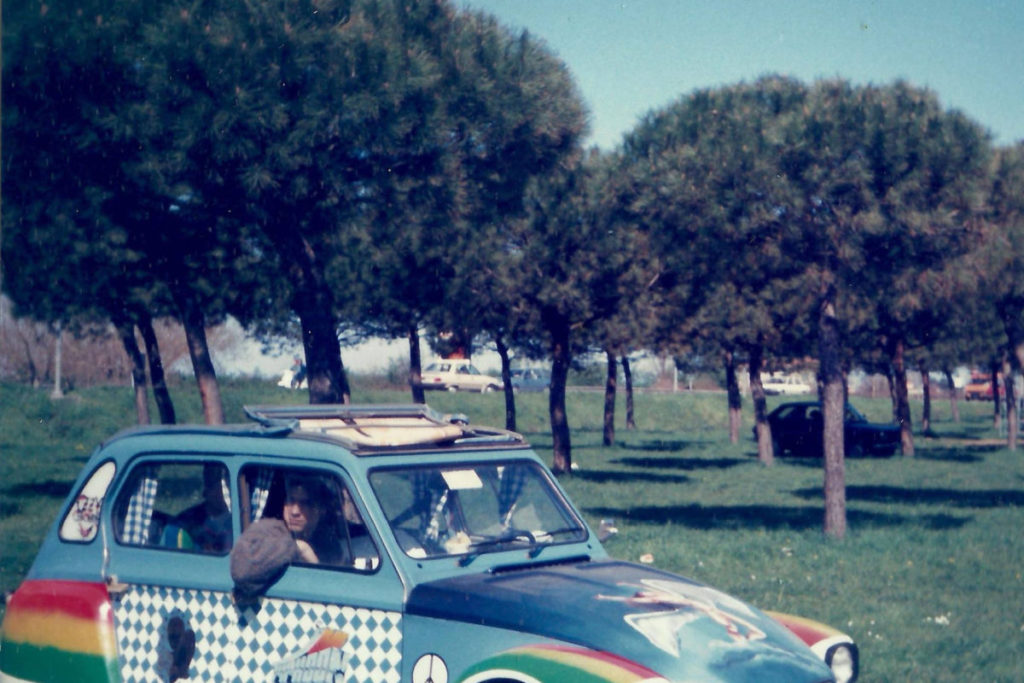 Vitelli – Sustainability is not buzz-word anymore, we need to be honest

A conversation with the founding duo at Vitelli: wools from landfills, the use of hand-machines and an old technique to create a new felted fabric

Using age-old techniques and upcycled yarn, Vitelli brand weaves the stories of the cosmic youth movement, born through the hippie post-punk scene in the Eighties in Northern Italy. Sustainability is no buzz-word here – each item in their new collection is made with upcycled wool from within a 30 mile radius from their studio.

MS: Vitelli was born originally after the meeting between me and Giulia. We were both already working on fashion as consultants. I am more related to art direction and creative work. Giulia was already working as a consultant for a knitwear brand on their development and design. We both come from the same region, Veneto, in the North-East of Italy. We wanted to go back to our roots on a product level, working only with knitwear, only through the involvement of our network of small independent mills Giulia was already in touch with. We thought that most of the Italian brands and creatives were not focusing on local Italian youth scenes or cultural environments from here. We started from a club scene that started between the end of 1979 and the beginning of 1980. It came from two places – our region and the region beside ours, Emilia-Romagna – so the whole area between the north Italian Riviera and Lake Garda. It first originated around one club called Cosmic – that’s where the name comes from for the movement. It moved around a bunch of other clubs that shared the afro-inspired, hippie sound. All the teens who gathered at these clubs had the same sense of style – hippie, American-inspired, mixed with post-punk British influences.

Knitwear is an old-fashioned technique to be modernized

GB: Our style is based on the upcycled yarn we are using and the technique we are using with it – combined with methods that have been around for decades in Italy. Machines are specified – that’s what suppliers told me when I first started doing knitwear. We can even use silver inside our yarn, which creates weird shapes because of the metal. Mauro pointed it out – we found an old technique to create felted fabric. We decided to use this technique not with fabric as it was supposed to be used, but with wool yarn. That is how we created the Doomboh collection – punching the upcycled yarn together and creating this ‘new’ fabric. It’s easy for us to be sustainable because the yarn we need is available everywhere. We can end up finding some yarn that is used somewhere else and take it and punch everything together to create this Missoni or LA-style look.

MS: The machine that Giulia is talking about, for felting – the embroiderer here in the middle of the countryside who had these machines wasn’t applying them enough. We found just a few kinds of scarves and old-lady accessories that he was creating with them. Although he was the first to build a machine like this, he never thought of making something as simple as a sweater. We aimed to elevate this new kind of fabric at a sartorial level and we made trousers, blazers, coats, shirts and used felted knitting yarn as if it was a textile. This is an example of what Giulia said – sometimes, it is more about the approach and the attitude we have to what we are making and what we can source.

Preserving artisanal styles rather than work on a mass scale

GB: Small artisans are also tired of doing the same thing their entire lives. When we crazy kids want to do something different, the artisans come to help us with their knowledge to create our vision.

MS: It’s not an easy process, approaching them. It takes some time because they have been fooled before. These people started in the Seventies and Nineties and were successful because they were working for the main fashion houses in Italy at a time when the ‘Made in Italy’ label was a brand in itself. Then from the late Nineties and especially the early Noughties the production was moved to eastern Europe or China or the Middle East and the Italian artisans started to lose money and jobs. After so many years working with demand, they didn’t expect that – so they didn’t have the culture that said ‘let’s promote ourselves, get a network and grow’. They found themselves almost unemployed and in crisis. Now that younger creatives like us are approaching them, they can be defensive at the beginning. When they understand that we appreciate and love what they do and we just want to work with them and not go anywhere else – they open up.

MS: The idea of sustainability is getting too filtered down – it’s becoming just another way of promoting brands. For some brands, it is a commitment. Since we have no trouble with the turn-over and volumes, we decided that we were going to try and be sustainable in every step of the process. We collect left-over woollen yarns – basically waste – from other knitters and use them in our production. It’s not recycled yarn or the vaguely defined ‘certified’ yarn – we only use what others don’t want. We use it because this yarn that is going to landfills – is one step we are taking towards sustainable creation. The collection is made in a 30-mile radius from our studio, which means that we have tried to be as carbon emission-free as possible. We work with suppliers who are all from the same town. These suppliers have operations with just a few machines and only a couple of trained employees who run all of the sampling and production. There is no plastic involved – not even in the packaging materials. The only pollution that we create is the fuel of the van to collect the yarn and the energy for the machines to work.

GB: I have seen how fashion is not sustainable. Maybe less so now, but I remember what it was like earlier, because I went inside the factories when there were no regulations in place. In the early Noughties, there was pollution and bad industry practices, where staff threw clothing away because of minor defects. It was a system that was bound to fail. When artisans and creatives work together as a community, it’s not just about the final product – it’s not a one-way relationship anymore.

MS: One more thing to note is that being sustainable can be a limiter. If you have to choose only sustainable materials and work with a slow production and take care of all of these different aspects, then you have to get rid and avoid certain techniques and wools. You sacrifice limitless creativity and stick to what you can do. We make sure that there shouldn’t be many try-outs and we don’t do multiple samples. We try to work like those organic restaurants who are farm-to-table. They have their own gardens and cultivate their own ingredients and make their dishes – it’s what we do too. We start by checking what we have available in terms of upcycled material, providers, machines. We don’t even try to source materials that we don’t have around us. It’s like a seasonal harvest.

MS: Every season, we do one main collection and one collaboration. Yesterday, we were thinking– what if we progressively make our collections a product of multiple collaborations? Each piece wouldn’t be done by one brand, but would be a result of the collective, a really communal effort. We are looking for new countries to work with on our collaborations for next season. For the last two seasons we have collaborated with New York brand Barragan, because we share a lot of similar approaches to styles, subcultures and tribal belonging. A part of the cosmic scene and the cosmic sound referenced Brazil back in the Eighties and we would like to touch on that in our own way. There is a warehouse that we have found with deadstock silks and an archive. We are going to use our techniques of embroidery, needle-punching and knitting on the silks – it’s going to be quite new for us. With Brazil, we are going to work on accessories that will be visual and tribal. With the Nigerian brand – if it happens, because it is still not confirmed – we will focus on the hand-machine knitting. It is a slow process, but it gives freedom, which is what Giulia is pushing us to do on hand-machines.

GB: It’s a way of understanding novel ways of using the machines. With hand-machines, even if the techniques are old-fashioned, they could create something newer than doing it with industrial machines.

MS: Design-wise, we are upcycling. A challenge now for upcoming brands like ours and for all of our peers is that you have to survive first but at the same time, we have to grow. It’s not about reselling to those ten stores – it’s about trying to make a business, and an organically growing business at that, all while telling your story and producing no waste. If you take a pattern of a coat that you made with thick needle-punched wool and instead, you work it with silks and embroidery trims – the same design object can end up with a different weight, fluidity and use. Clashes of patterns with unusual builds, techniques and yarns. We will make sure it has the usual exotic Eighties touch of Vitelli, but it will be as refined and crafted as possible.