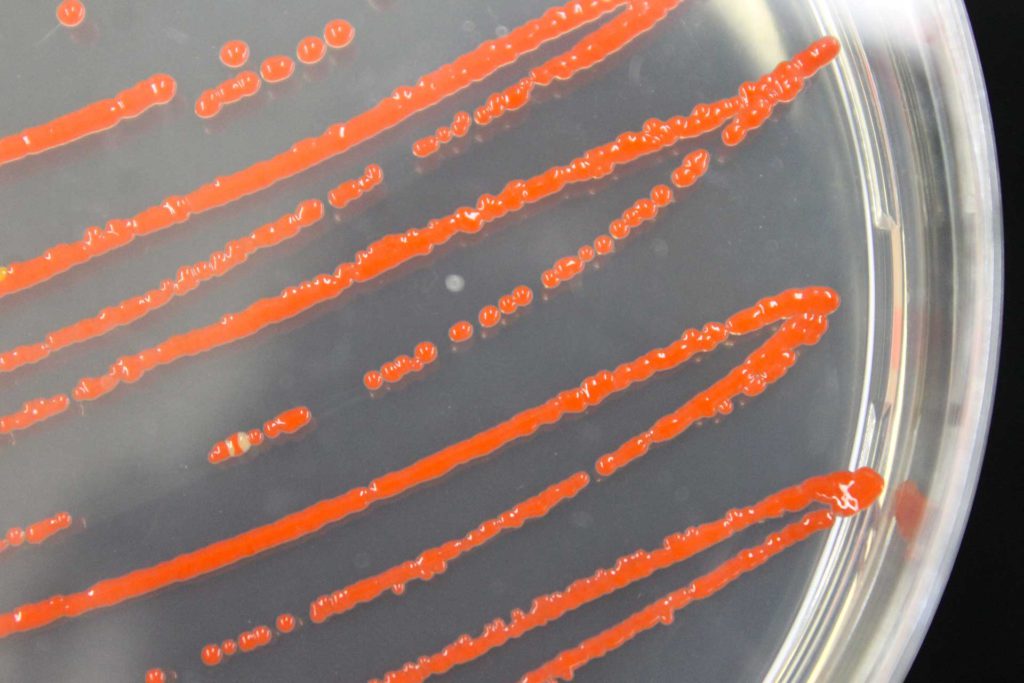 While the dyeing industry is looking for sustainable alternatives, Vienna Textile Lab is going to bring to the market a new dye made from bacteria

Lampoon reporting: the issue of the dyeing industry

One of the most polluting aspects of global fashion, devastating the environment and causing health hazards to humans. The impact of dyeing processes not only affects the environment, putting plants and animals at risk. It can also be hazardous for human health, impairing photosynthesis, inhibiting plant growth, entering the food chain, and promoting toxicity, mutagen and carcinogenicity.

The use of chemical dyes has compromised the environment, and the quality of water bodies since the majority of the water used during the process is returned to nature as toxic waste containing residual dyes and hazardous chemicals. To cope with this issue and limit the use of chemicals in the dyeing industry, Karin Fleck, founder and CEO at Vienna Textile Lab produces textile dyes using naturally occurring bacteria. Bacteria dyed textiles are derived from natural bacteria, making them 100% natural and free of hazardous chemicals.

Bacteria are identified and grown to extract colorants that are then purified into pigments. «We make organic colors made by naturally occurring bacteria to provide a sustainable, wholesome, and environmentally friendly alternative to conventional synthetic colors», explains Fleck. «We collect bacteria directly from nature, from flowers, feathers, or stones. We analyze them in our laboratory to identify them and make sure they aren’t pathogenic. Then, we isolate them and understand their affinity with different textiles, fibers, and yarns».

Using bacteria to brew dyes in the lab instead of resorting to petrochemicals has proved to be an environmentally friendly and resource-saving way to produce color, cut CO2 emissions, and skip expensive mixtures and substances like crude oil. «Bacteria can be stored as stems in laboratories and then anytime multiplied,» states Fleck. «All the processes companies do in their labs to make dyes, wasting energy and water, bacteria do in their cells, autonomously».

Colors derived from bacteria are a 100% natural biological product, explains Fleck. «During Vienna Textile Lab production processes, we don’t need any valuable raw materials, for example, crude oil, as it is usual in the production of synthetic colors», she continues. «These are just some of the benefits of bacterial color for our climate, our environment, and our health».

The usage of crude oil in the production of synthetic dyes is a pain point, both from the economic point of view and the sustainability one. Crude oil is a fossil fuel formed over time from prehistoric plants and organisms. The mixture of high temperatures and pressure helped transform into the oil. Being a non-renewable resource and releasing carbon dioxide gas into the atmosphere, causing a global warming effect when burned, make carbon oil a non environmentally friendly substance, contributing to pollution and climate change.

Apart from the sustainable side, another advantage linked to bacteria dyes is that they also provide a variety of colors, as Fleck explains: «collecting and analyzing so many bacteria we created a huge library of colors, all different from each other. Most bacteria do not produce dyes. And the functions of these dyes vary from one species to another. They are mainly involved in development, reproduction, and protection against external stress. Bacteria usually provide a specific color though, but some also make two colors or even a mix. Nature doesn’t make something that is 100% pure, as chemical processes do. Still, we are trying to be as replicable as possible with colors».

Compared to other natural dyes, like those extracted by plants, bacteria dyes have several advantages. While the production of vegetable and plant dyes is dependent on seasons, weather conditions, and geography, suitable bacterial strains are stored in laboratories. They can be reproduced and multiplied at any time.

How different kinds of fabrics respond to bacteria dyes

Talking about replicability and stability, another concern when it comes to experimental dyes is how different kinds of fabrics respond to bacteria dyes. «We are still exploring this point», says Fleck. «Textiles originating from plants and animals, as well as synthetic textile fibers, have been successfully dyed with our colors. Cotton, silk, wool, polyester are some commonly known examples, but dyeing of novel materials has also shown to be successful. Not only textiles can be dyed, but fibers and yarns as well, and we found that natural fibers work better».

Using bacteria dyes as an alternative to cope with the massive pollution chemical dyes are causing in productive districts like in China or Indonesia can seem a viable solution. Still, the process has first to become scalable, to meet the needs of the fashion industry. While the dye itself is biodegradable and organic since it is made with natural bacteria, the final product is not since some of the pigments need to be extracted from bacteria with the help of solvents. «What we are doing here is trying to give an alternative, producing less toxic colors, so that workers in dyeing processes are less exposed to chemicals and hazardous substances», explains Fleck.

Synthetic dyes are costly not only for the environment but to the health of consumers as well, not to mention the local communities. In many South-East Asian countries, textile mills pour dyes and chemicals into the nearby rivers and water sources, turning them unnatural shades of red and blue that, if ingested, constitute a danger for local populations. In China, reports say ninety percent of the local water is polluted, and, according to the World Bank, seventy-two toxic chemicals in the water supply are from the textile dyeing industry.

Indonesia’s scenery looks similar – hundreds of textile factories, pouring waste and chemicals into the water sources daily. For every pound of textiles produced, a pound of chemicals is broken down and later illegally bled into the river. This high concentration of dye, it’s linked to increased cancer rates, skin diseases, and slow mental development in children. Considering this situation, bacterial dyes can be an alternative to toxic textile dyes. The pigments some bacteria produce are organic and friendly to humans, animals, and the environment. The bacteria dye processes use no toxic chemicals, little water, low temperatures and along with other natural dyes, represents an opportunity for the textile industry to rethink its procedures, considering alternatives to synthetic dyes and polluting processes.