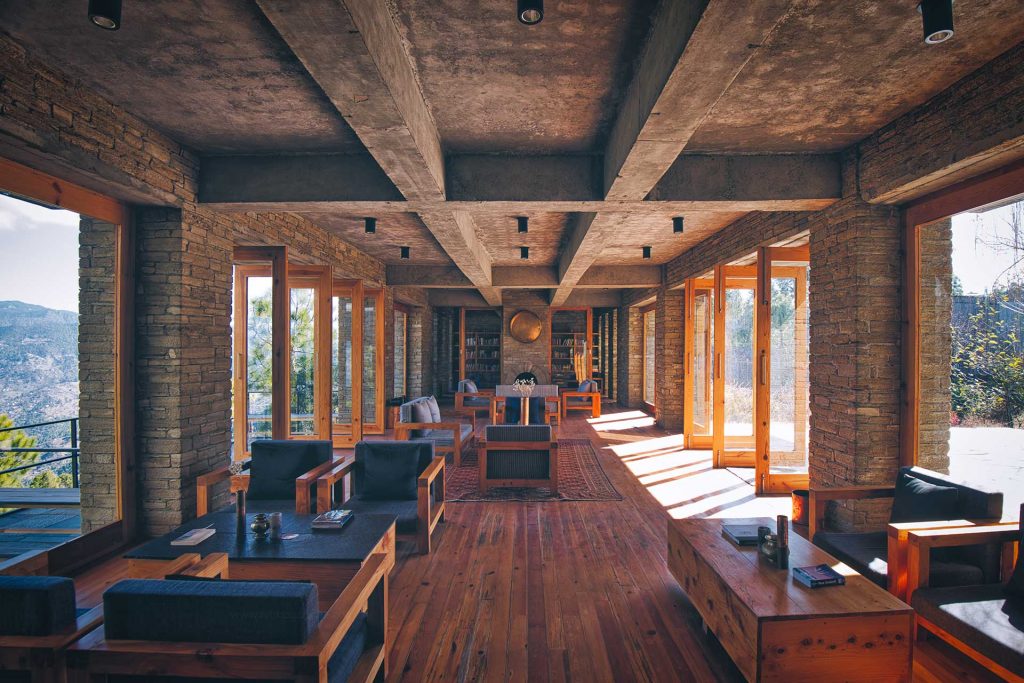 The Kumaon, Binsar. No power for machinery, it took six months to do a job that takes ten days

It was in the summer of the Sixties, when the poster children of the counterculture revolution, set foot in the mountains of Kasar Devi. From George Harrison, Bob Dylan, Cat Stevens to Swami Vivekanand D.H. Lawrence and Robert Thurman. Through the years, the ridge attracted musicians, writers, artists, spiritual leaders, and eccentrics from across the globe. A den for the creative luminaries, the Crank’s ridge, located on the way to Kasar Devi temple, got its name when Timothy Leary streaked on the ridge during the peak of the hippie movement. He suggested that Van Allen Belt above the ridge, gives the spot a cosmic energy, conducive for meditation and transcending experiences.

Perched at sixteen-hundred-meters above sea level in the hilltop village of Kasar Devi, The Kumaon is a boutique eco-tourism resort, surrounded by the Himalayan mountains. The property, seven hours on road from the capital, is situated by the city of Almora in the North Indian state of Uttarakhand. Named after the region, The Kumaon is spread across 2.5 acres. It was conceptualized by Vikrom Mathur and Raghav Priyadarshi in 2013. Born to immigrant parents in India, Priyadarshi completed his schooling in Geneva, Switzerland. Graduating in International Relations in the USA, he moved to England to pursue a masters in Finance. His interests started to shift towards emerging-markets, gravitating in the direction of his homeland in 2008. «I have been inclined towards the cultural aspects of my country», says Priyadarshi. Accidental hoteliers without a background in hospitality, Priyadarshi is an entrepreneur, while Mathur works in environmental policy. The partners met during a stint at Oxford over a decade ago. It was Mathur who first set his eyes on the location and asked Priyadarshi to invest in the property to acquire access over the area. The Kumaon’s view of the Himalayan peaks endeared the duo to take forward this project. «When we started construction at the site, we were put up in a run-down cottage on rent in the vicinity. Weeks later we learnt that the hut was gifted by Nehru to the Danish mystic Alfred Sorenson in 1934». What started as a conversation to build holiday homes, transformed into a commercial proposition. «Living and working in the city, we were weary of the time we were able to dedicate to the property. Considering the investments made, and the progress in vision, offering the space to people felt like an opportunity», says Priyadarshi.

Sri-Lankan architects, Pradeep Kodikara and Jineshi Samaraweera, of Colombo-based Zowa Architects, were hired to design the site. Their aesthetic draws from the works of Geoffrey Bawa, the architect who pioneered ‘tropical modernism’. Having built Mathur’s villa Kadju House in Sri-Lanka, they remained the first choice for the mountain abode. This was the first time the duo was taking forward a design brief in the mountains. «The idea was to bring tropical sensibilities to the mountains», says Priyadarshi. Their architecture is characterized by minimalism and the use of elements sourced from the region. While cinnamon bark clads the Sri Lankan property, The Kumaon’s cement structures are encased in bamboo, hand strung with copper wiring sourced from the neighborhood copper producing village of Tamta Mohalla. The vision of constructing a resort project on a mountain top came with challenges. «After the first visits, we realized there is no road that goes up to the property», says Priyadarshi. In the absence of an approach for vehicles, the building material was carried to the site by hand. There was no power for machinery. For the period of construction, the team worked with handymen, artisans and stonemasons from adjoining villages and communities. Fittings, furniture, and walls were chiseled by hand. «We were building the property like it would have been done five-hundred years ago. It took us six months to do a job that takes ten days», says Priyadarshi. The design iteration of the site was completed in eight months. From breaking ground to receiving their first guest, it took them two years and nine months. There are seven structures built at the site. The main unit comprises the lounge and a double-sided fire unit which differentiates the lounge from the library. The terrace of this unit opens into an open yoga and breakfast area. Adjoining this, sitting perpendicular above the lounge and library is a cantilever structure which makes for the kitchen and dining area. The lower structure is made of stone and cantilever of steel. «It was inspired by the iron bridges that go over rivers in the neighborhood village. Building it was a challenge from a civil engineering point of view», says Priyadarshi. The restaurant surrounded by floor-to-ceiling glass on three sides, facilitates a view of the Himalayan mountain range. Utilizing the contours of the landscape, the five chalets are built across terraces. «Since what we bought was agricultural land, we did not want to alter the topography. You don’t want to build over the site, you want to build on it. You cannot surpass nature», says Priyadarshi. The ten rooms of the resort are nestled in pairs, across the five chalets, which splits into two units with one room each. Every room includes a sit-out space and separate entry points. The footprint of the rooms remains while the materials change. The foundational level of the chalet is built out of stone quarried from the vicinity with walls of fly ash brick. The upper level is finished in cement render.

The region has a river system, eliminating mountain folds that result in unrestricted views. «You can see the mountain range and the peaks since the mountain ranges are not equal in height», says Priyadarshi. On a clear day, the guests catch sight of a panoramic view of the highest peaks of the Himalayan range: Nanda Devi (7,816 m), Trishul (7,120 m), and Chaukhamba (7,138 m) from the site. The resort offers tour itineraries around the ridge for their guests to experience the flora and fauna. Through the villages they witness rural life, architecture, and agriculture. The Binsar wildlife sanctuary is situated twelve kilometers from the property. Out of the twelve hundred bird species found in India, over six-hundred have been recorded in Binsar. «We strive for a balanced ecosystem at the property. We are planting native tree species so that birds visit», says Priyadarshi. Almora is home to an archaeological site; a series of stone temples built by the Chand Dynasty, rulers of this region in the Tenth century. The resort celebrates the narrative of its environment by hosting art shows and music concerts showcasing artists. The property’s dedication to preserve knowledge and ecosystems is exhibited in the culinary section. «We do not have something for everyone. We don’t abide by butler service», says Priyadarshi. The menu supports their farm-to-table supply chain and incorporates foraged foods such as nettle, cactus, fiddleheads, amaranth, and hemp that grows wild in the valley. Items from the menu include; chole (chickpeas curry), maadire ka bhaat (barnyard millet rice), cottage cheese cubes in spinach broth, bhang ki chutney (hemp seed relish), sabudane ki kheer (sago pudding), crispy okra salad, pahadi hara kadu (green pumpkin with carom seeds), red rice pudding with almond and saffron, chana dal (Bengal gram lentil curry), anar raita (yoghurt with pomegranate seeds), kathal pulao (basmati rice with jackfruit), pudina paratha (flatbread seasoned with dried mint leaves) and muduwe ki roti (flatbreads made with stone ground finger millet flour).

Sustainability is achieved by reducing the eco-footprint of Kumaon’s activities. By dispersing the structures clad with bamboo around the site, they were able to dissolve the visual impact a steel building can have in a forest environment. «Working in a rural setting, every part of construction is exponential in size. They reduced the visual weight of the construction to meld with the environment around it», says Priyadarshi. Situated in a water starved region, The Kumaon is equipped for rainwater harvesting with a drainage system that brings collected water from the roofs to a holding tank at the bottom of the site. They are vested in dark water recycling. «Our land is north facing. Solar energy evades us in this aspect», says Priyadarshi. Flora was planted to ensure that the site merges with the forest. In each room, the toilet walls are finished in ‘kadappah’ – a black stone cut into tiles. ‘Kota’, an Indian granite, was used for the floor of the terraces and balconies. The furniture and flooring are made of pinewood species procured from the forests. «Material cost leads to greenhouse gas emissions and contributes to pollution. We wanted to ensure that we keep the material idiom local», says Priyadarshi. The textile used to develop the server uniforms is procured from the fabric mills in the locality, and stitched in-house. A Himalayan sheepdog crossbred with Tibetan mastiff, is used by shepherds to ward-off leopards, that remain a hazard for the people of the village and their livestock. Kasar Devi is recognized as a spiritual center, when Swami Vivekananda came to meditate here in the 1890’s. Travelers and mystics have been visiting and have settled in this village. The writer D.H. Lawrence spent two summers at the home of American painter Earl Brewster, while Italian writer Tiziano Terzani spent years meditating and writing in a mountain hut. American writer and Buddhist scholar Robert Thurman came to Kasar Devi in the summer of 1971 to study under Lama Govinda. Courtesy of her father, Uma Thurman, spent part of her childhood here. It lured writers and spiritual seekers in the Twenties and Thirties, including western Tibetan Buddhists, W. Y. Evans-Wentz, and Lama Anagarika Govinda, who in turn was visited by Anandamayi Ma and Neem Karoli Baba.

Talking of the pandemic, the year gone by has affected The Kumaon. «With the capital we had, we could sustain ourselves and our workers», says Priyadarshi. In the last three months, this eco-tourism destination has received a record footfall «It could be the pent-up demand since the lockdown. Situated amidst the wilderness, being in contact with the elements of nature, with the ease of social distancing in the open, our property invites people looking for a spot away from the hustle of the city».