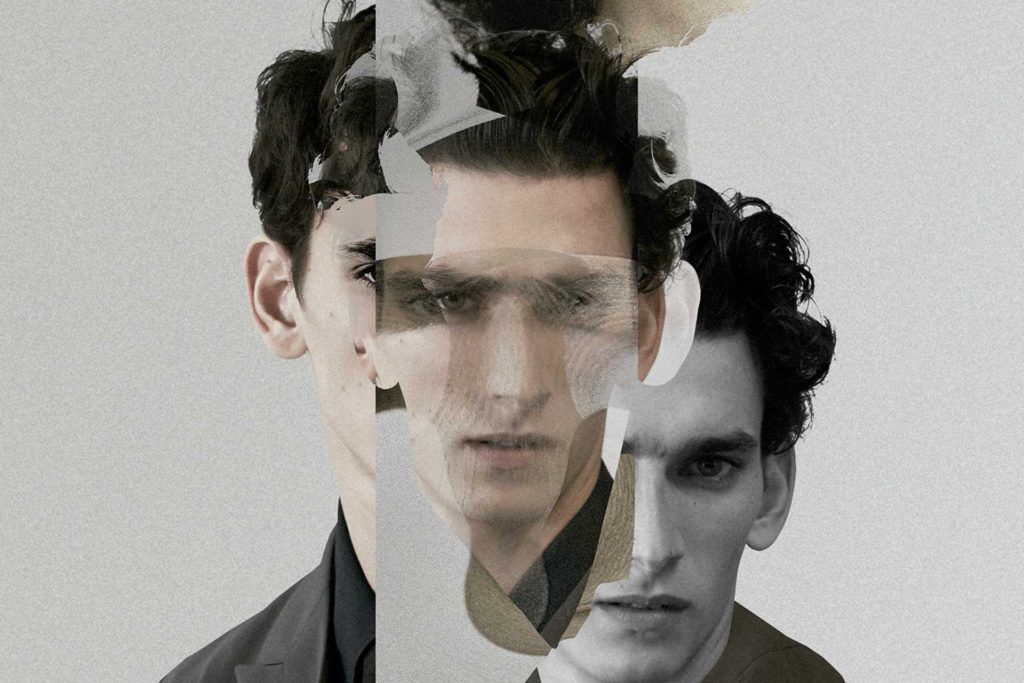 Cutting bodies and pasting parts: the art of Pablo Thecuadro

The wholeness of his artwork forms a jigsaw puzzle against a backdrop made of cutouts, the reflection of the Spanish artist as a collage artist

Pablo Thecuadro cut and distorted the face of Thibaud Charon, a model from Paris, from a photograph of Pablo Arroyo, a photographer based in Milan. In the digital artwork the Spanish artist created, Charon multiplies in three forms: the first displays a quarter of his left eye, his whole left ear, a portion of his hair, and the black undershirt and gray suit he has put on; the second focuses on the center – the features of his face appears on the screen – as a glass fogs up and covers his face, affording a view of his eyebrows that have scrunched and his lips that have parted; and the last, stationed on the right, demonstrates Charon’s head that hangs in the air – his nose, two lips, right eye and ear, and a portion of his hair complement with the first imagery on the left, forming the puzzle piece it misses. The wholeness of the artwork forms a jigsaw puzzle against a backdrop made of cement, the reflection of Thecuadro as a collage artist and the signature he has established since he birthed his style.

Role of duality in human experience

Thecuadro envisions the duality of human beings: the psyche of who one yearns to become versus the person they practice today and a part of themselves they have decided to expose to the public. Scott Trettenero, the author of Master the Mystery of Human Nature: Resolving the Conflict of Opposing Values, writes the essence of duality in one’s life is to grapple with the depth of understanding of their life. Without recognizing duality, Trettenero says that one loses a tool to access the teachings of such a concept, which balances the interaction of opposites and forces that compete. Yet these forces move beyond as opposites since they complement rather than cancel out each other. According to the author, they fall in sync resembling the flail of a bird’s wings. He continues writing about the duality of life and death that «with the concept of duality, it is said that you cannot understand one side of the dual nature of something without comparing and understanding the opposing side. For example, you could not understand what the concept of ‘up’ is without having a ‘down’ to compare and contrast to. Same applies for in-out, hot-cold, sweet-sour, young-old, male-female, liberal-conservative, and on and on, the list goes. If we do not have an opposing counterpart, then it cannot have any value to us».

In perceiving duality, Thecuadro has updated his codes. «Maybe it is no longer duality as I have said before, but it grazes on the layers of our personality. Sometimes, the necessity in life to protect oneself rages on, but they have to tread lightly to avoid losing themselves in the process. As an introvert, it takes time for me to become comfortable around people. I like to use the negative space in my work to reflect that hidden part – it may comprise nothing, but a part of me lives there, which shapes the wholeness of the composition». In art, negative space underlines the space around and between the subject of the image while the object or subject of the image takes up the positive space. Through the awareness of the shape negative space creates, the accuracy of the illustration heightens as the artist notices where to compose the images. The negative space, where a part of Thecuadro resides, helms his curation process when he picks up the beginning of his art. In making his collages, Thecuadro devises his method when he starts his creation. «I find pictures in a magazine which I like, and I think of how I can make a theme with them. Once I build the flow of the images – how they function on the canvas and where they will position – I patch them together to hope for seamlessness in imagery. Finishing the artwork sometimes poses a challenge, but I try to stop when I feel that I have got a composition that balances itself out».

How to make a collage

His Handmade Artwork compendium, a collaboration with photographers as his source of images, mirrors how he halts as soon as the composition evens out. In a photography shot by Zeb Daemen, a photographer based in Antwerp, Thecuadro places the sliced portion of the subject’s face as the foreground – the sides create waves as patterns – to carve a path for a model on the right whose face, neck, and upper body complement with the face on the center. Behind them, a person shows their back, away from the lens, and strands of their hair that double as cardboard in the palette of wood which breaks the monochromaticity of the imagery. In a photo shot by Isaac Anthony, a photographer based in New York City, the subject’s face turns sideways and hovers in the air without his hair. The left side of his cheeks forms the hilt of a knife. In his backdrop, a person – perhaps the same subject – turns his body away from the lens to display his band-aid on his left shoulder, but glances back at the camera as he tilts his head. His hair grows back, but Thecuadro removes his eyes and nose as he plasters cutouts of skin and textiles. While the artist once said that creating collages and the process never end, he avoids grandeur. «In terms of forming the collages, I can always put another picture, or cut more portraits from my sources and place them in some parts of the collage, but I try to make the final piece as simple as possible to escalate the impact». Such simplicity looms in a photograph shot of Yuka Mannami by Jack Waterlot, a photographer based in New York City. As Mannami poses before the camera, her left eye turns somber as she parts her lips and her hair and bangs sway as they enclave her face. Thecuadro chisels the right portion of her face and crams a part of the model’s face – the right portion of her face in another photograph – to fill the space.

Hideaki Anno directed and wrote Neon Genesis Evangelion, a Japanese anime series created by Gainax and began in October 1995, he picked such a title for the way the word Evangelion sounded. The series: « Revolves around the organization NERV, using large mechas called Evangelions to combat monstrous beings called Angels. They are piloted by several of the main characters, including Shinji Ikari, Asuka Sohryu, and Rei Ayanami. While the initial episodes focus largely on religious symbols and specific references to the Bible, the later episodes tend to go deeper into the psyches of the characters, where it is learned that many of them have deep-seated emotional and mental issues. Through the exploration of these issues, the show begins to question reality and the existences therein. Much of the series’ content was based on Hideaki Anno’s own clinical depression». In one of the scenes of the series, the one Thecuadro sent Lampoon to invoke his well of influences, a character positions before a red backdrop – his face, eyes, hair, nose, lips, ears, neck, collar bone, and shirt made of pencil – and looks at the viewers, but his face and neck blur as another image of a character, facing away from the audience and with blue hair, overlaps with the first character. One of them mutters the line « the real you will cease to exist». After uttering those words, the view transitions into a character – while still inside the face, neck, and perimeters of the first character – wearing a beige polo shirt under a forest green jumpsuit with V straps and that ends in a skirt, exiting towards the open door.  As Thecuadro tells Lampoon, «I draw my influences in collage art from manga, anime, and video games. Sometimes, it does not resemble them, but I search for the compositions in them, the nuances of my art reflecting. My favorite reference is Evangelion, and I attempt to make my viewer feel and embrace the same sensation I feel whenever I enjoy these aesthetics». The artist reflects on his beginnings, and how he arrived at the style he exudes today. «I was in my final year in Artistic Photography when I had to complete a project as my final task before graduation. In this work, I had to incorporate all the references that I had studied and demonstrate them to the panel. I thought about showcasing my collage techniques, an idea I had after I had been to the workshop of Susana Blasco, one of my collage icons. I had been illustrating since I was young, and I had in mind that I would land in the art industry and create art. I first studied illustration and photography before transitioning to collage, a move that felt natural to me since in my illustration and photography degree, I learned a lot about composition, and this has helped me make collages. As I have mentioned before, composition is the common factor in the three areas and techniques that I have dabbled into». In a photograph shot by David Ferrua, a photographer from Paris, Thecuadro strikes at minimalism and the equilibrium in composition as he changes the outfit of Tanya Churbanova by cropping her eyes from another picture and pasting it on the canvas to act as her suit and pants. Grayscale pops up as the color and the outlines of the outfit underlines the signature of Pablo Thecuadro, the testament to his doctrine to compositions, simplicity, and Neon Genesis Evangelion.

Born in Zaragoza, Spain in 1992, Pablo Thecuadro uses fashion editorials and images taken by other photographers to create collages both as digital and handmade artworks. The Spanish artist aims to express his vision of duality in each artwork he creates and believes that the art of collage-making is a never-ending process.