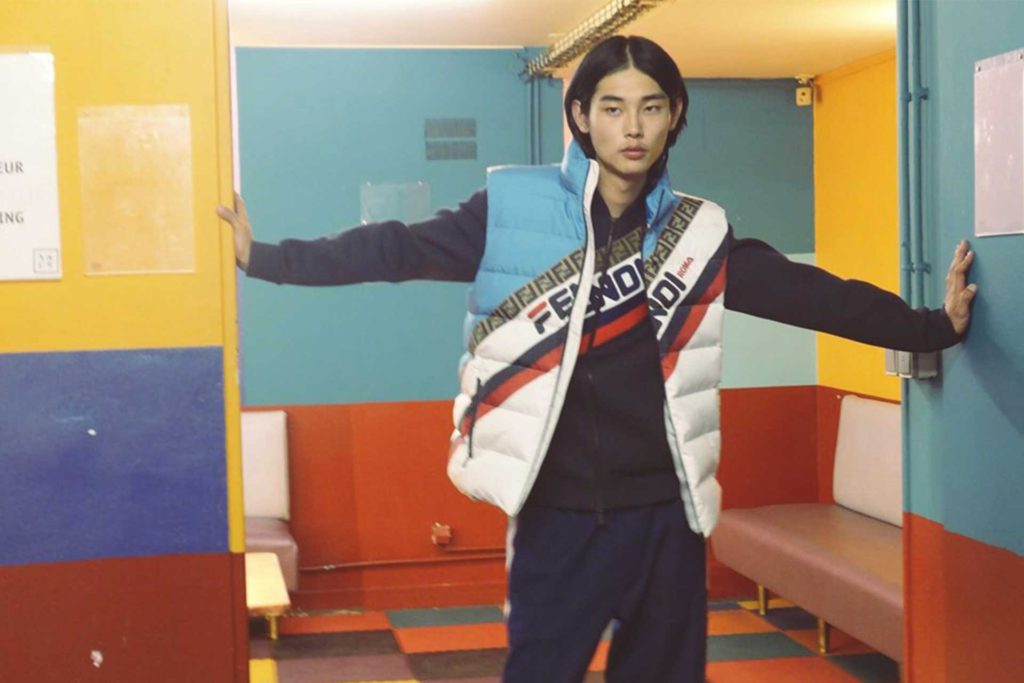 Even if you wear it wrong, you’re wearing it right: Y/Project X Fila – Glen Martens

The late Moroccan designer Yohan Serfaty launched the Y/Project atelier in 2013 and three years later, Belgian Glenn Martens inherited the house in North-West Paris. Martens developed brand signatures including extravagant silhouettes and sexy unisex tailoring, without an air of pretentiousness. With twenty people on his design team, the designer relies on external accessories crafters and ensures his one rule is known by all; there are no rules. Non-intent on changing the industry or making a statement, Martens prefers to see the lighter side of fashion, creating designs from mistakes and allowing the wearer to decide how the garment should be worn. He implies this responsibility in his latest collaboration with Fila, in the form of twisted necklines with multiple silhouette options- even if you wear it wrong, you’re wearing it right. Martens has been awarded for his thought-provoking dressmaking, including Designer of the Year at the Belgian Fashion Awards, previously won by Dries Van Noten. Since the beginning of his career under a decade ago, he has landed on the luxury ladder and gained commercial success with over 150 stockists. The brand has never been one to live up to any hype, focusing on their own craftsmanship and authenticity. With a pandemic in full force, the brand took a hit with twenty-five percent of customers cancelling their womenswear orders, yet the team managed to create an acclaimed collection for the most recent menswear season.

For their 110th anniversary, Italian sportswear brand Fila collaborated with Y/Project to produce their most playful collection yet, with seventy-five looks of logomania and DIY silhouettes. Fila’s fashion history lies in quality underwear and knitwear, designed to be worn by those living in the Italian Alps. The first sportswear designs were unveiled in 1973 and grew in popularity after its endorsement deal with tennis player Bjorn Borg a few years later. This was the first in their partnerships with big sports names, going on to partner with basketball’s Grant Hill and Chriss Webber in the 1990’s. Fila has become one of the industry’s most reliable sportswear brands, and its success relies on its balance between sports and the streets. In this collaboration, Martens took heritage Fila staples and distorted their normality. Double collars were in play, poppers were in abundance and there were enough layers to keep those in the Italian Alps cosy. It could be said that Fila has had a ‘comeback’ in recent years after a downfall during the 2000’s. In 2017, the sportwear brand collaborated with Pink Dolphin Clothing and the whole collection sold out in stores immediately, marking the return of the brand to the streets. Their most unexpected collaboration came in 2018 when the brand seen sold in high-street sports stores paired with Fendi and was named ‘Fendi Mania’, based on its excess of logomania. This fusion of a high-end and high-street brand was a success and has given athleisure brand a new customer range. This season, Martens took Fila and made it his own, making sure each piece was versatile enough to be worn in multiple ways, at the decision of the wearer. Though conceptuality can be mistaken for pretence, this could not be more opposite. The shapes are playful yet complex, reflecting Martens’ emphasis on reality and everyday life.

The collaboration was livestreamed on Instagram. Opening the show was a Y/Project trademark, a complex collar. The ropes extending from the oversized cream cable knit give the wearer multiple options for a neck hole, completely altering how the garment could drape. Following this came more signatures: oversized tailoring and hyper feminine and masculine pieces. Never a miss are enormous earrings, in particular a gold gilded abstract pair amongst a sea of Y earrings in a new, even bigger size. Notable Fila classics include footwear, windbreakers, t-shirts, and sweaters, seamlessly merged with Y/Project’s staple accessories from the Heart Lobster Patent Pump to the Accordion Baguette. This fifteen-look capsule collection has transformed the codes of the house: double layered denim is now a pair of trackpants, and the co-branding is never hard to find, whereas branding in the rest of the collection is nowhere to be seen. In 2016, Y/Project first presented denim chaps, in an attempt to show what was possible for the brand. This became a trademark and is subtly referenced in this collection as seen in a pair of indigo denim jeans with an added panel made to look like thigh-high cowboy boots, finished with a Classis Y Belt. Elegant is the word for this collection, with an edge of flamboyance and an abundance of craftsmanship. Martens is known to make historical nods towards the romantic, medieval architectural buildings of Bruges and his historical influences do not stop there, with a recent collaboration with Brazilian rubber shoe brand Melissa. The pairing references embellished Victorian vases and British porcelain vases that were often shaped like shoes. The Melissa Point Mules are featured in the collection, as seen styled with colourful tights or worn to compliment lavender velvet. A new design of the rubber shoe is shown, this time with a large, embellished flower on the pointed toe, resembling the flower shaped seen dangling from the ears of the models.

Martens is part of a new wave of designers leading streetwear, making the conceptual fun and the fun forward-thinking. The designer looks towards metropolis for inspiration and tells his Instagram followers in a video that he finds crowded neighbourhoods the most inspiring, from New York to London. He explains that the metro is a breeding ground for diversity. He looks to people’s attitudes and how they correlate to their outfit because fashion to him is about feeling and celebrating your existence. He emphasises how his up brining in Bruges left him with an innate taste for gothic architecture and reflects the vertical elegant lines in his designs in partnership with his streetwear elements. Newly appointed as Diesel’s creative director in October 2020, Martens is not only heading two brands but reinventing them. He has extended Y/Project to a womenswear brand and in the space of eight years has made the womenswear as popular as the menswear. For this collection he looked back on his own memories of Fila and its place in the music scene over twenty years ago, worn to Belgian gabba and techno raves, about which time he would have been working on his degree in interior architecture. He then applied to the Royal Academy of Fine Arts in Antwerp and ended up graduating his class first. This educational success led him to his role at Jean Paul Gaultier as a junior designer, and then on to produce his namesake label, comprising of architectural cuts and versatile comfort, which ran for three seasons. He later landed the role of assistant to Yohan Serfaty and took over from him after his passing, continuing to lead the brand today. Since then, Martens has achieved a combination of both his and Serfaty’s wishes for the brand, using the original codes and intertwining them with his ideas. The original dark and moody niche was owed to inspirations of the brand, Rick Owens and Ann Demulemeester, but Martens knew he needed to change direction and make it his own. Himself, his stylist, and photographer became a trio establishing a visual identity for Y/Project, travelling the world via Instagram pages to find their latest inspiration.

The Paris based label appointed creative director Glenn Martens in 2013 and since then has fused the designer’s muses of street fashion and gothic architectural design. In 2017, the luxury brand won the ANDAM Grand Prize and in the same year, Martens was selected as one of the Business of Fashion’s 500 people shaping fashion globally today.