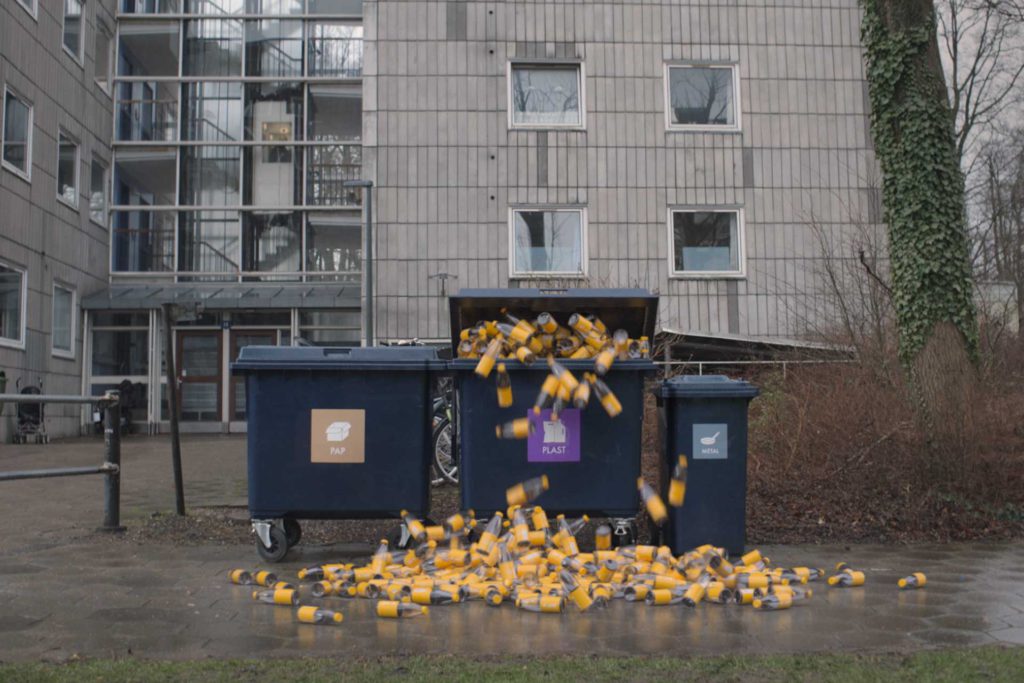 Municipal waste and the relation with public health and environment

A term that defines the various typologies of waste collected and treated by or for municipalities. Municipal waste includes the solid waste generated by households, commerce and trade, office buildings, institutions, and local businesses. The waste coming from street cleaning, sea and lake beaches, and river banks falls under this definition. In addition to municipal solid waste (MSW), municipalities generate waste through construction and demolition activities and the municipal sewage network and treatment system. If collected, disposed and stored in an incorrect manner, waste imperils public health and the environment (Yoada, Chirawurah, Adongo, 2014). In 2021, seventy-five percent of the European population lived in urban areas. This percentage is expected to rise, reaching eighty percent in 2050. As part of an urbanized continent, European national and local admirals have to resolve the challenges linked to urban waste and its generation and management to improve liveability and ensure a decent quality of life for their residents.

This is not a modern phenomenon; as urban populations have been concerned with urban salubrity since the preindustrial era. The organized sewer and drainage systems operated by the Minoans in Crete and Harappans in the Indus valley date back to circa 3000 BC (De Feo et al., 2014). The Romans had an intricate sewerage system. The construction of the Cloaca Maxima, one of the earliest sewage systems in Europe, began around 600 BC, and its expansions took place in the following centuries (Havlíček, Morcinek, 2016). Literary evidence that includes the work of Juvenalis, Suetonius, Martialis, and Petronius suggests that the ancient Romans faced public sanitation issues. Miasma theory is an obsolete medical theory inspired by a hypothesis voiced by Hippocrates in the fourth century BC that identified the emanations from decomposing carcasses and vegetation, molds and dust particles, the so-called ‘bad air’, as the cause behind diseases such as cholera and malaria. In the first half of the 19th century, Miasma theory’s popularity, cholera outbreaks, and the unsanitary living conditions in industrialized cities in Britain, reported in 1842 by Edwin Chadwick in its The Sanitary Condition of the Labouring Population, brought on the implementation of new policies, management techniques, and acts. The Nuisance Removal and Disease Prevention Act of 1846 and the Public Health Act of 1875 were intended to improve the unsatisfactory collection and discharge of urban waste and mitigate urban dirtiness.

According to Eurostat data, on average in 2019, 502 kg of municipal waste per capita were generated in the EU, with Romania generating 208 kg of municipal waste per capita and Denmark producing 844 kg of municipal waste per capita. Municipal waste constitutes about ten percent of the total waste generated in Europe, with households producing the majority of it. If unmanaged or mismanaged, waste can threaten fauna and ecosystems and contribute to environmental issues such as climate change, soil contamination, and air pollution. Landfills, sites where disposable materials are sent, can release hazardous substances into the soil, surface, and groundwater, impacting ecosystems, humans, and animals as these compounds can affect the water quality and can cause the contamination of food chains. Landfills can release methane, a greenhouse gas culpable for about thirty percent of the warming happening since the preindustrial era. Landfills and wastewater generate around twenty percent of the global anthropogenic methane emissions. Part of these emissions are released when biodegradable MSW begins to decompose in anaerobic conditions, as the bacteria responsible for decomposing the waste generate methane. The United Nations (UN) report Global Methane Assessment: Benefits and Costs of Mitigating Methane Emissions, released in May 2021, stated that cutting the methane emissions caused by human activities by forty-five percent during this decade can prevent 255 000 premature deaths, 775 000 asthma-related hospital visits and twenty-six million tonnes of crop losses.

The practice of recycling diverts waste from landfills and offers a plethora of environmental benefits. Recycling conserves resources since when used materials are utilized to manufacture new products, the need to employ natural resources as raw materials decreases which is beneficial for natural habitats and ecosystems. The extraction of raw materials through logging, mining, and quarrying and their refining and processing generate greenhouse gas emissions. Source-segregated materials recycling can result in GHG savings, with savings coming from recycling LDPE, PET, textiles, steel cans, and aluminium cans. Between 1995 and 2019, the total amount of municipal waste generated in the EU grew, and the amount of landfilled municipal waste decreased, falling from 121 million tonnes in 1995 to fifty-three million tonnes in 2019. Between 1995 and 2019, the share of recycled municipal waste rose from nineteen percent to forty-eight percent at an average annual rate of four-point-three percent. In 1995 the amount of waste recycled amounted to thirty-seven million tonnes with eighty-seven kilograms per capita, and in 2019, the recycled waste came to 107 million tonnes with 239 kilograms per capita. The Covid-19 pandemic had various effects on societies, which included an increase in the use of personal protection equipment such as masks and gloves. Due to the pandemic, imports of face masks into the EU have increased by more than double compared with the business-as-usual level (BAU) before the Covid-19, and the imports of single-use gloves rose by eighty percent, reaching a total of 105 000 tons. A survey conducted by the American management consulting firm McKinsey & Company among recyclers in April 2020 highlighted that eighty percent of those interviewed felt affected by the pandemic to varying degrees. Sixty percent of the respondents affirmed that business slowed because of Covid-19 but was not jeopardized in the long run, and sixty-seven percent think their business will recuperate in the medium term. Thirty-three percent of the interviewed recyclers felt like their business was stalled or endangered by the crisis. The pandemic may have changed some consumer habits, which affected the recycling and deposit systems. «Coronavirus has left its mark on Danish society. While cafes and restaurants had to close and borders were shut down, the Danes consumed their beverages at their homes and terraces. This can be seen in the number of deposited bottles and cans, as it broke all records and grew by almost a fifth in 2020, reaching one-seven billion». Said Lars Krejberg Petersen, the CEO of Dansk Retursystem, the privately owned, non-profit company with the right to operate the Danish return system. Denmark has one of the world’s most efficient return systems with a ninety-two percent return rate.

Bio-waste is the biodegradable waste generated by gardens and parks, households, restaurants, caterers, and retail premises. The Food and Agriculture Organization of the United Nations (FAO) estimates that, around the world, one-third of the food produced for human consumption is lost or dissipated, amounting to around one-point-three billion tonnes per year. In 2012, the market value of lost and wasted food was $936 billion. Across the globe, both food loss and food waste prevent food from reaching the table. Food waste alone generates around 4.4 GtCO2 Eq, eight percent of global greenhouse gas emissions (FAO, 2015). In the EU, about eighty-eight million tonnes of food waste are generated each year, with related costs estimated at 143 billion euros (FUSIONS, 2016). In the report Bio-waste in Europe — turning challenges into opportunities, the EEA stated that organic waste accounts for more than thirty-four percent of municipal solid waste in Europe. To increase biowaste recycling, the Decisive project coordinated by the Institut National de Recherche pour L’agriculture, L’alimentation et L’environnement in Paris and funded by the European Union’s Horizon 2020 research and innovation program, has been developing and demonstrating solutions for waste operators and public services consisting of micro-scale anaerobic digestion units and the development of a Solid-State Fermentation (SSF) process. A carbon credit is a tradable certificate representing the avoidance, reduction, or sequestration of one metric tonne of carbon dioxide or greenhouse gas equivalent. Companies and individuals buy these credits in the voluntary carbon marketplace. In compliance offset markets, regulated entities purchase offsets to comply with a regulatory act. In June 2021, there were 1012 projects tackling waste handling and disposal in the Clean Development Mechanism, United Nations’ carbon offset scheme. Both scholars and NGOs like Carbon Market Watch and Friends of the Earth have expressed their reservations about relying on carbon offsets to meet climate targets. Data shared in the 2016 report How additional is the Clean Development Mechanism? by the Öko-Institut e.V. suggest that eighty-five percent of the projects they analyzed have a low likelihood to provide additional emission reductions. Scholars have highlighted how carbon trading has rewarded major polluters and how its logic of buying one’s way out of their historic responsibilities is unacceptable under the Paris Agreement, given the Global North’s responsibility to mitigate its emissions.

Since 2002, Dansk Retursystem has been operating the Danish deposit system.

Has been the CEO of Dansk Retursystem since 2014.