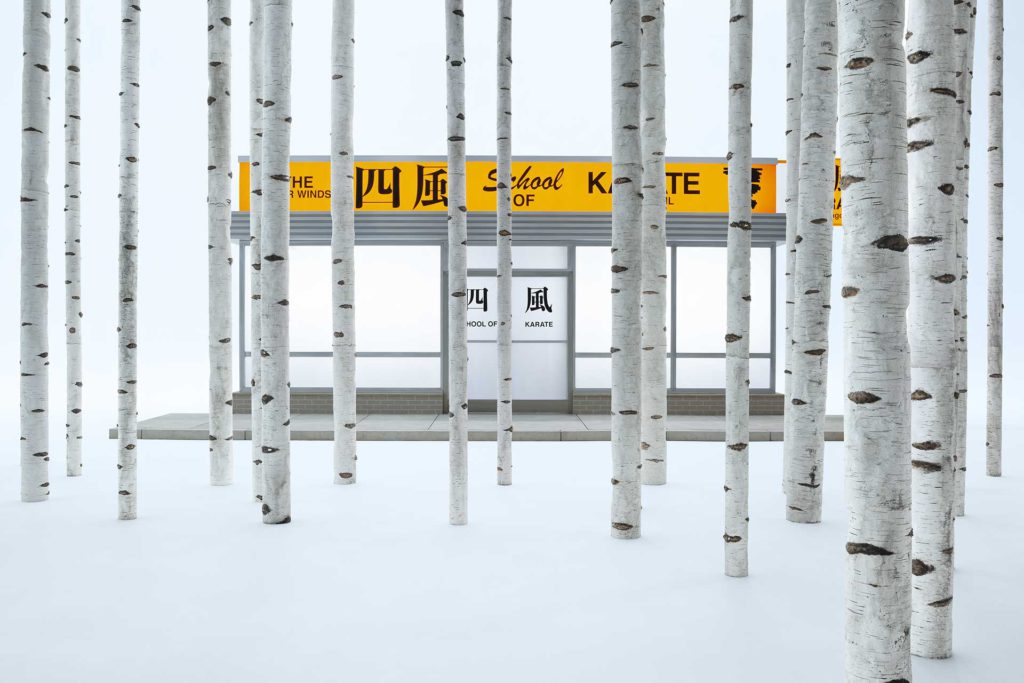 Amen Break. A digital film by Mahfuz Sultan unveiled Virgil Abloh’s menswear language, the partnership with Nike and the influence of martial arts

Paris, 24th June. It’s been over three years since American designer Virgil Abloh was appointed artistic director for Louis Vuitton Menswear. Finding the heritage and creative integrity of the French house as key inspirations, he aimed at looking to reference them, while drawing parallels to modern times. The Spring Summer 2022 collection was showcased in a film titles Amen break. Directed by Mahfuz Sultan, it featured Goldie, Saul Williams, Issa Perica, Caleb Femi, JIM JOE, Kandis Williams, Thelma Buabeng, Octavia Burgel, Lupe Fiasco, Julian Eugene Tsukasa Williams, Damian Eugene Nagisa Williams, Shabaka Hutchings and Malik Le Nost, alongside a broad cast of talent. The collection was named after the most frequently used drum sample of the 1969 soul song Amen, Brother by the American band The Winstons. In the fourty-seven-page document that accompanied the digital show, the creative director detailed the cultural relevance that the drum solo had in contemporary music, as it was sampled, reinterpreted, and remixed by a host of other genres of music. The moving pictures explore and celebrate the diversity of cultures, recontextualizing them as to exemplifying the artistic instinct of examining a core design, in order to create different interpretations. Abloh’s intent was conveyed through a play on the juxtaposition between formal and street, with influences coming from hip-hop, martial arts and chess. Archetypes and subcultures are highlighted and interpreted in term of their cultural evolution or regression – a fluid transition, the act of passing something from one person to another, activating waves of change across generations. This idea of transmission impacts the lives of others. As a synopsis, The Amen Break’s narrative tells the story of a father and son who face loss, the challenges and supporting heroes met during a quest to deliver a message that guides the child through adversity. The film reflects on a historic moment in Black art and culture. It is an abstract interpretation of the story of Lupe Fiasco, the American fine artist and rapper, who grew up on the Southside of Chicago amid the gang turbulence of the ‘70s and 80’s. Fiasco’s father – an African drummer and member of the Black Panther Party – was intentioned to offer another way out for young people in the area. He organized martial arts as a solution to the problem, impacting on a generation of kids with ideas of empowerment as to neutralize prototypal preconceptions. Japanese martial arts and cinematography inspired the aesthetics of the digital show, with them being key elements in rapper GZA, who also appears in the film and Wu-Tang Clan’s works.

Through dialogue and juxtapositions, the collection presents the graphics of chess informing various motifs, while the physical form of the game manifests in shapes trough hats, skirts and gloves. In a fusion of genders, Abloh’s design merged archetypal women’s silhouettes with traditional men’s garments, in a transition which links his design with the subcultural expressions of empowerment and strength; tracksuits, in particular, were positioned as an essential, blurring the lines. The director took chess as his starting point as it relates to life- a game of opposition, two entities that battle in a strategic way. This philosophy is aligned to Abloh’s exploration of juxtapositions that inspire the contrast between the silhouettes elongated by billowing bottoms and its classical suiting, as well as the bright colors and the sober blacks and greys. The collection included skirts – from kilts to detachable pleated skirts to full tiered ones. By hybridizing their properties, the creative director recodes the human preconceptions tied to the pieces. «We live in a time of extreme polarity» explained the designer «I’m laying the parameters of polar opposites and making safe space for dialogue to happen between». The opposition between formal and streetwear includes ready to wear pieces featuring airbrushing on hand -painted T-shirts and monogram leather pieces, crochet, and check motifs. There is a strong showing of accessories as well. Abloh and stylist, Ibrahim Kamara accessorized almost every look with baseball caps with embroideries and visors, berets pinned with flags and giant fuzzy inspired by the shapes of chess figures. The digital show displayed a variety of belt buckles, animal shaped claps in hand- enameled metal, hockey gloves as well as soccer socks and sunglasses that are still an element of rave culture. 3D bags in crocodile leather airbrushed with soundwaves are part of the show along with glitter bags and padded fish-shaped bags in multicolor padded leather. The collection saw collaborations with Meralheadz and visual artist Jim Joe across ready to wear pieces and bags. A wide array of footwear – from Chelsea boots with neon contrast-soles to Air Force 1 trainers created in collaboration with Nike were also displayed. They have been reworked with Louis Vuitton’s logo and materials in an array of combinations and permutations. Alongside the trainers, a sneaker truck in the house monogram calf leather and a white Nike swoosh is also part of the collection.

Louis Vuitton’s sustainability and the partnership with UNICEF

In line with the themes of positive change for future generations, central to the Spring Summer 2022 collection, Abloh integrated a number of sustainable measures. He included the employment of-redyed over-stock fabrics, cradle to cradle wool, as well as certified materials such as cotton sourced from organic agriculture, or wool sourced from responsible farming. Washed canvas bags and ready to wear workwear used responsible fabrics, sustainable material, and lining. Virgil Abloh has been an ambassador for sustainability, trying to make ethical choices in the manufacturing of his clothing. The designer and Louis Vuitton have unveiled the Felt Line, which first made its debut during the Maison’s Fall/Winter 2021 show. The capsule showcased Louis Vuitton’s commitment to circularity. Featuring organic cotton, recycled wool-based jacquard and polyester taken from existing stocks and chain from plastic, the Felt Line bags offered a different interpretation of Louis Vuitton classics. The label’s main focus areas today are the traceability of origin and an in-depth knowledge of the supply chains of the materials, farming and trapping conditions with the aim of continuing to implement stringent certifications in animal welfare. Abloh’s social commitment to promote diversity and inclusion, made him expand his partnership with Unicef, which includes – among others – the Reimage Education and Generation Unlimited initiatives in Ghana. The designer is devoted to making a personal contribution to help accelerate results for children in Ghana: an ambition to inspire African youth to develop creative projects, linking African art and culture to the markets, while crating awareness of the Black canon.

A history of recontextualization. Since his debut as artistic director at Louis Vuitton in 2018, Virgil Abloh played in a game of oppositions, hybridizing garments while giving new interpretations of the same. For his Spring Summer 2022 collection, the designer remixes old and familiar, formal and streetwear with the influence of martial art and hip-hop.