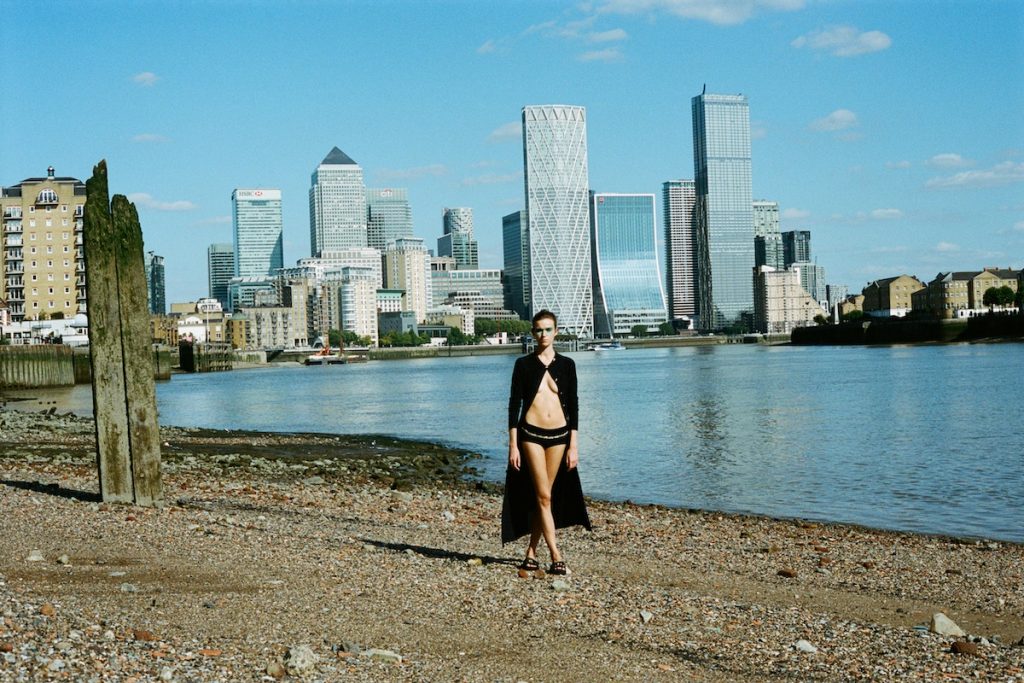 An interpersonal fascination between Martin Margiela and multidisciplinary artist Jonathan Hallam led to La Femme de Cabine – an homage to the House, fusing anonymity with ubiquity

Hallam’s bond to art and sculpture commenced in his childhood. His grandmother, a hat maker, passed down her craft to her grandson when he was five. When eleven, he dived into the subject of photography, capturing the movements of sand and formations of stones. «I started taking pictures on an Instamatic camera. I made so many mistakes, which I now infuse into my works. I see them as gifts. I evolve because I am looking to be shown things». Manufacturing the hat pieces and masks, Hallam picked up his enthusiasm for the eccentric and experimental: «My parents did not like me dressing up. My grandmother was entertained». Turning fourteen, Jonathan Hallam acceded to a hairdresser position, which he committed to at the age of fifteen, when he quit school and relocated to London. The teenager immersed into a punk-inspired, Victorianesque style of cutting hair. «A friend of mine requested me to cut her boyfriend’s hair. When I asked her where we should meet, she said ‘At Dazed & Confused’ as he was the art director at the time. I gave him this punky haircut, and he hated it. Three months later, he called again. He had this queue of people waiting outside and told me that I should do what I had done on him to these customers». This collaboration, arisen from eventuality, grew into a creative association and Hallam’s first exhibition with Rankin, Jefferson Hack, and Dazed & Confused. During this time launched his professional connection to hairstylist Eugene Souleiman, whom Hallam continued to assist the following years.

Souleiman and Hallam traveled to Paris to work in the fashion week’s backstages, styling models’ hair for labels like Yohji Yamamoto and Maison Margiela. When Hallam encountered Martin Margiela, he was knowledgeable of the designer’s works as he could see joints to the principles of his deity Man Ray. «Once, he came up to me, fascinated about a military coat I was wearing – a 1966 New York Police reefer coat with golden buttons. I showed him the tag, issue number, and told him about the piece. He stood there with his mouth open like: ‘Who is this guy?’. I had one of these punky haircuts, I wore the coat and trousers from a charity shop, whose size I had tried to adjust with safety pins. I looked like a peasant from the French revolution. From that moment, there was a fascination between us». It was not until Hallam’s photo lapse in the backstage that he grasped this man was Martin Margiela himself. Hallam had bought a disposable camera and created set-ups with objects in the Maison’s fashion show backstage. «When Martin tapped on my shoulder to say that I could not take photographs, I did not know who he was. I offered him the camera as I felt intimidated. He told me to bring the developed versions to the atelier to have a look at them. So I did». The Maison expanded its audience and with it grew the locations. «They wanted to capture this in ambient images». Intending not to limit the personality and vision of the photographers, the only guiding aspects provided by Margiela were visuals, words, or show details that could be interpreted. «I had two objectives in mind: never show anything too literally; never show four white stitches in one image».

As a strategy behind what to disclose to the public, film rolls were provided by the House and re-collected in bags, together with the photographers’ names. «They wanted to change the look of the House. Before it was Mark Borthwick and Anders Edström. At the time, I started to work with the flash like the Juergen snapshots. It was more what graphical forms I created that showed structures of the clothes». Hallam understood what the House was thriving for and directed his artistic handwriting towards «showing the construction of the garment rather than an overall ambiance». His photographic contributions and perception of the brand led to diverse collaborative projects with the House, including the A-Magazine, curated by Martin Margiela. «He wanted to show something of the personal work of all people who surrounded him». Hallam’s image series for La Femme de Cabine served as inspiration. «Martin organized for the models to come to my house, and I shot them in my living room. I photographed directly onto the paper, so it only exists one original picture». For La Femme de Cabine, which Hallam started to work on in 1997 when he moved to Paris, the artist experimented with a plate camera, whose light-sensitive elements are single parts of glass coated with light-sensitive chemicals, or, later, single films. «I had this camera from the 1950s. I wanted to incorporate spontaneity, like a polaroid. I photographed the pictures onto the paper, and it came out as negatives. I had a set-up in my bathroom of Tupper ware boxes, and developed my pictures as I went», Hallam explains. And proceeds, «On a Belgium flea market, I discovered black and white paper reverser. It was the chemistry I needed. It was out of date from 1964, so I went to the pharmacy and recreated it. On the packaging, they give you the chemical compositions and the percentages. I mixed potassium with sulfuric acid, but if you put too much in, it creates explosions. Nowadays, you need a license to be using these explosive chemicals. Then I started to take pictures».

The Margiela backstage photographs were presented to the public in an exhibition in Paris and Tbilisi, Georgia, soon after. Under the name La Femme de Cabine – The Revealing the show took place in a wine cellar – the origin of winemaking is imbedded in the Georgian culture. Inspired by the pilling billboards in Paris, layered with years of paper material, the artist thrived on recreating that sculpture-like aesthetic with his pictures. «When visitors walked in, they would only see the plain paper. Then I have these people behind, poster pasting them. They turned the paper structures and presented the picture to the observer while continuing to work on the other side. They built up layers». Working with a music maker from Georgia, the images were given a soul through the company of semantic tones. «I wanted a multi-sensory experience – like in Martin’s shows: fully immersed into all elements. People would have trippy experiences due to the high-frequency tones, as much as with the photographs and the way it was presented». Neon lights and tape supported his creative vision and polarized the crowds. When capturing his models, Hallam intends to not act as a photographer but as a mirror for the subject’s personalities, a transparent layer that elicits their innerness. «I see myself as a conduit allowing the subjects freedom in building a safe space acting like a mirror for them to reflect their expression. That authenticity connects the audience to the energy of the artwork». The intention of freeing the individual’s emotions is correlated to Hallam’s sculptural, choreographic practices, which have fused into his work approach in photography today. «Moving images are moving photography that allows me to tell a story. Performance is how to present those stories. Sculpture is how I express myself physically. The ideas that arrive would be suppressed if stuck in one format or material. I want to free myself from expectations and allow for the deeper evolution of my intuition».