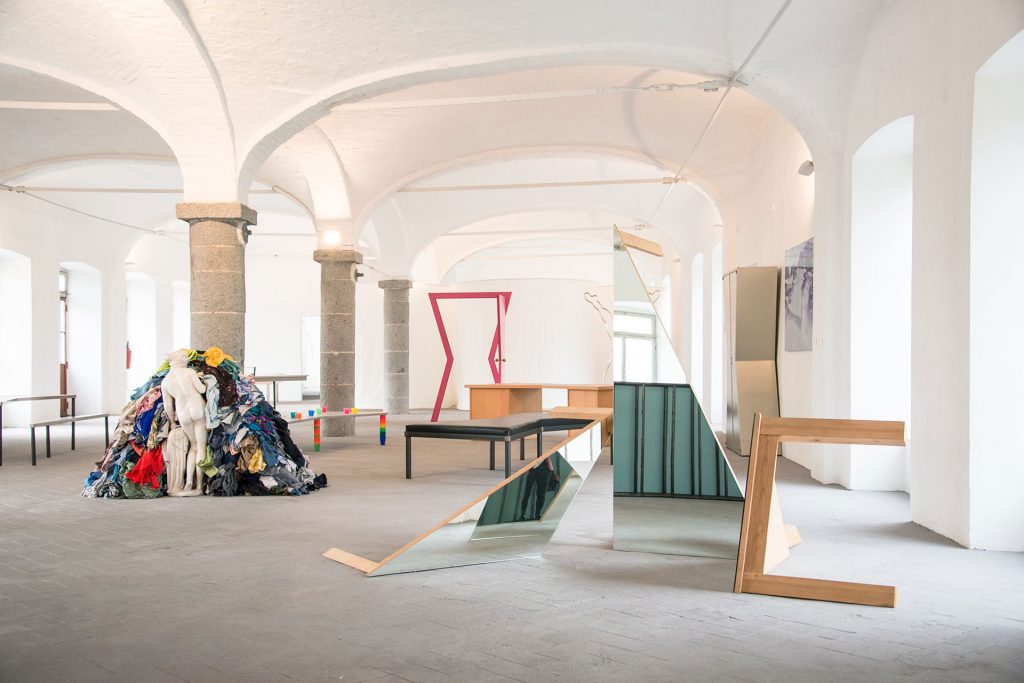 Fondazione Pistoletto, Biella. A reflection of love, respect and prison

How much do we owe our fathers? The easy answer is ‘everything’. Exhibiting it well is a matter of art. Michelangelo Pistoletto on display in Biella

In 1973, when Ettore Pistoletto was seventy-five years old, an exhibition entitled Padre e figlio [Father and Son], organized by Gian Enzo Sperone, was staged in Turin: the only occasion that would see the two artists present together collaborating on a project. When his son Michelangelo also turned seventy-five in 2008, he staged an exhibition to remember Sperone’s, entitling it Ettore e Michelangelo, i coetanei [Ettore and Michelangelo, peers] Michelangelo would have always used his father as an instrument of knowledge.

A new exhibition has opened that links to these preceding exhibitions, with a title that underlines the continuity of the discourse: Ettore Pistoletto | Michelangelo Pistoletto, Padre e Figlio. The father’s still lifes enter into dialogue with the son’s mirror paintings: in one of these, two parents are portrayed from behind. “One does not stand before the mirror to look at the world, but one turns away from it to turn one’s back on it” – at the center of one canvas is a screen of printed child’s face, Michelangelo at the age of three months, portrayed by his father.

The current exhibition is staged in several locations across the town of Biella. The Italian garden of Biella’s Palazzo Gromo Losa is a protected garden – and in the Persian language, a protected garden is indicated with the word ‘Paradise’. Here, Michelangelo Pistoletto created his recent work, Abbraccio all’Infinito (Endless Embrace). It is a habitable steel sculpture, three meters high and almost seven meters wide.

At the intersection of two ellipses sits Metrocubo d’infinito (Metrocube of infinity), a historical work dating back to 1966, consisting of opaque surfaces reflecting inwards for maximum refraction. To enter it, the visitor must apply pressure to a line of flexible bars arranged vertically which chime harmoniously when they move. The structure resembles a cage, a prison – a duty. It is a matter of “leaving a legacy to our fathers”, aphorizes Michelangelo Pistoletto.

Ettore Pistoletto (1898 – 1981) was born in Arnodera, a village in the municipality of Gravere in the Susa Valley. He taught himself to draw and paint from a very early age. Drawn to the genres of landscape and portrait, he preferred the palette knife to the brush. Ettore was deaf, says his son Michelangelo: “He lost his hearing due to meningitis at eight years old. He began to look at the world, rather than listen to it. At school, perhaps it was the third grade, while the teacher explained, my father could not hear, instead he spent his time copying the fresco of a Madonna. Since then, the eye has been privileged in our family”. In 1923, Ettore Pistoletto participated in a collective exhibition at the Monteu Art Gallery in Turin, before moving to Biella, where he met Count Ermenegildo Zegna – who in 1929 asked him to work on a piece for his family home. Count Zegna wanted to decorate a shed that he had transformed into an indoor portico, closing it with Liberty-style verandas, to welcome guests without bringing them into the main house. The portico was accessed through the garden (as it still is today), along the outline of a bowling green. The Count commissioned the young Ettore Pistoletto to produce a set of depictions representing the steps of wool processing: it was a work that took two years to complete, the story of wool from washing to weaving, through shearing, beating and carding, dyeing, spinning, warping and more. L’Arte della Lana nel Medioevo [The Art of Wool in the Middle Ages] was the title. In the work, we recognize the two protagonists: the client Ermenegildo as Francesco Datini, a merchant from Prato, pioneer of modern capitalism and the artist Ettore in the features of a common merchant. “Here in Trivero, Ettore also met a budding young painter, Livia Fila,” adds Anna Zegna. “She would become his wife and the mother of his son Michelangelo”.

On display today at Casa Zegna, on the walls around a new edition of Metamorfosi (Metamorphosis – the work comprising rags divided by a mirror) are other paintings on which Ettore worked in 1952: these portray the construction, in all its phases, of a street called Panoramica Zegna, a set of fourteen oil paintings, created en plein air. In 1952, at the age of 19, Michelangelo became his father’s driver (Ettore was unable to drive because of his deafness), accompanying him around the valley and waiting for him during his painting sessions. The Panoramica Zegna links to Trivero, ascending through the Cervo Valley. It was Ermenegildo’s desire, continues Anna Zegna: “My grandfather imagined that road. Every Sunday, smartly dressed in his shirt and tie, with hat and cane, he drew it while walking along the paths of the valley until he actually had it made”. Back then, roads were built for military reasons, to join towns – Panoramica Zegna was among the first roads to be developed for the purposes of pleasure, we might say tourism, but that would be out of place. The primary reason for the Panoramica was to be able to offer those who travelled it beautiful views, a pretty route, the spectacle of nature. Today the Panoramica integrates with the Oasi Zegna, a natural park spanning more than one hundred square kilometers – another of the Count’s old projects: on the Trivero slope and running up the upper Sessera valley, Ermenegildo started a forestation project that would bring half a million conifers, turning a barren mountain into a garden.

Michelangelo Pistoletto was born in Biella in 1933. His artistic training began in his father’s studio where he also restored paintings. “Hundreds of paintings passed through that studio, from all periods, on which there were sometimes cognitive problems to be solved before I could restore them to optimum condition. My father wanted me to paint, but I had decided that I would never be a painter if that was what painting was. My father did landscapes and still lifes and wanted me to do those things with him. I told him I’d never do them,” recalls Michelangelo. In 1998, in a former wool factory in Biella, Michelangelo Pistoletto created his foundation, naming it Cittadellarte. Today, on visiting the foundation, our gaze stops on a wall, where a manifesto reads: Cedere una parte di me stesso a chi desidera cedere una parte di se stesso (Giving a part of myself to those who want to give a part of themselves) Upon entering, the observer then stops in front of a string of rooms. If you continue straight along the axis, the passages between one room and the other are aligned – on the final wall a mirror reflects the corridor that seems to continue in an optical game. It is impossible to tell where that mirror is placed. If we look more closely, we note that above each passage between one room and the next, the word ‘Figlio’ [Son] is displayed: at a certain point the word Figlio turns into the word ‘Padre’ [Father] – when the mirror begins to reflect what is written on the other side of the same passage.

The exhibition is staged across three locations:

The exhibition was made possible with the support of: