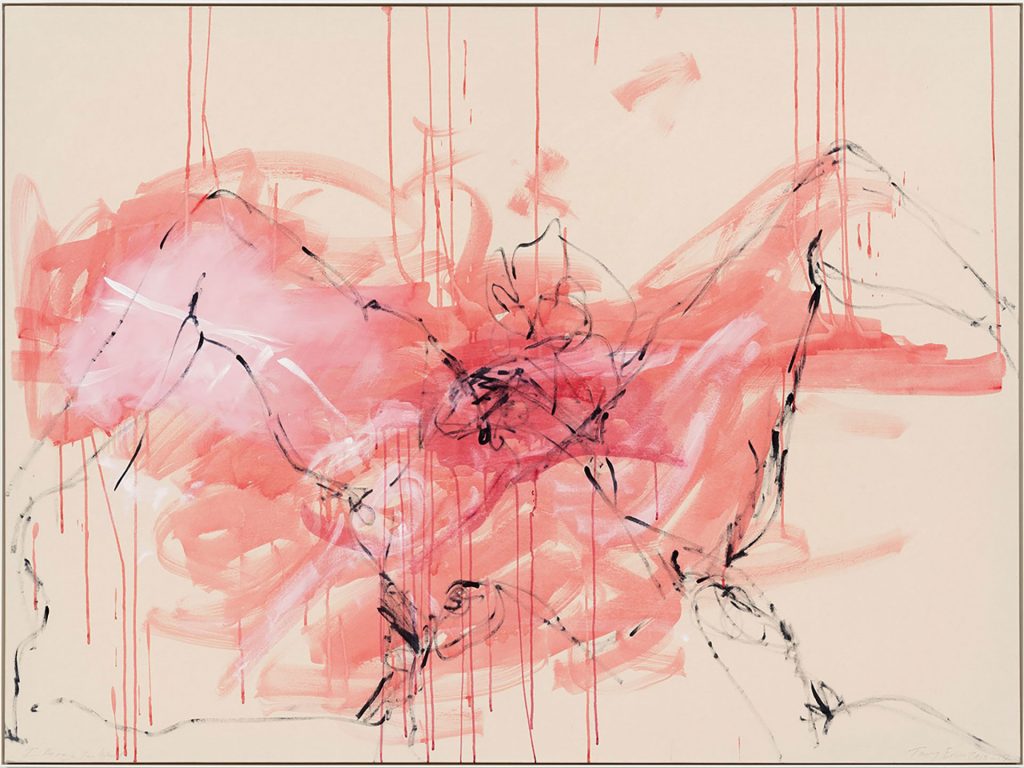 At White Cube Bermondsey in London, the largest of the bronze statues is 9 meters tall. The Mother is a series dedicated to Emin’s mom

Where there’s shame, there can be no art. Every dirty corner of one’s soul, of one’s daily life, must be dug up, exposed, massacred forensic pathology on a living corpse. Nothing can be kept hidden, personal every shadow must be available to the story. This stripping off, this uncovering is not a process with an end point, it is something infinite: you can dig inside, move other organs, open other veins, open up another heart that you didn’t think was hiding in the brain. The field of investigation is the dimension of anxiety that transforms into fear.

The insomnia room: fifty self-portraits during a period of insomnia diagnosed in 2018. Those who enter must experience the same emotions that Tracey Emin experienced: stress and suffering, in selfies taken with an iPhone 10, blown up and printed. Traces of the artist’s eyelid reduction, the most common cosmetic reconstruction intervention among women, are clear.

Tracey Emin’s art can be defined as expressionist, with constant references to the female nudes of Edvard Munch, the sensual vertigo of Schiele, and the realism in the movement of Kathe Kollwitz. The A Fortnight of Tears exhibition traces this story, on display at London’s White Cube until April 7, 2019. Young British Artists of the 1990s, Tracey Emin and Damien Hirst make up the front line.

In 1993, in a solo exhibition at the White Cube, Tracey displayed the packet of cigarettes her uncle was holding when he was decapitated in a car accident. Everyone I Have Slept With 1963 – 1995: a blue tent, with the names of all those with whom Emin had slept in a bed created during Emin’s relationship with Carl Freedman, later acquired by Charles Saatchi and exhibited as part of the Sensational exhibition in 1997.

Of the same period and attitude, My Bed, a point of reference in British Art: the reproduction or transposition of the bed where Tracey spent several weeks following a break-up: sheets, Polaroids, condoms for consolatory males, cigarette butts, vodka, newspapers, sanitary towels, cuddly toys, toothpaste, a razor, biscuit crumbs.

In 1999, They want you to be destroyed dealt with Diana Spencer’s bulimia. As for Emin’s ethnic background, her mother was Romanian a Rumney, of Romani descent, her father Turkish Cypriot (through whom today she is related to Meral Hussein-Ece, a member of the House of Lords). Tracey has been raped twice, the first time at age thirteen during a group attack there is a video on display, How It Feels, from 1996, where Tracey talks about the resulting abortion as she walks around London, chewing something, perhaps a soft licorice sweet it is not clear if her front lower incisor is stained or missing.

The second rape and the second abortion at 18: she hemorrhaged during the surgical procedure. In the paintings dedicated to her mother, Pam, who passed away in 2016, the human figures appear as stains. Tracey brought the ashes back home from the crematorium, she felt like a thief she couldn’t carry the burden of what would happen later, which was already a now.

In a room at the back of the hall which is accessed via what looks like a back door, in a video Tracey’s mother’s ashes reappear: a wooden box on the kitchen table. Emin’s art remains definable as work in progress, conceived in layers. Her works are on sale at the White Cube starting at £22,000 for the smallest, up to the bronze statues that run to £400,000, with some larger paintings exceeding £500,000.

Her bronzes are conceived on small models, then 3D printed at full size then worked in pieces for assembly. The bronze is treated with potassium, to which a special renaissance wax is applied to make the metal shiny a treatment to be repeated at least once a year in order to maintain the work. At the White Cube Bermondsey in London, the largest of the bronze statues is 9 meters tall. The Mother is a series dedicated to Emin’s mom, and includes a commission for an area of public land in Oslo, near the Edvard Munch Museum.

The statue is due to be installed in 2020 but the negotiations have not yet been concluded. Despite what she suffered, Tracey Emin lives her heterosexual relationships according to the clinical norm. Today she is one of the artists with the greatest economic heritage. Emin lives a relatively modest life, compared to that of Damien Hirst. She teaches drawing at the Royal Academy of Arts, sharing her time between London and Provence and returns frequently to Margate in Kent where the locals adore her.