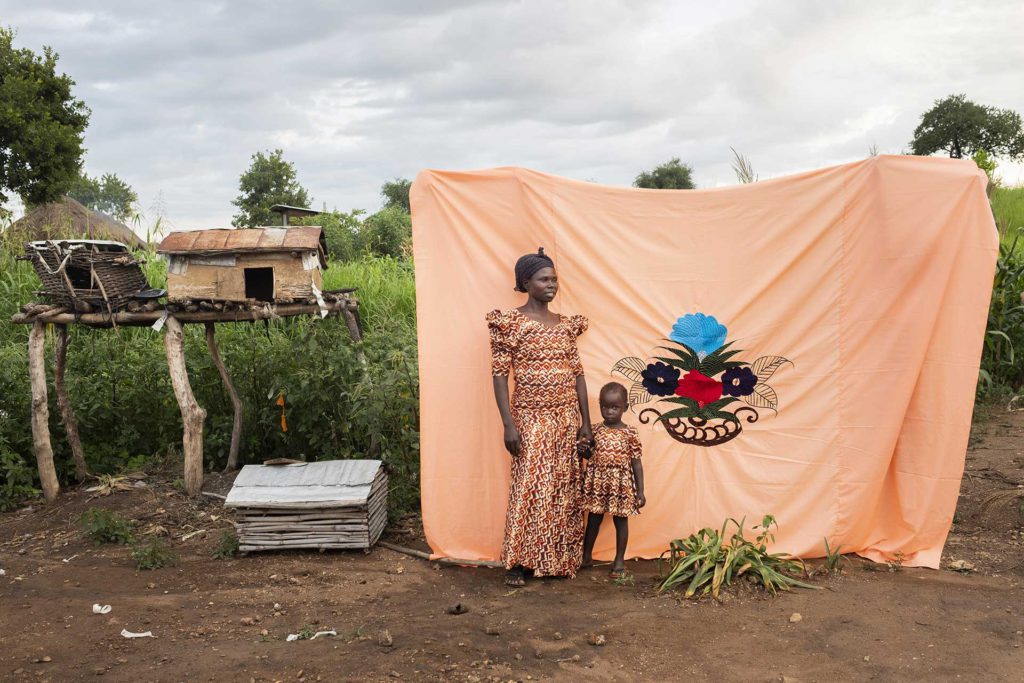 South Sudanese women fled their country only taking out with them a few clothes. They’re now producing these to create their own business

The Republic of South Sudan became the newest country in the world after declaring independence from Sudan in 2011, in the aftermath of several war periods that originated as far back as 1955. Independence did not shift the precarious conditions of the country though, whereas a South Sudanese Civil War started soon after, in 2013, and reached an official ending in 2020. Massacres, ethnic cleansing, and other human rights violations have been at the heart of all these conflicts, and even though a national government has been formed, violence and division are still being reported within the country. As a result of decades of instability, the community is struggling to rebuild a functioning society within their borders. In 2021, it is estimated that almost seventy percent of South Sudanese need humanitarian help. The diverse ethnic groups that still live in the nation are politically separated and often on the verge of conflict. The millions of South Sudanese citizens that have fled the country are now living in refugee camps situated in Uganda and other nearby countries. During the pandemic, their already erratic circumstances have worsened – unemployment levels rose while NGOs faced logistic problems to reach the camps. The ambition of going back to South Sudan is shifting away due to the multitude of physical and mental burdens demanded to its people. When sustaining basic expenses is a daily hassle, building resources for the future seems beyond the bounds of possibility.

The heritage of South Sudan is instead entrenched in both African animist and Christian traditions, which have long been manifested through artistry. Besides, culture is one of the pillars to reach sustainable development and is at the heart of the SDG’s. A fashion transition to a more sustainable industry can’t ignore the concepts of culture and human impact. Anyieth D’Awol, a South Sudanese human rights lawyer, founded the non-profit ROOTS of South Sudan project in 2009 in order to generate the empowerment of women through financial stability, education and cultural preservation. Their organization center in Juba allows women to join each other in creating beadwork and other handcrafts blending their different ethnic styles, which then proceed to be sold to support them and their families. Nora Lorek and Nina Strochlic, a documentary photographer and a writer, had a similar goal when they founded The Milaya Project in 2019. They run groups in the Bidibidi refugee settlement in Uganda, inhabited for the main part by South Sudanese, where women sew milayas, a traditional art of embroidered bedsheets. Both organizations erect a market for handcrafted goods that evince the history of South Sudan, safeguarding the voice of the community. While meaning to financially impact the women and their children, these organizations also create a transfer of identity, expression and mental support.

The Cultural Intellectual Property Rights Initiative defines cultural sustainability as «acknowledging the sustainability that is culturally embedded within traditional craftsmanship by supporting knowledge transfer to future generations». As in other Southern and Eastern African countries, the body in South Sudan is used as a form of artistic expressive channel, representing human primitivity while being reflective of the lack of material resources. The rural landscapes and the over sixty ethnic groups result in a combination of styles and customs in clothing and accessorizing, often inspired by the surrounding nature. Jewelry is an expression of both creativity and respect among the main tribes, with the stylistic choices in beadwork as indicators of social status, age, wealth and origins. The diversity is the core of the work of Roots of South Sudan; founder D’Awol explains the Juba center shows pieces from all the different communities, so that the women working or visiting can feel safe and at home. Their production doesn’t revolve only around beadwork, it includes many other forms of traditional cultural expression such as wooden art, metal carving, grass weaving and even bullet casings objects, a darker but filled with meaning artistic statement. The ethical differences can also be distinguishable in milayas, the embroidered bed sheets that Lorek found in every South Sudanese household in Bidibidi, where women sew antelopes, birds, flowers, alligators and other images. The choice of embroidery is rooted in what was taught to the woman within her family. These handicrafts also embody life pillars. Milayas are gifted when kids are born, worn as veils during marriages, or left to rest besides a community member when he passes away. This is what struck Lorek when she first visited the Bidibidi settlement: every woman she met brought a few of what looked like bedsheets when escaping South Sudan. Besides being used to carry objects and protect themselves from the cold, these fabrics were also a reminder of shared memories and festive occasions. The choice of the beads in beadwork is specific to events; in some communities, the bead colors chosen for the birth of a child will match the ones gifted to his/her mother and father on the same occasion. These customs all create a communicative channel that projects such as ROOTS and Milaya aim to protect from the war and the society’s changing rituals. In terms of environmental sustainability, these projects focusing on South Sudanese craftsmanship also help reinforce a slow-paced and locally issued fashion production. Every piece produced by these women is unique; the individuality factor can help upholding a more sustainable fashion consumption through the reduction of waste.

Supporting artisanal production of South Sudanese women is helping to pass on the heterogeneity of knowledge within the population, while also relieving some of the tensions. «The war was divisive. Nobody shared anything. Except at the center, because the women were more than just acquaintances and they’ve been there with each other for so many years», D’Awol says. The traditions of South Sudan are fragmented among ethnicities, religions, and even among smaller communities or families. In the Bidibidi groups, Lorek says women reward these differences as a way of building a community while numbing the pain. The chance of a future is what projects such as The Milaya Project and Roots of South Sudan try to prepare refugees for. There is an unseen goal behind promoting these spaces for women, which Lorek calls «the trauma healing». Used to define the main social impact created by The Milaya Project, it is an unforeseen consequence of finding a space where these women can work on artisanal goods and spend time together. In her words, the women involved in the project find relief in just sitting there and talking with each other. Most of South Sudan’s population has yet to live a decade without wars and violence. The milayas and beadwork they fabricate are inspired by the few moments in their past that weren’t defined by political conflicts, such as marriages and other celebrations of a normal life. The empowerment of South Sudanese women is not just financial; it comes from feeling rewarded for their work and ends up in creating a new value to their life.

is a human rights lawyer from South Sudan. In 2009, she founded The ROOTS Project, a non-profit organization that provides a safe environment for women to pursue economic independence through traditional crafts. She works with 120 women from 22 different tribes in three locations, including displaced people’s camps around Juba, South Sudan.

is a Swedish-German documentary photographer who focuses on migration, culture, and human rights. Nora is the co-founder of The Milaya Project, a non-profit that started as an assignment for National Geographic and now connects South Sudanese women in Bidibidi refugee camp with customers who want to support their traditional artform.