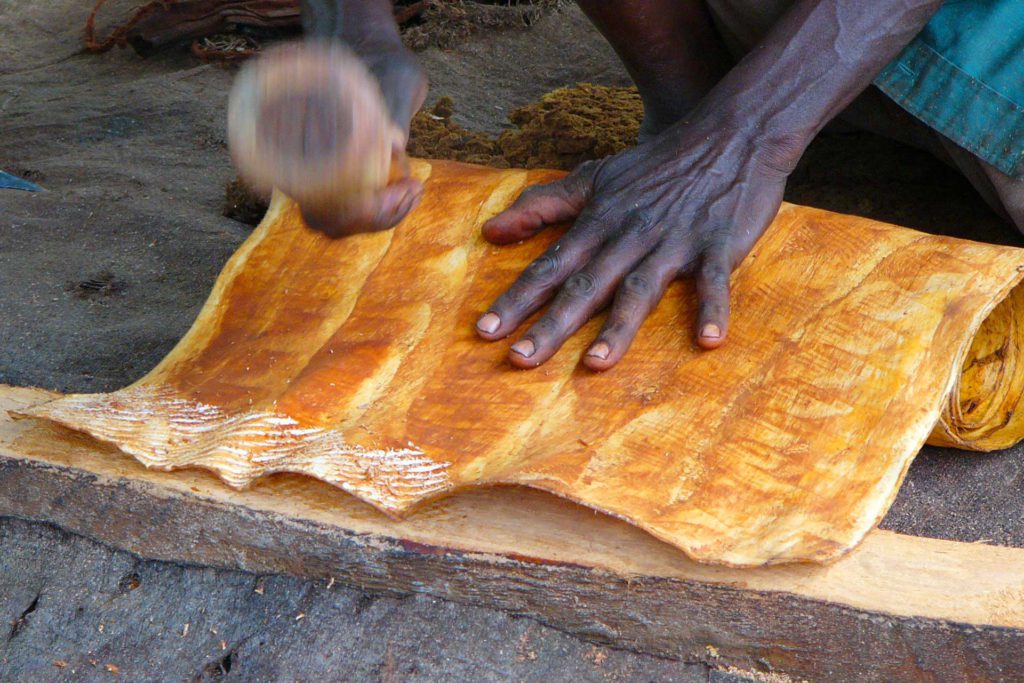 Uganda: textiles deriving from the bark of trees – the Bark cloth case

From the Ugandan tradition comes the creation of a type of fabric derived from the bark of trees, produced manually with a cost close to zero

The tradition of bark cloth has its roots in African culture and, in particular, in Ugandan culture. In 2008, it was included in the Unesco Representative List of the Intangible Cultural Heritage of Humanity. The origins lie in the context of the Baganda people, located in southern Uganda. Artisans made bark textiles for the royal family and the community. The technique, still used today and revived after a slight dispersion, is sought in the prehistoric era and precedes the invention of weaving. The inner bark of the Mutuba tree is collected during the humid season and then, in a long and manual process, beaten with different types of mallets. This fabric is often transformed into a toga and is worn especially during ceremonies but is also used for home decor. Unesco traces the history of this tradition recalling how with the introduction of cotton fabric in the nineteenth century, production slowed down, limiting the use of bark cloth to traditional functions related to culture and spirituality. In 1999, Heintz and Barongo, given their intercultural capacity, founded a company that settled between Uganda and Germany, contributing to the revival of this heritage. Modernizing it and making it known in the rest of the world. The functionality is also one of the issues faced by the company that wanted to make this material more resistant, not affecting the original method. Nowadays the projects of the company have reached other territories, as Honduras, where there is also a similar tradition of bark clothing but different in the methodology of its creation.

The production process and the cost of the bark cloth

Most of the production is concentrated in Uganda, following the conventional manner, and then some products are redefined in Germany. Ficus natalensis is the species used in the production of the fabric, being common in southern Africa and in Uganda, where this tradition is kept alive, while in other places such as Rwanda it has been lost. The direct ownership of the company allows Heintz and Barongo to have under control the productive process that employs about thirty-five women. The process begins with flaying off the outermost part of the bark of individual trees. Then the remaining inner part of the bark is cut at the base and along the trunk, this allows it to move to the next step in which the tree is peeled. These trees, in addition to being used to produce clothing, are the main source of livelihood in food production and the removal of the bark is like a wound. After peeling off the bark, it is collected in a roll and it is estimated that for each piece collected, it is possible to produce a dress. The tree is then rubbed and then covered with banana leaves in order to protect it and allow the bark to regrow in nine months; by implementing this conservative method it is possible to keep the trees alive for about forty years. To make it malleable, the material is simmered over solar stoves for twenty minutes and then beaten manually with specially constructed wooden hammers to make it uniform. Then the material is placed in the sun to dry and this process of boiling, beating and drying is repeated until the desired strength is achieved. The tools used are basic and are basically based on knives, mallets and tools constructed from banana trees, the cost of production is to be found in the physical strength of the human being and solar energy. «It’s a decapitalized process, people don’t need money to do it, everything is built manually throughout the process», explained the owners, specifying how this can be an added value in a less developed country. There are no machines involved in the production, the manual energy of each worker becomes crucial in such a process.

The process described above actually produces a type of fabric, called Bark cloth in its traditional form, which takes on a reddish or brownish color at the end of the process. This is the most natural and purest form of fabric available from Bark cloth®, the owners said, not a fiber that is mixed with other materials. The functionality is limited, when it comes to abrasion resistance for example five thousand cycles is not a great performance. A limitation can also be represented by the flexibility of the product, this material tends to be stretchable in one direction and immovable in the other, in this case can be made a lamination with cotton. The composition of the fabric is modified according to customer requirements with the addition of additives which can be chemicals, such as waxes and synthetic materials to produce a similar leather product. These additives, though, represent one or two percent of the total fabric composition. Regarding colors, the commitment is to produce natural dyes, such as the use of iron water that produces black and dark brown, or some plantations that allow red or green colors. These do not allow to maintain the desired color for a long time, which is soon lost, so non-natural fabric dyes are also used. But it should be noted that being a wood product before being a garment, when put in the sun instead of losing its color intensifies it. Resistance to water and abrasion can be produced through the use of natural waxes such as carnauba waxes from trees or bees’ waxes. So there are two types of products, pure and traditional bark cloth or a fabric modified according to market demands that is called Barktex. The raw bark fabric is one hundred percent biodegradable when exposed to atmospheric agents, but some studies, the founders report, on this fabric found inside some Egyptian tombs demonstrate its ability to preserve. Through the industrial composting process, biodegradation is faster and is completed in a few weeks.

The positive effect of this type of project is to be found in the socio-cultural field. Heintz and Barongo stressed out the concept of recovering and working in remote areas, where nobody wants to invest, targeting small villages living in isolated nature places as communities. These initiatives are found to have a negligible starting investment in the territory close to zero, no electricity or water supply are needed. For this reason, the CO2 footprint and the energy expenditure in the production of textiles is close to zero. Also, because the tree absorbs carbon dioxide and compensates for the work involved. The trees are only harvested so that they can continue to produce both bark and food in the future, without implementing changes in the natural setting of the environment. Trees treated in this way for a long duration also allow sustainability in terms of food supply, as they should still be grown by the local community, the bark cloth represents an additional activity that allows a further gain to the community. In fact, farmers often plant these trees among the other fruit trees they grow and cultivate. The workforce employed by Bark cloth® appears to be focused on the female population who have no training or few years of schooling. An adverse aspect is the dislocation of the company between two poles, the one in Uganda and the other in Germany. The distribution and transportation are inevitable from Africa to Europe, when the material is transferred each time in small quantities towards the headquarters. The company tries to limit this impact by sending directly to the customer in case of big orders.

The low response from fashion sector

Although it can be a valid alternative for the fashion market, which is confirmed to remain in the average for the cost of fabrics sold per piece, there are few collaborations and requests in this area. The founders confirm interior design as the market in which they operate most successfully and underline the criticalities that the fashion system proposes again when interfacing with the production process. The difficulties encountered start from the impossibility of having a fair price as producers of raw materials compared to a business that deals with living. The speed that characterizes the fashion industry, even when it comes to brands defined as slow fashion ones, demands new products and materials every two months or so. And as much as a fabric company can develop new offerings, such as the latest collaboration with some local communities that naturally produce a similar rubber material, it’s hard to sustain these rates. Even because working in direct contact with the environment there may be conditions in which it is not possible to produce and even less to collect the bark of trees, such as during storms. The price remains one of the determining elements for which the big names in fashion, despite having tested the material, decide not to use it. Some brands in the footwear industry have tried to produce a shoe with this material, never putting it on sale because the cost of the material exceeded the cost of production close to 3 dollars. Although the material, the founders wondered, is not made to be worn every day, it has peculiar properties such as not getting dirty and maintaining high hygienic conditions by being antiseptic. Different experiments to use it in the field of medicine are now recurring, explained they. On the contrary, some brands embrace the need to return to traditions and to empower less developed local communities through sustainable raw material production, such as the brand Nuba, which produces both clothing and accessories.

The Ugandan-German family venture Bark cloth is pioneer of systematic barkcloth development and production, dedicated to the continuing cooperation with small-scale organic farmers from Uganda – since 1999.