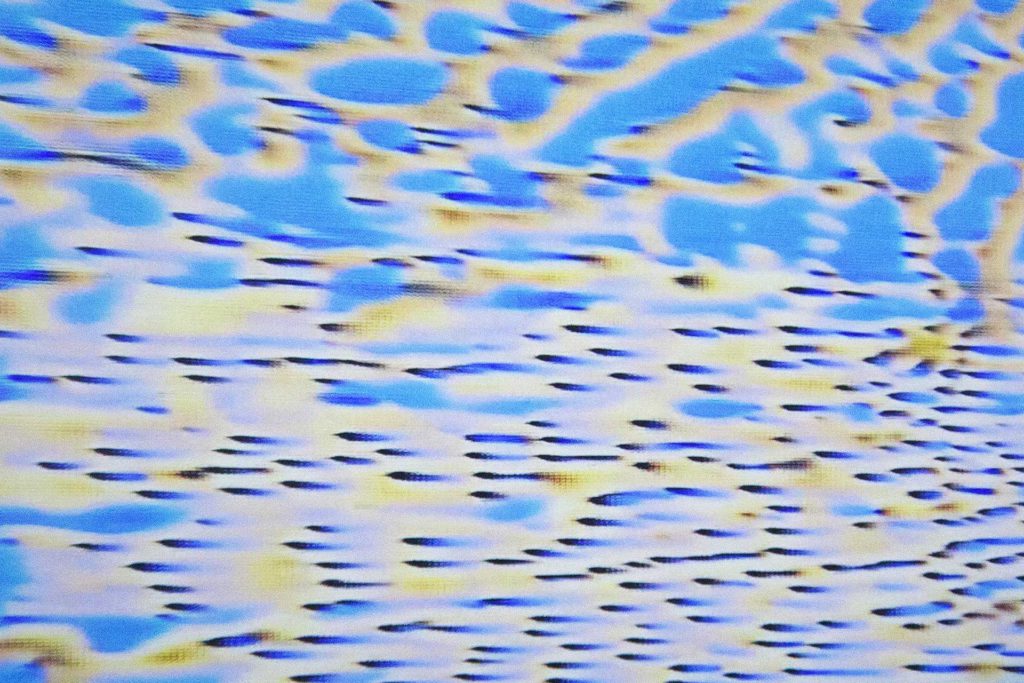 Cold Flux, a three-channel AI generated video installation by London-based artist Ben Cullen Williams, marks the first ever presence of The Antarctica Pavilion at the London Design Biennale hosted by Somerset House. Supported by PANGAIA, Cullen Williams’ installation for the London Design Biennale 2021 speaks to the intersection between technology and the environment, mirrored by PANGAIA’s own ethos as a material science brand that, inspired by the natural diversity in our ecosystems, develops products such as the biobased fibers C-FIBER, which combines eucalyptus pulp and seaweed powder, and FLWRDWN, which combines wildflowers, a biopolymer and aerogel; the technical fabric grape leather, a leather alternative; and the treatments PPRMINT, a durable odor control finish and antimicrobial treatment, and AIR-INK, a water-based black ink made from air pollution. PANGAIA’s support of both The Antarctica Pavilion by Cullen Williams and The Global Goals Pavilion by Es Devlin balances respect for artistic integrity with support and amplification through their platform, with Cullen Williams stating that PANGAIA’s support helped move the conversation outside of the Art world – «the rarefied audience» – exploring the need for more Climate Action and whether there’s hope if we act now.

Cullen Williams’ affinity for Antarctica can be traced back to his admiration of Captain Robert Falcon Scott who led the British Antarctic Terra Nova Expedition from 1910 to 1913. Though the Edwardian era expedition ended in the death of Scott and four of his men, it is remembered for its human endeavor, the collection of vast scientific samples and data, the surveying of previously unknown regions and the creation of historic literary and visual works. Among these are photographs by Herbert Ponting, which were later published by the Scott Polar Research Institute of the University of Cambridge and Salto Ulbeek publishers in an archival portfolio of photographs hand-developed from Ponting’s original negatives. Finding influence in these black-and-white images, Cullen Williams remembers, «I was interested in doing a piece about polar light». Through a chance meeting with his nephew, Cullen Williams connected with polar explorer and founder of the 2041 Foundation, Robert Swan OBE – the first person in history to walk to both the North and South Poles – who subsequently invited him on a 2016 expedition to the Larsen-B ice shelf in Antarctica. « I had this photographic series mapped out in my head. I was interested in the relationship of qualities of light at a certain incidence with the snow, the Sun’s behavior and refraction through ice». Upon setting foot on the largely uninhabited continent, Cullen Williams says that that its beauty came with an unexpected rawness, «what I was most taken aback by when I was there was how raw it was. You walk along the shore and it stinks and then you turn to your right and they’ll be blood smeared across a bit of floating ice where a leopard seal has attacked something. You get the sense that this is wild; untouched by man; primordial».

The expedition resulted in two initial works by the artist: Fragile Strength, 2016, a body of black-and-white photographic works that were recolored using a generative adversarial network, and Passage, also 2016, a seven-minute single-channel video that used manipulated footage accompanied by soundscapes and spoken word. Published in a series of different formats, Cullen Williams believed that the relevance of the message meant it needed to be seen outside of the obscurity of the Art world. Cullen Williams also wrote about these works, publishing a piece in Issue Ten of Real Review where he explored how the objectivity of using AI – adversarial generative networks and machine learning algorithms – to manipulate his works resulted in «uncanny tones and hues which are suggestive of something other, familiar but different». He expands on this in our interview, exploring how uncanniness is an attempt to disconnect the viewer from the sense of familiarity they have with the glossy imagery of Antarctica perpetuated by nature documentaries filmed on high-definition cameras.

Increasingly concerned about the environment and intrigued by the relationship between technology, the environment, and landscapes as a focus of his work, Cold Flux is a maturation of Cullen Williams’ projects. Hearing of the Biennale, the artist recalls feeling that the continent needed a presence: «Robert Swan instilled this belief, this message, that Antarctica doesn’t have anyone protecting it. It doesn’t have an Embassy, and it’s up to the collective to protect it. When treaties expire, it’s on everyone to get those treaties renewed». After speaking to Es Devlin, artistic director of the London Design Biennale 2021, Cullen Williams now presents the first ever Antarctica Pavilion alongside its administering body, the 2041 Foundation. Responding to Es Devlin’s theme of ‘Resonance’, Cullen Williams argues the way in which the theme is relevant to Antarctica, exploring «our future as humans is so dependent on the future of the ice caps in the North and South poles, our relationship to sea levels and carbon capture». He continues, «our individual actions go out from us and then they impact the poles at either end, even though they feel so distant».

Invited to view Cold Flux, on 8th June 2021 Lampoon attended Somerset House. Upon entering the courtyard, where Es Devlin’s 400 tree Forest for Change is brought to life, PANGAIA’s presence is felt with ushers wearing PANGAIA’s SDG capsule; a collection of recycled cotton hoodies and organic cotton t-shirts celebrating the UN Sustainable Development Goals which outline a plan to eradicate poverty, fight inequality and tackle the climate crisis. Arriving at the South Wing, the artist shows us down a flight of stairs into a labyrinth of exhibition rooms until we arrive at The Antarctica Pavilion. The video footage taken by Cullen Williams, and altered by machine learning algorithms, runs on a twenty-seven-minute loop and is projected onto three walls crystallizing from abstracted forms to manipulated footage: a reflection of the melting and freezing, forming and un-forming, of the ice caps and the continual change, turmoil and flux of the continent. Juxtaposing this footage, shorter clips of AI generated video of the surface of the Sun intersperse that of Antarctica. Cullen Williams expresses, «I was moved by how animated the surface of the Sun is». He continues, «we have this idea of the relative stability or stasis that the Earth is in, which is in contradiction to the fluidity of the Sun». Dismissing the stillness of the Earth as «an illusion», Cullen Williams explores how Antarctica is a place where we as humans are able to see the animation and fluidity of the Earth. Describing the collaborative artistic process, Cullen Williams explains how he started with speaking to the coder, Damien Henry, who «had the start of the algorithms to create the footage». He continues, «as we started working with Bryce Cronkite-Ratcliff – a creative technologist – we used that algorithm as the basis to start testing, training and trying to rebuild the icebergs using machine learning». The artist credits the machine as a key collaborator in the process, «between the three of us: the machine, Bryce and I, we navigated the output until we drew a line in the sand». Accompanied by an audio track, Cullen Williams also worked with the South London musician, Gaika, to create the sonics that support the piece. He explains, «I sent Gaika some of the early tests, an essay that I wrote about Antarctica and a few different sounds and fragments. He went away and produced something that he felt was in keeping».

Using technology to safeguard the environment

As an artist whose practice encompasses a variety of formats, including a number of structural installations – Interface, 2017, Remnant, 2018, and Pariah, 2020 – Cullen Williams hopes that the immersive video installation helps the audience of The Antarctica Pavilion to connect with the distant but critical region. Explaining his choices, Cullen Williams poses, «I’ve disengaged from the idea of telling people things, giving them facts or figures», continuing, «the way to speak to people is through the mode of affect». Whilst Robert Swan and the 2041 Foundation’s mission is to engage with businesses and communities on climate science and the promotion of sustainable practices such as recycling, renewable energy and sustainability, for Cullen Williams it is not the artist’s role to pontificate about solutions. However, he concedes, «if I can talk from just a personal point of view, outside of that framework, I am passionate about technology. Technology has got us to this point of a state of emergency and the only way out of it is through technology and innovative means». Looking to big business and government for solutions – PANGAIA being an example of a brand that is leading the way in terms of its vision to be an Earth-positive, regenerative business that gives back to the planet – Cullen Williams stresses «PANGAIA has this interest in technology, in finding technologically innovative ways to sort problems that technology has caused». Though putting the major onus off the individual, Cullen Williams speculates, «if you wear clothes that are sustainable or have a connection with the environment, it transcends to everything you do. To be clothed within materials that have that relationship can be powerful».

Ben Cullen Williams is a London-based artist who originally studied Architecture and Sculpture. Interested in the production of large, encompassing works that exist outside of traditional formats, his practice consists of sculptures, installations, photography and video. His work has been exhibited internationally across a range of spaces, galleries and environments including at the Musée d’arts de Nantes, Saddler’s Wells and The Bolshoi Theatre, amongst others. He also publishes written works and lectures internationally, alongside his role as an associate Lecturer at the University of Arts, London.