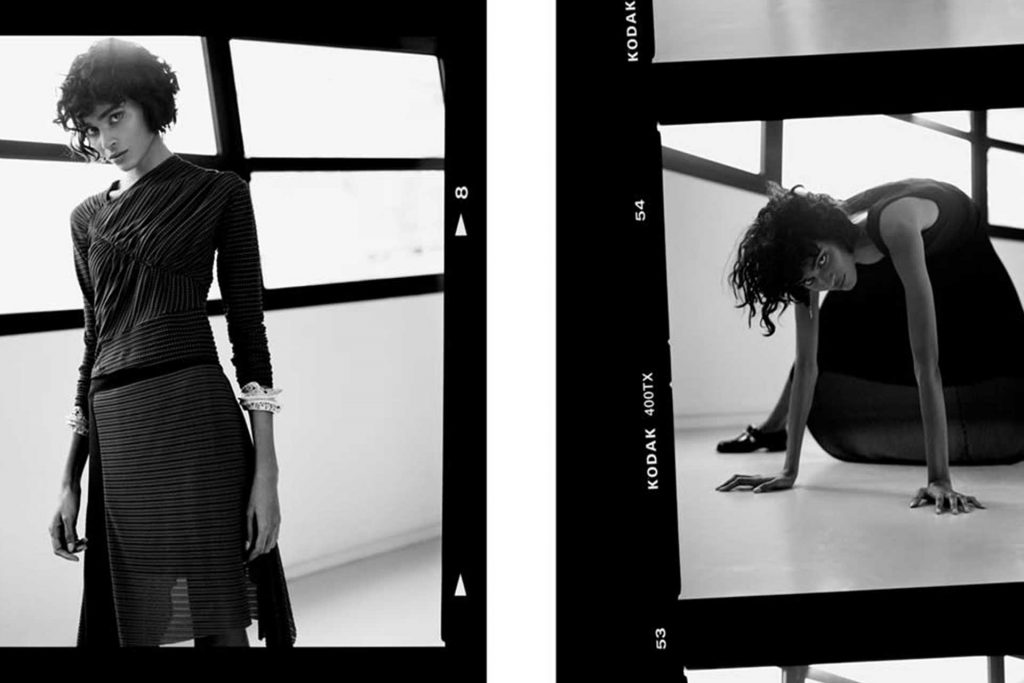 From upcycling marine waste to mixing surfwear with couture.

In March 2020, designer Antonin Tron went to Ile de Ré, his favorite surfing spot on the West coast of France, for a ten-day vacation after a busy fashion week – ATLEIN, his young brand named after the Atlantic Ocean, had just presented the Fall/Winter 2020 collection. He had no idea the seascape getaway would have to last much longer, a six-week lockdown looming over the country. Left to his own devices in his holiday home, Tron found an old dummy and some fabric and started to drape. Fast-forward several months, the result was a collection reflecting the brand’s essence, layering surf-like pieces of wetsuits over elaborately constructed dresses, one fleece-lined parka specifically inspired by the dry robe that surfers don post-riding waves to keep warm on their way to a hot shower. The pandemic initially hit Tron «like a tsunami». The imposed restrictions halted his momentum – since the brand’s founding in 2016, it received the 2016 ANDAM Creative Brand Prize and the 2018 ANDAM Grand Prize, with Bergdorf Goodman and Net-a-Porter lining up to stock the collections. Due to the onset of the coronavirus, Tron decided to refrain from showing a new collection in September and skip Spring/Summer 2020. «It was devastating», says Tron, «but we got back on our feet and it gave us an opportunity to reset». The pause allowed Tron to reassess his priorities and focus on fabric development: one year on, he presented the fruits of his labor – the Fall/Winter 2021 collection, presented between Men’s Fashion Week and Couture Week. This schedule change, while dictated by practical reasons, also poetically highlights the brand’s DNA: Tron got his start in the industry working on menswear at Louis Vuitton, moving after onto Givenchy and Balenciaga. There, he discovered his interest in jersey that came to be a signature fabric for ATLEIN. Jersey has been at the forefront of the brand’s collections since day one. Tron says he designs for the body in motion, «active and moving around», while remaining faithful to the ethos of couture dressmaking. «I always go back to the great masters of construction».

For his most recent collection, Tron was influenced by Madeleine Vionnet, who in 1923 established herself as couture’s high priestess by repurposing the bias cut. Previously only used for collars and sleeves, bias cut created dresses that fit snugly at the waist and flared out into a bell shape. Tron used the cut for several dresses in the collection, including look six and eight. «I wanted to achieve that sophisticated movement». Vionnet was also known for constructing her garments directly on the mannequin, spinning it on her piano stool to work out the shapes and lines – sometimes she used only one piece of fabric without any fastening, creating an antique drapery inspired by the Greek peplos. This, too, is referenced in Atlein’s collection: the ruched dress from look twenty six has no zip, just body-hugging jersey. «You can throw it on like a t-shirt, but it’s almost like a couture Madame Gres piece», says Tron, citing another past-century couturiere. What all three have in common is a respect for the female form – Vionnet and Gres were both anti-corsets, preferring silhouettes dictated by natural anatomy; Tron himself made the leap from menswear to womenswear as he finds women to be « interesting» for the purposes of draping and construction, because the curvatures of their bodies make a more diverse canvas than the angular male silhouette. His obsession with draping combined with the love for comfort explains why he’s been so committed to using jersey in all of his collections.

This time, Tron was able to make it from Seaqual fiber – a result of his efforts to minimize fashion’s environmental impact. It’s a recycled polyester yarn, made from materials like post-consumer plastic bottles and plastic waste retrieved from the sea. The waste is turned to plastic flakes, then pellets, finally made into yarn with nearly identical physical properties to virgin polyester. What excites Tron about the fiber is the collaborative aspect of it – it’s an initiative uniting NGOs, fishermen, scientists, authorities and private stakeholders in an effort to upcycle marine plastic and implement a circular economy at the same time. Seaqual also reacts to dyeing better than other recycled synthetic fibers, allowing him to be more experimental with color. The Fall/Winter 2021 collection is ATLEIN’s brightest so far, featuring vibrant orange, purple, and mint, amongst others. «I usually work with deadstock, it depends on what I find».The pitfall of expanding ATLEIN’s color palette is having to use synthetic dye. «We’re trying to find new solutions, but it takes time. I know there are new technologies for natural dyes that would get you the right color, but they’re not ready yet». As far as the environmental impact is concerned, there is room for improvement indeed: while the Seaqual Initiative works towards ridding the oceans of plastic by upcycling waste, the final product releases micro- and nanoplastics right back into the water system each time it gets washed; it’s an issue concerning all polyester fibers regardless of origin. «That’s why I never claimed that ATLEIN is sustainable, because as long as you’re creating something, you’re creating waste. It’s not a perfect system».

Tron has cared deeply about the environment from his childhood years, but insists on a holistic perspective that encompasses social issues. «Atlein has always been about utopia, even if it has a darker [aesthetic]… It’s about trying to build a better world and a new form of business. We’re trying to be as respectful as possible and to find a solution. The people that inspire me are questioning the established world». He used to be closely involved with the Extinction Rebellion, even designing a series of upcycled t-shirts featuring three species on the verge of extinction: the narwhal, the woodpecker and the white cheeked gibon, with twenty percent of profits donated to the environmental group. Lately Tron has decided to distance himself, redirecting his energy to a new group that he’s founding with some people from Extinction Rebellion. «It’s no longer about just raising awareness. We need to take action». The specifics are still a work in progress, as the lockdown in Paris prohibited the members from meeting. «That kind of thing you cannot do via Zoom, you have to be face to face». Tron feels the need to create positive changes on a systemic level: «Our society needs to evolve drastically. I don’t believe in shaming or blaming, but the problem is on the big scale».

After spending multiple years at big fashion houses, their environmental impact did not sit right with him and he decided to carve his own path. «I created Atlein because I wanted things on a smaller scale. The problem is the masses, the quantities. We need things that are local, things that are smaller, so you can have control over everything. If you use organic cotton that is picked up by children in Bangladesh, it’s not sustainable. You need to think about social responsibility and how you structure your business. It’s about being respectful on all stages of the chain, the human level and the environmental level, and that’s really hard, but you have to try». Tron selected his manufacturers from those he has worked with for years and with whom he has established a solid relationship. He prefers hiring family businesses that have been passing their practices on for generations. For development and production, Atlein works with family run factories in France to support employment in local communities and allows a traceable supply chain, simultaneously reducing carbon emissions as the garments are locally produced and don’t require air travel. The brand also works with factories in Italy and mills in Portugal, where Tron likes to surf. His own business is a family affair as well: the video presenting Fall/Winter 2021 has been a group effort, produced by his life partner Gabriele Forte, directed by Tron and his brothers Benjamin and Virgile. At the time of this interview, his brothers are in the kitchen, helping with editing the footage. His mother is mentioned in the credits for doing the catering on set. When asked about what he imagines the Atlein woman to be, Tron states: «She’s a grown woman, but she retains a bit of an edge, a grungy past that lingers».

Born in 1984, Antonin Tron studied at the Royal Academy of the Arts in Antwerp and apprenticed with designer Raf Simons. After graduating in 2008, he went on to work for Louis Vuitton, Givenchy and Balenciaga. In 2016, he founded ATLEIN, a brand striving to minimize environmental impact by implementing upcycling, short-circuit manufacturing and recycled materials.