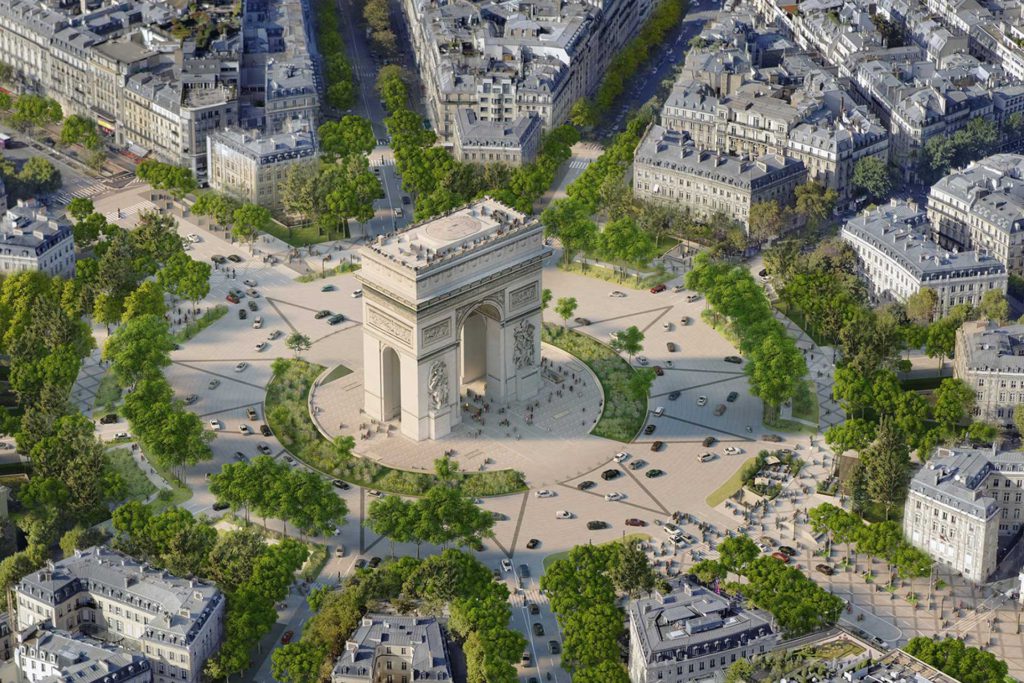 The trees on the Champs Élysées: «You have to be an activist. Denying it is not an option anymore»

«Paris is a mineral city. One of the capital cities with the least number of green spaces», says Philippe Chiambaretta, PCA-Stream’s architect and founder

Home to public celebrations, parades and protests, the-mile-long Champs Élysées is now undesirable to the Parisians due to high pollution, noise, traffic and weary appearance. The French avenue nicknamed is a district that has been subjected to change in a two-million-euro deal. Philippe Chiambaretta, architect and founder of PCA-Stream, the architectural agency in charge of the project talks to us about how the idea came about and the ideologies behind the design. «We were approached by a committee called Committee Champs Élysées that has existed since the year 1916; a non-profit institution that has gathered private owners of buildings in the Champs Elysées or brands that have stores there, or public institutions like Petit Palais or Grand Palais. This committee has the goal to promote the image of the promenade worldwide and for a couple of years now they have observed that the Champs Elysées has had a bad image for the Parisian people». Through the studio’s analysis a link has been drawn; one that combines the local condition of the Parisian promenade along with its surrounding. «The question was whether there was a way to ‘re-enchant’ the Champs Elysées for the Parisians so that they would be able to come back as they used to do until the end of the twentieth century. We started a two-year research program that we have presented as an exhibition, leading the city of Paris to implement our vision». When coming to define the different strata that could be molded to create the urban fabric, nature infrastructure, mobility, uses and infrastructure are the necessary steps into the reforestation of the Champs Élysées. «We need to change our traditional tools of urban planning and urban science. The Anthropocene phase that we are living in right now with the fast-growing population living in the cities is a matter not only inside the cities but on a global scale. We know that cities are responsible for global warming and we need new models to cope with this urban complexity that we do not grasp today». Chiambaretta divulges into the design strata saying, «The five layers we have studied are a dynamic system where these layers are not separated but interact with one another. The data that we are able to get from these have helped us quantify the situation, trying to move from opinions and feelings of the citizens to quantitative figures and data like the number of vehicles or level of pollution, noise, percentage of permeable soil as well as the number of trees».

The history of the Champs Elysées

«We asked ourselves how are we able to use this framework to our advantage? What is the history of the Champs Elysées? What is the current diagnostic and how can we act using these five strata to modify the situation and improve the attractiveness of the Champs Elysées? One way of doing this diagnosis had to do with getting rid of the traffic and pollution in the next ten years. The second issue was to create a direct access to the green areas and how are we able to recreate the attractiveness as a place to walk in. What we proposed was to use this space to research and implement a new thinking to what nature in cities is, which is not a decoration or landscape but an element to regulate the city’s temperature». The Champs Élysées runs through the soul of the city connecting the southeast with the northwest of Paris with the length of two kilometers where it once consisted of market gardens, fields and swamplands on the outskirts of the city of Paris. «When they started this avenue back in the seventeenth century it was located in the countryside, Paris was enclosed in a wall, and was surrounded by fields, forests, trees and gardens with their environment. André Le Nôtre, the gardener who drew the line of trees to continue the street of the Garden of Tuileries, which was a design for Catherine de’ Medici creating an Italian link between the Champs Elysées and Italy. A line of trees was the beginning of the creation of an avenue, and over time, few constructions were built around this area but still were protected and seen by Parisians as a promenade». According to PCA-Stream, through their research it was found out that Parisians have completely rejected the Champs Élysées to the extent that only five percent of pedestrians walk along the avenue. «We interviewed Parisians in order to know whether they have a good or bad image on the Champs Elysées. Forty percent of them inside Paris said they have a bad one, which in terms of statistics is high. When asked why, the most common answer was that the city is overly touristy, noisy, polluted, stressful and that it has become too artificial and dangerous to some extent. For Parisians there is no reason to go there. What the Champs Elysées had represented for the past three decades was a symbiosis with nature, that reason now only accounts to two percent of the answer».

The dilemma did not exist up until the late 1900s due to the presence of the railway and the increase in the number of people moving from the suburbs to the city and tourism. Paris had become an overly populated site and brands started to open, becoming a shopping center causing more traffic. «Between the 1970s and today, it was only in the last fifty years that Parisians have started to distance themselves from the avenue». Philippe Chiambaretta points out that with the city’s large population creating greener areas is not only purposed for aesthetic values but it also means creating new job opportunities and investments. «Paris is a mineral city. One of the capital cities with the least number of green spaces in comparison to London, Milan or even Vienna. We wanted to create something not for the rich and famous nor fast foods for the suburbs, but trying to find something that is inclusive; between poor and rich; between men and women; between public and private. Where there was segregation or a sense of domination in the past has to be overcome and that’s the spirit of this project». Creating a community with a positive social health entails more than just awareness, action is needed; «There is a strong discontinuity between different natural spaces, you have the Tuileries Garden that used to be the garden of the King comprising of twenty hectares of garden elegance with about fourteen million people visiting it every year. Life is about connecting and we want to connect people with the surrounding nature in order to make it desirable through our proposal in re-enchanting the Champs Elysées, or as the Mayor of Paris puts it ‘jardin extraordinaire’, adding culture in the green areas, temporary constructed food kiosks in the promenade without blocking the environment».

Opting for natural based solutions to fight climate change

Cities pose a threat to the world’s climate crisis attesting to two thirds of the world’s greenhouse gas emissions – opting for natural based solutions must be considered. «A city will remain a city, an urban forest is a good concept but only in a few cities the natural space allows you to do so and it is not the case in Paris. You have to work on the five strata; nature being one, mobility, zero carbon cars and building carbon conscious buildings. Nature on its own is not enough; you need to incorporate all city elements together». Since the rise of the pandemic, the environmental crisis that we are facing has turned to being the protagonist of its own story; it has led us to do a number of things differently in terms of wanting to create a more equal and generous city with its relationship with its environment. «Because the pandemic is still persevering, it is going to have a permanent effect on our psychology the more we understand how negatively we have affected the environment we live in and try not to go back to the way it was before and to earn from it. You have to be an activist in the topic. Denying it is not an option anymore and there is science and rationality that comes behind». The architect concludes, «there is still time to go backwards and revert the direction. If Paris can do something exceptional, tomorrow Madrid or Milan can do that too. We want to be a good example to other cities, anything you can do that could be considered inspiring and word-spreading should be done».

PCA-Stream, founded by Philippe Chiambaretta, is an architectural studio located in Paris, France. Dedicated to shedding light on the symbiosis between thinking and doing, Integrating novel ideas into their designs and that time-forward and sustainable. The architectural agency consists of a multidisciplinary team ranging from architects, urban planners and designers to researchers and publishers.