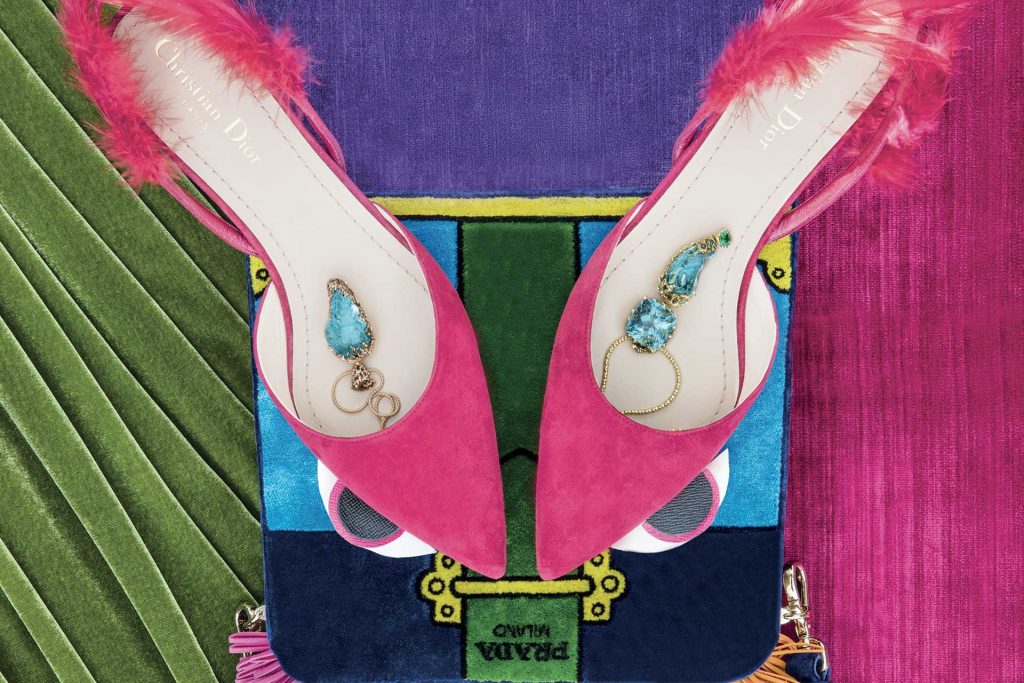 Mrs. Billie Achilleos, a visionary: «I see things in things. A different form of the puppet show. Like the puppeteer can bring a puppet to life, I can create a character without having to move it»

Sitting on the ground, engaged in the art of making things. In fact, ‘the of things’ – is her definition. A debut in theatre, where you made puppets and marionettes. «I did it for a couple of years at the Blind Summit Theatre, besides Christmas window dressing. I make things for the pleasure of it. It took me some time to get used to being called an artist». You have a distorted view of reality, objects are pieces of lego to be assembled in order to make something else. «I see things in things. A different form of the puppet show. Like the puppeteer can bring a puppet to life, I can create a character without having to move it. It might seem naive but it is my view of creations».

Your animals are famous. «I would like to be able to create figures of people but every time I try it’s a disaster. Perhaps because I have lots of friends who can do it well and comparing myself to them depresses me. I would like to fall in love. It’s time (she is thirtytwo Ed.), or maybe I need a new challenge. I think I am suffering from artist’s fatigue. Until today, I have tried to take people’s breath away. I hope to rediscover art for art’s sake again rather than art as a job». How did it go with Louis Vuitton? «It was 2009, when a friend of a friend called me, asking me if I wanted to create six animals, which ended up being twenty. I had never touched fashion before then, which is why I had absolutely no problem making holes in expensive bags. A fan of Louis Vuitton could never have done it. I still thank that woman for seeing potential in me, otherwise who knows where I’d be now». The bags are building blocks and collection pieces. «I am the least fashionable person I know. The only designer things I have were gifts from Louis Vuitton, and from Smithson, or are second hand. Vintage jackets from my aunt Mary’s boutique she had a shop in the Eighties  and other used jackets from charity shops. In Essex, where I live, everyone dreams of owning a Vuitton bag».

Leather. «I used it for such a long time that it bores me a bit now. At the end of college, I was mad about wood, perhaps I should go back to carving it. I bought a welding machine for working metal. I have recently moved to a studio community in Harlow. There is a glass blower there, a smith and a carpenter. I’m going through a period in which I need to rediscover the fun side of work». Today is a good time. «This project is different. I am always asked to create animals and this time I liked the idea of a change. The challenge: I don’t have much time and I can’t cut up any bags, so I’ll put eyes everywhere and I’ll create characters». Eyes on me. «In sculpture lessons they teach you to add the eyes last, because that is the moment the work comes to life. The photographer’s lens adds another dimension».

Conjugating the verb to make. «When I am given a box, I have to make something with it. I just make, I don’t think. It is not such an artistic concept. I feel energy in that moment. I’m not good at touching up or perfecting. What I have created today is a natural process: giving an object character». You should call your works by name. «Giving them a name would imply the objects are more important than they really are» – and if they came to life? «That would be a dream. Sometimes I look at them and wish they would start moving and walking. I would like people to see the folly in what I create. I think that a pinch of madness is missing from photography of accessories, bags and shoes should have fun like models do». A visionary that looks at objects but sees something completely different.

The magic place. «The forest. Epping Forest, it is close to where I live but I haven’t explored all of it. I can still get lost there. I like hunting for mushrooms. I’m fascinated by the fact that one day they’re not there, and the next, somehow, they just appear. I like their shape, their color». You could be Lewis Carroll’s granddaughter. «Last week I was looking for inspiration and I made myself go to the Tate Modern even though I never thought I could find my kind of conversation in art. My heroes are film characters, marionettes and animation. Patrick Woodroffe – I have had all of his books since I was a kid, is the craziest illustrator around. Terry Gilliam has the craziest ideas. The adventures of Baron Munchausen are my obsession». Your energy. «I have to alternate a work I create because I want to, with a commissioned work. Socializing is vital; I always have a part time job, in a pub or a supermarket, to get inspiration. Being alone in a room for a week does nothing for me. I need to meet people to keep my creative engine running. The smell of secondhand books, antique shops. I can’t resist coffee table books».

A pair of scissors will save the world. «How can one live without it? Once I was going on holiday, and at airport control they stopped me because of the Leatherman (the Swiss penknife, Ed.) in my bag. I went back to check in my bag, though I risked missing the flight». Art attack – have you ever had an in controllable urge while staying in front of an object with a scissors in your hand? «I had just one and it ended up in a heart attack: when there was the umpteenth terrorist attack in London, at Borough Market – I was distressed; I had worked at Borough Market for a while. That night I couldn’t sleep, I was thinking about activist art and street art, which I had never done. At midnight I left the house with a bundle of cloth and I covered the city with the slogan We stand together. It’s not an original phrase, but I’m not a writer: I wanted a typical phrase, one we use here in England, to drum up strength. That night, when I got home, I had my first Addisonian crisis and ended up in hospital».

Spot on: O&O par Margherita Marzotto. The Santa Maria collection is a tribute to the Neapolitan sculptor Gianlorenzo Bernini. The gemstones ‘hunted’ in Madagascar by the two brothers Ollone, Barthelémy and Melchior, are kept in their original state, with a gold setting designed by Margherita Marzotto: «In the forest of Madagascar, I imagined a light, sensual sculpture, delicately revealing the naked body of the stone, like lingerie. I model the gold raw, waiting for the moment of its metamorphosis. Inspired by Bernini’s Daphne, I imitate the sharp freshness of the foliage: the nuggets of gold dotted with diamonds merge and envelop the pure surface of the stones, just like the nymph is captured by the vegetation».

Billie ​Achilleos is an artist working within many disciplines and ​has been a puppet, prop and set​ builder ​since 2006​. Her specialty areas include model making, moulding and casting, foam and textile fabrication, wood carving, paper engineering and metal work.​ In 2010 she was given the opportunity to create a collection of sculpture made from luxury brand Louis Vuitton’s leather goods. This commission identified her flair for ​reconstructing iconic products to create humourous and ​eye-catching sculptures. In 2017 she expanded this skill to working with food to create a series of heads for an advertising campaign for supermarket chain Aldi in Germany. Billie Achilleos works regularly in the field of retail display, having designed and made original pieces for John Lewis, Watches of Switzerland, Coach, Louis Vuitton and Smythson of London.