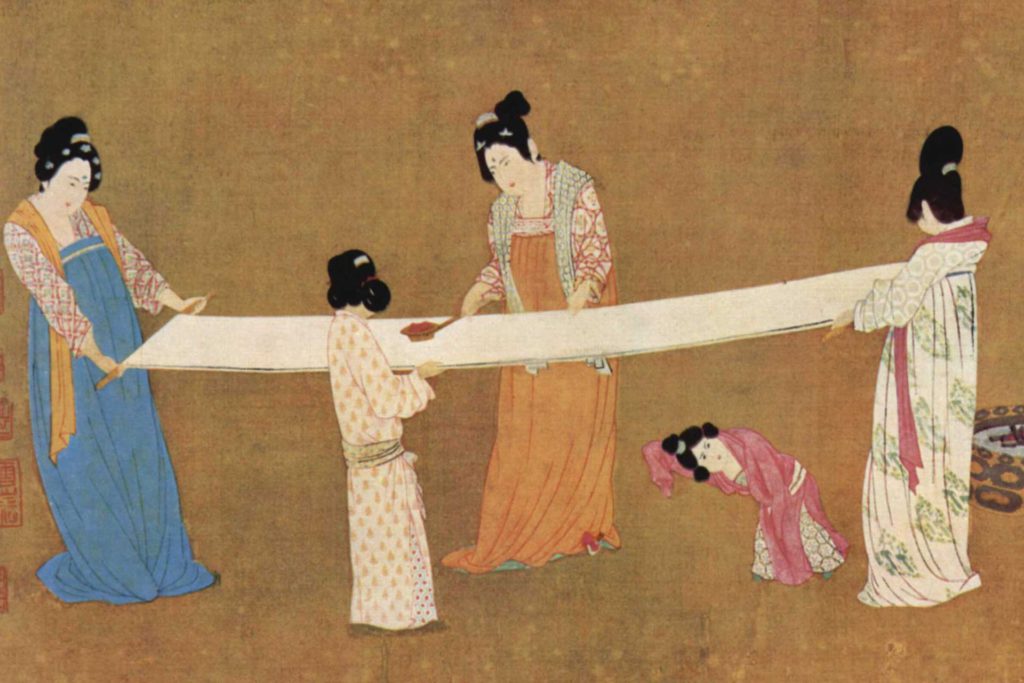 Why silk production at an artisanal level creates a circular economy

«An array of solar panels, connecting us to the same source that has been powering the Khmer people for generations». In conversation with Golden Silk

The impact of the industrialization of silk production

By definition, sustainability refers to a balanced production system and assuring that our generation’s needs are met without compromising the quantity and quality of the resources for future generations. Silk is fully degradable, corresponding to the requirements imposed to be considered as a sustainable raw material. Silk production on a general level is an example of a circular economy. It was given as an example of such a system at the first International UN conference on agroecology; a term referring to the analytical and experimental study of biological, ecological and social processes that influence agro-cultural systems. The cultivation of Mulberry in particular represents how natural processes can result in a circular economy. The Mulberry feeds the silkworms who subsequently produce organic waste and residues. The waste is high in natural proteins which can be used as feed and forage in aquaculture fish farms. The organic material found in the ponds can then be used as natural fertilizer for cultivating Mulberry trees, finishing off the cycle. On the opposite side: compared to other textiles though, sericulture — silk-making — has a higher environmental impact. The industrialization of silk production demands energy and agroforestry to keep up with the amount of silkworms needed to produce mass quantities of silk. This includes keeping controlled temperatures, huge amounts of water for Mulberry plantations and chemically dyeing the fibers. In the past silk production was part of agricultural systems in many cultures, known for its affordable ways of production and respectful use of resources.

Lampoon report: Golden Silk, a Cambodian NGO and one of the last producers of golden silkworm

After founding the Sovannaphoum Komar Village in Battambang in 1992 to house orphans, Sophea ‘Pheach’ Oum, felt she needed to start helping out the women of Cambodia as well. Working with orphans and refugees around the area, Golden Silk is a Cambodian NGO which was founded in 2002. Based in Siem Reap province, the association focuses on rediscovering the Khmer craft of silk production whilst simultaneously preserving an endemic species of silkworm: Bombyx mori polyvoltine, more commonly known as the golden silkworm. This species has nearly disappeared from Cambodia altogether due to its low yield – nearly 15 times less than white silk. The cocoons are smaller and more delicate, prohibiting any mechanization in its process, which is what makes it less attractive to producers. «Especially in the North West region of Cambodia, money does go into the silk sector, but it’s not focused on protecting this endemic species because they depend on the yield. It’s about quantity», said Oum. Golden Silk is one of the last producers of this type of silk, merging its rarity with the Khmer techniques of silk-making to produce these unparalleled textiles. Oum: «Our energy is generated by the sun through an array of solar panels, connecting us to the same source that has been powering the Khmer people for generations. We rear the silkworms through mulberry leaves which are grown on our own farm and nourished by natural fertilizer to keep the soil pure. We produce our own pigments for dyeing the silk, while sourcing the raw materials locally».

Silkworms rely on Mulberry leaves as their food source. Currently, about 45,000 Mulberry trees are spread around the Golden Silk site, maintaining a natural ecosystem, increasing and fortifying the level of biodiversity.  Although the association bans any type of chemical treatments and fertilizers to be used on the Mulberry tree plantations, it is anyhow scientifically proven that using pesticides and other processes can decrease the yield of the cocoons bred and might potentially cause death of silkworms. It takes around forty-five days for the worms to be ready for harvest. Once in a cocoon, the silk is extracted in two steps. It is boiled once to remove the first layer of silk which is rougher. The remaining cocoon is then transferred into another pot of boiling to extract the finer silk. «In all of this, around 30% of the silk we get is fine silk. Sometimes we are lucky and we can get 40%», said Oum. For 2.2 pounds of silk, about 33,000 pounds of Mulberry leaves are harvested to feed the worms required for the 2,200 pounds of cocoons needed for the silk. The amount of resources used can seem excessive, but the method in which these resources are used encourages sustainability. In the fashion industry, waste is one of the most notable factors negatively impacting the environment. Golden Silk produces one piece items, primarily shawls and scarfs, producing no offcuts. All the silk which is woven results in a single piece which can be worn directly. In parallel, Oum is aware of the energy which is required at an industrial level of silk production. «Our production is not at an industrial size. It is not the same concept, we are artisans handcrafting art. We don’t use machinery. We keep to the traditional; using ancient techniques, using local wood and bamboo. We use solar energy to power what we need». Mulberry trees produce less during dry seasons and would entail a lot of water supply to keep up with its demand. Golden Silk does not water their trees, relying solely on nature’s cycle to produce its resources. Watering the trees needed to produce a constant amount of silk year round would require much water and man-power, all of which is unavailable to Golden Silk given its size.

Reviving ancestral knowledge while providing an income for orphans and refugees

Golden Silk employs around 100 people, eighty percent of them being women. Oum has dedicated the association to preserving the ancient art of Khmer silk making by offering a ten-year training program, paying their students to learn this artisanship. The steps taken to produce this type of silk contain intricate techniques, many of which were left to be rediscovered completely. One of the more complex techniques which Golden Silk focuses on is called, ikat. It is a textile design process which requires the threads of silk to be dyed before being woven together, demanding careful planning and skillful preparation. «It’s a complicated technique which is disappearing from Cambodia», explained Oum. The demand for it was in the hands of a limited portion of the Cambodian population «because in ancient times, the Khmer way of producing silk was only obtained by royalties to wear». The final result resembles an embroidered piece with comparable 3D patterns. «For the past twenty years, Golden Silk has been working on reviving the ancestral knowledge of Khmer silk-making, which had been lost for centuries. Spun by worms and fashioned for kings, centuries ago, master artisans used yellow silk to dress the Khmer Empire», explained Oum. «Its rarity comes from its delicate nature and limited supply, resulting in the creation of a velvety texture and natural pearly glimmer, hard to replicate with other types of silk. Golden Silk maintains this proud heritage by taking inspiration from stone carvings of Angkor Wat temple and nurturing the endemic silkworms».

The dyeing process relies on natural pigments. Golden Silk primarily uses roots, tree bark and fruits found around its site. «We collect the fruit that comes from centuries old trees surrounding the temple. We collect them at different times of the year to yield different colors, which results in a wider variety». A type of larvae, Cochineal, is used for red dye. The energy required to undergo the dyeing process is minimal. The resource used for the color is boiled in water for a couple of days, condensing it to allow the saturation levels to rise. Once the silk fibre is added, it can take only half a day to complete the process. Some of the resources used as color are even put back in the environment. «Once we finish using a particular piece of tree bark for the dyeing process, we take the soil and stick back onto the tree, cover it with water, and then it grows back again. This is how you protect the trees without destroying them», explained Oum. Silk production at an industrialized level can create issues for the environment given the amount of resources it requires; a lot produces little. Keeping it at an artisanal level with sustainability and safeguarding traditions in mind, the production of silk can be beneficial environmentally, economically and socially. Working with the cycles of nature and not using up extra energy to yield more, this type of production can remain environmentally friendly. Silk has a long history and is part of many people’s heritage. Preserving traditional techniques in silk-making enriches people with their own culture, being able to generate a steady stream of income by learning forgotten craftsmanship.

A Cambodian NGO based in Siem Reap. It offers a selection of fine and rare silk products adapted to customers’ demand. Working with the endemic species of silkworm found in the area, Golden Silk works with women to rediscover the ancient techniques of Khmer silk-making. Golden Silk provides employment opportunities to former orphans from villages and people living in the surrounding areas of the Preservation Center.