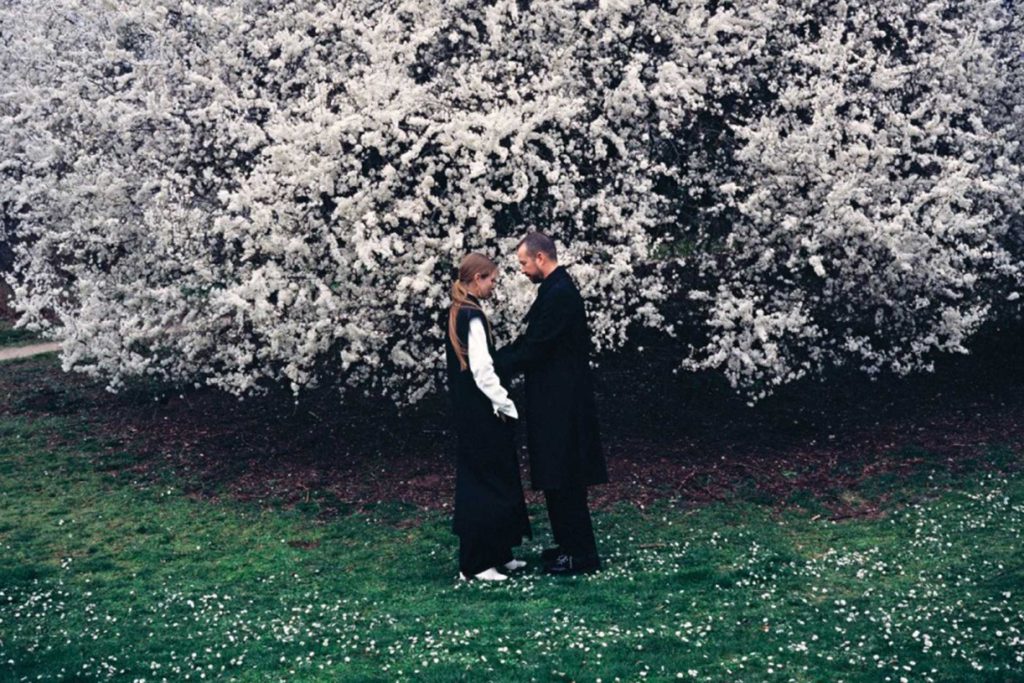 Lucie and Luke Meier: why they make statements rather than asking questions at Jil Sander

A reflection of the duality between introspection and self-expression, Jil Sander’s Fall Winter collection experiments with new themes and motifs as Renzo Rosso buys the brand

Jil Sander Fall 2021 debuted with a short film directed by the house’s content collaborator, Stephen Kidd. Paris’ Le Marais offers an apt location for the presentation, being both one of the oldest districts in the French capital as well as a contemporary neighborhood today. Shot at an hôtel particulier that was ‘under construction’ at the time, the scene is set for a season that fuses the past with the future, via a disquieting yet hopeful present. Guided by Lucie and Luke Meier, joint creative directors at Jil Sander since 2017, Kidd captures six models as they traverse the abandoned townhouse. Through close-up shots and grainy zooms, the models are largely filmed solo: they do not walk with each other and they sit on their own despite sharing the same space. The effect is one of isolation, with the viewer assuming the role of voyeur; their awareness of being alone-but-together heightened due to recent circumstances. The building’s walls and sparse set continue this sense of juxtaposition – this time between old and new – extending a metaphor that is present throughout the composition of this collection. British-German musician Anika carries on the film’s dichotomous feeling with a synthy original score set against her voice. The lyrics suggest that watchers «Forget what’s going on / And forget just for one moment». While the lo-fi, blurred focus of the presentation and colors evoke a surreal quality for the audience, it remains difficult to disconnect this collection from the context of the ongoing pandemic. The neutral pastel color palette, use of vegan leather and styling with unlined gloves perhaps feel more ‘clinical’ than the ‘clean’ lines associated with Jil Sander. Despite subconscious references to our current state, the lines of Jil Sander remain. The tailoring of compact wool jackets and coats, cut straight or with an accentuated hourglass shape, the bias cut of lingerie-inspired dresses and the shirt dresses offer a nod to the house’s characteristic minimalism. Yet the hand-spun dresses with fringing detail, delicate plissé silk dresses and use of refined fil coupé jacquard also suggest a tactile sense of touch which feels fresh. Here, as in all the Meiers’ work at Jil Sander, touch plays the same role as sight. The way they achieve this is through craftsmanship and a choice of materials and design techniques. By employing these components, the Meiers shine a light on the discord between the stoicism of the past and the warmth or intimacy associated with our post-pandemic future.

The new era at Jil Sander

«Don’t be surprised» sings Anika as the film goes on and the models continue to walk alone through the building. Despite this signal, the collection is peppered with unexpected elements. Large-scale monochromatic butterflies and Bauhaus geometrics as well as colorful floral silk trousers and shirts offer unusually offbeat print and pattern choices for Jil Sander, while bold pops of lilac, raspberry and mustard stand out against the largely natural-hued color palette. Accessories include doorknocker earrings and bauble-like handbags, with natural pearls of different shapes and dimensions forming necklace-cum-plastrons to offer further experimental styling details. Footwear is also exaggerated: over-the-knee boots with metallic finishes of silver or copper, some adorned with metal-encased crystals at the vamp, and strappy sandals with colored plexiglass heels. The result is a mélange of contrasting tactility, movements and silhouettes when worn alongside the clothing. The dissonance of these accessories coupled with the house’s minimalism shows a controlled use of design as a starting point for the Meiers’ aesthetic expansion at Jil Sander. A reflection of the duality between introspection and self-expression, the Meiers use this collection to play with and recombine fashion in a way that is at once unsettling but prevailingly uplifting. They amalgamate pattern, color and craft together to show that hard can fuse with soft, loud with quiet, old with new; offering a taste of what’s to come as Jil Sander enters a new era.

Jil Sander bought by Only the Brave

The Fall/Winter 2021 film comes to a close outdoors. There is a sense of regeneration, which is echoed by the fact that – as this collection came out – it was announced Jil Sander’s Japanese parent company, Onward Holding, would be selling the house to Italian luxury conglomerate, Only the Brave. Owned by Diesel founder, Renzo Rosso, Only the Brave has a portfolio that includes Marni, Viktor&Rolf and Maison Margiela. Luke Meier worked as the head designer of Supreme and is also the co-founder of OAMC, while Lucie Meier previously worked at Louis Vuitton and Balenciaga before joining Dior as interim creative director with Serge Ruffieux between the tenures of Raf Simons and Maria Grazia Chiuri. It is worth noting that the butterfly – arguably one of the more surprising print choices from this collection – is a symbol of rebirth for some Christians and Native Americans. Just as this unexpected graphic made its way into the house’s final season under Onward Holding, it seems that the Meiers are ready to embrace the experimental elements they introduced in this collection in a bigger way as they move forward under their new ownership. The butterfly is a signifier of what’s to come.

Since the eponymous founder’s first departure in 2001, Jil Sander changed hands multiple times before Luke and Lucie Meier took over as joint creative directors in 2017. The husband-and-wife duo have built upon Jil Sander’s minimalist signature aesthetic while reinvigorating the house with their own unique twist. Their Fall/Winter 2021 collection is no different, with a short film directed by Stephen Kidd showcasing an experimental narrative of post-pandemic regeneration.